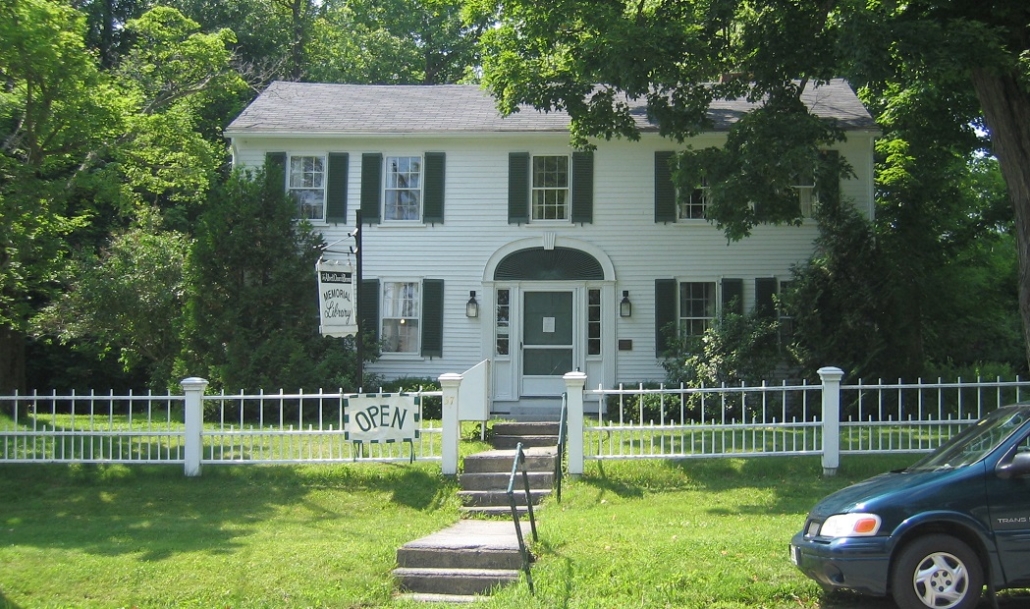 Librarian Carla Olson Gade opened the program by reading a poem by Maine author and Vassalboro native Holman Day, and closed it by reading summer resident Richard Dillenbeck’s contemporary reminiscence of the China Village grammar school, which stood on the lot across Main Street from the library.

Marjeanne (Banks) Vacco said she, too attended the village school, four years behind Dillenbeck. Both transferred in the spring of 1949 to the new consolidated elementary school on Lakeview Drive, now China Middle School.

In the 1940s, China Village’s business district was at the south end of Main Street, around the intersection with Neck Road and Causeway Street, Vacco said. Because she lived just down the hill in the house at the corner of Peking and Causeway streets, she could stop at the grocery and spend a nickel for an ice cream cone on her way home from school.

Mention of Peking Street reminded former China resident Isabelle Wiand of a story told her by the late Louise Tracey, who lived at the intersection of Canton Street and Neck Road: Tracey once received her pension check months late, because it came via China in Asia. Several other people remembered similarly delayed mail, some in envelopes with markings in Chinese.

Neck Road resident Louisa Barnhart talked about her house, built around 1827, one of several on Neck Road built with bricks from a kiln in the area of Fire Road 9. When she and husband Michael Klein needed to repoint the brickwork, they found sand from a Fire Road 9 pit created an exact match for the original work.

On the back of the house is a 17-foot-square room that used to be a separate building. It was made from recycled timbers, with saplings for a roof, so Barnhart believes its woodwork is even older than the main house.

The house has been owned by three families in almost two centuries, Barnhart said. It was in the Ward family for many years and owned for about 10 years by Bill Rollins before Klein and Barnhart bought it.

Vacco, whose family was connected with the Wards two generations back, added that the former schoolhouse in front of the brick house was moved to Vermont. Lilacs mark the site of the former school privy, Barnhart said.

The afternoon’s other main speaker was Tom Parent, President of the China Library Association and an Eagle Lake native who will have lived in China for 37 years next month. Growing up in The County, he said, every fall schools would close for potato-picking month and his entire family would move to the potato fields around Fort Fairfield.

There they would live in what he called a shack and pick potatoes from sun-up to sun-down. Parent compared their situation to being a migrant worker today, except that the whole family took part.

Pickers had two choices, he said: most picked on their knees, and often developed knee trouble later in life, while those who chose to stay on their feet & bend down were likely to have back trouble. Many pickers wore braces on their swollen wrists.

When the weather was uncooperative Parent said poker was the indoor fall-back. “I earned more money playing poker than I did picking potatoes,” he claimed.

Pickers earned 12 cents a barrel when he first went into the fields, Parent said. The price had more than doubled, to 25 cents a barrel, by the time he was in his early teens. Each barrel held about 200 pounds of potatoes.

A good picker could do more than 100 barrels a day, Parent said. One of his brothers filled 165 barrels one day.

Money from the work paid the debt at the local grocery and provided school clothes and supplies. And, Parent said, children brought up in the potato-picking culture developed a good work ethic that lasted a lifetime.

He also mentioned that while towns like Eagle Lake were mostly deserted during potato-picking season, no one locked doors, and families would find their possessions untouched when they came home.

The next public event planned at the Albert Church Brown Memorial Library is the annual candidates’ forum to introduce candidates in contested local elections to voters. This year, five people seek three seats on the Board of Selectmen: incumbents Ronald Breton and Janet Preston and Blane Casey, Brent Chesley and Jeanne Marquis.

The forum date is not yet set. In past years, it has been in late October in advance of local elections, which will be Nov. 3 this year. Plans are to have the forum available to the public over Zoom, Gade said. Notices will appear on the library website, www.chinalibrary.org, and elsewhere.

The library reopened Sept. 8 with coronavirus precautions and slightly changed hours. New hours are Tuesdays and Thursdays from 1 to 5 p.m. and Saturdays from 9 a.m. to 1 p.m.