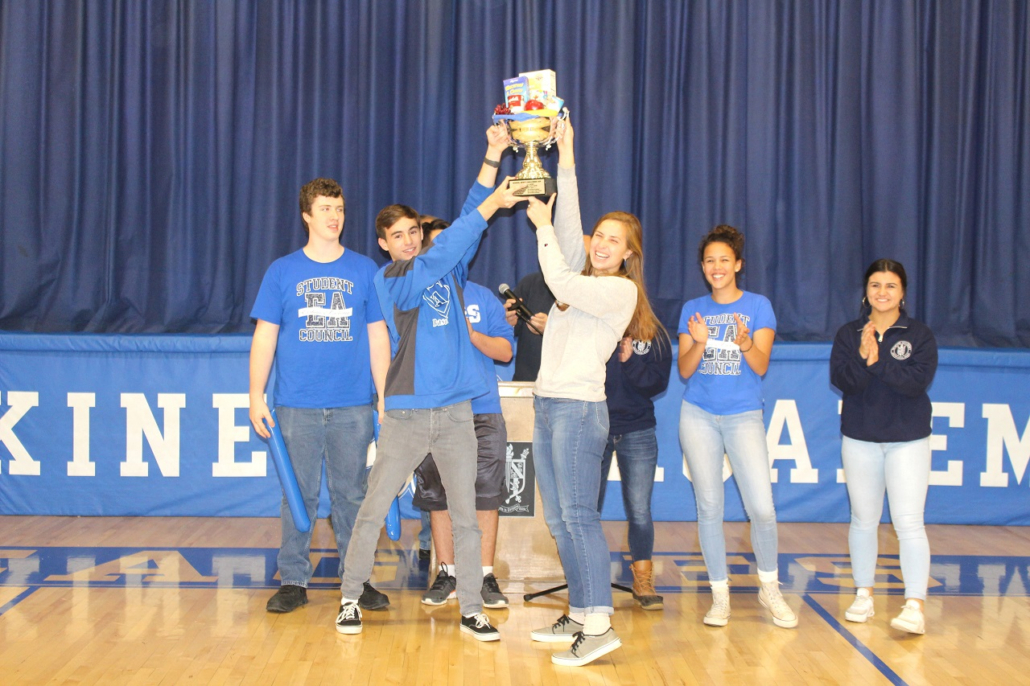 Erskine Academy students celebrate by showing off their trophy for winning the School Spirit Challenge Tournament of Champions by raising a record-breaking 196,969 pounds of food. (Contributed photo)

Beginning in September, Erskine Academy, in South China, committed to a challenging mission to once again to collect food and funds to support the Good Shepherd Food Bank of Maine (GSFB) by participating in WGME13/Fox23’s School Spirit Challenge Tournament of Champions. The School Spirit Challenge (SSC) is a friendly competition between schools to show school pride and spirit, all while helping the community, according to a news release from Erskine Academy Headmaster Michael McQuarrie.

The program is designed to promote the school community and good stewardship with students of high schools in central and southern Maine through an eight-week food drive to benefit the Good Shepherd Food Bank and local food pantries.

This was the second time Erskine participated in the School Spirit Challenge, the first being two years ago, an event which they won handily over the other participating schools thanks to the efforts of many students, parents, alumni, businesses, and friends.

In 2016, Erskine was the School Spirit Champion for having raised nearly 85,000 pounds of food, an amount exceeding the total raised by the second and third finishers combined. Given this accomplishment, the school entered this tournament of champions with confidence. However, since the other competing high schools, also past champions, were all south of Erskine and have larger school enrollments, the collection goal was set at an ambitious 100,000 pounds of food.

Always up for a challenge and a worthy cause, the campaign was kicked off during the school’s homecoming in September. In attendance were WGME 13 anchor Jeff Peterson and representatives from the GSFB and the sponsors of this year’s SSC. The morning kicked off with students arriving at 5:30 a.m. for a tailgate breakfast served in exchange for their food donations.

The campaign continued until November 2 and was a bigger success than the academy ever imagined. The Erskine community pulled together collecting food and monetary donations and supporting the many activities to support the Challenge. Events included “Fill the Bus” with returnable containers, the Fly Like an Eagle 5K Run/Walk, Trivia Night, Trunk or Treat, Open Mic Night, and a dodgeball tournament. Off-campus activities included an EA Parents Food Drive Challenge. An online appeal went out on social media, and many generous donors gave through the Good Shepherd Food Bank’s virtual food drive.

Erskine Academy won the competition handily by far exceeding its goal. Erskine raised a record-breaking 196,969.25 pounds of food for The Good Shepherd Food Bank, which is over twice the amount that any of the 60-plus competing schools has raised in the five years and ten seasons of this competition.

About this accomplishment, Headmaster McQuarrie says, “The School Spirit Challenge was for a great cause, and through it, our community engaged in collective problem-solving and activism as we made a significant difference, at least for a time, in the fight against hunger in Maine. We demonstrated, and others witnessed, the dynamism of EA’s values—stewardship, leadership, and relationships—at work. The work ethic, inspiration, and idealism of our young people, in particular, are humbling and heartening.”

In the coming weeks, the school will continue to recognize and thank the many individuals, including alumni from across the country, businesses, and organizations for their generosity and goodwill that aided the effort, strengthened the school community, and fed many hungry people in Maine.