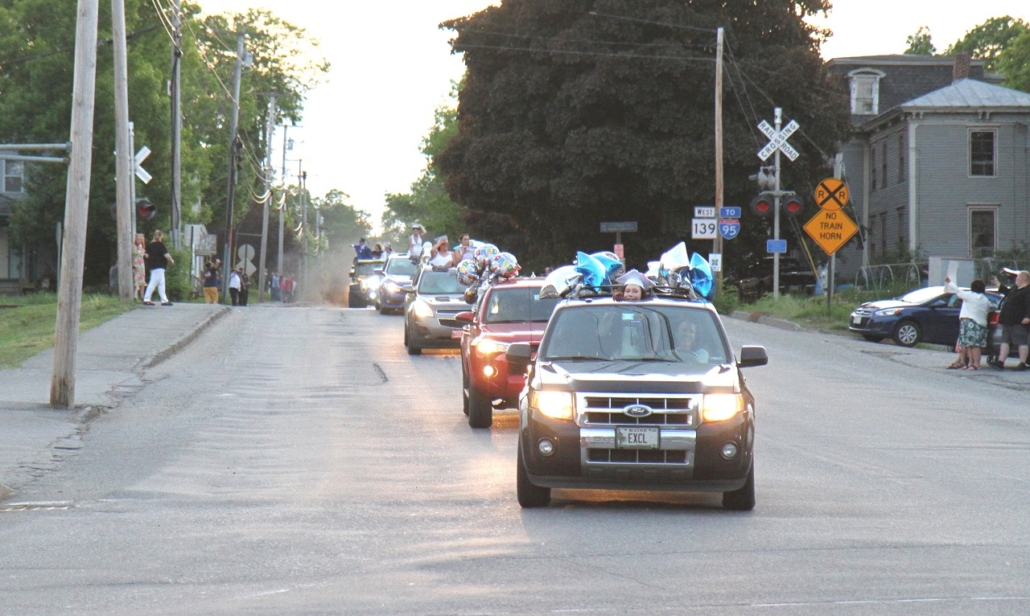 Graduates from Lawrence High School celebrating with their parade. (photo by Tawni Lively.) 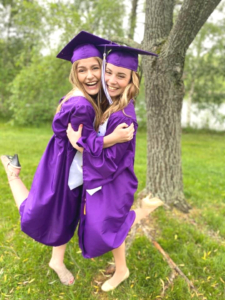 Typically, the first two weeks of June is the graduation season in central Maine. This year was no different, except that due to the coronavirus COVID-19 pandemic, things were done a little differently.

In Winslow, their graduation was held on June 10.

The graduates and parents participated in a procession of cars around the high school with fire and police vehicles leading the way. Supporters and well-wishers lined Danielson Street to celebrate the occasion.

Senior class secretary Riley Loftus and class president Jake Huesers both stressed the positives in their graduation addresses.
Both pressed the importance of what has happened over their collective school careers, and not to what the pandemic has taken away from them.

School principal Chad Bell also spoke about lessons graduates could take from this extraordinary experience. Bell emphasized he told seniors they would have a special graduation ceremony for them. The key points in his speech were about “positivity and perserverance.”

Bell was also impressed with the success that was achieved in pulling off this year’s graduation ceremony. 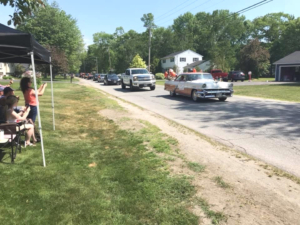 Above left, Winslow High School parade as it winds down Frankwood Drive, in Winslow. (photo by Kelley Bernard)

Following the distribution of diplomas, with students back in their vehicles, graduates were led in the traditional transferring of their respective tassels from one side of their caps to the other, signifying they were now Winslow High School alumni.

On the following evening, June 11, the Waterville High School seniors and their parents took to the streets of Waterville for an impressive parade from the high school to Central Maine Motors Chevrolet-Buick auto dealership, on Kennedy Memorial Drive, many in convertibles or standing through the vehicles’ sunroof, for their graduation festivities. Most of the students video recorded along the parade route. The motorcade left the high school, proceeded west on Western Avenue to the intersection with First Rangeway, where they turned left and headed south toward Kennedy Memorial Drive, horns honking, and the blaring sound of the sirens from Waterville police cars, fire trucks, including the ladder truck, and rescue unit. Supporters and other family members lined the parade route.

Upon arriving at the dealership, cars were lined up in the lot. Speakers included principal Brian Laramee, and the featured speaker, retiring faculty member Scott Rivard. With the formalities completed, seniors approached the stage in groups of 10, to receive their diplomas.

Again, being led by Class of 2020 president Lauren Pinnette, the graduates, in keeping with long time traditions, transferred their respective tassels from right to left, a symbol they were now Waterville High School alumni.

The final act of the night, which lent itself to a touching finish, came when all the faculty members lined both sides of the Airport Road, waving goodbye to their graduates.

The graduation was made possible through the generosity of Central Maine Motors owner Chris Gaunce and his family, and many volunteers.

I’M JUST CURIOUS: What to write about Give Us Your Best Shot! for Thursday, June 18, 2020
Scroll to top