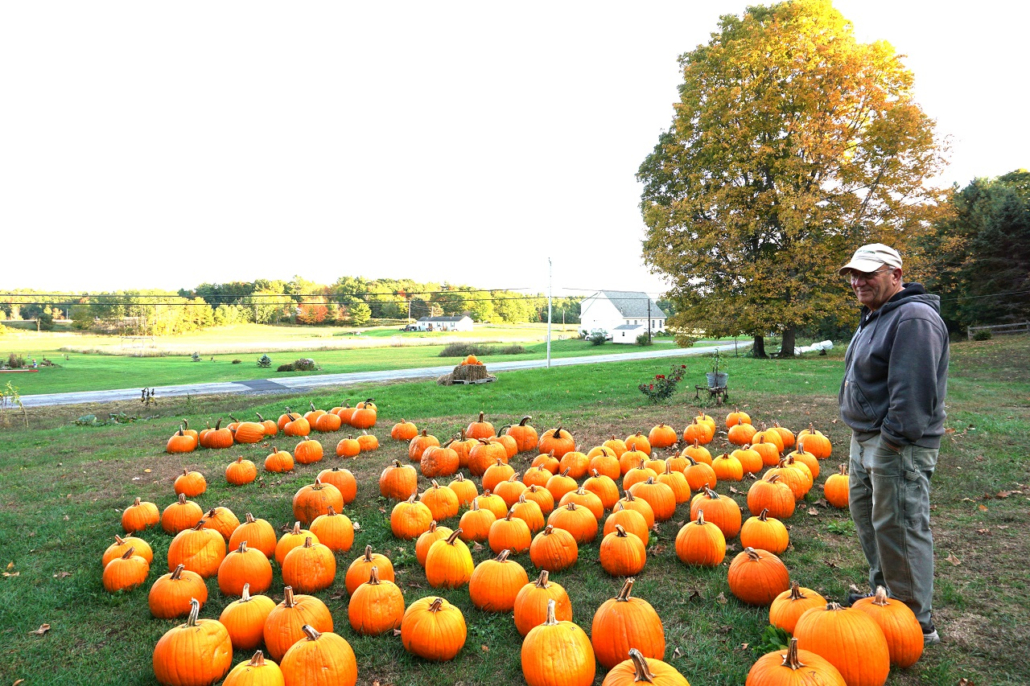 Fred Nassar has been growing pumpkins for over 20 years on his Garland Road farm, in Winslow. He also has a 10-minute walk through the haunted woods to the pick your own patch. (Photo by Isabelle Markley)

Halloween is coming, and if you haven’t found the perfect pumpkin there is still time to stop at a roadside farm stand or pick your own site and cross the orange gourd from the shopping list. There are pumpkins small enough to be carried by a young child or so large that it may take more than one person to load it into the car. Some pumpkins are giants requiring a fork lift to move them. The giants are often seen at summer agricultural fairs where growers compete for blue ribbons and the title of largest official Maine pumpkin. Check the Maine Pumpkin Growers Organization’s website for the weight and the grower of each season’s top pumpkin. The site is also a resource for seeds and information on how to grow giant pumpkins. Currently the 2017 title is held by a 1,756 pound pumpkin grown by Elroy Morgan, from Charleston.

During the 2018 Windsor Fair’s giant pumpkin/squash weigh in, South China resident Carrie McGrath placed fifth in the adult pumpkin class with a white pumpkin weighing 57 pounds. It was grown from seeds given to her by friends. McGrath and her husband James, own the McGrath Farms on Lakeview drive, in China, where they grow strawberries and pumpkins. “I just threw the seeds at the edge of the garden. I didn’t do anything special except to cut off the smaller pumpkins leaving only the big one on the vine,” she said during a phone interview. Her 37-pound entry won first place in the Jack O’ Lantern division. Also winning ribbons in the adult division at this year’s Windsor Fair were pumpkins weighing 931 pounds grown by Richard Powell, of Nobleboro; 363 pounds grown by Quincy Perry, of Damariscotta; 130 pounds grown by Cody Wood, of Jefferson, and 63.5 pounds grown by Bette Barajas, of Windsor. 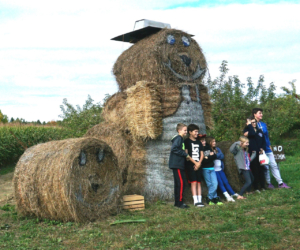 For a pick-your-own adventure go to the Haunted Pumpkin Trail on the Garland Road, in Winslow. Drive past the Albion Road cut off and continue until you come to a lawn filled with pumpkins of all sizes. The trail begins behind a tent-covered pumpkin display, leads downhill through trees decorated with ghosts and witches and ends in an open field. Pick your pumpkin; stop at the hay bale “take your photo here” spot; carry the pumpkin back through the woods to the tent at the trail’s start and find the price by placing your pick against a row of white paper plates showing sizes and prices. “The trail is free and open during daylight hours,” said farm owner Fred Nassar, the trail’s designer. “I’ve been doing this for 20 years. It’s a place where families can come for an adventure close to home.”

Test your sense of direction by walking through the corn maze ($3 per person or $10 per family) at the Lemieux Apple Farm, on the Priest Hill Road, in Vassalboro. The level dirt path between rows of towering corn stalks leads in circles with several escape exits along the way. Stop for a photo in front of the gigantic hay bale bear and then take a tractor pulled wagon ride into the orchards to pick your own apples. End the adventure with pumpkin and apple doughnuts from the farm stand inside the barn.

Sample fresh pressed cider and apple cider doughnut holes in the barn at the Apple Farm, on Back Road, in Fairfield. Then visit the processing room behind the barn to watch some of Maine’s oldest apple varieties – McIntosh, Northern Spy, Golden Russet, Pearmain, Winter Banana – being blended and bottled for a cider taste that is distinctive to this farm. On the weekends take a horse drawn wagon ride, through the orchards. Borrow an apple picker (a metal basket on a long pole) from the barn and head into the orchard to pick your own apples. Or try your aim at the “apple sling shot” to see if you can hit the pumpkin target at the end of the shooting range.

And if you just want to buy a pumpkin, check out the side of the road stands on Route 32, in Vassalboro; Ben and Molly’s Spooky Pumpkin Patch, on the Hansen Road, in South China; Bailey’s Orchard (pumpkins and over 50 varieties of apples in the barn), on the Hunt’s Meadow Road, in Whitefield; or County Fair Farms (wagon rides through the apple orchards on the weekends), on Route 32, in Jefferson. There is still time to find the perfect pumpkin for decorating the front steps, carving into Jack O’ Lanterns or baking into a homemade pumpkin pie.

FOR YOUR HEALTH – Tips For Tailgating: Add A Little Healthy Balance Give Us Your Best Shot! Week of October 18, 2018
Scroll to top