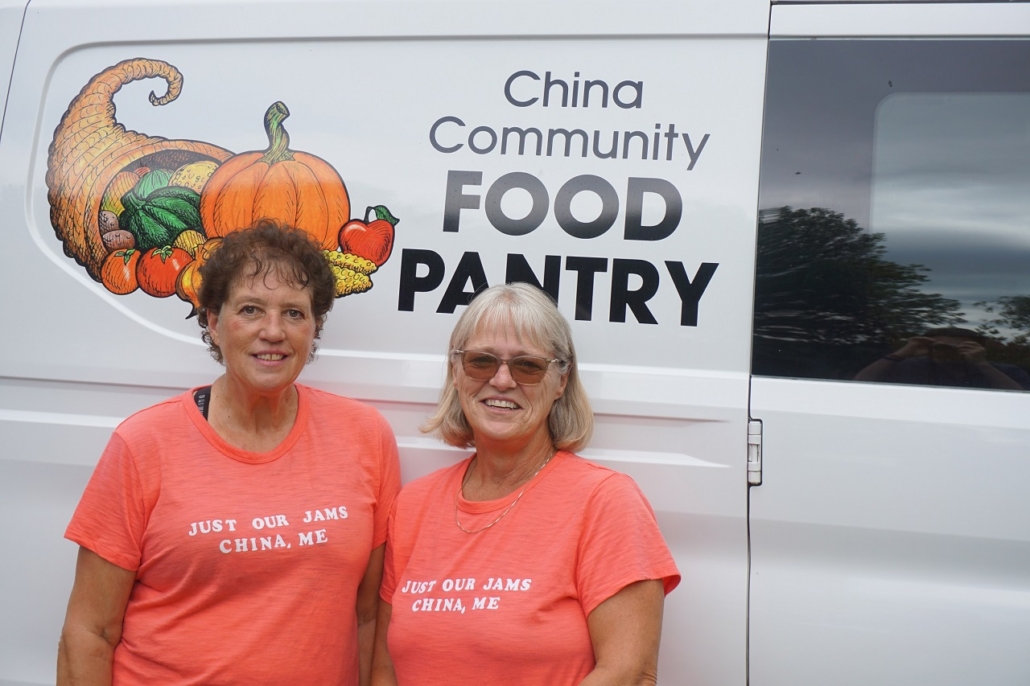 Can strawberry jam save the world? Two local women think it can. Luanne Webber and Cindi Orlando, both from China, have started a venture called “Just our Jams” to help raise money for their local food pantry. The initiative aims to repurpose leftover fruit from the China Community Food Pantry to make jam, which they sell at events around central Maine. All profits are donated back to the food pantry. In just the last few months, they’ve raised more than $1,400.

Ann Austin, director of the China Food Pantry, says she’s blown away by their success. “It’s really amazing what they’ve done,” she says. “We’ve been able to replace two of our older freezers. That’s going to help reduce future electric bills, which is one of our biggest expenses.”

The two local ladies were looking for a way to give back to their community when they came up with the idea. Last winter, at the start of the pandemic, they became involved in several community efforts. Working with the China for a Lifetime Committee, they sewed more than 500 masks for local residents and school children. They also began cooking soups and meals for the elderly and delivering food boxes from the pantry to residents who could not leave their homes. But it was when they began volunteering for the China Community Food Pantry that their eyes were opened.

“The first day I volunteered,” says Orlando, “I went home with a whole new respect for these people.”

“We only saw it at the end, when we picked up the [food] boxes and left,” adds Webber, “but to be included from the beginning to the end – it was exhausting!”

Although the food pantry is only open from noon to 1 p.m. on Fridays and Saturdays, work for pantry volunteers extends far beyond those hours. Donated food needs to be picked up and delivered to the pantry for marking and sorting. Floors have to be swept and counters cleaned, and since the pandemic, food boxes must be prepared before the pantry opens.

“We started seeing how much fruit was left at the end of the day,” remembers Webber. “There were buckets and boxes.”

Often, food is donated to the pantry because it has reached the end of its shelf life. The food that is too far gone for human consumption is removed and given to volunteers who live on homesteads with farm animals. Nothing ever goes to waste, but Webber and Orlando saw a way to repurpose some of the leftover fruits and vegetables to further support the work of the pantry. They began taking home some of these supplies to make jam.

The first event they attended was a bit of a disappointment. It was a vendor’s fair in Waterville and they only sold eleven jars of jam. Next, they set up at the Olde Mills’ weekend farmer’s market in Vassalboro, selling 30-40 jars. It was there they met one of the organizers of the Taste of Waterville event and were invited to attend. This was their big breakthrough. They sold more than 150 jars of jam and were interviewed by a reporter for a story about the event from the Morning Sentinel. A few weeks later they were featured in a segment on WMTW Channel-8, a local ABC News affiliate.

Word was getting out. 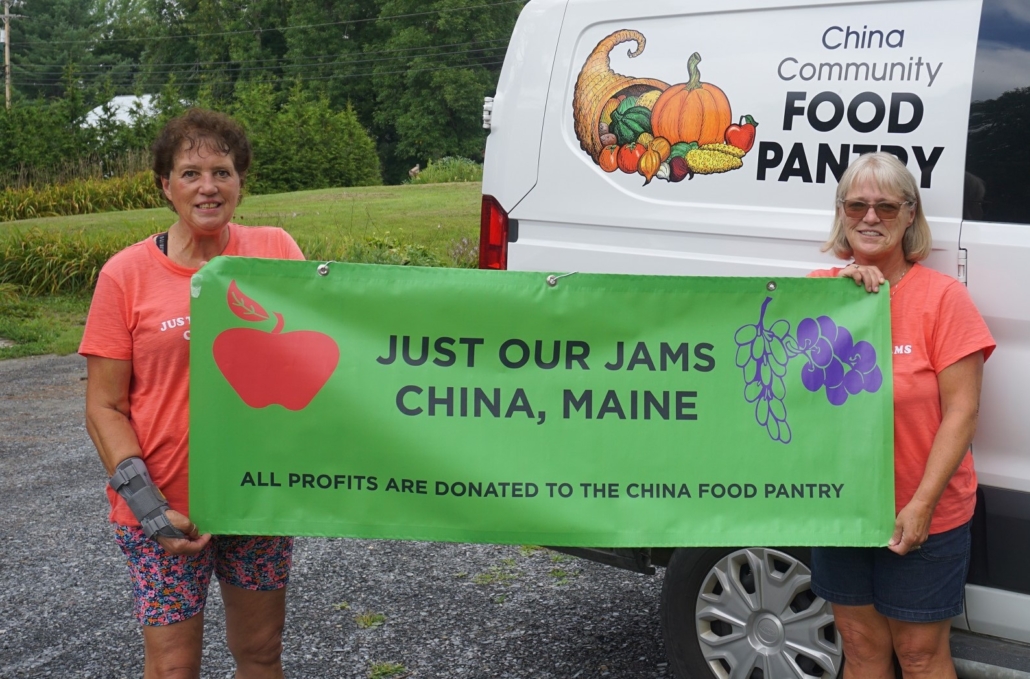 Since then they have had a booth at the recent China Community Days festival, where they raised another $400, and this coming weekend, September 10-12, they will be attending the Vassalboro Days celebration.

The personal history of their friendship is also an interesting one. Both grew up in a small town in Rhode Island called Scituate, attending the same school and church, before moving to the nearby town of Pascoag. Then life happened and the two drifted in different directions.

“I disappeared,” says Orlando. “I moved to Maine.”

“When you’re raising your kids, time gets busy and you lose track of so many people because you’re so involved. That’s what happened,” affirms Webber.

Cindi Orlando moved her family to Maine in 1987 and pursued her career, in between parenting, as a chef. Eventually, Webber made her own way to Maine, moving to Madison. Then, a little over five years ago, Orlando bought a house in China. A year later, unbeknownst to Orlando, Webber and her husband also relocated to China. They lived several years without being aware of each other, but then, two years ago, they ran into one another at the Hannaford store, in South China. They hadn’t seen each other for 30 years.

At the time, Webber’s husband, a disabled veteran, was very ill. He passed away six weeks later. “She really needed me to walk into her life at that time,” says Orlando, “and we’ve been together ever since. We just work together on things. I helped her through the loss of her husband, and we repainted both of our houses inside this winter. We’re just busy people. We like being busy, and that’s when we said we’ve got to start volunteering. Being retired, sitting at home is just not our thing. So, we did this. We thought this would be a good cause.”

The ladies do a lot of experimentation to come up with their jam flavors. “Our number one bestseller came from necessity,” explains Webber. “We had an overabundance of pineapple and an overabundance of jalapenos.” That resulted in their jalapenos-pineapple jam, a fan favorite. “It also has carrots in it so it has a lot of body to it,” she says. “Put that over cream cheese, or over Brie. Put it on salmon or pork chops as a glaze.”

“We make 32 different kinds, or about that,” says Orlando.

“We lose count,” admits Webber. “When we get a fruit – like recently we were inundated with peaches – we try to come up with every concoction we can for peaches, so we have a peachy-orange marmalade, a peach and mango, a ginger peach butter, a bourbon peach and a plain peach.”

“What we make, you cannot buy in stores,” points out Orlando.

All of their jams are low sugar. A selection of their jams are available at McGrath’s farm stand, in South China, (next to the school), but their jams will never be available in stores. As a not-for-profit business, they get by with a home-kitchen license and a vendor’s license that lets them sell at local events. To sell in stores would require them to upgrade to a commercial kitchen license and they have no plans to go pro.

“We will never go commercial,” says Webber. “Neither of us wants a fulltime job.”

Those interested in supporting their work can order jam by contacting them through their Facebook page, via email at justourjams@gmail.com or by text at 401-486-0076, or through the China Food Pantry at 968-2421. Jams sell for $7 for an 8 ounce jar, or $12 for 16 ounce. If you are local, they will happily meet you in the Hannaford parking lot to deliver your order.

The ladies are also in need of donations of 8 and 16 oz canning jars, sugar and pectin (low sugar only). Donations can be dropped off at the China Community Food Pantry, 1320 Lakeview Drive in China Village.

Eric W. Austin writes about local community issues. He can be reached at ericwaustin@gmail.com.