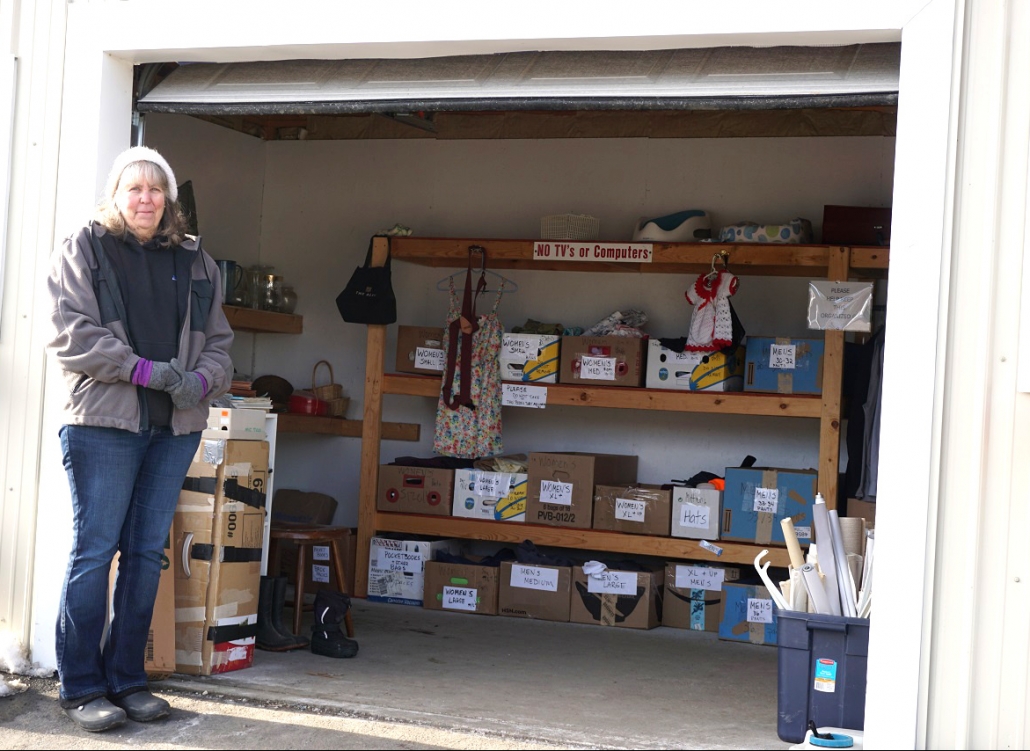 Karen Hatch stands outside the Swap Shop at the China Transfer Station. (photo by Eric Austin)

Walking into the Swap Shop at the China Transfer Station, you may find that you don’t recognize the place anymore. Gone are the disorganized piles of clothes, toys, tools and odds and ends with no apparent plan or place to stand. Instead, the small space has been arranged with a finesse fine enough to make a Macy’s manager blush. Books line the wall as you walk in, arranged by author. A T-shirt with the message “SHOP ‘TIL YA DROP” is pinned to the far wall. Boxes of men’s and women’s clothes crowd the bottom shelves, neatly labeled by size.

The change that has come over China’s Swap Shop is due to the hard work of one woman who saw an opportunity to make a difference in her community and took it. Her name is Karen Hatch, aka “Queen of the Swap Shop.” She’s a member of the China for a Lifetime Committee, a local group dedicated to exploiting volunteering opportunities in China. 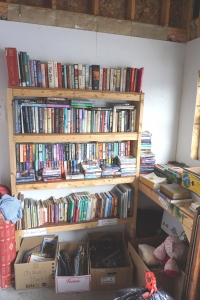 The Swap Shop has a wide selection of books, now arranged by author. (photo by Eric Austin)

“The first day was quite overwhelming,” Karen confides. “But day by day I got it organized.”

The Swap Shop was built roughly two years ago, according to China Transfer Station Manager Tim Grotton, who says it’s become a popular destination for local residents. “I bet there’s close to a hundred people that go in there on a Saturday,” says Grotton. “I’m amazed how many people use it. It’s pretty astounding.”

I met with Karen on a frosty Friday afternoon, one of the slower days at the transfer station. While we talked, half a dozen people dropped by. We added a box of brand new attachments for a sleep apnea machine, six jars of slightly rusty nails, a steady-light with camera attachment, and a pair of red suspenders. Everything found a place in the newly-organized Swap Shop. “It’s all about merchandizing,” Karen explains as she hangs the suspenders on a hook she had recently installed.

It’s certainly been a learning process for Karen, who retired in December 2019 after serving 27 years as childcare director for the city of Augusta. When she first embarked on this project at the beginning of January, she made the mistake of setting down her mittens. It was only for a minute, but before you could say, “Karen Hatch, Queen of the Swap Shop,” they had been re-appropriated. A few days later, she brought magic markers and masking tape to make signs for the shelves in the little building. She’d only made a few signs before they too magically disappeared! She tells me all of this with a shrug and a smile. If there’s one rule of the Swap Shop you have to remember, it’s that everything is up for grabs.

To the crew at the China Transfer Station, Karen Hatch is a godsend. With the heavy traffic the shop receives, keeping it organized is nearly an impossible task. “We just don’t have that kind of time to dedicate to the building,” says Grotton. “It gets to the point where [donations are] three feet high – with the clothes and stuff – and we got to go in and clean the whole thing right out.”

That has changed since Karen took over. “We haven’t had to touch it in three weeks,” Grotton says, clearly pleased with the change. And Karen is making it easier for Swap Shop visitors to find something useful. “A lot of residents use that place,” continues Grotton, “and she’s cut their time in half because everything is sorted. Everybody used to go in and pick all through the clothes and throw them on the floor. Now, they can go right to their size – it’s fantastic.” 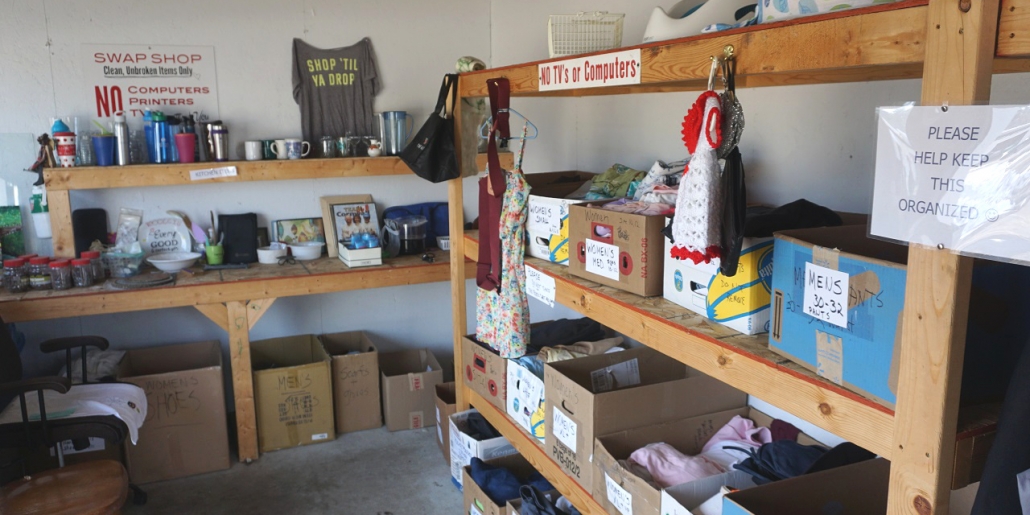 The newly-organized Swap Shop at the China Transfer Station. (photo by Eric Austin)

An efficient Swap Shop also saves the town money by diverting more items out of the trash stream. “A lot of the stuff that goes out of that building would go into a landfill,” says Grotton. Especially clothing. “We want to keep all the clothing that we can out of the regular hopper.”

To this end, the China Transfer Station has partnered with Apparel Impact, a “textile recovery company” that operates out of New Hampshire. According to their website, clothing makes up close to 10 percent of all trash in local landfills. They have four donation bins located around central Maine, with one of them here at China Transfer Station.

“Last year, we shipped out 6.2 tons of clothing [through Apparel Impact] that would have gone to the landfill,” Grotton says. But he tells me the Swap Shop puts that number to shame. “I’m guessing four times that amount goes through that building there,” he says, nodding toward the Swap Shop. That’s a lot of clothing that isn’t filling up our landfills.

Organizing the clothing as it comes into the Swap Shop increases its efficiency, but even with her organizational superpowers, Karen is just one lady. She’s at the Swap Shop on most afternoons, but she’s eager to find other volunteers, especially someone to monitor the shop in the mornings. If you’re interested in helping her out, send an email to ChinaforaLifetime@gmail.com.

Considering the Swap Shop’s popularity and money-saving success, Station Manager Grotton hopes to apply for a TIF grant that would allow him to add a few building improvements, including running power to the building. Not only would that allow them to install lights in the building, but visitors could then test items that require power before taking them home.

Whatever the future holds for the Swap Shop, Karen Hatch has found a way to make this little corner of China a more pleasant place to visit. Next time you drop by the transfer station, why not check out the Swap Shop and thank her for all her hard work? Maybe you’ll even find something to take home with you, as they say, “One man’s trash is another man’s treasure,” especially when there’s a woman around to organize it.

Eric W. Austin writes about issues important to central Maine exclusively for The Town Line. He can be reached at ericwaustin@townline.org.