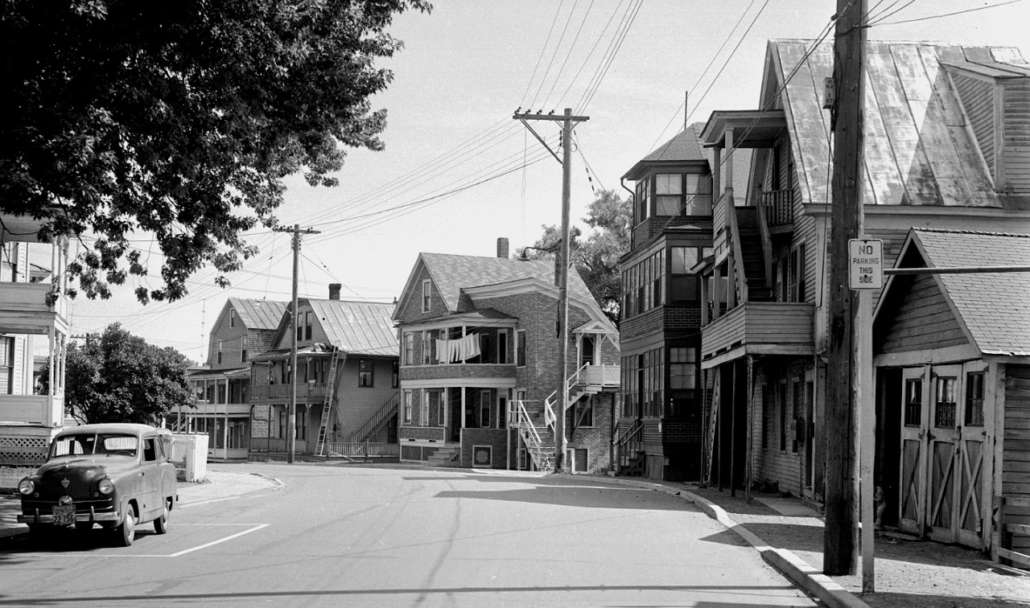 Water St. looking north. Notice the row of tenement buildings on the right. Those were built on the river bank, and were supported by stilts. They were removed in the 1960s and 1970s. (photo courtesy of
E. Roger Hallee)

This week, I’ll let Peg Pellerin tell her story about the cuisine on The Plains.

Cuisine down on The Plains

I have found Roland Hallee’s articles about The Plains (La Plaine) in Waterville so interesting, especially since I grew up there from 1952 to 1972. His renderings have brought back so many memories and some of those memories involved the foods we ate.

Most residing in that area were mill working families. Since most of the laborers were the men of the families, the mothers did their best to make paychecks stretch, especially when it came to groceries and meals.

The majority of the people living in that part of town were of French Canadian descent, which meant French Canadian cuisine. I can still remember the aromas coming from the homes in the area, giving away what my friends were having for “souper” (pronounced soo-pey), the French terminology for supper.

A lot depended on what day it was even to what time of the year it was. The largest meal of the week was made on Sunday. What was left over was eaten during the week. I remeber my mother baking or boiling jambon (ham) (pronounced jean-bon) with carrots and potatoes. She would use the ham bone with some of the meat still on the bone and make “soupe aux pois” (pea soup). It was not a favorite of mine but I ate it because it was what my mother put in front of me. The choices of meals back then was take it or leave it, or go without. We never went without because we ate it.

Crèpes weren’t just eaten for breakfast. In fact it was more of a supper for my family than a morning meal. For those who aren’t familiar with this yummy food, it is a very thin pancake. We’d put loads of butter and
maple syrup on it. (Roland’s two cents: my mother would make them for breakfast. We’d put a line of brown sugar, roll them into a cigar-like shape, and put maple syrup on top.)

Another stretch of Sunday meal was taking leftovers of roasted chicken or turkey and making “ragout” (pronounced rag-goo). Some folks call it chicken and dumplings but it was mostly the poultry in a thick gravy with dumplings. We’d scoop it over mashed potatoes or bread.

Mom would make a roast of both beef and pork with potatoes and carrots. She’d purposely include more potatoes than she knew we’d eat because she intended to take the meat and grind it, then mash the potatoes and combine all with onions and place in a pie crust and, voila, tourtière. (Roland’s two cents: Our mother would grind the meat with the potatoes and onions and make a hash. I liked to put ketchup on mine.)

Most, including myself, usually make it around Christmas time, but mom made it often during the year. She would also take leftover pork and make creton, which is like having a pork paté, which was usually spread onto bread for a sandwich or spread over crackers.

Whatever my mother made, we’d never know that it was an inexpensive meal. It was a treat. Besides having beans and franks (Roland’s two cents: Don’t forget the pickled beets) on Saturday nights, which was primarily a Yankee tradition since the Civil War, (we also ate many non-French Canadian meals, too). Mom would cut potatoes in thick strips, fry them and pour gravy over it. Yup, that in itself was supper. Many now know it as “poutine”. We never had the curds put on it and to this day, I won’t eat it with curds. My most favorite inexpensive meal was “gallettes”, a/k/a fried dough. We would walk to Veteran Court, which was several streets away from ours and go to Bolduc’s Bakery, where anyone could go in to purchase baked bread or, in my mother’s case, uncooked dough. She’d fry pieces of it and while still warm pour maple syrup over it. YUMMY! (Roland’s two cents: One of our favorite desserts was a slice of bread dipped in molasses. Of course, mother’s “ice box cake”, for special occasions, was the best of all. Graham crackers which were placed standing, with a chocolate whipped cream filling between the crackers, then covered with the cream. Everyone fought for the end pieces because they were the best. It was to die for.)

I will end this article with a mouthwatering treat; at least it was for us back in the ‘50s and early ‘60s. “Tire d’erable”, a/k/a maple taffy, but mainly it is thick maple syrup poured over fresh clean snow. It’s difficult to find clean snow, even when it’s fresh. I guess if you want something similar, make snow cones and pour maple syrup over it. It’ll be good but not as good as we had “back in the day”.