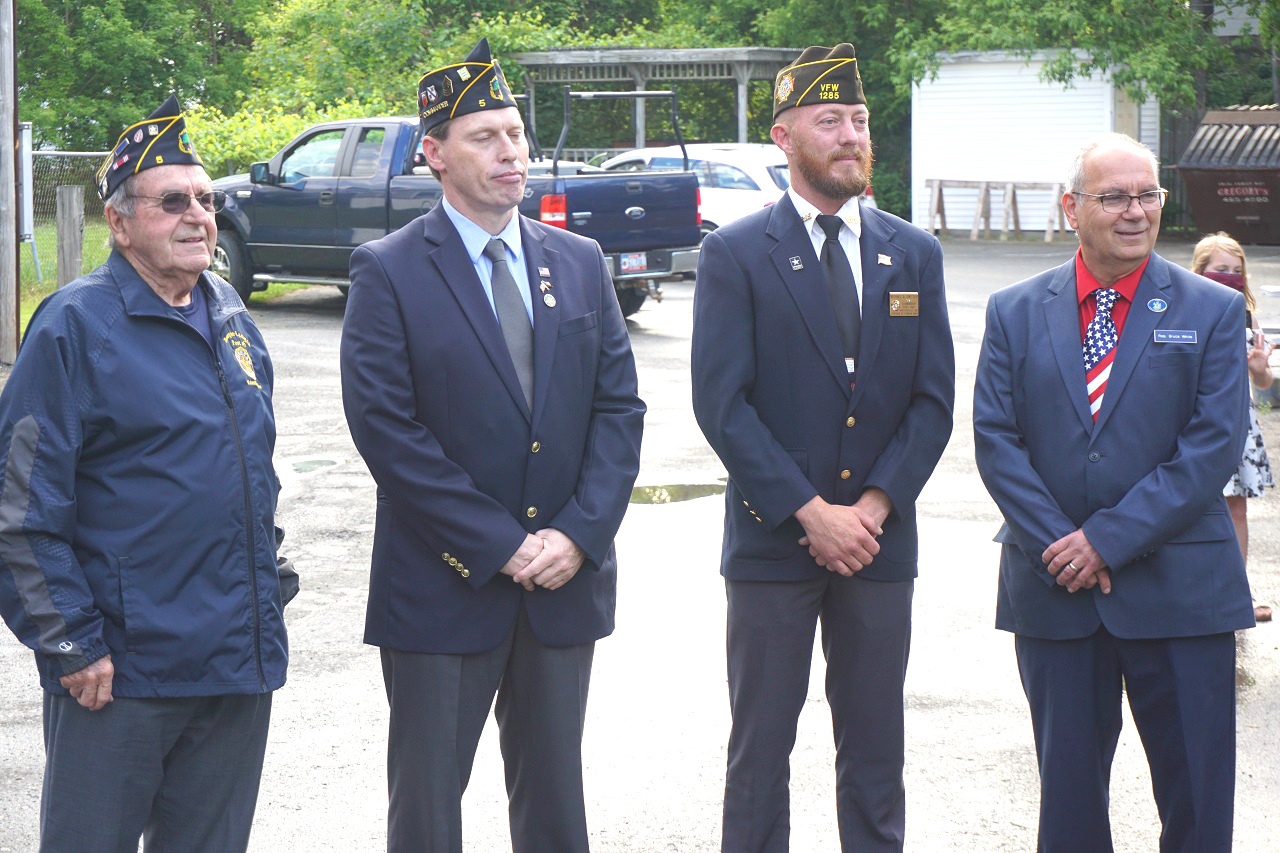 They say weather was one of the biggest factors in determining the success of World War II’s D-Day invasion on June 6, 1944. After a cantankerous month of May, meteorologists were pessimistic about fair weather for the invasion planned at the beginning of June. Without a break in the weather, planes could not see well enough to bomb German fortifications or drop paratroopers behind enemy lines; in rough seas, boats would have trouble navigating close enough to the beaches to drop off Allied soldiers safely. Many conversations and heated arguments were had between British and American forecasters about whether the invasion should go forward. 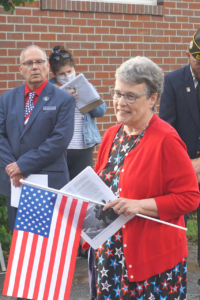 Left, State Rep. Bruce White, who organized the event, and his wife Doreen, who read the poem “Normandy.” (photo by Eric W. Austin)

Seventy-six years later, a small crowd gathered in a soggy parking lot at the Forrest J. Pare VFW Post #1285, in Waterville, to remember the bravery of Allied soldiers on that fateful day, and similar questions about the weather were on everyone’s minds. Similar to that June day in 1944, the weather wasn’t perfect, but it was “good enough,” and as they rang the small Liberty bell at the conclusion of the ceremony, the sun broke free from its cover of clouds to shine down on the gathering, as if to bless the assembled crowd and the cause of freedom they were celebrating.

The ceremony was part of the “Freedom Rings Global” event to remember the 76th anniversary of the Allied D-Day invasion, named “Operation Overlord.” It was the largest single-day operation in history and laid the foundations for the liberation of Western Europe from Nazi tyranny.

Waterville State Representative Bruce White organized the event after learning the story of World War II paratrooper Tom Rice, a member of the 501st Parachute Infantry Regiment of the 101st Airborne Division known as the “Screaming Eagles.” Last year, at age 97, Rice re-enacted his paratrooper jump over Carentan, Normandy, to commemorate the 75th anniversary of D-Day. The video of the jump garnered millions of views on social media and YouTube. Rice had planned to join celebrations in France this year, but was prevented from doing so because of travel restrictions related to the COVID-19 pandemic.

“Freedom Rings Global” was an event planned for 2020 in Rice’s honor as a way to remember that important day and the men and women who gave their lives in the fight for freedom. At 6:44 p.m. – a reference to the date of the operation: June 6, 1944 – people were encouraged to ring bells throughout the world as a reminder.

Here in Waterville, the event began with the Pledge of Allegiance, led by Waterville VFW Commander Michael Switzer. After a prayer by Subdeacon Steve Crate, of Saint Joseph Maronite Catholic Church, Rep. White spoke about his reasons for organizing the event. He said, in part: “We are ringing the bell in honor of Tom [Rice], and many others who sacrificed on this day 76 years ago. President Franklin Delano Roosevelt said, ‘This generation of Americans has a rendezvous with destiny.’ The young Americans of that time made up a generation marked for greatness, a generation that would take its place in American history. The American people understood the tremendous burden of the challenge before them, the need for unified national commitment, and most of all they knew that only one result is acceptable: victory. Our nation turned to its young to carry the heaviest burden – to battle against the enemy in the enemy’s own territory, thereby keeping the homefront safe. These young men and women understood what was required of them and willingly volunteered for duty…[On this day] we remember how many of that generation didn’t make it to their twenties, to their thirties and beyond. How many scientists, how many business leaders, teachers, politicians and spiritual leaders were lost in the greatest war the world has ever seen? Today we take a moment to remember them.” 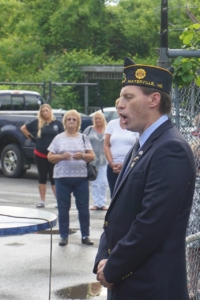 Craig Baily, the Com­mand­er of the Waterville Bourque-Lanigan American Legion Post #5, speaking at the event.

Craig Baily, the Com­mand­er of the Waterville Bourque-Lanigan American Legion Post #5, also spoke to the gathering. He said, in part, “Thank you all for coming out to remember this 76th anniversary [and] those … men and women that served to help free Europe from the tyranny of fascism from the Germans, to free France, and to free the Netherlands, to free Belgium, and to free all of Europe…It was a Herculean effort…to land [on the beaches of Normandy]…It is a testament to the will and spirit of the Americans who went there, the many who died… [and] the many who survived.”

Pearley Lachance, a chaplain for the Waterville American Legion and member of the Winslow MacCrillis-Rouseau VFW Post #8835, has been compiling information about Maine veterans for several years. He spoke about some of the local residents who served during World War II. “Before the war would come to an end, both in the Atlantic and the Pacific campaigns, over 16 million men and women served in uniform,” he said. “They were supported by those who worked in military industries at home. Over 3,000 residents of Waterville were drafted or volunteered. The sad part is, 60 of them did not return because they made the ultimate sacrifice. Waterville’s first causality was Arthur W. Lanigan, a sailor on the USS Houston, which sank when it was attacked by the Japanese on February 28, 1942 — but it was only after the war that it was determined he had died and was not taken as prisoner of war…In Winslow, over 700 were called, and 30 did not return. Joseph Janquist, a Winslow High School graduate, died in the attack on Pearl Harbor [on] December 7, 1941.”

Commander Michael Switzer then spoke briefly to thank everyone for coming.

Doreen White, wife of Rep. White, stepped forward to read a poem, “Normandy,” by Cyril Crain. By way of introduction, she said, “My dad quit school – Waterville High School – at 17. [He] had to get his parents’ permission. They reluctantly gave their permission for him to volunteer in the Navy. He wasn’t at D-Day, but he was a member of the Greatest Generation and served in the Pacific during World War II. I’m reading this poem with his memory in my heart. This poem is called ‘Normandy,’ and it’s by a young veteran who landed on Juno Beach:

‘Come and stand in memory
Of men who fought and died
They gave their lives in Normandy
Remember them with pride.

Soldiers, Airman, sailors
Airborne and marines
Who in civilian life were tailors
and men who worked machines.

To Juno, Sword and Utah
Beaches of renown
Also Gold and Omaha
That’s where the ramps went down.
The battle raged in Normandy
Many lives were lost
The war must end in victory
And this must be the cost
When my life is over
And I reach the other side
I’ll meet my friends from Normandy
And shake their hands with pride.’”

After the reading of the poem by his wife, Rep. White read a recent statement from Archbishop Timothy Broglio, of the Archdiocese for Military Services, USA: “It is good to remember that many nations participated in the D-Day invasion. Particularly, the U.S. forces were composed of men of different races, national origins, religious creeds, and so forth. In this time of tension, we ask Almighty God that their sacrifice not be in vain. We beg Him to transform our most earnest longings into a force for peace and understanding, to teach us to see every person as brother or sister whose Father is our God. We pray for the ability to negotiate, to talk, and to listen. We pray to remain vigilant against the forces of evil in our troubled world, and to pour our energies into building lasting peace and justice among nations.”

Rep. White then played a recording of General Dwight D. Eisenhower’s speech to the troops on D-Day. Here is that speech:

“Soldiers, Sailors, and Airmen of the Allied Expeditionary Force: You are about to embark upon the Great Crusade, toward which we have striven these many months. The eyes of the world are upon you. The hopes and prayers of liberty-loving people everywhere march with you. In company with our brave Allies and brothers-in-arms on other Fronts you will bring about the destruction of the German war machine, the elimination of Nazi tyranny over oppressed peoples of Europe, and security for ourselves in a free world. Your task will not be an easy one. Your enemy is well trained, well equipped, and battle-hardened. He will fight savagely. But this is the year 1944. Much has happened since the Nazi triumphs of 1940-41. The United Nations have inflicted upon the Germans great defeats, in open battle, man-to-man. Our air offensive has seriously reduced their strength in the air and their capacity to wage war on the ground. Our Home Fronts have given us an overwhelming superiority in weapons and munitions of war, and placed at our disposal great reserves of trained fighting men. The tide has turned. The free men of the world are marching together to victory. I have full confidence in your courage, devotion to duty, and skill in battle. We will accept nothing less than full victory. Good Luck! And let us all beseech the blessing of Almighty God upon this great and noble undertaking.”

Rep. White concluded by saying, “Father Patrick Finn is going to ring the bell at the church of St. Mark’s, in Winslow. Pittsfield’s MCI (Maine Central Institute) is ringing the bell, and…there are a thousand cities around the world that are doing this same ceremony.”

The Liberty bell rung at the event.

At 6:44 p.m., Waterville Fire Captain and veteran, Rodney Alderman, stepped forward to ring the small Liberty bell set up in the parking lot of the VFW to honor the brave soldiers that fought on the field of battle that fateful June day in 1944.