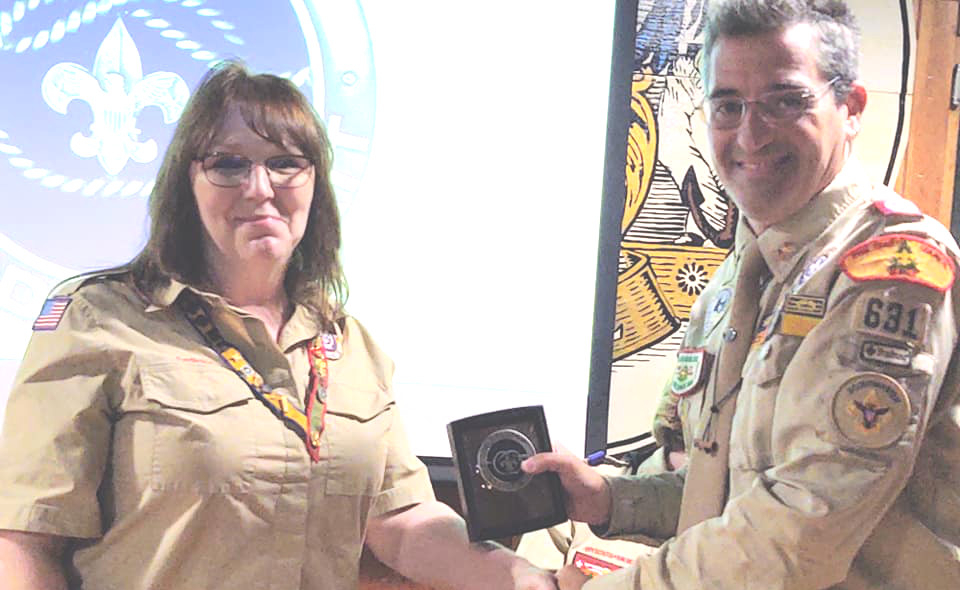 Russell Cahn, of Augusta, received the highest award a local Scouting District can bestow upon a volunteer on Saturday, September 25, when he was presented the District Award of Merit during the annual District Scouters’ Recognition Dinner held at Camp Bomazeen.

Cahn currently serves as Scoutmaster of Troop #631 at St. Augustine church but his Scouting career began when he joined Cub Scouts as a leader in New York Pack #349 where he served as Den Leader for Tigers, Wolf, Bear and Webelos dens. He was also Little League Coach from 2009-2014, in Forest Hills, New York. When the family moved to Maine, he and his family quickly got involved in Augusta’s Cub Scout Pack serving as Assistant Cubmaster and Den Leader.

When his son Tyler was old enough to cross over, Russel joined Troop #631, in Augusta, as an Assistant Scoutmaster and became Scoutmaster in 2020. Russell also served as the Cub Scout Rangemaster for Kennebec Valley District and served as Rangemaster for Pine Tree Council since 2017. Cahn teaches several merit badges and was a member of various Merit Badge Colleges. He also was a member of the 2017 National Jamboree Staff and the 2019 World Jamboree contingent.

Julie McKenney, Cub Day Camp Director at Camp Bomazeen and Kennebec Valley District Activities chairman, praised Cahn. “Russell’s knowledge from his previous unit in New York helped shift the way the Kennebec Valley District holds their Pine Wood Derbies. His guidance has molded the derbies into a far more enjoyable format for our Scouting families.” Cahn’s wife Tracy is a member and the chairman of the Troop Committee and their son Tyler is working on his Eagle Scout project. Both were present when the award was presented to him by District Advancement & Recognition Chairman Luanne Chesley, of Vassalboro. Cahn said, “Scouting allows me to share knowledge about the outdoors and the values of Scouting that they otherwise would not receive. Scouting gives them outstanding experiences that will help them develop into leaders.” 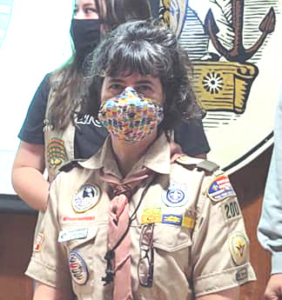 Also receiving the District Award of Merit was Heidi O’Donnell, who volunteers in Scouting with Camden Troop #200. She has been involved with both Girl Scouts and Scouting since her son Matthew was a Tiger Cub Scout in 2011 and her daughter Taylor first joined Girl Scouts. Both joined her at Camp Bomazeen to receive the award.

Matthew is currently working towards his Eagle Scout rank and Taylor has submitted her Gold Project award. Heidi has been involved at various levels of both programs and has also served on Camp Bomazeen staff and worked at several Merit Badge colleges. Like Cahn, she was a member of the 2017 National Jamboree staff and also attended the 2019 World Jamboree.

O’Donnell was co-trek leader for Philmont in 2019. Outside of Scouting, Heidi has been involved with the YMCA and was awarded its Volunteer of the Year in 2016. Heidi said, “I love being part of the scouting program – both Scouts BSA and Girl Scouts. It is my hope that my involvement in scouting has made a positive impact on many. I know it has had a significant effect on myself and my two children and I am grateful that they were both there to celebrate with me. I look forward to many more years in scouting and encourage others to consider helping to make scouting strong in their communities as it is fulfilling work on so many levels.”

John Wood, a long-time Scouting volunteer from Hope said, “Scouting has been this young lady’s life. She is well deserving of this award.”

District Chairman Joe Shelton, of China, said, “We are very blessed to have so many outstanding volunteer Scouting leaders in Kennebec Valley. They make this program happy and it is only fitting that we take the opportunity to recognize those who have given so much.”