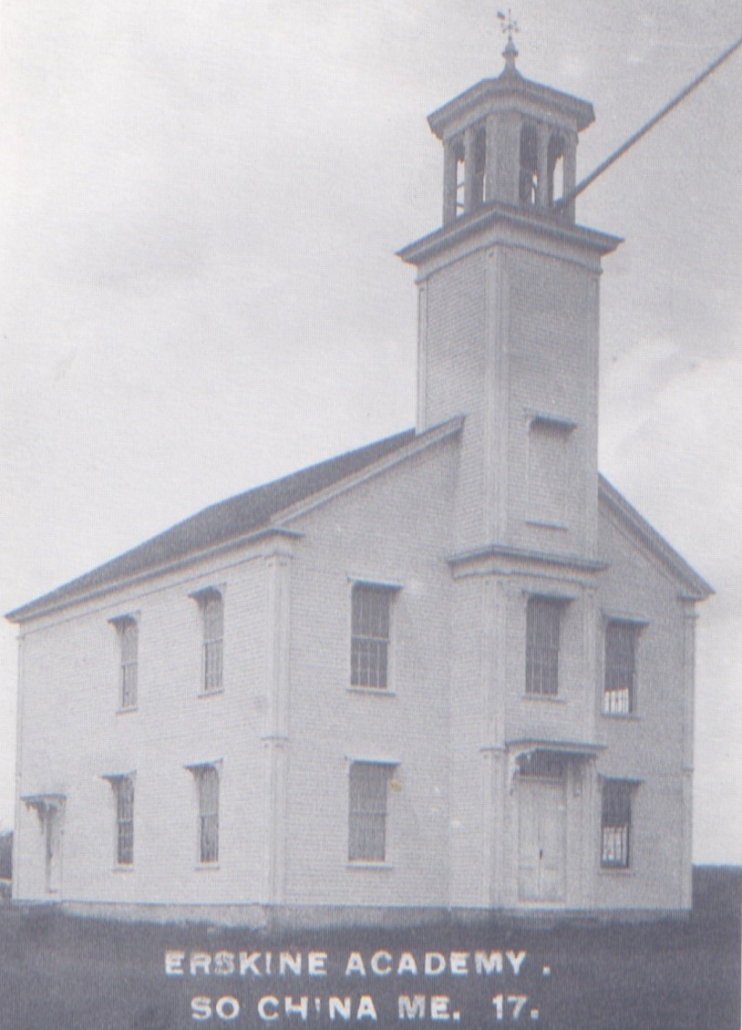 The Massachusetts legislature chartered China Academy in June 1818. Charter language quoted in the China bicentennial history is almost identical to the language used 50 or so years later for Hallowell Classical and Scientific Academy: purposes are to promote “piety, and virtue,” and to provide instruction “in such languages and in such of the liberal arts and sciences” as the trustees prescribe.

The school initially had five trustees, four China Village residents and Rev. Daniel Lovejoy, from Albion, father of Elijah Parish and Owen Lovejoy. Elijah and Owen attended China Academy, and Elijah taught there in 1827, after he graduated from Waterville (later Colby) College. In 1819, the Academy charter was changed to allow 15 trustees.

The first China Academy building was on the shore of China Lake, across from the present site of the China Baptist Church (built in 1814, relocated in 1822). John Brackett donated the land, “in consideration of the love and good will” he had for the trustees; the only condition was that they keep the fence around the lot in repair.

The trustees had a wooden building constructed; the bicentennial history says classes began in or before September 1823. The first two principals were Colby graduates.

In 1825 the Maine legislature approved a land grant for China Academy. In November 1829, the trustees sold the lot in what is now Carroll Plantation (on Route 6, in Penobscot County, east of Lincoln and Lee) for $3,400 (about 30 cents an acre, the bicentennial history says).

With legislative support and “an encouraging student enrollment,” the trustees put up a two-story brick building on Main Street, in China Village, across from the Albert Church Brown Memorial Library (that former house dates from about 1827 and has been a library since 1941). First classes were in November 1828, with 89 students.

From 1835 to 1844 China Academy did well, under Principal Henry Paine, the bicentennial history says. There were 221 students in 1835 and again in 1844, most from China but some from other Maine towns. Teachers included a Colby senior, a Colby graduate and at least one woman, Sarah A. Shearman, in charge of “instruction in the ornamental branches.”

School was held for four 12-week terms, beginning “the first Mondays of March, June, September, and December.” The history quotes advertisements in the weekly China Orb newspaper that said quarterly tuition was $3 for basic English reading and writing; $4 for advanced English courses; and $5 for “Latin, Greek, and French.”

The Academy had no dormitory. The history says it (trustees, teachers or both?) helped students find nearby places to board, at rates ranging from $1.33 to $1.50 a week.

After Waterville Academy was chartered in 1842 and organized successfully by James Hanson (graduate of China Academy and Colby College – see The Town Line, July 29) and Paine left China in 1844, China Academy enrollment dropped. By 1850, average enrollment was around 50 students. The Civil War caused a temporary closure.

After the war, the Academy reopened and, the history says, in 1872, “had a staff of five who were teaching 40 to 60 students a term.” Terms were “shortened to ten weeks,” and tuition increased to $3.50 a term for basic English, $4.50 for advanced English and $5.50 for foreign languages or bookkeeping. Music was added, 20 lessons for $10; the history does not specify vocal, instrumental or both.

The history lists courses offered, in a “four-year course sequence” in 1884-85: “English, math, geography, history, bookkeeping, sciences, and philosophy,” plus Greek and Latin “if requested.” There were two or three terms a year, and financial support came from the local school district, other nearby China districts and one district in Albion.

In 1887 the brick building was deemed unsafe and was blown up, scattering fragments of brick onto adjoining properties. The trustees sold the lot to the local school district. “Willis R. Ward built a wooden schoolhouse at a cost of $1,000 which served as both high school and elementary school from 1888 to 1909.”

The China Village free high school gradually lost students early in the 20th century and closed in 1908. Many students transferred to China’s other private high school, Erskine Academy (see below).

The wooden building remained an elementary school until the consolidated China Elementary School opened in 1949. It was sold and became a two-story chicken house. The building was demolished in 1969 and replaced by a house.

A China Village high school was re-established from the fall of 1914 through the spring of 1916 – the bicentennial history gives no reason. Classes met in the second floor of a building (later the American Legion Hall) on the southeast corner of the intersection of Main Street, Neck Road and what is now Causeway Road.

The China bicentennial history provides partial information on three other nineteenth-century high schools in China, in Branch Mills Village, in South China Village and at Dirigo.

The earliest, the East China high school in Branch Mills, “was established about 1851 in a building constructed for that purpose by Mr. Barzillai Harrington.” The building was on the south side of the village main street, west of the bridge across the West Branch of the Sheepscot River. It appears as a large rectangle on the town map in the 1856 Maine atlas, labeled “B. H. Academy.”

In 1852, the history says, elementary classes met in “Mr. Harrington’s high school building” because the district schoolhouse was “in such poor condition.”

An 1856 advertisement for the school listed Claudius B. Grant as the principal for an 11-week term beginning Sept. 1. Tuition was $3 per term for basic English, $3.50 for advanced English and $4 for “languages,” unspecified.

Though classes were listed in 1882 and 1883, the Branch Mills map in the 1879 Maine atlas identifies the building by a name, indicating it was a private home. The China history says the Academy building was sold in the 1880s. Henry Kingsbury’s Kennebec County history says it was in 1892 the Good Templars Hall.

A footnote in the bicentennial history adds: “In 1894 the school committee recommended a term of high school at Branch Mills, but the town records provide no evidence that it was held.”

The high school in South China Village started in the 1860s and ran at least intermittently through the spring of 1881, according to the bicentennial history.

In 1865, former primary school teacher T. W. Bridgham taught a spring high school term. In 1877-78, A. W. Warren was teacher for a seven-week term. F. E. Jones taught 51 students in the fall of 1880. The next spring, J. E. Jones taught what was apparently the final term, “with the expenses being borne by three adjacent school districts.”

The writer of the bicentennial history found only a single reference to the high school at Dirigo (or Dirigo Corner), where Alder Park and Dirigo Road meet what is now Route 3 (Belfast Road). In 1877 and 1878, the town report described two China free high schools, South China “and a 20-week term at Dirigo.”

Fred D. Jones was the teacher at Dirigo, “and the supervisor of schools commended the residents of this quite small school district for supporting so long a term.”

(Attentive readers will have noticed numerous teachers named Jones. They were probably related, at least distantly, and were probably members of the Society of Friends. The genealogical section of the China history has 25 pages of Joneses, several identified as teachers.)

Yet another private high school, Erskine Academy, opened in September 1883 and is thriving today. The China history gives a detailed account of its origins: it became a private academy because China voters at the beginning of the 1880s refused to accept donated money for a public high school.

As the history tells the story, Mary Erskine inherited her husband Sullivan’s considerable wealth when he died in 1880. Having no children, she consulted John K. Erskine, her late husband’s nephew and executor, about ways to use the money.

John Erskine, who regretted his own lack of educational opportunity, suggested endowing a high school in the Chadwick Hill school district, south of South China Village. Mary Erskine agreed, and at a Nov. 13, 1880, special town meeting, voters accepted a $1,500 trust fund for a free high school.

At the annual meeting in March 1881, voters reversed the decision and told the town treasurer to return the money. In March 1882, school supporters presented an article again offering the $1,500 and “specifying that the town would not pay for providing the school building.” Voters passed over it, that is, did not act.

A month later, a group of supporters asked the Erskines to let them establish a private high school. Mary Erskine approved and helped organize a board of trustees headed by renowned Quaker Eli Jones (see the July 8 issue of The Town Line). John Erskine was vice-president and Samuel Starrett treasurer.

The trustees “bought the seven-acre Chadwick common from A. F. Trask for $100.” (Wikipedia says the campus is now about 25 acres.) Mary Erskine donated $500 for a building.

Starrett encouraged the owners of a disused Methodist church on the lot to sell it at auction. They did, and he got it for $50.

The trustees had the building moved to the middle of the lot and turned into a schoolhouse. “A bell tower and other necessary buildings” were added, and Mary Erskine donated a bell and furnishings in the spring of 1883.

The trustees organized a “tree-planting picnic:” area residents were invited to bring a picnic dinner and a tree. The China history says the grounds gained about 250 trees.

By 1887, increased enrollment required a third teacher. The building “was raised ten feet to make room for more classrooms underneath.”

Students from Chadwick Hill and other school districts came and went by the term, not the year. Therefore, the history says, it was not until 1892 “that four students finished four years apiece so that the first formal graduation could be held.”

Trustees had a dormitory for girls built in 1900 and “later” (the history gives no date) another for boys. In 1901 the Maine legislature incorporated the school as Erskine Academy and approved an annual $300 appropriation.

Erskine’s original school building was destroyed in a fire on Nov. 5, 1926. Fortunately, Ford gymnasium had opened in November 1925; the bicentennial history says classes were held there until a new classroom building was ready in 1936.

The history also said that Mary Erskine’s bell was saved from the fire and “mounted on campus.” In the fall of 1971, someone stole it.