In the National Register nomination sheet architectural historian Gregory Clancey prepared in April 1983 for China’s two Quaker meeting houses (see the July 1 issue of The Town Line), he described two houses in which Rufus Jones lived, the Abel Jones house on Jones Road, in South China Village, and Pendle Hill, off Lakeview Drive. Both were added to the National Register on Aug. 4, 1983.

Clancey called the Abel Jones house a “typical Maine Federal farmhouse.” It is two-and-a-half-stories tall, facing west toward Jones Road, with a long story-and-half ell on the north side. Clancey wrote that the large barn farther north on the lot dates from the end of the 19th or beginning of the 20th century.

The historian summarized the major interior changes late in the 19th century that relocated the front entrance and stairs and rearranged rooms on the first and second floors. Original features surviving in 1983 included some of the Federal-style mantels and the pumpkin-pine floorboards.

Edwin and Mary’s son Rufus was born in Abel Jones’ house on Jan. 25, 1863, and lived there until he went to a Friends’ boarding school in 1879. He was named in memory of his father’s younger brother, who had died the year before.

His grandparents and his parents spent the rest of their lives in the house, and Clancey wrote that after he became a Haverford College professor and world-renowned religious leader, Rufus Jones frequently came home for long periods.

In 1983, Clancey wrote, the Jones family still owned the house. The South China Library Association is the present owner.

Pendle Hill was the summer home for Rufus Jones and his family. The cottage, as Clancey called it, is on a hill on the west side of Lakeview Drive, a short distance north of South China Village.

The main building was a story-and-a-half Shingle style structure with a generous porch facing the lake. The whole center of the building was open, with a stone fireplace on one wall. Doors on each side provided access to bedrooms, the kitchen and other areas.

The walls were pine boards; the roof beams were exposed, Clancey wrote. Except for the front door with its “oval light and beaded courses about the panels,” the building was undecorated.

The National Register property consists of the main building, “offering a dramatic view of the lake,” a smaller building and the grounds sloping down to the shore. Clancey also included the “long row of mature pines” separating Pendle Hill from the adjoining Jones family property to the south.

In January 1984, Frank A. Beard and Roger G. Reed successfully nominated the Eli and Sybil Jones house on Dirigo Road, in the southwest corner of the intersection with Belfast Road (Route 3). It was added to the National Register on March 22, 1984.

Eli (1807-1890), and Sybil (1808-1873) Jones were Rufus Jones’ uncle and aunt, and like him were known nationally for their faith. They were a major influence on their nephew; the first of the many books he wrote was a biography of the couple.

Eli and Sybil married in 1833 and promptly moved into their newly-built home east of South China Village. From 1840 on, they spent much of their time spreading the Quaker doctrine over a large part of the world.

“In a time when the 12-mile wagon ride from South China to Augusta was a day’s project,” Beard and Reed listed areas they visited: “Nova Scotia and New Brunswick, the British Isles, Scandinavia, Western Europe, Greece, Egypt, the Middle East, and Liberia.” They had an audience with the Liberian President, and in the Middle East Sybil Jones talked with women in harems.

The Historical Register nomination form describes their home as a small, one-and-a-half-story wooden building on a granite foundation, facing north onto the main highway. The historians wrote that in 1983, the China Historical Society recognized Eli and Sybil Jones on the then-annual Day of Remembrance and put a commemorative plaque on the house.

In addition to the early homestead described in the March 18, 2021, issue of The Town Line and the buildings associated with China’s famous Quakers described last week and above, the Town of China has had two other National Register listings. 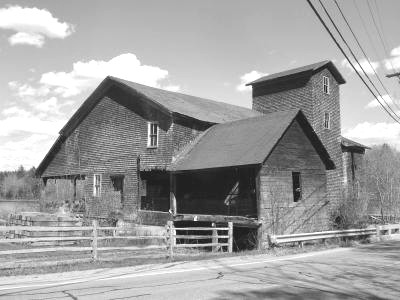 Dinsmore Grain Mill, in Branch Mills, before its demolition.

The Dinsmore Grain Company Mill, as it was called when it was listed on Nov. 17, 1979, was a large building over the West Branch of the Sheepscot River in Branch Mills. It had been built in 1914, last in a succession of grist mills and sawmills on the dam that backed up the river to create Branch Pond.

Wikipedia says the earliest mill on the site dated from 1817 and belonged to Thomas Hacker. Later, Hacker’s son took over, and in 1879 he took as a partner his son-in-law, Thomas Dinsmore (1824-1916).

Thomas Dinsmore left the business to his son, James Roscoe Dinsmore (1858-1937). Wikipedia says this James Dinsmore built the 1914 building that was listed on the National Register, after the 1808 fire that burned the entire village center, and operated it as a gristmill.

By 2010, neighbors, Branch Pond landowners and state environmental regulators were unhappy with the deteriorating building and barely-functional dam. The owners of the property were unable to make needed repairs.

In 2017, Wikipedia says, the Atlantic Salmon Federation bought the mill and dam. The Federation oversaw demolition of the building and added a fish passage at the dam.

According to Maine Historic Preservation officials Beard and Bradley, who prepared the 1979 National Register application with student intern David E. Fortin, “The Dinsmore Grain Company Mill is a remarkable survival which is a model for small businesses which may in the future seek to return to water power as a relatively inexpensive and reliable source of energy.”

Another listing in the Town of China is the China Village Historic District. It consisted of 47 buildings when it was added to the National Register on Nov. 23, 1977.

The district extends from the north end of Main Street, at the intersection with Routes 9, 202 and 137, south on Neck Road to what was then the Brown Farm, set well back from the west side of the road, and the Bubar house on the east side of the road. It jogs eastward to include buildings on Peking and Canton streets and Water Street (now Causeway Street) as far as the end of China Lake’s east basin.

Three other Maine residents have been Presidential candidates, all for major parties: Republican James G. Blaine in 1884, Re­publican Mar­garet Chase Smith in 1964 and Democrat Edmund Muskie in 1972. Each got more votes than Bubar did; none got enough votes to be elected.)

The China bicentennial history includes an anecdote about one of the shoemakers, George Wentworth. One Fourth of July (a holiday that, like Halloween, “was an occasion for mischief-making,” the history explains), local boys put Wentworth’s cobbler’s bench atop the roof of the shop. The next morning, Wentworth opened the shop, “put on his cobbler’s apron, climbed up on the roof, sat down at his bench, and went to work.”

From 1843 to 1927, Main Street had a Methodist Church on the west side, north of the Grange Hall. A private high school, China Academy, operated from 1828 to 1887 in its second and final home, a brick building on the east side of the street across from the library.

Most of the buildings in the District were in 1977 and are in 2021 private homes. They represent a variety of architectural styles and dates. Historian Beard and graduate assistant Stephen Kaplan, who prepared the nomination form, dated the earliest houses from 1809 and 1810 (families still live in and maintain both these Federal-style buildings).

The non-houses in the Historic District in 1977 were:

— The concrete-block China General Store, built in 1961; now a private home.
— Silver Lake Grange Hall, built in 1908; now a vacant former Grange Hall (see The Town Line, April 15, p. 10).
— The China Village Post Office, a single-story Federal-style wooden building constructed in 1960 by local residents William Foster and Karl Wilson; still the village post office.
— The Albert Church Brown Memorial Library, since 1941 in the Fletcher-Main House, a two-story wooden Federal building dating from about 1837.
— The Alfred Marshall – Benjamin Libby Block, known then as the Masonic Hall, a large, Federal style, two-story brick building dating from about 1825 that had seen many changes of use; now demolished and the lot used for parking.
— The Farnsworth Boat Shop, described as a two-and-a-half-story Greek Revival building built in or before 1836; still standing.
— The Woodsum Building at the top of Water Street, a two-story wooden Greek Revival building built in or before 1839 that housed stores and shops, briefly the library and later the American Legion Hall; now demolished.
— The two-and-a-half story hotel barn just north of the large Brackett (later Adams) house on the north side of the top of Water Street, built sometime in the 19th century when the house was a stagecoach stop and an inn; now demolished and the new Masonic Hal on the site.
— The China Village Volunteer Fire Department headquarters, a single-story wooden building dating from about 1955, with additions; still in use.
— The China Baptist Church, a single-story Federal building with a tower and steeple, dating from 1835, remodeled in 1900; still in use.

Beard and Kaplan described the district as a “cohesive, homogenous grouping of 19th and 20th century architecture.” Over almost two centuries, they wrote, “the predominent [sic] characteristic has been a simple forthright interpretation of the current architectural mode. The structures are well-designed vernacular examples of their period, with no pretensions.”

The result, in their view, was a “villagescape” that, despite scattered unobtrusive modern buildings, “retains the fabric and flavor of Maine’s 19th-century era of prosperity.”