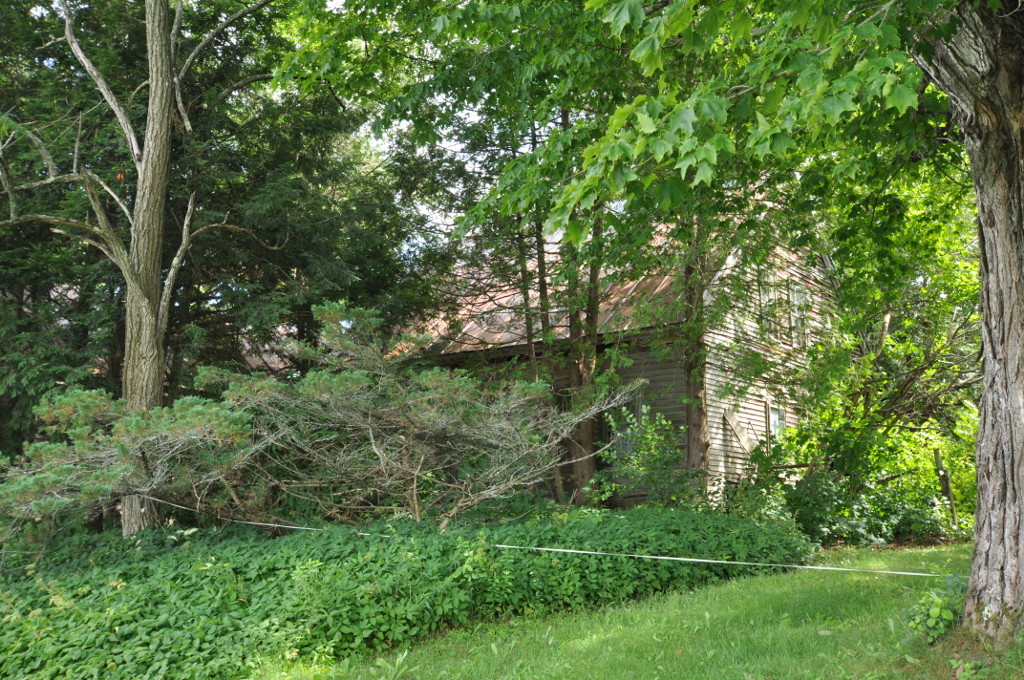 The third farm property in the area this series covers that is on the National Register of Historic Places is in China.

The Edmund and Rachel Clark Homestead is on the west side of China Lake. It was listed on the National Register on Oct. 4, 2006. The person who prepared the nomination form was the same Christi Mitchell who described the two farm properties listed in last week’s article on the Albion and Benton farms.

Like the Hussey-Littlefield Farm and Colcord Homestead, the Clark Homestead is private property; the owners’ rights must be respected. Unlike the other two, the list of Maine historic places says the address for the Clark property is restricted, and the application is not available on line.

Wikipedia says the 15-acre property has a surviving farmhouse, the main single-story Cape-style section built about 1789 and a Cape-style addition on the north that dates from the early 1800s. The article is erroneous in that the house and ell are each a story and a half, with paired second-story windows under the pitched roof.

The original central chimney had been taken down by the time the Wikipedia description was written. Surrounding farm buildings had disappeared.

According to the China bicentennial history and on-line genealogies, Edmund Clark, with his wife Rachel and four children, and either three or four of his brothers, plus their parents and their sister and her husband, were the first settlers in China.

John “Black” Jones and Abraham Burrill surveyed the area around China Lake in the fall of 1773 and finished in the spring of 1774. By then Edmund and Rachel and other family members were in Gardiner, Maine, where they met Jones over the winter.

When Jones resumed the survey in the spring, at least a dozen Clarks came with him or followed over the summer. Sources agree that Edmund chose a lot on the west side of the lake; his brother, Jonathan, Jr., might have settled nearby. The senior Clarks, Jonathan, Sr., and Miriam or Mariam, and other family members preferred the east shore. One brother, Andrew, is said to have established his homestead at the south end of the lake.

Edmund and Rachel Clark’s children who came to China with their parents were Miriam (1767-1803), Elizabeth (1768-1776), Eunice (1770-1845) and Randall (1772-1862). Miriam married another early settler named Thomas Ward in the latter half of the 1780s; Eunice married Thomas Ward’s brother, Samuel. Their sons moved a mile or so north to what is now China Neck and the area west of it, giving the early names Ward’s Hill and Ward’s Corner to localities there.

Many local histories include information on early agriculture, or as much information as is available when people lacked time and sometimes skill to keep extensive written records.

Samuel L. Boardman opened his chapter on agriculture in Henry Kingsbury’s Kennebec County history with an overall description of the land in the central Kennebec Valley. The area is well suited to farming, he observed; it has generous water supplies and in many places good soil, is not mountainous and is far enough inland so that plants are not harmed by “the saline winds and fogs of an ocean atmosphere.” 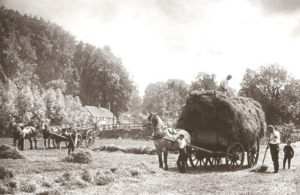 Haying in the 19th century

Boardman wrote that in Winslow, the soil in the Kennebec and Sebasticook river valleys is rich, productive loam, though the eastern edge of town is “ledgy.” Albion, Benton, Clinton and Windsor he listed as “excellent grazing towns,” meaning their soils produced good hay. Writing in 1892, he called China, Vassalboro and Sidney “without question the garden towns of the county.”

The early Kennebec Valley settlers recognized the advantages, Boardman wrote, and made full use of them. He lists a number of early farmers who deserve credit for making major improvements and for sharing them, including R. H. Greene, of Winslow; Jesse Robinson, of Waterville; and Rev. W. A. P. Dillingham, of Sidney.

R. H. Greene is listed on line as one of the Maine agents for The Cultivator, a monthly agricultural magazine published in New York beginning in 1834.

Jesse Robinson was born in Attleboro, Massachusetts, in 1772. He had 10 children by three wives, and according to the record of their births lived in several towns in the central Kennebec Valley. He died in Waterville May 12, 1868, and is buried in Pine Grove Cemetery.

The Universalist Register has a long biographical sketch of Rev. William Pitt Addison Dillingham in its section on deceased clergy and lay people (see box accompanying this article).

Farming in the late 1700s required cutting trees first, to provide wood to build houses and barns and to keep them warm; to clear the land to grow crops; and to sell to provide income. Several histories mention lumbering, sawmills and exports of wood in various forms.

Milton E. Dowe, in his Palermo history, says settlers arriving in the 1770s found trees over 200-feet tall. The flat stumps left when they were cut down “were large enough for a team of oxen to turn on,” he wrote.

(A team of oxen can mean either two oxen, also called a yoke, or eight oxen, in pairs.)

When Millard Howard continued Palermo’s story in his 2015 Introduction to the Early History of Palermo, Maine, he commented that a life dependent on agriculture is defined by the seasons and the weather, and “if the weather failed to cooperate, disaster was close at hand.”

The first homesteads were, of necessity, self-sufficient farms, where the family grew as much as they could of everything needed to feed themselves and their livestock. Farmers produced a variety of crops; specialization came later.

The history of Fairfield quotes from a letter Elihu Bowerman wrote in 1848 remembering his first years in North Fairfield, starting in the summer of 1783. He, his wife and his two brothers lived in the log house they built.

During the first winter, the potatoes they raised on a Vassalboro farmer’s land froze in the farmer’s cellar. A Winslow farmer gave them some corn that they had ground. They mixed the frozen potatoes and ground corn into loaves and baked them to make “the best bread we had for 16 months.” 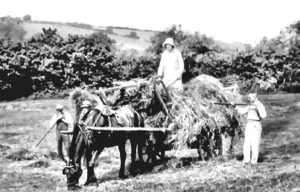 Fall harvest in the 19th century.

By cutting trees and selling or burning the wood, they cleared enough land by the spring of 1785 to plant “corn, potatoes, beans and some other things, but no wheat.” They also made boxberry tea and maple sugar.

In Linwood Lowden’s history of Windsor, he wrote that a July 1793 deed describes a “meadow” that the seller of the land had “divided into at least two twelve-acre lots and fenced,” and on which he was growing rye.

An 1807 letter from another early Windsor resident lists the “corn, wheat, rye, and hay” he was growing. By around 1815 several settlers had planted apple orchards; Lowden wrote that from the 1860s until the “great freeze of the winter of 1933-34,” apples were one of Windsor farmers’ main crops.

Palermo had 113 barns by 1820, according to agricultural census records Howard reviewed. Products of the land included wheat, hay (1,185 tons in 1820), oats, barley, peas and beans.

Howard copied a December 1851 letter from Nehemiah Smith, a resident of adjacent South Freedom, that gave more details about mid-19th-century agriculture. The common form of wheat was spring wheat, with Red Sea the preferred variety, although winter wheat was gaining in popularity. Spring wheat was sown May 10, and in 1851 brought the farmer $1 per bushel.

Potatoes had been important until an 1845 crop failure. Apples, once unusual, had become an export crop. Cherries were grown until about a decade earlier, when a “barnacle” appeared on the wood and wiped out the cherry trees.

(A 2020 on-line article by Jane Purnell for LawnStarter lists two cherry tree diseases that affect trunks and branches. Black Knot, characterized by “hard, black swellings or knots” up to six inches long sounds likely to be called a barnacle. Purnell wrote Black Knot reduces production; she did not say it kills the tree, though another source does say affected trees die.

Cytospora canker Purnell described as “dark, depressed cankers”; branches wilt, and cankers can kill “parts” of a tree. Other sources list blossom rot and related fungal diseases as fatal to cherry trees, but their symptoms begin with discolored or wilting flowers that Smith did not mention.)

Alice Hammond’s history of the Town of Sidney says that hay was Sidney’s most important crop from the early days, for home use and, as horse-drawn transportation expanded, for sale to urban areas. She quoted an 1850 report that Sidney “produced more than 5,700 tons of hay” that year.

Early settlers in Sidney also planted apples. Hammond wrote that apple trees were at first put on land less useful for farming and along stone walls that bounded fields.

As the population of the Kennebec Valley grew, agriculture was supplemented by manufacturing and commerce, but it has never been replaced, as anyone familiar with the area knows. From haying in the spring through apple-picking and the annual Common Ground Country Fair in the fall, from farm machinery on the roads to farm photos on websites, it remains important.

According to the Universalist Register, William Addison Pitt Dillingham was born Sept. 4, 1824, in Hallowell, and raised in Augusta by an uncle after his parents died.

The Universalist biography assures us of his purity, invulnerability to the bad habits of his peers, “noble and generous impulses and…conscientiousness and truthfulness,” character traits that appeared in his youth and continued throughout his life.

Dillingham spent a semester at Waterville (later Colby) College before transferring to “Cambridge” – presumably Harvard – where he abandoned law school for divinity school. Ordained in 1847, he served first in Augusta and then in other Maine towns, including Sidney, where he bought a farm, and Waterville.

He married Caroline Townsend, of Sidney, and they had two sons and a daughter. In 1864 and 1865 he was Waterville’s representative in the Maine House, serving as Speaker in 1865.

In 1867 Dillingham switched from the Universalists to the Swedenborgians, for whom he preached in Chicago before rejoining the Universalists there in 1870. In 1871 he had just come back to his Sidney farm and arranged to preach in Sidney when he died suddenly of pneumonia on April 22, 1871.