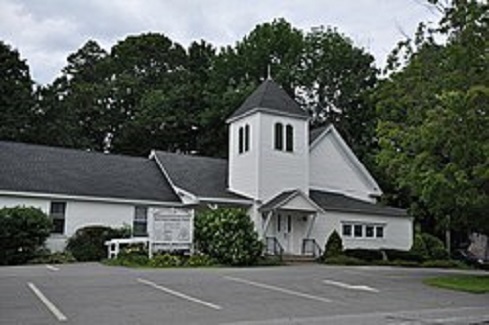 Two churches in the Town of China were added to the National Register of Historic Places on Aug. 4, 1983. The earlier is the Pond Meeting House, on Lakeview Drive, built in 1807. The South China Meeting House, now South China Community Church, on Village Street, dates from 1884. Both were originally houses of worship for the Quakers, or Society of Friends.

The present Town of China’s first settlers, two generations of the Clark family, came in 1774 and established their homesteads around China Lake’s east basin. Originally named Jones Plantation after surveyor John Jones, the area was Harlem from 1796 to 1822 and became China in 1822, with various boundary changes along the way.

In his chapter on the Society of Friends in Kingsbury’s Kennebec County history, Rufus Jones, China’s most famous Quaker, wrote that Miriam Clark, wife of settler Jonathan Clark, and her sons Andrew and Ephraim were Quakers; her husband and two other sons were not.

Andrew and Ephraim Clark made their homes on the east shore of the lake. For the first few years, the nearest Quaker meeting was 40 miles away in Durham.

Enough other Quaker families arrived in the next two decades to justify a China meeting, which began in 1802 in Lemuel Hawkes’ house. Jones quoted from February (2nd month, to Quakers) 1807 minutes of the China Friends meeting, at which they voted to share the cost of building a 30-by-40-foot meeting house on land bought from Jedediah Jepson. They appointed Jepson, Reuben Fairfield, Isaac Hussey and James Meader as the building committee, instructing them to work as they thought best and report when necessary. 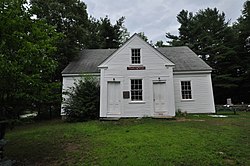 The Pond Meeting House is about three miles south of the north end of the lake. Gregory Clancey, the architectural historian who wrote the application for National Register recognition in April 1983, described it as “a modest but pleasing post and beam structure, devoid of all ornament or stylistic claim, save for the concern with regularity and proportion characteristic of Federal buildings.”

The building is a story-and-a-half high with a steep roof. The equally tall entranceway, attached at right angles on the west side of the building, has separate entrance doors with a window between them.

Although Quakers always accepted women as entitled to speak at meetings and to act as preachers, inside a meetinghouse men sat on one side and women on the other, usually with a moveable partition between them. They would be together for worship, separated for business meetings.

The May 13 history article was about Victor Grange in Fairfield Center, the oldest continuously operating Grange in the central Kennebec Valley area. Since then, Barbara Bailey, the Grange member who contributed so much to the story, has sent out the Grange’s summer newsletter.

One theme is continuing work on the grounds and building. The new parking lot beside the Grange Hall is finished and in use. Interior work has run into unexpected problems, as so often happens with old buildings (readers will remember, of course, that the hall was built in 1902 and 1903).

The section headed “The Insulation Saga” explains that Grange members are fund-raising to insulate the building. The first step, finished in May, was “to get all the critter droppings cleaned out and disinfected” to protect the ceiling.

An insulation vendor explained that insulating required adding ventilation. Grangers are now seeking someone who can ventilate and insulate the top of the building, as they continue to raise funds to pay that person. Suggestions, volunteers and donations are welcome.

The mailing address is Victor Grange, c/o Roger Shorty, 118 Oakland Road, Fairfield, Maine 04937; the email address is Victorgrange49@gmail.com. The Grange has a Facebook page that includes information on coming events, the second theme of the newsletter.

These include hosting the Fairfield Historical Society’s annual Quilt Show on Saturday, July 10, and Sunday, July 11, from 11 a.m. to 5 p.m. Admission is $5 to view more than 50 antique and new quilts. Grange members will provide lunches and snacks.

On Saturday, July 31, from 9 a.m. to noon, Rita Fortin, President of the Clinton and Somerset County extension services, will host a free workshop on canning green beans. She is scheduled to return on Saturday, Aug. 28, same hours, to talk about canning tomatoes. Interested area residents can sign up at the Grange email address above or by contacting Fortin directly at 453-2945 or ritafortin2@gmail.com.

The Pond Meeting House originally had two rooms separated by what Clancey called “a shutter-door attached to the ceiling with iron hooks.” The interior was a single room by 1983, except that in 1930 a corner had been partitioned off to make a kitchen.

Clancey described the interior with its exposed beams and hand-hewn pine floorboards and roof timbers. The meeting house was by then, as it is in 2021, part of the China Friends Camp, founded in 1953 under the auspices of the New England Yearly Meeting of Friends.

What is now the South China Community Church was initially a Friends meeting house also, built in 1884 on the north side of Village Street.

The first church building on the lot, Jones wrote, was the Second Baptist Church’s brick meeting house, built in the 1820s or 1830s. On May 10, 1856, church members approved selling the building. It was moved, and in 1862, they put up a larger wooden building on the lot.

The South China Baptists were active in the prohibition movement in the 1860s and 1870s. On Oct. 1, 1869, Jones wrote, “a liquor man” burned down their church. The Friends later bought the lot for a dollar on condition that they build a house of worship.

The earliest section of the meeting house, Clancey wrote, was a single room in a minimally-decorated, clapboard-sided story-and-a-half building with a pitched cedar-shingled roof, its gable ends on the north and south. There were three windows on each of the long sides and a small vestibule on the south (street) side

About 1900, Clancey wrote, the vestibule was extended across the gable end and four street-facing windows were added. At the west end of the vestibule a square tower not much taller than the building was constructed, with a south-facing door in the base. Another door was added to the east end of the enlarged vestibule.

At that time, the upper part of the tower was shingled rather than clapboarded and was “painted a darker color than the rest of the church,” Clancey wrote. Later (undated) additions included a room behind the tower attached to the original west wall and a small shed that Clancey wrote was a kitchen in 1983.

The interior was remodeled repeatedly. The change Clancey mentioned specifically was the 1970s addition of a stained-glass window parishioners bought from Whittimore Associates, of Needham Heights, Massachusetts.

Meanwhile, the building was home to weekly Friends meetings until the 1930s, when the congregation became too small to support a pastor. In 1935, the bicentennial history says, the Friends proposed uniting village residents in the South China Community Fellowship, which continues active today.

The Friends own the church building. Fellowship members retain their individual religious affiliations, but they cooperate to maintain the building, select a minister and organize and finance community religious and social activities. Current Pastor Paul Harwath has served since 2012, according to the church website.

Clancey’s 1983 application for National Historic Register listing included three other buildings associated with Rufus Jones, who was profiled in the July 30 and August 6, 2020, issues of The Town Line.

Two residential buildings gained individual listings and will be discussed, with a third, in the next article in this series. The third nominee, the South China Public Library across Village Street from the church, was rejected by the keepers of the National Register.

The square story-and-a-half library building was built in 1900, Clancey wrote, with donated materials and local labor. It housed books for a library originally incorporated in 1830. Library association members have described the South China Library as the oldest continuously functioning library in Maine, but not the oldest library (see box). 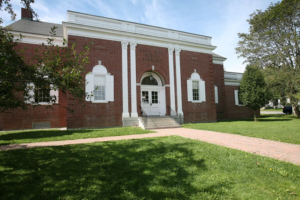 The Blue Hill library, in Hancock County, was organized in 1796 in the local grocery store, with the grocer as the librarian. According to an on-line history, “Overdue fines were six cents a week, with additional fines of two cents per page for spilled drops of oil or tallow.”

The library’s bookplate, which the history site says is still used, was designed by the first Congregational minister in town, Jonathan Fisher (1768-1847; in Blue Hill from 1794 to 1837). Fisher, one of the founders of Bangor Theological Seminary, was also an artist (his self-portrait is on his Wikipedia page), a writer (including local newspaper reporting) who could bind his own books, a scientist, mathematician and surveyor. He built his house and designed and built furniture.

The Blue Hill Library history page explains that lack of interest caused the library to close before the Civil War. After almost 20 years, a new group reorganized it in the 1860s as the Ladies Social Library of Blue Hill.

The ladies met once a week to swap and discuss books over dishes of ice cream. By 1895, Blue Hill had a new town hall and the library had two rooms on the ground floor. The first professional librarian, a Colby College graduate named Anne Hinckley, was hired in or soon after 1930.

In the 1930s, the library had a car that was its bookmobile, used to bring books to remote residents and to students in Blue Hill’s seven elementary schools and George Stevens Academy. The history site says library services included party planning.

Besides Hinckley, two other women are associated with the 20th-century Blue Hill Library, according to the history site.

Adelaide Pearson was responsible for hiring Hinckley and was the driving force behind the first separate library building, a brick structure designed by Augusta architects Bunker and Savage and opened in March 1940. She and Hinckley persuaded the federal Public Works Administration, created to combat the Depression by funding big public works projects, that a library in Blue Hill, Maine, qualified.

Dorris Parker was the first full-time Blue Hill librarian. She started as head librarian in 1944 and retired in 1981. An on-line photo, from the 1950s, shows a small, dark-haired woman behind a large, rather cluttered circulation desk that has three panels across the front and two more on back-folded side wings, each with a scene that appears to depict a historical event. Well-filled bookshelves rise on either side of the desk and the office area behind it.

The Blue Hill Library remains active today, in space that was doubled by a $2 million expansion in 2000 and 2001. The expansion provided a children’s room and a community meeting room. The website says the library building typically hosts 450 meetings and 400 library-sponsored events annually.

Clancey had the library building on his nomination list because, he wrote, “Rufus Jones served as library president 1919-1948, the only civic activity with which he was associated.”