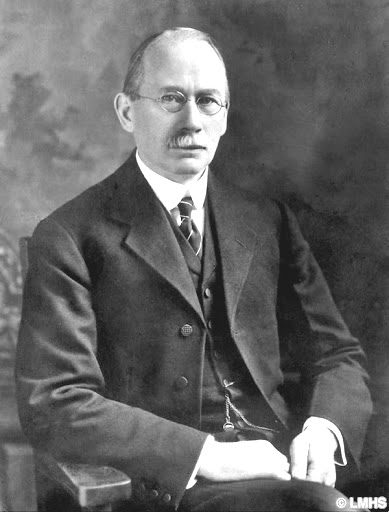 After the early life summarized in the July 30 issue of The Town Line, prominent South China Quaker Rufus Jones entered Haverford College, in Pennsylvania, in 1882 as a sophomore, receiving a full scholarship (which he later repaid). His 20th birthday would be Jan. 25, 1883.

Jones chose Haverford over Brown University, a choice he never regretted. In his autobiographical writings he mentions professors and classmates whose influence lasted a lifetime.

Jones’ admiring biographer, Elizabeth Gray Vining, presents him as a man with wide interests, academic and personal. He read and wrote about religion, especially mysticism; philosophy; history; biography and autobiography; and literature, especially poetry. He played cricket, edited the college newspaper, took extra courses and still had time to enjoy long walks in the surrounding country with friends.

He made friends easily, Vining writes, acquiring benefactors and becoming an unofficial advisor to younger students. Before he graduated in June 1885, a New Jersey man he met through another student had offered to put him through law school, since Jones had planned to become a lawyer.

By then, Jones had decided law was not right for him. He refused the offer, with thanks (and he and the New Jerseyite remained friends ever after), and came back to the family farm in South China to see what would happen.

Two things happened that summer. The University of Pennsylvania offered him a graduate history fellowship; and the next day Oakwood Seminary, an upstate New York Quaker school, offered him a teaching job. He chose Oakwood.

There he found that he enjoyed teaching; he read so much that he developed the eye problems that lasted off and on for the rest of his life; and he met Sarah “Sallie” Coutant, a fellow teacher. The two were engaged in 1886 at the end of the school year; they married July 3, 1888. In the interim, Jones spent a year touring Europe and a second year teaching at Providence Friends School (now Moses Brown School) to earn enough to repay what he borrowed for the European trip.

Since 1827, American Quakerism had split into factions, and many of the old traditions, including the long silences at meetings that Jones so appreciated, had been modified or eliminated in some meetings. It is a vast oversimplification to say that the division was between a more mystical, inward religion and a more worldly, outgoing one; but that was part of it.

One tradition was that an engaged couple had to notify their respective meetings and get approval before they could marry. Jones’ old-fashioned South China meeting posed no problem.

Sallie, a convert to Quakerism during their engagement, found the meeting she joined had discontinued the custom a dozen years earlier. When Jones insisted she be properly approved, Sallie went ahead. In a letter to her fiancé she described the pleasure she had given to some of the older meeting members who were delighted to see the tradition revived.

Jones and his wife spent another year in Providence; during the summer Jones wrote his first book, the biography of Eli and Sybil Jones. In the spring of 1889, he was offered the job of principal at Oak Grove Seminary, in Vassalboro, where he had studied for one term. The couple spent four years there, with Sallie as matron doing her share of the work. Their son Lowell (named after poet James Russell Lowell) was born Jan. 23, 1892, two days before his father’s 29th birthday. 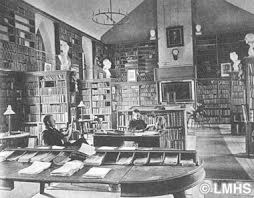 In 1893, Jones was asked to become editor of the Haverford-based Quaker weekly called The Friends Review – because, he was told, he had done such a good job on the Haverford College paper. He accepted with the understanding he would also teach at the college. Within a year, the new editor had combined the review with its Western-based, and religiously differing, rival to create The American Friend, edited by Jones and representing a broader range of views.

(According to an on-line article, the current equivalent of The American Friend is Friends Journal, published since 1955 after, again, two journals representing different versions of Quakerism merged. The magazine appears online and in 11 print issues each year.)

Vining presents Jones as focused on promoting understanding and cooperation among differing Quaker communities. He toured much of the United States and visited Quakers in Europe, hearing varied views, and supported proposals for uniting different United States groups. In his many columns and books on Quakerism, historical and contemporary, he described and analyzed different versions of the faith while making clear his own beliefs.

In another oversimplification, Jones was in the mystical stream of Quakerism, believing that a personal, caring, compassionate, all-knowing God was with him constantly, providing guidance that led him to right decisions for himself and for those he influenced.

With this foundational belief and his outgoing personality, Jones acquired influence in the Quaker community in the United States, then in Western Europe and eventually world-wide.

Jones’ confidence in unseen beneficence carried him through personal trials and griefs. Sallie died Jan. 14, 1899, apparently of tuberculosis. Their son Lowell, to whom Jones was devoted, died July 16, 1903, in the aftermath of diphtheria. In the next few years he lost his father, his much-loved Aunt Peace and a close friend, John Wilhelm Rowntree.

That same year, he bought a house near the Haverford campus, where he and Elizabeth lived for the rest of their lives. He resigned from the Haverford faculty in June 1934, after teaching for 41 years, but did not give up his extensive travels world-wide or his summers in South China.

As Vining considers Jones’ achievements, she lists some of his major writings, like his historical work, Studies in Mystical Religion, published in 1909; his friendships with Quakers and other religious leaders all over the world (he asked for and got a meeting with Mahatma Gandhi, in India, in 1926); the innumerable conferences he organized, spoke at and followed up on; and especially the American Friends Service Committee (AFSC).

Quakerism is pacifist, so when World War I started in 1914, and especially after the United States joined in April, 1917, young Quaker men faced a dilemma. Some joined the military as fighters; others joined as non-combatants; still others wanted to help the United States and its European allies without having any contact with the military. The AFSC was organized to enroll the last group.

Several people had ideas for such an organization, but Vining writes that Jones’ plan was the one adopted in May 1917. In June the organizing committee asked him to chair the organization. The job would not take much time away from his teaching and writing, they assured him.

After a week’s consideration, and well aware that the chairmanship would be time-consuming, Jones accepted. He served until 1928, and after retiring became honorary chairman. The book he published in 1920 on the organization’s World War I work is titled A Service of Love in War Time.

AFSC has helped rebuild Europe after two world wars, rescued victims of regional conflicts and participated in international peace-building efforts. Its contemporary website lists offices in the United States and in African, Asian and Middle Eastern countries. The organization received the Nobel Peace Prize in 1947, along with the Friends Service Council.

As a child, Rufus Jones attended the Pond Meeting House, built in 1807, and now part of the Friends Camp, until the South China Meeting House was built in 1884 closer to his home. Pendle Hill was the family summer home from its completion in 1916.

Next week: another Maine small-town boy who gained national fame.