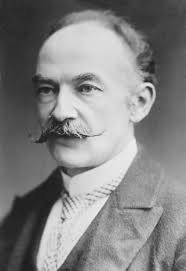 The Man He Killed.

“Had he and I but met
By some old ancient inn,
We should have sat us down to wet
Right many a nipperkin!

“But ranged as infantry,
And staring face to face,
I shot at him as he at me,
And killed him in his place.

“I shot him dead because –
Because he was my foe,
Just so: my foe of course he was:
That’s clear enough; although

“He thought he’d ‘list, perhaps,
Off-hand like- just as I –
Was out of work-had sold his traps –
No other reason why.

“Yes; quaint and curious war is!
You shoot a fellow down
You’d treat if met where any bar is,
Or help to half-a-crown.”

English novelist/poet Thomas Hardy (1840-1928) was quite obsessed by the indifference of the universe to man’s predicament in this life. One feels this thread in such novels as Far From the Madding Crowd, Tess of the D’Urbervilles, and Jude the Obscure and a sense of hopelessness pervades his poem, The Man He Killed, which first appeared in a 1902 issue of Harper’s Weekly. It was written during the Boer War, which lasted from 1899 to 1902, and mirrored Hardy’s sense of war’s irrationality, which increased even more during World War I (Two younger English poets who served in WW I’s trenches, Rupert Brooke (1887-1915) and Siegfried Sassoon (1886-1967) were inspired by Hardy’s poems in writing about their own wartime experiences.).

The unnamed narrator in the poem speculates about what if he and the enemy soldier could have met in a pub and had a beer together – ‘Had he and I but met’, the word ‘but’ slightly intensifying the sadness of war’s actuality. And then the second stanza, ‘But….staring face to face,/I shot at him as he at me,/And killed him in his place.’ For this soldier, it is kill or be killed on the spur of the moment; the backlash of guilt hits him later. ‘I shot him dead because – /Because he was my foe, /Just so…That’s clear enough’ but then ‘although.’ This one word, ‘although’ stinging with remorse and despair.

The last two verses deal with the other possible reasons both soldiers are fighting for their country – ‘was out of work ­ had sold his’ { FISHING?} ‘traps – /No other reason why.’

Finally, Hardy tightens the screws on the impersonal nature of war, of men on their respective sides of the battlefield blowing each other’s brains out and how it is so ‘quaint and curious war is.’

Hardy achieved a poise in this evoking of his outrage at war almost on the same level as Homer in the Iliad and the other Greek tragedians, Aeschylus and Sophocles.

A final note: when Hardy’s novel Jude the Obscure was published in 1895, its depiction of sex and religion was so controversial that several bookstores sold the volume in brown paper bags and one Anglican clergyman destroyed his own copy. Hardy commented years later that, “After these hostile verdicts from the press, its next misfortune was to be burnt by a bishop – probably in his despair at not being able to burn me.”

Our local Colby College Library has one of the finest, world-renowned collection of Thomas Hardy first editions and other memorabilia in its rare book archives, courtesy of a long-time English professor, curator and Hardy scholar, Carl J. Weber (1894-1966).

Up and down the Kennebec Valley: Notable citizens – Part 2B of 3 I’M JUST CURIOUS: It’s the little things that matter
Scroll to top