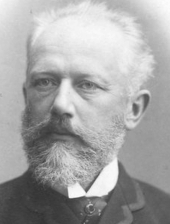 Tchaikovsky finished composing his 5th Symphony in 1888; along with the 4th and 6th (Pathetique) Symphonies; it expresses the most intense extremes of emotion, ranging from harrowing despair to jubilation. The composer himself was manic and tormented his entire life by self-doubts and depression. These three symphonies mirror them but have memorable melodic material and development which have sustained their popularity in concert halls and recording studios since their composition. I have lost track of the number of recordings I have of them.

Tchaikovsky visited Hamburg, Germany, in 1888 and 1889 and was hosted by a locally-prominent music teacher Teodor Ave-Lallemant (1806-1890) during the first trip before he completed the symphony. The two struck up a fast friendship but had a most interesting conversation regarding the older man’s feelings about Tchaikovsky’s music.

Ave-Lallemant felt that the composer’s pieces heard then, which included the Serenade for Strings and 1st Piano Concerto, were horrendous sounding but blamed its lackings more on Russia’s cultural backwardness than on the composer. He insisted that Tchaikovsky had the makings of a great composer if only he would move to Germany to absorb its inspiring traditions.

Tchaikovsky wrote in his journals that “Evidently Herr Ave-Lallemant harbours a deep prejudice against Russia, and I tried as far as I could to mitigate his hostile feelings towards our country, which, incidentally, this venerable Russophobe did not actually express openly but merely allowed to shine in his words. We parted as great friends.”

He dedicated his 5th Symphony to Ave-Lallemant and conducted its German premiere on his 1889 trip to Hamburg. Sadly, the gentleman was too ill to attend and died the following year. Tchaikovsky’s German publisher wrote a letter to the composer conveying the news and the following comment:

“Good Herr Ave-Lallement has died. The most distinguishing event in his life was in any case that which put his name on your 5th Symphony. He accorded you his full sympathy. ”

Paul Kletzki (1900-1973) conducted an especially beautiful performance that was suffused with poetic lyricism and the 1946 recording can be heard on YouTube. Kletzki grew up in Poland and, while he was fighting for his country during its war with Russia, a bullet grazed his skull while all too many of his comrades were killed. Later he fled the Nazis but his parents and a sister were murdered during the Holocaust.

Every recording I have heard of him is quite good and many of them can also be heard on YouTube.

He died on March 5, 1973, after collapsing during a rehearsal with the Liverpool, England, Philharmonic.

Up and down the Kennebec Valley: Augusta printers Thanksgiving pies made to order
Scroll to top