Playwright Sir William Schwenck Gilbert (1836-1911) and composer Sir Arthur Seymour Sullivan (1842-1900) began a collaboration that produced 14 comic operas from 1871 to 1896, several of which are still produced often around the world. They were noted for the combination of Gilbert’s witty lyrics and Sullivan’s melodies. The story lines involved thinly-veiled satires on the customs and attitudes of 19th century English society and the then-reigning and wonderful Queen Victoria was one of their biggest fans. 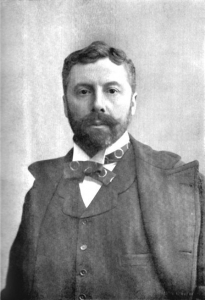 The premieres and long runs were bankrolled by businessman, Sir Richard D’Oyly Carte (1844-1901) who founded the D’Oyly Carte Opera Company, which has produced many stagings and recordings of the Gilbert and Sullivan works, still doing so to this day. The company established the state of the art Savoy Theatre, in London.

Gilbert and Sullivan themselves were micro-managing perfectionists who had the right balance of strictness and wit to get everybody’s best performances, having little tolerance for prima donnas and sloppiness of detail .

The selections on the above cassette come from H.M.S. Pinafore, the Mikado, Yeomen of the Guard, Pirates of Penzance, Iolanthe, and the Gondoliers, and feature at least two examples of the team’s famous patter songs, which demand tongue-twisting singing- Pinafore’s I Am the Monarch of the Sea and Penzance’s I Am the Very Model of a Modern Major-General, both of them sung by the very gifted John Reed (1916-2010), who is joined by soprano Elizabeth Harwood (1938-1990) in a special favorite of mine, the Yeoman of the Guard’s I Have a Song to Sing, O!

I can’t finish without offering a few quotes from G & S:

Pirates of Penzance – “I don’t think much of our profession but, contrasted with respectability, it is comparatively honest!”

Princess Ida – “Darwinian man, though well-behaved, at best is only a monkey shaved.”