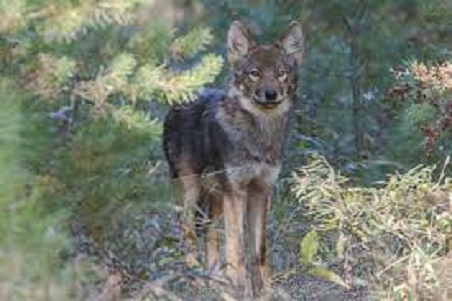 John M. Glowa, Sr., president of The Maine Wolf Coalition, Inc., (MWC) a 501c(3) nonprofit organization dedicated to wolf recovery in Maine through research, education and protection, is pleased to announce a new collaboration with Princeton University and Michigan Technological University. This collaboration will include the collection, preservation and analysis of wild canid scats, primarily from Maine, and is the latest development in a citizen science project to assess the status of wolves in Maine begun by MWC in 2019.

Wolves were documented to have been killed in Maine in 1993 and 1996. Since then, other than MWC’s efforts, little has been done to assess the status of wolves in Maine and the northeast. Given their similarity of appearance to eastern coyotes, it is likely that additional wolves have been killed in Maine, and in fact, since 1993, no less than nine wolves have been documented killed south of the St. Lawrence River from Massachusetts to New Brunswick.

Canada’s wolf range in Ontario and Québec is just 60 miles from New York and 75 miles from Maine. In fact, an 85-pound probable wolf was killed this past winter in central New York. Wolves have been documented to travel more than 1,000 miles during dispersal, making the northeast U.S. well within range for natural wolf recolonization. Furthermore, the northeast U.S. and maritime Canada contain tens of thousands of square miles of potential wolf habitat and abundant prey, making the region suitable for the natural return of wolves.

In 2019, MWC volunteers found scat from the first live Eastern wolf ever documented in Maine. The Eastern wolf is a smaller wolf found in southern Ontario and Québec, which typically averages approximately 60 pounds. It is similar in appearance and size to the eastern coyote (aka coywolf) with which it can interbreed.

Maine may also be home to larger gray wolves dispersing south from central Canada and the Great Lakes region. To date, MWC has collected more than one hundred wild canid scats, primarily in a 3.3 million acre region of Maine called the North Maine Woods.

The assistance from Princeton and Michigan Technological Universities will help to assess the status of wolves in Maine by analyzing the scats and interpreting the results. Event­ually, our hope is to have one or more graduate students in the woods of northern Maine monitoring radio-collared wolves.

Any wolves in the northeast are currently protected under the federal Endangered Species Act, although the U.S. Fish and Wildlife Service has claimed that their populations have recovered in most of the U.S. They have not recovered in the northeast, despite abundant habitat and prey, and the region’s proximity to wolf range in Ontario and Québec. MWC hopes to gather information to support the continued listing of wolves in the region under the Endangered Species Act and to promote natural wolf recolonization through research, education, and protection.