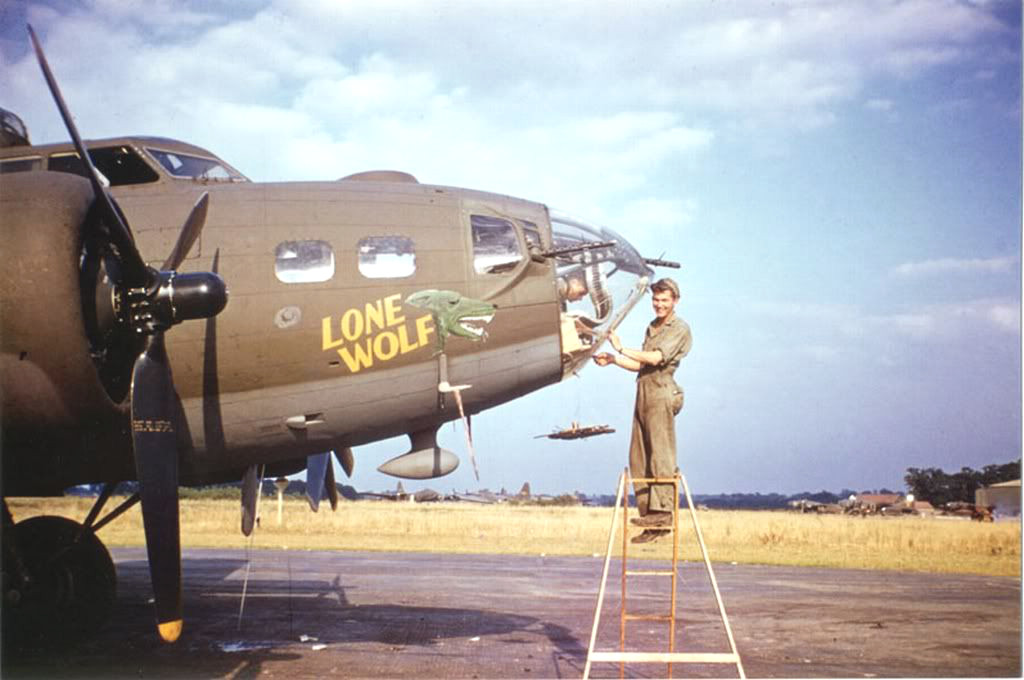 Al Kramer’s Lone Wolf, B-17 Flying Fortress in World War II, being readied by engineer and top gunner, Eugene Martin, in preparation of their next mission. (photo from The Town Line files)

A truly special man turns 100 years old on May 21, 2020! And a remarkable 100 years it has been for Alfred “Al” Kramer who currently resides at Woodlands Park Residences, in Waterville. Al was born and raised in Kew Gardens, Queens, New York City. World War II found Al a squadron leader in the 8th Army Air Corps, flying a B-17 Flying Fortress. He was shot down over occupied France, along with his entire squadron while returning from a mission over Stuttgart, Germany. Al was sheltered by the French resistance movement and over a period of several weeks, at times looking up at the soles of Nazi boots walking on floorboards under which he was hiding, made his way on a fishing boat back across the English Channel to safety. The complete story is the stuff of which fiction writers dream of creating; but for Al it was all too real.

Al graduated from City College, in New York City, and after the war graduated from the University of Michigan Law School. While working at a firm in New York City, Uncle Sam came calling again, literally at his desk; it was the Korean “Conflict” and he found himself once again in the left seat of another military aircraft, this time a Boeing KC97 Stratofreighter. And as only Al can tell it, he was never officially discharged. So he figured what the heck, he figured if he was still “active” he must be owed a pension. Needless to say after considerable discussions, Uncle Sam politely rebuffed him, but it always remained a source of amusement. 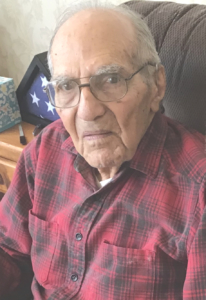 Upon return from this second stint in uniform, Al practiced law in Springfield, Massachusetts, with the exception of a few years back in New York City, until his retirement in 1985. To back up a bit, Al started coming to South China in the late 1950s to hunt and fish and became close friends with Al and Barb Poulin, Ed and Alice Dowe and many others in the community. And now, all these years later Al is not only a cherished friend but he is family, with no quotations marks needed.

In the early 1960s, Al had a hunting camp built on Route 3 and upon retiring had it made a year round residence to which he moved permanently in 1985. During “retirement” Al maintained three distinct passions; hunting, golf and a great meal in a fine restaurant (and by the way, he’s a fantastic cook himself)! Perhaps one of the more memorable hunting experiences occurred while duck hunting on a cold October morning on a beaver flowage with a skim of ice on it. Craig Poulin was paddling slowly along with Al in the bow when a group of wood ducks came straight on. They curved to the left and before Craig could shout, “NO! DON’T SHOOT!!”, Al swung for a passing shot and yep, over they went! Shotguns, ammo, coffee, decoys, everything. Right to the bottom and into the muck. With a never to be forgotten look on his face, gear was all retrieved. Luckily, it was only 20 minutes from home, so after an expedited trip back, everybody and everything dried out in front of his woodstove. Not to say they wanted to repeat it, it made for a lot of laughs afterwards.

If Al’s name isn’t memorialized someplace at Natanis Golf Course, in Vassalboro, it should be, because he golfed every day except Sunday (he didn’t want to hog all the time!) from the time he retired into his early 90s, never once using a golf cart. Guess there’s a lesson there for gaining longevity.
Certainly volumes could be written about anyone who achieves 100 years but Al’s is a remarkable story which makes him a truly unique, remarkable man; a man who is always grateful for what he has; not regretful for what is lost or what he never had; a man appreciative of others and generous to a fault with his gratitude and thankfulness. And a man with a philosophy of life that is borne from his vast experiences, both pleasant and difficult. We could all take a page from his book.

If you know Al or simply want to send a card to wish him a happy birthday, I’m sure he would appreciate it. He is truly a member of the greatest generation; someone who gave a lot of himself to his country in trying times. And this, too, is a good lesson for today. Cards and wishes may be sent to Al at Woodlands Park Residence, 141 West River Rd., Waterville, ME 04901.

In an article published in The Town Line on May 24, 2012, Al’s final mission was described by his friend Don Pauley.

September 6, 1943, became known as “Black Thursday” in the 8th Air Force annals. Al was a member of the 563rd Bomb Squadron, 388th Bomb Group. There were three squadrons to a group, each squadron consisted of 12 bombers, and Al, on this misson, was assigned the lead bomber squadron of the low position, “tail end Charlie.” It also meant they would be the first targets of the German fighters who always picked up the low group to attack first because the German fighter pilots knew the higher bomber groups would not fire down on them for fear of hitting their own bombers.

All told, the mission consisted of multiple groups with a total of 338 bombers taking off on the mission. Due to terrible weather conditions, aborted flights and fire from German anti-aircraft battery, and fighter fire, only 150 reached the target. the target was almost totally obscured and mission commander, a Col. Travis, ordered the whole armada to do a figure eight three times trying to get better visibility. All this time, and the anti-aircraft fire took a terrible toll on the bombers as well as using precious fuel. Losses were heavy and 45 B-17s were shot down. Lone Wolf sustained heavy damage and all planes were finally ordered to head back to England after dropping their bomb loads near Stuttgart. Al’s Lone Wolf made it back to France before finally being shot down by a German fighter pilot named Horst Sternberg, who had recorded 23 victories in the air.

Al’s escape on this mission are recounted in the book about his mission, To Kingdom Come, by author Robert J. Mrazek.

With the loss of Lone Wolf, all 12 B-17s of his squadron had been shot down. Al and eight of his crew members bailed out. The ball turret gunner did not make it. Al and seven others of the crew were picked up by different groups of the French underground. The ninth, the navigator, had been wounded and ended up in a German hospital, and spent the rest of the war in a prison camp.

Thus began a series of close calls and narrow escapes that lasted 21 days.