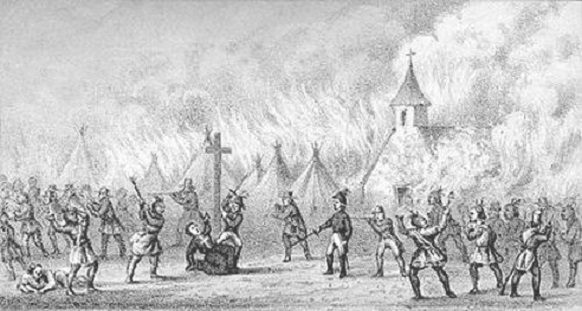 In August 1724, four companies of English soldiers set out from Fort Richmond. On Aug. 23, they drew near the village of Norridgewock. Their arrival was unexpected. Little or no resistance was made by the natives, who fled precipitately, but Father Rasles remained in his cabin, defending himself. The door was broken open, and Lieut. Richard Jaques rushed in, shot and mortally wounded the aged priest.

The Kennebec tribe, also known as Norridgewock and Kennebis, was an early Abenaki band who lived in the Kennebec Valley of Maine. Their name comes from the Kennebec River, which was named after the bay it emptied into — kinipek meaning “bay” in the Abenaki language.

When the valley of the Kennebec was first explored, the Chief Kennebis lived on Little Swan Island, a small island in the Kennebec River opposite what is now the town of Richmond. His home was built of logs in a circular form and strongly fortified.

The Kennebec were divided into four bands, each having its own chief. These included the Sagadahoc who lived between Merrymeeting Bay and the Atlantic Ocean, the Cushnoc who dwelt in the vicinity of Augusta, the Tacconet who possessed and occupied the fertile region that is watered by the Sebasticook River at Waterville, and the powerful Norridgewock, who lived in the village of the same name on the Kennebec River. The different clans all paid homage or political deference to the great chief who resided on Swan Island. At this time, it was estimated the tribes’ warriors numbered about 1,500.

The Kennebec, along with other Abenaki tribes in the area, who were attempting to stop the English encroachment upon their lands, began to conduct Indian raids with regularity on the heavily populated settlements in Southern Maine.

At the time that Father Rasles was in residence at Norridgewock, the English and the French were fighting over the territory of Maine and French Canada, and Rasles exercised a powerful influence over the tribe. He worked to attach the area tribes to the French cause, and before long, the English colonists saw the Kennebec as dangerous enemies.

The Kennebec engaged against the English in four Indian Wars.

Afterward, the remnants of the Kennebec fled to Canada or merged into other Abenaki and New England Algonquian groups. Today there is no distinct Kennebec band.