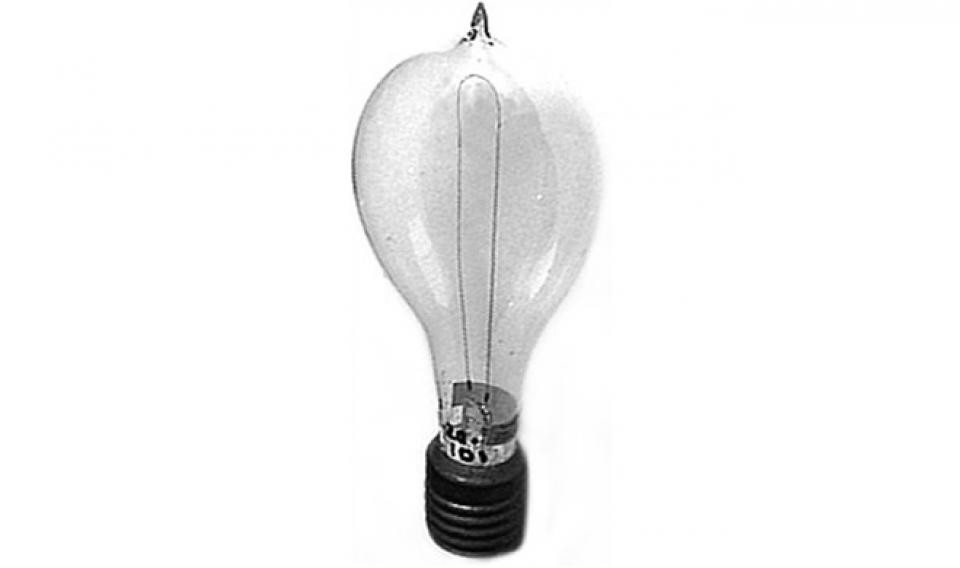 Many local histories find the arrival and expansion of electricity and telephone service noteworthy, especially in Maine’s smaller communities.

As most of us learned in grammar school, Benjamin Franklin is credited with discovering electricity in 1752, by flying a kite into a thunderstorm with a metal key attached to the wet string. His recognition that lightning caused sparks from the key was expanded and put to practical use by, among others, 19th-century British physicist Michael Faraday, whom a Wikipedia article calls one of the fathers of electricity (Nikola Tesla and Thomas Edison share the title).

Faraday invented the electric motor in 1821, beginning a long series of practical developments that made electrical engineering, in Wikipedia’s view, “an essential tool for modern life.” Two early applications were the electric telegraph, which dates from the 1830s and expanded globally in the 1860s, and the first electric lights, in use by the 1870s.

The Fairfield bicentennial history gives 1886 as the year Amos Gerald created the Electric Light Company. (This was the same Amos Gerald who developed and electrified street railways; see The Town Line, Sept. 10.) In 1891, the company built a generating station on Mill Island. The William Connor house, on Summit Street, built in 1858, was the first to have electric lights.

The history further claims that Fairfield was the first Maine town to have electric lights; whether the reference is to private or public lighting is unspecified. Another note records a 1921 town vote to install streetlights in Shawmut; there is no indication whether other villages already had them.

Ruby Crosby Wiggin barely mentioned electricity in her Albion on the Narrow Gauge. The first lights were in 1920, she wrote, starting on the Unity Road and at Albion Corner and spreading town-wide in following years.

Alice Hammond, in her Sidney history, focused on the value of electricity to farm families. She wrote that Central Maine Power Company (CMP) extended its line from Augusta along Pond Road in 1925. Power reached Bartlett Road by 1927, part of River Road by 1933 and Middle Road by 1937.

The first night after the Wendell Bragg family on River Road got their house connected to the power line and lights installed, Hammond wrote, they turned on all the lights and went outdoors to admire the effect.

Electricity expanded Sidney’s dairy industry, as electric milking machines and milk coolers made large-scale production possible. Hammond wrote that Ernest Wyman was among the first farmers to buy a milking machine, and Dean Bailey had the first milking parlor, leading his cows to the machine instead of moving the machine from cow to cow.

Electricity was even more essential to the broiler industry, important in Sidney and much of the rest of central Maine from the 1950s into the 1970s. Multi-story chicken houses with thousands of chickens required lights, heat, and automatic feeding and watering devices.

Hammond paid special attention to electric radios, a new connection to the outside world after World War I. Six Sidney households had radios in 1925, she wrote, and neighbors would visit just to listen. There were 37 radios in town in 1928 and 65 by 1933.

In China, the bicentennial history says China Telephone Company manager E. J. Thompson asked Central Maine Power Company in 1920 to provide service to South China village. CMP agreed if residents would pay and would put up the necessary poles. They did, and in 1921 and 1922 houses acquired electric lights, water pumps and other amenities.

The Ladies’ Aid Society raised funds for the initial project and, the history says, supported South China streetlights for a few years. Town voters appropriated $100 for streetlights in 1923; skipped funding in 1924 and 1925; in 1926 and 1927 gave South China $100 and in 1927 added $75 for China Village street lights. Since 1928, when streetlights for the whole town cost $420, town meeting voters have routinely approved annual expenditures; the figure for 2020, included in the public works budget, is $10,000.

In Branch Mills, the village that is partly in China and partly in Palermo, the Village Improvement Society first explored replacing kerosene street lamps with electric lights in May 1919, Milton Dowe wrote. A four-man committee was appointed and apparently got in touch with CMP, without success.

By the spring of 1927, an enlarged committee negotiated an agreement with the company to run a line from South China, if Palermo would guarantee to pay $1,500 annually for five years. Committee member Harold Kitchen persuaded enough residents to sign up, some for $50 a year and some for less, to raise $1,200.

CMP offered to lower the guarantee if it could save money by using local materials and labor for the poles, Dowe wrote. The town bought poles and found a local contractor to put them up. CMP credited the final $100 when Palermo residents did the clearing needed to bring the line from Dirigo Corner to the village.

It was Aug. 8, 1928, that the electric lights were turned on in Branch Mills, Dowe wrote, and on Aug. 10 residents celebrated at the Grange Hall in the village.

Weeks Mills village had electricity by or soon after 1922, according to town records of pole permits. China Village, at the north end of town, acquired Central Maine Power service about 1927, the bicentennial history says. Earlier, local residents Everett Farnsworth and E. C. Ward shared power with neighbors from their noisy generators at opposite ends of Main Street. 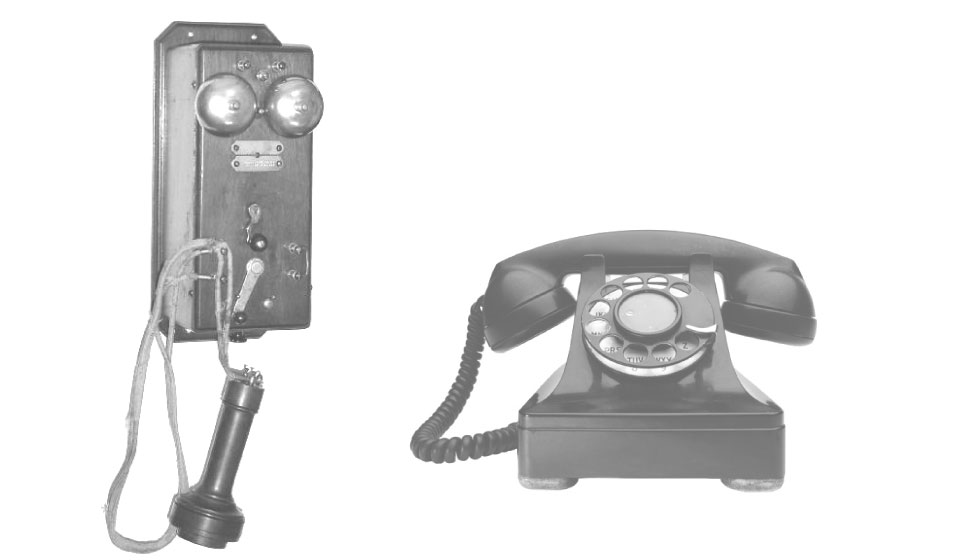 Many of us also learned in school that Alexander Graham Bell invented the telephone. Actually, Wikipedia says, several other men could be credited as well, depending on definitions and whose story is believed; but Bell was the first to patent it, in 1876.

At first used primarily by businesspeople, the telephone began to appear in private homes (usually wealthy people’s) before 1880. Widespread household telephone service developed in central Maine in the first two decades of the 20th-century.

For example, Sidney historian Hammond, citing a 1976 book published by the Independent Telephone Pioneer Association’s New England Chapter, wrote that Sidney’s service started in 1901, when the New England Telephone and Telegraph Company set up a switchboard in Silas Waite’s house. The headquarters moved from house to house, ownership changed and lines and services were added over the years.

Hammond wrote that in addition to letting people talk with friends, the telephone system was a public address system and a fire alarm. To announce a town meeting, Grange supper or other event or to report a fire, the operator had a special ring that would let everyone on the service pick up.

In 1950, when Lewis Johnson bought the company and moved the switchboard to his Middle Road home and his wife Thelma became the operator, Hammond wrote that service became all day every day. Until then, only emergency calls were allowed at night and Sunday and holiday service was limited to an hour in the morning and an hour in the afternoon. Hammond’s history of Sidney has a photo of the Johnsons and their equipment.

In the winter of 1959-1960, Hammond wrote, Johnson converted from the crank phones to a dial system, building a separate building for the additional equipment. In 1965, Continental Telephone Company of Maine bought and incorporated the former Sidney Telephone Company.

Hammond added that Sidney had a second, smaller telephone company called the Farmers Line; she gives no dates. Some families started with Farmers and switched to Sidney Telephone; others used both services, she wrote.

In Vassalboro, the New England Telephone and Telegraph Company was operating by 1903; historian Alma Pierce Robbins found in town meeting records the company’s request to “change poles” on private land at Riverside in the southern end of town and to install a new line along the road from North Vassalboro to the Kennebec.

W. J. Thompson organized the China Telephone Company in South China in 1904 and was its general manager, president and head employee until illness forced him to retire in 1947. The company started with 29 subscribers, mostly businesses. Three public pay phones were available, in stores in South China and Weeks Mills and a private home at Dirigo Corner.

Thompson had two assistants. Howard L. Fuller was with him from 1904 and succeeded him as general manager in 1948, and R. C. Maxwell joined in 1906 and stayed with the company until he died in 1948. The bicentennial history says the three men and their families did everything from managing inventory and billing to repairing lines. Thompson was also president of the Maine Telephone Association in the 1920s.

According to the history, Maxwell used to collect bills door-to-door. When he was paid in produce, like apples or potatoes, he would substitute cash from his personal salary, $2.50 a day. The company’s first motorized vehicle was a motorcycle that did not survive Thompson’s handling; it was followed by a Model T and a Dodge touring car, both second-hand.

Starting with two lines, in South China and China Village, China Telephone connected more and more area residents. By 1923, according to a Maine Public Utilities Commission report, the company served people in all or parts of China, Palermo, Vassalboro and Windsor. The bicentennial history says long distance service was added– no date is given – via New England Telephone Company, in North Vassalboro.

The history says the company introduced dial telephones between 1959 and 1962 and in 1967 provided the first touch-tone telephones in New England.

On May 31, 1905, she wrote, the Unity Telephone Company asked a special Albion committee for permission to put up poles and string lines throughout the town. The committee approved the request on June 21. On July 29, the Half Moon Telephone Company, in Thorndike, made a similar request, which was approved Aug. 15.

The Albion committee prescribed pole distances from each other and from roads, wire height and other specifications for both companies. Wiggin wrote that Half Moon got a head start, connecting three families’ businesses and houses in the fall of 1905, and charging them nothing. In 1906 Half Moon continued expansion and connected Albion with the exchange in Thorndike.

Unity Telephone started its construction in 1907 or 1908, Wiggin wrote. For some years the two companies competed; Wiggin wrote that in some places, Half Moon lines ran along one side of the road and Unity lines along the other.

People served by one line could not talk directly with people on the other. Some storekeepers signed up with both companies; if the two lines’ telephones were close enough to each other, someone in the store could allow cross-communication by holding them together.

Wiggin did not give the date at which Unity Telephone Company became Albion’s only telephone-service provider.