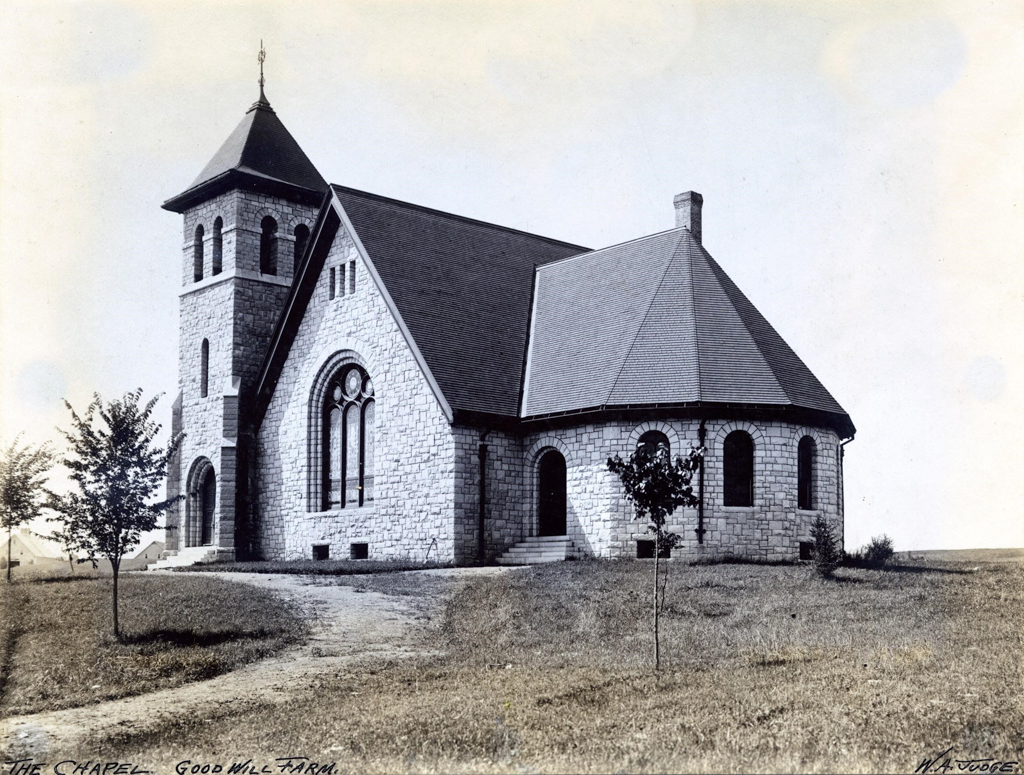 The Goodwill-Hinckley campus has more buildings of historic interest than there was space to describe in the May 20 The Town Line article, including a third school included in the boundaries of the National Register area.

The Averill School, later Averill High School and now Averill/Alfond School, dates from 1930. Originally a two-story Georgian Revival brick building, with chimneys on either end, it acquired two wings and more chimneys on its new ends.

After listening to school founder George W. Hinckley’s requests for a new school nearer the center of campus, Keyes Fibre executive Dr. George C. Averill (1869-1954) and his second wife, Frances Mosher Averill (1873-1962), provided money for the school, and remained important supporters of Goodwill-Hinckley for years. (Averill also bought, in 1944, the Great Pond property for the Boy Scouts to build Camp Bomazeen, in Belgrade.)

Later, Maine philanthropists Harold and Bibby Alfond supported redoing the Averill School interior and adding a middle school; the building was rededicated in September 2000. The school’s online information says it is coed, serving students in grades six through 12, with a 4:1 student:teacher ratio.

The Averill family also provided Averill Cottage. An on-line photo caption relates its story: on Jan. 2, 1927, during a service in Moody Chapel, Hinckley announced a gift of $20,000 to build another girls’ home and name it in honor of Leah S. Averill, George Averill’s mother. The donor was identified as Averill’s second wife, Frances B. Mosher, of Bangor. Maintenance Superintendent James Tuttle built the two-and-a-half-story wooden Colonial Revival residence with its spacious porch; it was dedicated Sept. 18, 1927.

Frances Moody, of Bath, mentioned in the May 20 article as the funder of the Moody School building, made the donation that led to construction of Moody Memorial Chapel. The stone chapel was built in 1897 and expanded in 1927, after the congregation outgrew the original space.

The architect was Wilfred Mansur (1855-1921), described as the most prominent architect in Bangor in the late 1800s and early 1900s. Most of his work was done in Bangor, including the Penobscot County courthouse, the Mount Hope Chapel and Office in Mount Hope Cemetery and several buildings in Bangor’s historic district.

Moody Chapel is in Romanesque style, which Mansur used on other buildings as well. It features arched windows and a square bell tower. Two stained-glass windows honoring Frances and Mary Moody face east and west, one showing flowers and the other fruit.

The windows were created by Cyrus Hamlin Farley (1839-1934), of Portland. A web page from Church on the Cape UMC, a Cape Porpoise church with six Farley windows, says Farley began a career making nautical instruments; switched to eyeglasses; and then switched again to windows, ornamental and ordinary.

Goodwill School closed in 1909 after the Maine attorney general found its effort to become a college preparatory school violated its charter and state funds were withdrawn. Leaders reorganized and raised money and the school reopened.

After the reorganization, a 2011 Harold Alfond Foundation gift made it possible for Kennebec Valley Community College to acquire part of the Goodwill-Hinckley campus, including Moody Chapel. The college, the foundation and “a team of preservation professionals” went to work to restore the building.

As with the Moody School, extensive reconstruction was needed, including “reattachment of veneer stones to the wall core,” rebuilding “the two buttresses at the front of the building,” and restoring the bell tower from lobby to roof. 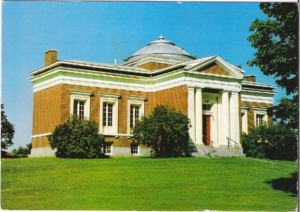 The brick and granite building is in Classical style. Photos on line show tall pillars flanking a central entrance, with a large dome over the center section and a chimney at the end of each wing. There are basement windows below tall main-floor windows.

An on-line site explains that Hinckley always realized that his school needed a library. As soon as he started it in 1889 he began soliciting books, and within a few years had 150.

By 1904 the library had grown to 5,000 volumes. The on-line site says on New Year’s Eve 1904 the original Moody School (built in 1895; see the May 20 issue of The Town Line, which did not include this recently-discovered information) burned down and the books were lost.

When Hinckley started rebuilding in the summer of 1905, he sought funding from Andrew Carnegie, leading to the grant that allowed construction of the Carnegie Library.

Architect Ross was born in Connecticut, son of architect John Wesley Ross (1830-1914), he practiced in Buffalo and New York City before moving in 1901 to what Wikipedia calls Negro Island off Boothbay Harbor. Some of his many other works include the Pittsfield Public Library (on the National Register of Historic Places) and the Old Town Public Library, both dated 1904.

(A July 27, 2020, letter to the editor of the Boothbay Register, signed by six couples who made up the Negro Island Property Owners Association, announced the island’s name had been changed, by unanimous vote, to Oak Island. The original name dated to the mid-1700s, the letter said, and had been making the island’s residents “increasingly uncomfortable.” The new name was chosen because of numerous oak trees and as a symbol of “strength, endurance and serenity.”)

The first Goodwill-Hinckley librarian was Hinckley’s sister, Jane E. Hinckley. (She was also the first Matron, the first office employee, and the organizer and first director of the boys’ choir, among other roles.) The on-line site mentioned above as a source of the library’s history says the library’s collection had expanded to 12,000 volumes by the time she died in February 1914.

The Prescott Memorial Administration Building was designed by New York architect Edgar A. Josselyn and built in 1916. The application to add the campus to the National Register of Historic Places gives the additional dates 1921 and 1922, and one on-line source says the original building burned.

The two-story brick building is in Georgian Renaissance style. On-line photos dated 1916 and 1926 each show a square three-story central tower with an arched window above the entrance and above that level an impressive wooden cupola. The square bottom of the cupola has four clock faces; above them, two receding round towers with windows are topped by a small golden dome and a weathervane.

An on-line slideshow says Portland-based landscape architect Carl Rust Parker (1882-1966) laid out Prescott Drive, a main road through the campus, and sited the Prescott building. He explained to Hinckley that the building should be “in a commanding position, and be easily accessible from the railroad, highway and the rest of the campus.”

Building and (presumably) roadway were named in honor of Amos L. Prescott (1853-1926). Born in South Berwick and later moving to Passaic, New Jersey, Prescott was a successful manufacturer of stove polish. He served on the board of Good Will Homes and donated money for the building.

The single-story brick Kent Woodworking Shop named in the 1986 application for Historic Register listing is another of Josselyn’s Georgian Renaissance buildings, built in 1919. On-line information is lacking.

The woodworking shop might have been successor to the 1903 Quincy Manual Training Building, where students from Goodwill and from outside, mostly boys, learned “carpentry, drafting, printing, and metal work.” The building now houses the L. C. Bates Museum (see the May 20 issue of The Town Line). 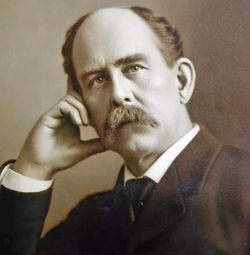 George Walter Hinckley (1853-1950), a Connecticut native trained as a minister and a teacher, wanted to help underprivileged and troubled youngsters. An on-line history describes his seeing another child arrested for trying to steal from a lunch pail because he was starving. As a teen-ager, Hinckley persuaded his parents to take in an orphan boy.

By 1889 Hinckley was in Maine, “doing fieldwork for the American Sunday School Union of Philadelphia.” He bought the 125-acre Isaac Chase farm, in Fairfield, owned by former Senator Margaret Chase Smith’s grandparents. The farm became the basis of Goodwill-Hinckley, and Hinckley devoted most of the rest of his life to raising money to support and expand it.

Walter’s daughter Harriet married Donald Price, whose parents had been school employees, and the younger couple also worked there.

The present campus offers a variety of walking trails, a bird sanctuary, an arboretum, an artificial pond, a picnic area and gardening and farming spaces, including greenhouses. Located on the campus are:

The Goodwill-Hinckley website, provides a telephone number – 207-238-4000 – and an email address –info@gwh.org. It shows a map of trails and monuments on campus and invites people to schedule a visit. The name Goodwill-Hinckley refers to an organization as well as the physical property; donations are welcome. 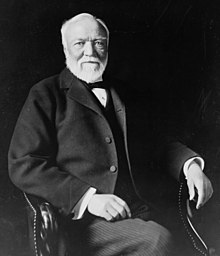 Andrew Carnegie (1835-1919) was born in Scotland, emigrated to the United States when he was 12, invested wisely and became for a time the richest man in America, even richer than John D. Rockefeller. He was noted for giving away almost all of his fortune through foundations and organizations that supported the arts, science, education, world peace and other causes.

A “Carnegie library” is a library built with financial assistance from a Carnegie fund. Wikipedia says between 1883 and 1929 Carnegie money helped build 2,509 libraries world-wide, including 1,689 in the United States. Others were in places as distant as South Africa, New Zealand, Mauritius and Fiji.

ShineOnCass event includes education and PJ party with baby animals MAINE MEMORIES: A fun birthday when I was a girl
Scroll to top