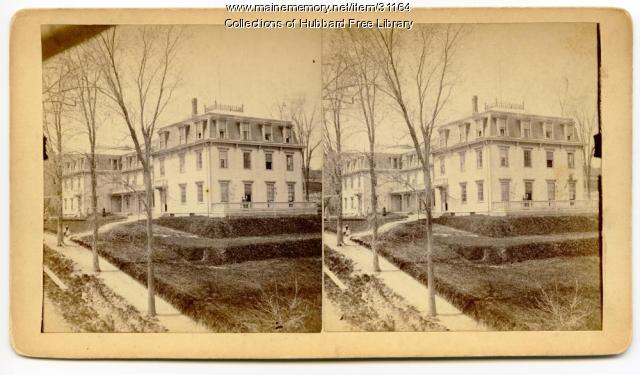 In preceding articles, readers have learned a bit about three private high schools, Cony Female Academy, Coburn Classical Institute and Oak Grove Seminary (see the issues of The Town Line for Sept. 2, July 29 and July 22, respectively) and about some of the public high schools in Augusta and Waterville (in the Aug. 26 and Sept. 2, The Town Line issues, respectively).

Remaining to be described are numerous other 19th-century public and private schools in central Kennebec Valley towns. A few are well documented; for most, local histories offer only tantalizing glimpses.

For example, Whittemore wrote in his history of Waterville that “private and corporation schools” played important roles, starting in 1823 when “Miss Pettengill” ran “a school for the education of young ladies.”

In 1824, John Butler and “Miss Lewis” opened another school “which with its modern methods and apparatus won enthusiastic approval.” A successor, before or in 1902 when Whittemore’s history appeared, was Miss Julia Stackpole.

Two private academies mentioned previously are Hallowell Academy, in Hallowell, and China Academy, in China Village. The latter will be described in a future article.

There were two 19th-century academies in Hallowell. Their histories are intertwined with each other and with the public high school; your writer wishes her readers luck trying to untangle them.

The first, Hallowell Academy (in one source called Hallowell Academy for Boys), was chartered in 1791. (Kingsbury wrote in his Kennebec County history that Hallowell and Berwick academies, chartered the same day, were the first in what later became the State of Maine.)

Hallowell’s second, Hallowell Classical and Scientific Academy, opened in 1868 (online source); or was incorporated Feb. 8, 1872 (Maine Congregational Church annual meeting minutes, 1872-1874); or as of 1873 was the new name for the earlier Hallowell Academy (Kingsbury); or, most definitively, was scheduled to open Jan. 1, 1874 (online The Maine Journal of Education for 1873). Bob Briggs, in his 1996 history Around Hallowell (found online, delightfully illustrated with old photographs), called it on one page Hallowell Classical and Scientific Institute.

The Academy chartered in 1791 opened for classes in a newly-built schoolhouse in 1795. Briggs wrote that the first two academy buildings burned down; Kingsbury mentioned only one destructive fire, in 1804, after which, he said, the building was replaced a year later.

In 1807, Kingsbury said, the school trustees bought a Paul Revere bell for the belfry. Briggs wrote that in 1841, a brick building was put up. The Academy and (public?) high school were “united” from 1868 until the Classical Academy opened in 1873, he said.

The photo illustrating these words, dated about 1880, shows a group of students, the women in skirts from ankle-length to floor-length, in front of what must be the main entrance. Four two-story Doric columns are spaced across the width of the brick building, with two large doors on either side of a window behind them.

Briggs wrote of the 1795 Hallowell Academy that “students received their secondary education under some of the ablest and best educated men in the state.”

Kingsbury listed the first 28 teachers, up to 1838, and their years of service. One, surnamed Moody, stayed for eight years, and Curtis taught for three years. Six others were there for two years; the remaining 20, Kingsbury said, stayed only one year each.

After the 1795 Academy closed, high school age students attended the Hallowell Classical Academy, the Maine Memory Network says. As noted above, the Classical Academy almost certainly opened at the beginning of 1874.

The Classical Academy was on Central Street at the intersection with Warren Street. The Memory Network describes it as a co-ed college preparatory boarding and day school. It was established to promote Christian education and to train young people “in such languages and in such of the arts and sciences” as the school trustees chose.

The school was “affiliated” with the Congregational Church in Maine and, Kingsbury added, “a feeder for Bowdoin College.”

The 1873 Journal of Education, which this writer accepts as an authoritative, contemporary source, says the Maine Conference of Congregational Churches established the Classical Academy. A Congregational minister, Rev. H. F. Harding, was the academy’s first secretary and treasurer; his report to the statewide church meeting in 1874 mentioned connections with Bowdoin and with Bangor Seminary.

The Classical Academy was intended to be Hallowell’s high school and also a state institution to prepare “the sons of Maine” (daughters were not excluded – see below) “for her Colleges and Theological Seminary, without the necessity of going out of the State.”

The Academy was on an 11-acre lot, with views up and down the Kennebec. It started with three buildings, the article continues: “the old Hallowell Academy, which is to be used for recitation rooms” plus a new boarding-house that would accommodate 40 boys in double rooms and a new girls’ boarding house.

The latter is described as three stories with a Mansard roof, 160-feet long with two 40-foot-wide wings, “containing 76 rooms.” The rooms were arranged with two double bedrooms and a “parlor” for each four students.

Gas lighting was planned for the new buildings. The girls’ dormitory had steam heat, “bathing rooms” and a generous supply of “pure spring water,” according to the report in the 1872-74 minutes of the state Congregational Church meetings.

The Journal article said Classical Academy leaders intended to build “a much larger and much better edifice” as soon as they had the money. As of 1873, they had raised about $70,000, mostly from the City of Hallowell, and gotten a $4,000 bequest (the Memory Network, too, mentions a will). Additionally, the Journal article said, “Mrs. Eastman,” a former resident now living in Italy, had donated a $1,000 scholarship and “is also making a fine collection of paintings for the school.”

Classical Academy students came from Hallowell and from other parts of Maine, Illinois, California and New Brunswick, the Memory Network says.

The Congregational meeting minutes mentioned above describe the success of the Classical Academy in its first almost-two years. By 1874, James G. Blaine (then Representative in the U. S. Congress) was President of the Board of Trustees; Harding was still secretary and Joshua Nye, of Augusta, had succeeded him as treasurer.

There were 108 students and a staff of seven teachers and two matrons. Each dormitory had a matron; two teachers also lived in the dormitories and had supervisory responsibilities. Three were women; the teacher in the boys’ dormitory was a man.

Subjects taught were English (both English Studies and English Literature), French, German, Latin, Greek, history, natural sciences, mathematics, “Mental, and Moral Science,” bookkeeping, penmanship (these two subjects were on one list, not on a second), piano and vocal music and drawing and painting.

There were three departments, which the report described as follows:

The Classical Course offered “thorough and ample preparation for the most advanced Colleges.”

The Seminary Course was “especially for young ladies,” “to carry their training and culture considerably beyond that given in our public schools.”

The English and Scientific Course gave students of both sexes “the most valuable studies for a shorter course.”

Memory Network photos of the Classical Academy from the early 1880s show two large squarish three-story buildings connected by a three-story rectangular building. The lower stories are white, probably clapboard (possibly brick). The upper story, with a pediment above and below it, appears to be a shingled mansard roof, with four single flat-topped windows in one end and three across the front.

(This description is similar to the Journal of Education’s 1873 description of the new girls’ dormitory.)

Briggs’ book includes a photograph of a quite different building, dated about 1885 and identified as the Classical Academy. This building is rectangular, clearly brick, three stories with no mansard roof. The windows are paired under arches. There appear to be no connected buildings, although at one end is a “strange invention” (Briggs’ words) that looks like a windmill atop a two-story tower.

(Perhaps this is the building the Journal said Academy trustees were in 1873 waiting for money to build?)

The Memory Network has a photograph, dated “circa 1900,” of the 1887 high school, a two-story brick building with towers on both ends, one three stories tall, and a triple-arched front entrance. Accompanying information says it was on a lot “used exclusively for education since Hallowell Academy opened in 1795.”

Briggs’ version is that in 1887 the Hallowell school committee agreed to establish a high school separate from the Classical Academy. In 1890, he continued, the “City fathers” renovated “the old Hallowell Academy building,” implying that the 1887 building was not constructed from scratch.

The Maine Memory site says the 1887 high school was converted to a primary school after a 1920 high school building opened “on the site of the old Classical Academy,” that is, at the intersection of Central and Warren streets.

Hallowell might have had a third private high school. Yet another on-line site, called Maine Roots, includes an undated reference to “a female academy” started by John A. Vaughan “where the granite offices now are, which continued a number of years.”

CORRECTION: A correction to the story on the Asa Bates Memorial Chapel, or Ten Lots Chapel, in Fairfield that ran in the Aug. 5 issue of The Town Line: the people responsible for repairing the large windows were Pastor Gene McDaniel and his father, Gary McDaniel, who did the reglazing. Kay Marsh did the painting, and Howard Hardy offered encouragement.