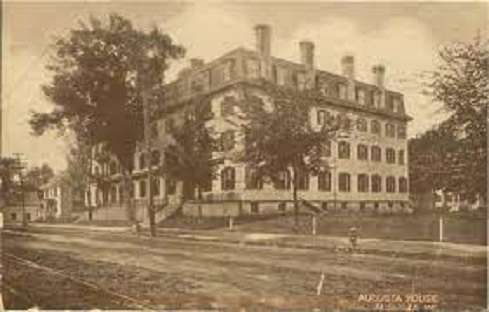 Your writer recognized a question, probably unanswerable, left over from last week’s mention of Dr. James Tuell, of Augusta. Why had he chosen to attend Jefferson Medical College in Philadelphia, when Maine had a medical school at Bowdoin, founded in 1820, and there was one at Dartmouth, and numerous others closer than Philadelphia?

A review of Henry Kingsbury’s chapter on the medical profession, in his Kennebec County history, found that among area doctors to whom he devoted at least a paragraph (many others were merely listed), half a dozen were identified as Jefferson Medical School graduates. Dr. Frederick Charles Thayer’s chapter on the medical profession in Edwin Carey Whittemore’s Waterville history added two more, plus two who did post-graduate work at Jefferson.

Therefore this week’s article will be the first of two about these doctors (and some of their family members). It is unlikely to explain why any of them chose Jefferson Medical College.

The school, according to on-line sites, was founded in 1824 by a surgeon named George McLellan (Dec. 22, 1796 – May 9, 1847). It is now listed on line as Sidney Kimmel Medical College at Thomas Jefferson University in Philadelphia.

(Kingsbury and other sources also refer to other doctors trained at the [unnamed] “medical school at Philadelphia”; some of the references could be to Jefferson. An on-line source lists six “Extinct Philadelphia Medical Schools” that operated between 1838 and 1881, none of them Jefferson.)

In chronological order, as best your writer can determine, the first Jefferson graduate Kingsbury knew about was Samuel Louis (or Lewis) Clarke (or Clark).

Clark(e) earned a mention in David Thurston’s 1855 history of Winthrop, as well as in Kingsbury’s history. Both described him as a Winthrop native, son of Captain Samuel Clark(e) (and Samuel’s wife Susannah, Thurston added).

Thurston wrote that Dr. Clark “had acquired a very respectable degree of skill in the healing art.” He practiced in Winthrop for a while and then in Bangor.

The only date either historian gave was Thurston’s statement that Clark died in August 1851 at the age of 45. From this information your author deduced that he was born in 1806 or 1807, and estimated that he graduated from Jefferson in the 1830s.

Dr. Cates was the first of four children of Edmund Cates (1796-1872) and Anna Bunker Cates (1799-1865), who moved to Vassalboro from Gorham. After graduating from Vassalboro Academy, he “studied medicine” (Kingsbury gives no specifics) and then went to Jefferson.

From Fall River, Dr. Cates returned to Vassalboro and, Kingsbury wrote, practiced medicine there until he moved to California in 1886, where he died less than two years later.

The Find a Grave on-line site says Margaret was born in Rhode Island and died and is buried in Whittier, California. She apparently remarried after Dr. Cates’ death, as a photo shows the plaque on her grave identifying her as Margaret B. Dorland.

A Dec. 20, 1952, Waterville Morning Sentinel piece by Fred D. McAlary, copied in the summer 2021 issue of the Vassalboro Historical Society’s newsletter, says Charles Cates was a farmer as well as a doctor; in 1858, McAlary wrote, he built a house in East Vassalboro and ran a farm there.

McAlary’s article is about Charles Cates’ grandson, Samuel C. Cates (David’s son), also a doctor and a farmer, born in 1890 and in practice in Vassalboro since 1925. The Cates house off South Stanley Hill Road was partly a hospital; one room, McAlary said, used to be Dr. Charles Cates’ office.

Charles Cates is buried in Vassalboro’s Friends Cemetery, as are his son David and David’s wife Anabel. Son Abraham died in Minnesota and is buried in Lakewood Cemetery, in Minneapolis.

Dr. James Fanning Noyes (Aug. 2, 1817 – Feb. 16, 1896), according to Thayer and an 1812 edition of American Medical Biographies (found on line), had an unusually well-traveled life that included brief periods in Waterville. His specialty was ear and eye medicine (otology and ophthalmology), including eye surgery.

He was born in South Kingston, Rhode Island. He attended nearby schools and in 1842, for unexplained reasons, began studying medicine in Waterville with Dr. Joseph F. Potter. He went on to Harvard Medical School and then to Jefferson.

After his 1846 graduation, he did post-graduate work in New York City until he became assistant physician at the United States Marine Hospital, in Massachusetts. He came back to Waterville in 1849 and, the biography says, “soon secured a large practice” – which he abandoned in 1851 (1852, Thayer wrote) to go into partnership with Dr. Potter, in Cincinnati.

The biography says in 1855 he studied in Berlin and in 1859 in Paris, implying he was in Ohio between trips. Thayer, however, wrote that after two years in Europe beginning in 1854, he came back to Waterville “where he entered upon a large practice.” After another year in Europe, mostly in Paris, he practiced successfully in Waterville from 1859 to 1863, doing major surgery and serving as a consultant.

In 1863 he moved to Detroit, Michigan, and had an active practice there. The medical biography includes a long list of papers Noyes wrote for medical publications, with titles like Temporary Blindness from Lead Poisoning, An Improved Iridectomy Forceps, New Operation for Strabismus and The Ophthalmoscope’s Contributions to General Medicine.

Both sources listed medical organizations to which he belonged; and both mentioned his interest in the Oak Grove Insane Asylum in Flint, Michigan, where he donated money to provide an amusement venue for the inmates, which was named Noyes’ Hall.

Thayer added that in his will, Noyes stipulated that his body should be cremated “for sanitary reasons and as an example in the interest of humanity.” His instructions were followed, Thayer wrote; the ashes are in Riverside Cemetery, in Pawtucket, Rhode Island.

Dr. Nathaniel Rogers Boutelle (June 13, 1821 – Nov. 23, 1890), Jefferson 1847, was the sixth child and fourth son of Timothy and Helen (Rogers) Boutelle. Thayer described Timothy Boutelle as one of Maine’s most eminent lawyers in the early 1800s. Dr. Boutelle graduated from Waterville College and then Jefferson, and did a year of post-graduate work in Pennsylvania.

He established his practice and his family in Waterville, marrying Mary Keely (April 6, 1833 – Feb. 14, 1920), daughter of Waterville College professor G. W. Keely, on Oct. 14 or Nov. 8, 1852 (sources differ), and fathering two sons. In the 1890 census, Nathaniel and Mary Boutelle were living on College Avenue, an on-line genealogy says; another source gives the exact address, 33 College Avenue.

Son Timothy was born in 1853 and died in 1864, according to his gravestone. An on-line genealogy gives a birth date in September 1852, before his parents’ wedding, and a death date of Sept. 3, 1864; the pre-marriage birth date seems doubtful in a prominent family. Son George Keely, born March 15, 1857, became a lawyer like his grandfather, was still in practice in Waterville in 1904 and died June 18, 1938.

Thayer wrote that Dr. Boutelle left Waterville at least twice. In 1857, he did unspecified post graduate work in an unspecified country in Europe. In 1864, he volunteered in the Civil War and “performed very efficient service” in a Fredericksburg hospital.

Thayer said Dr. Boutelle was among the founders of the Maine Medical Association and was considered “one of the most skilled and learned physicians of the State.” The on-line genealogy adds that Colby College awarded him an honorary degree in 1860.

His obituary in the Jan. 15, 1891, “Masonic Post” called him one of the earliest Maine residents to breed Jersey cattle, developing a widely recognized high-quality herd. The writer said he was “an earnest and influential mason, although not fond of working offices.”

Nathaniel and Mary Boutelle and their two sons are buried in Waterville’s Pine Grove Cemetery.

On-line sites Wikipedia, Find a Grave and American Medical Biographies say the senior James M. Bates was born in Greene. He attended Harvard Medical School; served in the War of 1812 as a surgeon; and after the war was briefly in charge of the Buffalo, New York, “general military hospital.”

Resigning that job, he came back to Maine and practiced medicine in Hallowell from 1815 to 1819 and in Norridgewock until 1830. In March 1831 he was elected to Congress.

From 1845 to 1851 he was “superintendent of the Maine State Hospital for the insane.” He practiced until he died, at age 92, in Yarmouth; he is buried in Old Oak Cemetery, in Norridgewock.

The James M. Bates who graduated from Jefferson, Kingsbury wrote, was born in Norridgewock and started studying medicine in Augusta in 1848 before attending Jefferson. He practiced in South China from May of 1851 to 1854 and in Sidney for another five years before moving to Yarmouth.

(Wikipedia’s story of his life sends him from Jefferson directly to Yarmouth to work with his physician father. But Alice Hammond, in her history of Sidney, confirmed Kingsbury’s account, as she talked about the Rufus Davenport house near Bacon’s Corner, on Middle Road.

(The house “was the home of Sidney’s resident doctors for many years,” Hammond wrote, after Dr. Bates bought it in 1855. He sold it in 1858, to Dr. John Cushing; and Hammond named the other doctors who owned it in succession into the 20th century.)

Dr. Bates enlisted in the 13th Maine Infantry as a surgeon on Dec. 5, 1861, the Find a Grave site says. He was honorably discharged June 6, 1865. Civilian positions included president of the Maine Medical Society and, per Wikipedia, “a trustee of the State Reform School” and of Yarmouth Academy and a member of the Yarmouth school board for over 30 years.

Wikipedia says Dr. Bates and his wife, Hester Ann Sawtelle (March 31, 1829 – July 21, 1913), had at least five children, including a daughter named Hester, who became a physician. An on-line genealogy and the Find a Grave on-line site list four children; the daughters are named Charlotte Maria, who died before her 12th birthday, and Harriette.

One of the sons, George Fred Bates (1860-1944) was the third generation to become a doctor. He trained at Bowdoin and Long Island College Hospital, in Brooklyn, and was described in an obituary as “one of the leading practitioners in the Red River Valley” in Traill County, Minnesota. He returned from Minnesota to the Portland area before the 1940 census.

Dr. James Bates, his wife and four children are buried in Riverside Cemetery, in Yarmouth

Kingsbury said he attended Litchfield Academy and “read medicine in Gardiner and Boston” before going to Jefferson and graduating in 1859. He opened a practice in Pittston and in 1862 moved to Gardiner, where he also ran a drug store from 1867 until he died. On May 26, 1865, he married Carlista Colby.

The author of an 1895 history of Litchfield and account of its centennial, found on line, called him “one of the leading physicians in Gardiner.

Another on-line site says Dr. Plimpton appeared as a Gardiner physician in the 1870 and 1880 census records; in the 1880 census, he is listed as a cripple.

Read other articles in this series here.