After the three Maine Supreme Court Justices whose biographies were summarized last week (see The Town Line, Dec. 10) the next Chief Justice listed as an Augusta resident was the 15th, William Robinson Pattangall (1865-1942). 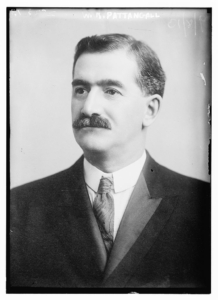 Pattangall was born June 29, 1865, in Pembroke, almost on the Canadian border. He graduated from the University of Maine (then Maine State College), Class of 1884, and studied law in a Calais office.

Maine Chief Justice Raymond Fellows’ short 1954 book about Pattangall (not a biography, Fellows wrote) says his father was a sailor and shipbuilder, and Pattangall went to sea in a Pattangall-built ship for two years. Then he worked in shoe factory offices in Massachusetts and New York before returning to Machiasport in 1891, where he taught high school, including navigation courses.

By continuing to study law, Pattangall earned admission to the Maine bar in April 1893. He practiced in Columbia Falls, then Machias, and briefly in Bangor until 1905, meanwhile serving in the Maine House of Representatives in 1897-1898 and 1901-1902 and from 1903 to 1909 editing the weekly Machias Union. In those years he authored satirical political articles, later collected as The Meddybemps Letters (Meddybemps is close to Pembroke) and The Maine Hall of Fame. Fellows’ book includes the two books.

In 1905, Fellows wrote, Pattangall was invited to become editor of the Waterville Sentinel, so he and his family moved to Waterville. In addition to practicing law, he was mayor of Waterville and Maine Attorney General from 1911 to 1913 and Attorney General again in 1915; and an unsuccessful Democratic candidate for Congress in 1904, 1913 and 1914.

(Current Governor Janet Mills, when she was sworn in for her second term as Attorney General on Jan. 7, 2013, said she was following Pattangall’s pattern: she had served as Maine’s 55th and now 57th Attorney General, and Pattangall had been the 32nd and 34th, the only two she knew of who took a break between terms.)

In 1915 the Pattangalls moved to Augusta. From there he ran unsuccessfully for governor in 1922 and 1924. He was a delegate to the 1924 Democratic National Convention.

He was also, Fellows wrote, an extremely successful lawyer, so good that “his attainments and qualifications for high judicial office could no longer be overlooked.” Consequently, on July 2, 1926, Republican Governor Owen Brewster appointed Democrat Pattangall an Associate Justice of the Maine Supreme Court.

In following years, Pattangall became so disillusioned with President Franklin Roosevelt’s New Deal that he switched parties. One on-line source says the change was not long before he was appointed Chief Justice on Feb. 7, 1930, by Brewster’s Republican successor, Governor William Tudor Gardiner.

Sources describe him as a supporter of public education, civil rights and President Woodrow Wilson and a determined opponent of the Ku Klux Klan, which was active in Maine in the early 20th century. Fellows wrote that Pattangall believed judges, and everyone else involved in the law, had two responsibilities: to protect “constitutional rights and liberties,” specifically individual and state rights against federal incursions; and to adapt the legal system to the contemporary world, slowly and thoughtfully.

When Bowdoin College awarded Pattangall an honorary Doctor of Laws during his tenure as Chief Justice; the accompanying citation referred to his earlier career as a journalist and editor. It praised his literary achievements, calling him “a master of epigram and satire.”

Fellows, who knew Pattangall, mentioned his sense of humor, his kindness, his ability as a speaker and the simplicity and clarity of his written opinions.

Williamson’s great-grandfather was Maine Senate President Joseph Williamson, younger brother of Maine’s second governor, William D. Williamson (1821), and his grandfather was Edwin C. Burleigh, who was Maine’s governor from 1889 to 1893.

According to Bill Caldwell’s combination obituary and tribute in the Jan. 2, 1977, Portland Sunday Telegram (reprinted in the Congressional Record at the request of then-Senator Edmund Muskie), Williamson was the fourth of five generations of lawyers.

Born in Augusta, Williamson attended Cony High School and graduated from Phillips Andover Academy. Two sources say he served in World War I, his Dec. 28, 1976, obituary in The New York Times specifying that he was a lieutenant of infantry; neither source gives dates. He earned a bachelor’s degree from Harvard, where he edited The Harvard Crimson, in 1920 and a doctorate of law (J.D.) from Harvard Law School in 1923.

On June 2, 1925, he married Grace Warren Whitney, a graduate of Cony High School and Wellesley College. Their son, Robert B. Williamson, was a lawyer in Cape Elizabeth in 1976.

Caldwell quoted an earlier newspaper report that Williamson began practicing law in Augusta in partnership with Lewis Burleigh; his father and Lewis Burleigh’s father had been partners in the earlier Williamson and Burleigh firm. He also wrote for the Kennebec Journal at some point. His first public position was as U. S. Commissioner for Kennebec County, in 1926. He resigned from that job in December 1928, after being elected to his only term in the Maine House of Representatives.

On Aug. 15, 1945, Governor Horace A. Hildreth made Williamson a Maine Superior Court justice. Governor Frederick Payne appointed him a Supreme Court associate justice on April 28, 1949; on Oct. 4, 1956, Governor Muskie made him Chief Justice. Seven years later Governor John Reed reappointed him for a second term. Williamson retired from the court on Aug. 21, 1970.

The New York Times obituary said that in 1967-68 Williamson served as head of the national Conference of Chief Justices (CCJ), created in 1949 to let states’ top judicial officers discuss common problems. (As of January 2016, Wikipedia says, the CCJ included all 50 states, the District of Columbia and the five United States territories [American Samoa, Guam, the Northern Marianas Islands, Puerto Rico and the U. S. Virgin Islands.])

Caldwell, quoting employees at the state Law Library and others who knew Williamson personally, called him gentle, quiet, modest, compassionate, courteous and well-liked. And, Caldwell wrote, he was in his quiet way a rebel who made many improvements to the Maine court system during his two terms as Chief Justice. In granting him an honorary doctorate, Bowdoin College credited him with updating the Maine Rules of Civil Procedure, the document that describes procedures for state district and superior courts in civil cases.

The Bowdoin citation also praised his service as president of the Maine Congregational Conference and said that B’nai B’rith had praised him for exemplifying brotherhood.

After Williamson’s retirement from the Court, an on-line source says he was a teacher for a year, and then-Senator Muskie’s tribute in the United States Senate said he served on state and national committees. Williamson died Dec. 27, 1976, four days after being admitted to the coronary care unit at Augusta General Hospital. 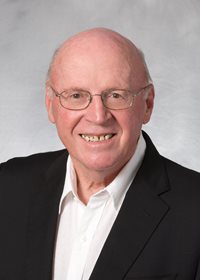 In an interview with a Maine law school representative (unnamed) available on line, Wathen credited the law school with providing his life’s direction. In his youth, he confessed, he left college more than once before he got married in his junior year (to Judith C. Foren, also of Easton) and settled down, becoming a dean’s list scholar.

Admitted to the Maine bar in 1965, Wathen was a member of the law firm of Wathen and Wathen, in Augusta. The first Wathen was his brother George; after George’s untimely death in 1971, Wathen became head of the firm.

In September 1977, Governor James Longley abruptly appointed him a Maine Superior Court justice. Governor Joseph Brennan named him to the Supreme Court on Aug. 31, 1981, and on March 20, 1992, Governor John R. McKernan Jr. made him Chief Justice. Wathen told the law school interviewer he had enjoyed everything he worked at – except “picking potatoes and shoveling manure” – but found the position of Chief Justice “the best job by far,” providing interesting cases, a mandate to decide them the right way and authority to carry out the mandate.

Reappointed in 1999 by Governor Angus King, he resigned Oct. 4, 2001, for a brief candidacy for governor in the Republican primary. The experience showed him that he did not enjoy being part of the political process, and he quit after seven weeks.

He then joined the Augusta law firm Pierce Atwood, which became the successor to Wathen and Wathen in 1977 when Wathen became a Superior Court Justice. The Pierce Atwood website lists him as Of Counsel, specializing in arbitration and mediation and dealing with issues nation-wide and in Puerto Rico. The website has a long list of types of issue in which he uses his expertise, most of them business-oriented.

On June 8, 2011, Governor Paul LePage appointed Wathen chairman of the board of the Maine Turnpike Authority. He was reappointed in 2019; his term ends March 31, 2024. He serves on several other state and national boards overseeing legal and educational programs.

Other on-line sources (see, for example, the list of winners of the Access to Justice Award on the Muskie Fund for Legal Services home page) describe his roles in mental health and domestic violence issues, improving access to legal services for poor people and charitable and educational activities.

Wathen, like Senator Angus King, rides a Harley-Davidson motorcycle (known affectionately as a hog). Several Maine newspapers, including the Lewiston Sun Journal (Aug. 21, 2017) and the Ellsworth American (Aug. 15, 2018), have run stories about the two and their companions touring the state. According to the interview mentioned above, Wathen is a fan of Robert Pirsig’s book Zen and the Art of Motorcycle Maintenance.

Waterville’s Light Up the Town winners announced AARP OUTREACH: Greetings from your friends at AARP Maine
Scroll to top