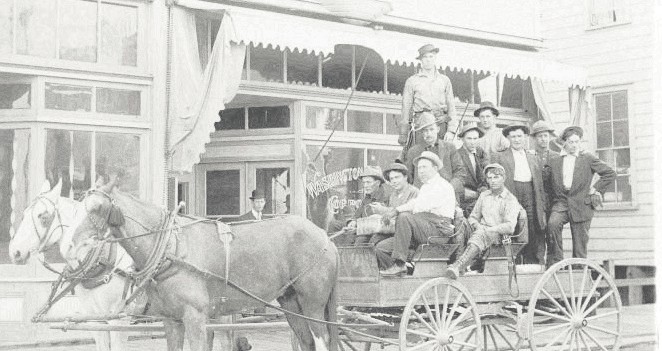 Early public transportation in the central Kennebec River valley came in three forms: the ferries and other riverboats previously mentioned (see The Town Line, April 23 and April 30, and for China Lake, June 4); stagecoaches; and railways.

On land, horses and oxen were the earliest movers, for people and goods, individually and corporately. Ruby Crosby Wiggin’s history of Albion includes a photo of what she labeled the town’s first school bus, horse-drawn. The photo is undated, but the bus and a group of students are standing in front of the Besse building, which was built in 1913 as a high school and now houses the town office.

(In addition to horse- and ox-power, Kingsbury, in his Kennebec County history, added rum power: he wrote that the military road between Fort Western, in Augusta, and Fort Halifax, in Winslow, opened in 1754, could be used in winter only by soldiers hauling supplies on sleds, and an officer reported needing quantities of rum to keep the men going.)

Stagecoaches made their first appearance around 1800, Kingsbury wrote. By 1806 a coach was making two trips a week between Brunswick and Augusta.

Extension farther inland came soon afterward, as roads improved. Dean Marriner wrote in Kennebec Yesterdays that by 1827 two of Maine’s five principal roads went along part of the Kennebec, the road from Portland to Bangor and the road from Augusta to Anson.

Kingsbury described a weekly route from Augusta to Bangor that started in 1812 and by the 1840s was a major link, carrying passengers and mail. The coach left Augusta at 7 a.m. and reached Bangor in about 12 hours; the next day, the driver left Bangor at 7 a.m. and reversed the route.

A January 30, 1826, advertisement found on line offers the following description of a Hallowell, Augusta and Bangor mail stage.

Every Thursday, the coach left Hallowell at 3 a.m. and reached Bangor at 6 p.m., via Augusta, Vassalboro (then spelled Vassalborough), China, Albion, Unity, Joy, Dixmont, Newburg and Hampden. On Friday, it left Bangor at 3 a.m. and went south only to Augusta, arriving at 6 p.m.

Every Sunday and Tuesday, the run was from Augusta, starting at 3 a.m., to Bangor. Monday’s return was only to Augusta, Wednesday’s to Hallowell. Despite the longer trip to Hallowell, the times were constant, 3 a.m. to 6 p.m.

(This advertisement has the names Burley and Arnold at the bottom, identified as the “proprietors” of the business. Kingsbury, in his chapter on Albion, wrote that partners Burleigh and Arnold started the Augusta to Bangor run in 1820, and added that the Burleigh involved was the grandfather of Maine’s 42nd governor, Edwin C. Burleigh, who served from 1889 to 1893. A web search for “Burley” in Maine turned up only Burleigh references.)

As the coach headed for Bangor, horses were changed frequently, including in Vassalboro (Marriner lists the Revere House, still standing at the four corners in East Vassalboro, as a stage stop in the mid-1800s), China and Unity. Kingsbury wrote 17 horses were kept in Vassalboro. In China Village, there were usually 15 to 18 horses, according to the China bicentennial history. The same book lists a stop called Stage Tavern between East Vassalboro and China Village by 1830, its exact location unknown.

In China Village, General Alfred Marshall and his successors in the business hosted many travelers in the hotel on the northeast corner of the Main Street-Neck Road-Causeway Road intersection between June 1827 and 1864. The building was used intermittently as a hotel until 1946, and is now a private home.

Kingsbury referred to the stagecoach stopping at an Albion tavern. Wiggin repeated the story that John Wellington opened a hotel at Albion Corner soon after the route to Bangor began running through Albion in 1820.

(The first Wellington Inn burned in 1860. Charles Wellington, John’s son, built another, to which he added a store and post office. The Albion history has a photo of the second Wellington Inn, a handsome three-story Federal building with an open porch along the ell. It burned down in 1898.) 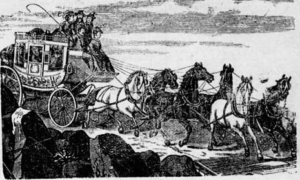 The stagecoach driver usually had either four or six horses in front of him, and Kingsbury wrote that men capable of handling six horses and staying on schedule were much admired. Drivers were also repairmen; they provided first aid to horses and when necessary passengers; perhaps most important, they carried the latest news from stop to stop.

At first the Augusta-Bangor line used old-fashioned thoroughbrace coaches, with the body suspended on leather straps or thoroughbraces. Soon, Kingsbury wrote, the more comfortable Concord coach, invented in Concord, New Hampshire, became standard. Wikipedia explains that the Concord coach had a longer suspension system that better cushioned the ride and lessened stress on the coach body.

Wiggin described two stagecoach routes through the southern part of Albion, one without dates, one late in the 19th century. (As mentioned in the Albion history in the June 11 issue of The Town Line, Wiggin and Kingsbury both found confusing references to “South Albion,” which seemed to be two or three different places at different times.)

The undated stagecoach route was an Augusta to Bangor run that went through an especially deep muddy hollow. Depending on weather and road conditions, the stage driver would use four or six horses. When he had six, he could not easily reach the lead team with his whip. A local boy was kept on watch: when the coachman blew his horn as he approached the mudhole, the boy would run to the roadside and flick his whip to encourage the lead horses, while the driver handled the others.

The second stage route Wiggin described was actually either an express wagon or a buckboard route. (Wikipedia says the buckboard is an American invention, a cart designed for passengers as well as goods. Suspension is in the form of flexible floorboards plus a leaf spring underneath the seat.) It ran from Puddle Dock in southern Albion to Fairfield in the mid-1890s, with Martin Witham the driver.

Witham made two trips a day, six days a week, with one or two horses as conditions dictated. Wiggin’s history says his route went through Albion Corner, East Benton, Benton Falls (earlier in the 19th century the Falls had a hotel called the Reed House, Marriner wrote), Benton and Benton Station to Fairfield. Marriner added that even on this short route, Witham would change horses in bad weather.

The stage carried mail and passengers. Wiggin reported an (undated) letter from southern Albion residents to the U. S. Postmaster General asking him to restore the twice-daily runs, which had been reduced to once a day. She did not know whether the request was granted.

While Witham waited in Fairfield he would buy groceries and other items requested by people along the route. Marriner says this courtesy was common among stage drivers. Since they hadn’t time to stop to pick up a list, roadside residents would shout out their needs and the drivers would remember what to get and where to deliver it.

In the 1840s another stagecoach line operated briefly between Vassalboro and Newport, running through Benton, according to Kingsbury. Also, he wrote, from about 1841 until 1849 a one-horse cart functioned as a stage from Waterville through Benton and Unity to Bangor. After the railroad reached Waterville in 1849 (Kingsbury’s date), a larger coach drawn by four horses made the trip the rest of the way to Bangor, until the railroad was extended and supplanted it.

Farther north along the Kennebec, Kingsbury mentioned two stage routes that ran through Clinton. One, established about 1830, went from Waterville to Canaan. In its early years it crossed the Kennebec at Noble’s Ferry; later the route continued another two miles along the west shore to Pishon’s Ferry. In Canaan this route and the route from Skowhegan to Bangor met.

The second stagecoach through Clinton, Kingsbury wrote, was an Augusta to Bangor run that was started about 1850 and went through Waterville and Clinton. He listed three drivers’ names, but unfortunately provided no information about ownership or relationship to the earlier companies connecting the Kennebec Valley to Bangor.

Marriner’s history lists multiple stage lines running from Waterville. In his order, they were:

In the history of Fairfield there is a passing reference to a stage stop at Nye’s Corner, which was a good-sized village until the 1840s. It had a church, stores and various small manufactories (making hats, coats, shoes, carriages, barrels and the like) and a hotel. The hotel included the post office and stables for stage horses, to rest and feed them on the trip from Waterville to Skowhegan. The writer added that the drivers, too, probably appreciated a chance for a break and perhaps a drink.

Stagecoaches from Augusta went not only upriver toward Waterville and on to Bangor, but east to Belfast and other parts of the coast and northwest toward Farmington.

South China, where there were several taverns along what is now Route 3 and at least one hotel in the village for much of the 19th century, was on the stage route from Augusta to Belfast.

Milton Dowe’s 1954 history of Palermo describes the stagecoaches that ran through that town, without giving dates or routes. They carried passengers and mail, Dowe wrote; the driver sat up high with baggage and mail behind him. From two to six horses were used, and because the stagecoaches were big and heavy, there were frequent stops at roadside taverns to change horses.

Millard Howard’s later (2015) history mentions stagecoaches between North Palermo and Montville. After the Sheepscot was bridged in 1826 about where Route 3 now runs, Arnold and Whittier opened an Augusta-to-Belfast route that carried mail and passengers.

Howard found its advertisement: the stage left Augusta at 8 a.m. Fridays and Sundays and “Eastman’s” at an unspecified time Wednesdays and reached Belfast the same day. Passengers coming west from Belfast “will have conveyance” from Palermo to China.

(Eastman’s was probably Thomas Eastman’s tavern and inn, which was probably near the east boundary of Palermo. The main road was at first called the Eastman Road. According to Howard and an on-line genealogy that almost certainly describes the same man, Eastman (1771-1840) was one of Palermo’s representatives to Maine’s 1820 constitutional convention, a legislator and an Associate Justice of the Waldo County Court of Sessions.)

The history of Windsor does not include transportation. Mentions of taverns and hotels in South Windsor and at Windsor Corner suggest stagecoaches might have run east from Augusta on what are now Route 17 in the southern part of town and Route 105 in the north.

Alice Hammond wrote in the history of Sidney that by 1827, a Maine almanac listed five designated stagecoach routes in the state, including one linking Augusta with Anson that went through Sidney and Fairfield.

Kingsbury added another stagecoach line between Augusta and Farmington that went through West Sidney and made the settlement there the largest commercial center in town up to 1892, when his Kennebec County history was published. The village had several stores and taverns, two blacksmiths and a cooper, he wrote, and farmers shopped there not only from the west side of Sidney but from adjoining parts of Augusta, Belgrade and Readfield.

Next: If you sought a (somewhat) smoother ride than the stagecoach provided, by the mid-19th century there were trains, and by the early 20th century trolleys and street railways.