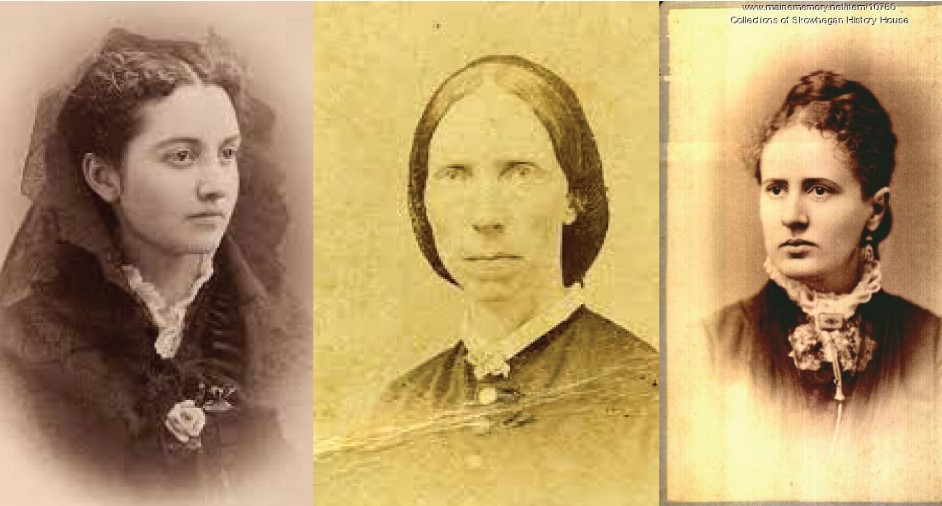 Readers of recent articles in this series on the history of central Kennebec Valley towns will have noticed differences between education for men and education for women from the late 1700s into the 20th century.

The primary schools, for the most part, taught boys and girls similarly. After about eighth grade, boys were more likely to continue their education, and to have more varied opportunities.

These articles have named several women who aspired to open schools of their own, or actually did so, but there has been little or no follow-up information in written histories or on line. Most high-school founders, principals and teachers who left records of achievement were men.

One exception to this generalization was Daniel Cony’s Female Academy in Augusta (1816-1857). The academy had a woman as its first principal; its students included boys as well as girls (see The Town Line, Sept. 2, 2021).

The Augusta Classical School had several women as teachers in the 1830s (see The Town Line, Sept. 9, 2021). And, as mentioned last week, Naomi Bunker ran a seminary in Fairfield in the mid-nineteenth century.

In high schools reviewed in previous articles, boys out-numbered girls most of the time. Nineteenth-century high-school boys were being prepared for college or careers; high-school girls were getting “an elevated course of female education” (Vassalboro Academy, 1856).

Hallowell Classical Academy offered three separate courses in 1876. The first provided preparation for college. The second was “especially for young ladies” and promised more education than the public schools provided. The third was a shorter course for both boys and girls.

Despite fewer educational opportunities, some women from the central Kennebec Valley “made good” in different ways, with or without education. They included Martha Ballard (Hallowell), Amy Morris Bradley (Vassalboro) and Mary Caffrey (Low) Carver (Waterville).

The best-known to Maine readers, and therefore the one who will receive the least attention here, was Martha Ballard (1735-1812), who moved from Massachusetts to Hallowell in 1777 and has become famous since Laurel Thatcher Ulrich published A Midwife’s Tale: the Life of Martha Ballard based on her diary, 1785-1812 in 1990.

Ballard was a successful midwife, as well as a diarist whose writings described daily life in the Kennebec Valley between the Revolutionary War and the War of 1812. In an article published on line by the University of Houston College of Engineering, John Lienhard wrote, “Martha was literate but not educated. Her spelling was – well – highly creative.”

In Bernhardt and Schad’s Anthology of Vassalboro Tales, Simone Antworth of East Vassalboro wrote that her late husband, Howard, was an indirect descendant of Martha and Ephraim Ballard. According to her research, Howard’s mother’s mother, Nellie Martha (Coombs) Earle (1887-1976), was the daughter of Archie Coombs and Elvira Goddard Ballard. Elvira Ballard was the great-great-granddaughter of Ephraim Ballard’s brother Jonathan and his wife Hannah (Kidder) Ballard.

Simone Antworth added that Nellie Earle “was a pillar in the Vassalboro community,” active in the Grange, the Methodist Church and other groups and “always ready to help anyone.”

Nellie’s younger brother, Roy Coombs (1889-1985) lived in China, where in 1933 he and George Wayland Jones started the Jones and Coombs Bean Cleaning Plant in China Village. Roy and his wife Mabel (Ward) Coombs (1888-1978) were parents of Hazel Ward Coombs (1913-2001), remembered as the assistant librarian at the Albert Church Brown Memorial Library in the village.

An earlier Vassalboro resident, Amy Morris Bradley (1823-1904), earned a national reputation for her service during and after the Civil War. She was a teacher, a nurse and an advocate for soldiers and children.

Born in East Vasssalboro, youngest of eight children, Bradley lost her mother when she was six and was raised by her father and siblings. Esther Bernhardt wrote in the Vasssalboro anthology that Bradley started teaching when she was 15 (Wikipedia says two years later) and saved her money to enter Vassalboro Academy.

The Academy qualified her for a teaching principalship in Gardiner in 1844. By 1846, Wikipedia says, she was teaching in Massachusetts.

Pneumonia compelled her to move south in 1849. When neither South Carolina nor a return to Maine restored her health, in 1853 she went to San Jose, capital of Costa Rica, where she taught herself Spanish and, Wikipedia says, “established the first English school in Central America.”

After a brief stay in East Vassalboro in 1857 and 1858, Bradley took a job in Massachusetts translating letters for the New England Glass Company. From there, in August 1861, she volunteered as an army nurse, beginning her service Sept. 1 in the Third Maine Regiment’s hospital near Alexandria, Virginia.

Bradley held important nursing positions throughout the war, including, Bernhardt said, as superintendent on the Ocean Queen, the ship that brought wounded soldiers from battlefields to Washington, D. C., hospitals. In Washington, she helped “establish a home for discharged soldiers” and helped many of them collect their back pay.

An on-line women’s history points out the low regard for female nurses in the 1860s, referring to drunken surgeons and contemptuous generals. The author credits Bradley, as a Special Relief Agent for the United States Sanitary Commission, with transforming dirty, unsanitary, poorly supplied army medical facilities into “clean, efficiently-run hospitals.”

In 1866, the Boston-based Unitarian philanthropy called the Soldiers’ Memorial Society asked Bradley to carry out its mission of establishing free schools for poor white children in Wilmington, North Carolina. Her first school opened in January 1867, in a building that had housed a similar school before the war, with three students. By 1869 she was in charge of three separate schools with 435 students.

Alma Pierce Robbins wrote in her Vassalboro history that Bradley’s niece, Amy Morris Bradley Homans (1848-1943) was a teacher in North Carolina and an early promoter of physical education for women. Her work led to the 1909 creation of Wellesley College’s Department of Hygiene and Physical Education, Robbins said.

Waterville native Mary Caffrey Low Carver (1850-1926) was still Mary Low when she entered Colby College in 1871. In July 1875 she became the first woman to graduate from Colby, and one of the first women in New England to earn a bachelor’s degree.

Low was class valedictorian. One on-line source says she gave the valedictory address at graduation. Wikipedia says she did not, because that role was traditionally for a man; but she did offer the prayer, in Latin.

Soon after graduation, Low married fellow Colby graduate Leonard D. Carver, who became Maine State Librarian. After teaching for a few years, his wife also became a librarian and worked as a cataloger for the state library. Wikipedia says she started the library’s card catalog.

Low continued to support Sigma Kappa and women’s education at Colby for the rest of her life. She spent her last years in Cambridge, Massachusetts, with her daughter, Ruby (Carver) Emerson.

Colby gave Low an honorary doctorate in 1916 and named a building after her. Mary Low Hall is a residence hall on the Mayflower Hill campus; a Colby website says it houses the Mary Low Coffee House, “a venue for concerts, international coffee hours, and informal gatherings.”

The second woman to graduate from Colby was Louise Helen Coburn (1856-1949) of Skowhegan, daughter of Stephen Coburn, Colby ’39. She graduated in 1877 and for the rest of her life helped promote women’s education at the college; she and Mary Low Carver led the unsuccessful protest against the 1890 division into men’s and women’s colleges.

A botanist, Coburn edited Maine Naturalist and was president of the Josselyn Botanical Society. She published a book of her poetry titled Kennebec and Other Poems (1916) and a two-volume history, Skowhegan on the Kennebec (1941). The Skowhegan History House Museum and Research Center is her legacy to her home town.

(Maine Naturalist was published in the 1920s in Thomaston. Its subtitle was Journal of the Knox Academy of Arts and Sciences on the Fauna, Flora and Geology of Maine.)

Frances Mann (1853-1935) was from Yarmouth and had taught high school in Rockport, Massachusetts, before coming to Colby. She met her husband, George Washington Hall, in college; she left Colby after her junior year because of health problems, and she and her husband both had careers as teachers, at least part of their lives in Washington, D.C.

When Albion native Ida May “Mabel” Fuller (1854-1930) decided to enter Colby, still primarily a men’s college, her older brother, David Blin Fuller (1853-1915) was reportedly so angry that he refused to follow the Colby family tradition and went to Bowdoin instead. His sister left college in her junior year and moved to Kansas, where she married a Dr. Pierce and after his death, Wikipedia reports, “became a successful businesswoman, founded a hotel for girls in Kansas City, and was vice-president of a bank.”

Elizabeth Hoag (1857-1875), who designed the Sigma Kappa emblem, died of tuberculosis in her graduation year, at the age of 18. Like her four friends, she was from Maine; this writer has been unable to find which town in Maine.

Adeline Weymouth (1817-1896), of Clinton, has a weaker, and more unusual, claim to notice than the women previously described.

Readers familiar with Henry Kingsbury’s History of Kennebec County, to which this writer often refers, know that the chapter on each town or city ends with a list of “personal paragraphs.” For the 10 Kennebec County municipalities on which this series has focused (Fairfield is in Somerset County, Palermo is in Waldo County), Kingsbury listed almost 600 names.

Some were nationally known people like James G. Blaine, of Augusta, who got eight pages. Others were local farmers or merchants whose single paragraphs totaled about eight lines. Kingsbury did not say how they were chosen; this writer wonders if subscribing to buy a copy of the book was a factor.

Of the almost 600 names from 10 towns and cities, only one was a woman, Mrs. Adeline (Goodwin) Weymouth. Kingsbury gave her a long paragraph, about a third of a page, mostly about her husband and children.

Kingsbury wrote that the Weymouths had seven sons and three daughters, although he refers to them as “His [Sergeant’s] children.” Four of the six oldest boys, Jacob, John, Alonzo and Warren, born between 1835 and 1846, joined the army in 1861 and after their three years were up re-enlisted for another three years.

The youngest of the three Weymouth daughters, Addie Justina (Kingsbury called her Justana), was born Sept. 22, 1857. When Kingsbury finished his book in 1892, Sergeant Weymouth had been dead for two years and Adeline and Addie were living “on the old homestead, where they settled in 1863,…carrying on the farm.”