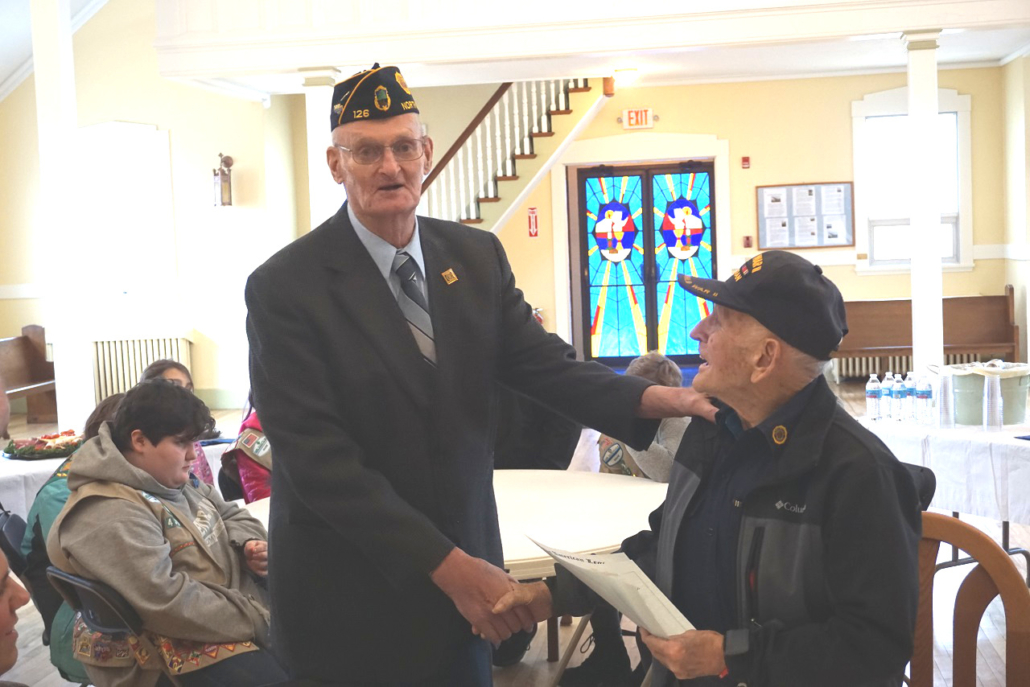 The fire at Notre-Dame Cathedral, in France, was still burning on Monday evening, April 15, as a small group gathered at St. Bridget’s Community Center, in Vassalboro, to celebrate the service of the soldiers who had freed that country from Nazi occupation 75 years earlier. 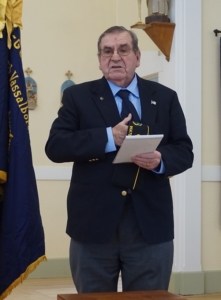 The devastation unfolding in Paris was clearly on the minds of everyone, as Pearley Lachance, American Legion chaplain for Bourque-Lanigan American Legion Post 5, in Waterville, opened the ceremony in prayer. “We are witnessing, via television, the destruction by fire of Notre-Dame, in Paris,” the chaplain intoned solemnly. “Paris was liberated by our brave troops in 1944. Many of them came home with memories of having visited this holy site. To the remaining veterans of that great war, we are grateful, and pray that God protects them until their final hour. Amen.”

Later, Jim Kilbride, Adjutant for Vassalboro American Legion Post 126, explained the impetus for holding this celebration honoring local World War II veterans. “We were having meetings,” he said, “and realized that for a lot of our older veterans, it was getting harder for them to come to the meetings. We decided we needed to do something before they were all gone. When we originally started researching it, we thought we had seven [veterans of World War II], only to find out that two had passed away recently.”

Although the Legion eventually identified five Vassalboro World War II veterans still living, three of those men, James W. Gray (US Army), Roland Lapointe (US Army), and Robert Roux (US Navy), could not make it to the ceremony for health reasons. Earl Brown (US Army) and Willard Sleamaker (US Navy) were in attendance, however. 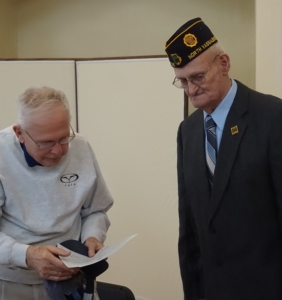 Willard Sleamaker was only 17 when he joined the Navy, and was stationed on an island repair station in the Philippines during the war. “We maintained a little island that became the ship repair center for the Pacific,” he explained. “My job as a kid was to operate equipment, grease it and keep it maintained.”

Earl Brown was drafted into the Army right out of high school, shortly after the Japanese attack on Pearl Harbor, and served as a field medic in the 79th division. He remembers participating in the liberation of Paris in August 1944, and visiting Notre-Dame Cathedral after the fighting ended. “That’s why I’ve been watching all day,” referring to the fire still burning in the Gothic church.

(Earl can usually be found at Bee’s Snack Bar, in Winslow, around 10 a.m. each morning, so be sure to drop by to say hello and thank him for his service.)

Richard Bradstreet, Vassalboro resident and state representative for District 80, also spoke briefly at the ceremony. “It’s an honor and a privilege to be here,” he said. “We honor our people who served their country.” Then, referring to Tom Brokaw’s 2004 book, The Greatest Generation, which he had recently finished reading, he said, “It was really eye-opening to me what the Greatest Generation went through in service to our country. I appreciate all the work that you’ve done, and appreciate our World War II veterans especially. They are part of the Greatest Generation, and I’m gratified to be here. Thank you.” 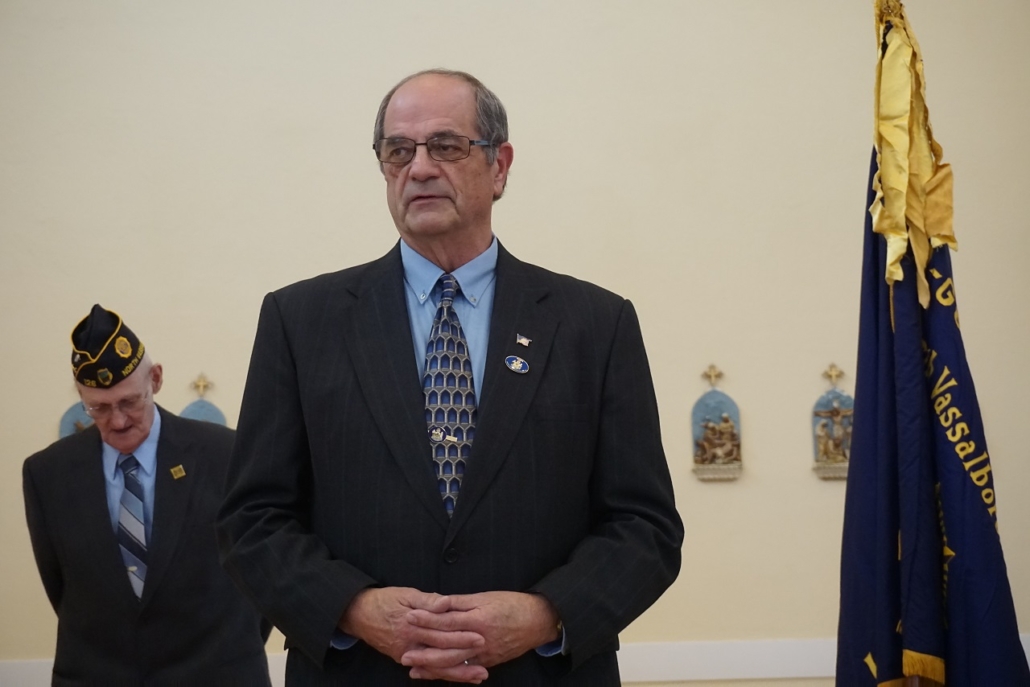 Perhaps the most poignant moment of the evening came when Post 126 Adjutant Jim Kilbride read a certificate originally sent by the State of Maine to the families of soldiers killed in World War I. “In 1920, the State of Maine sent this certificate to the families of those that passed away during World War I,” he told the audience. “I have never seen a statement that better covers what it means to serve your country.” He then read from the century-old document: “’War means sacrifice. Every man or woman who enters the service lays at the feet of his country his hopes, his ambition, and his life. This is fully understood and yet it lessens not but little the sense of loss when that supreme sacrifice is made.’” After a pause, he looked up at the audience again, his eyes tight with emotion. “That is what it means to serve your country — to put your life, your hopes, your ambitions, your dreams on the line for your country,” he said, and then asked for a moment of silence, “for the men and women who have passed away in war, combat or in active service, and to remember those who are serving now.” 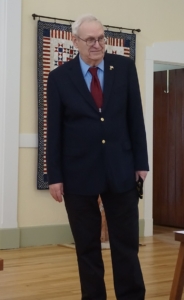 After the ceremony, Adjutant Jim Kilbride and Commander Tom Richards spoke about the current state of the American Legion. “We don’t have that many members,” Richards admitted sadly. Younger veterans aren’t joining the Legion as they have in the past, and he is worried the Legion won’t be around for the next generation.

Kilbride thinks the Legion is a victim of its own success. Because of the important work of the American Legion, the VFW and other organizations, veterans’ benefits, as well as the public perception of returning soldiers, has improved tremendously – a marked contrast to the days after the Vietnam War. But, he warns, those gains were only accomplished through strength of numbers. “What we try to get younger veterans to understand is, without their membership, we have a very hard time working with Congress and the Senate on veterans’ issues,” Kilbride said.

Waterville American Legion Post 5 chaplain, Pearley Lachance, who was recently named 2019 Legionnaire of the Year, is also doing his part to keep the memories of local veterans alive. For years he has collected the names of area veterans, particularly from the first two world wars. “What happened with this project,” he said, “it just got out of hand. I now have over 8,000 names of people from central Maine.” Lachance began compiling the list by poring through more than a thousand newspaper articles saved in an old scrapbook by a local teacher from the 1940s, which is now archived at the Waterville American Legion. Then, two or three years ago, he realized, “Those [names] are just words on a page.” He then began tracking down photos to go with every name. He’s gathered 400 pictures so far, 15 of which are from Vassalboro.

If you have a grandfather or grandmother who served in either world war, and a photo you’d be willing to share (he’ll scan it and get it back to you), you are encouraged to contact him at 873-0358 or through the American Legion Post 5, in Waterville.

The American Legion Post 129 meets every other month at St. Bridget’s Community Center, in Vassalboro.

FOR YOUR HEALTH: Health Benefits Of Plant-Based Nutrition Give Us Your Best Shot! Week of April 25, 2019
Scroll to top