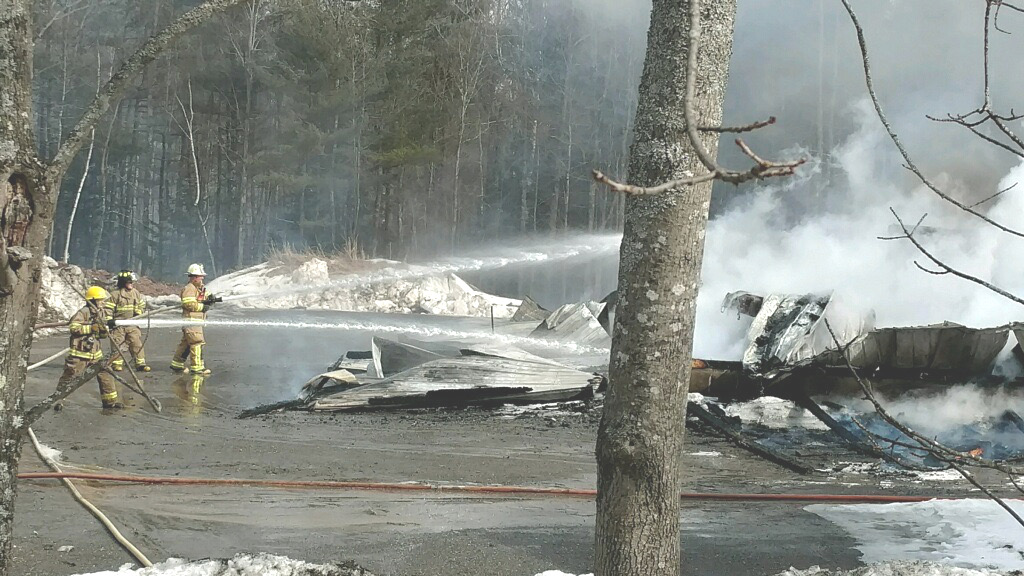 Firefighters putting out the remainder of a fire on Rte. 3. (photo courtesy of Kevin Luczko)

“Vassalboro… stand by for a call.”

While sitting at my desk, working at my day job designing an ad for a client, I heard a call for Vassalboro Fire Department come over my fire pager/scanner. “Structure fire off route three. Barn Fire, visible flames.”

A few minutes later, the call was repeated.

I live in China, so it wasn’t my company’s call, but a barn fire? Were there animals involved? I started to pace a bit. I wanted to head out and help. After all, I wasn’t in a dress. I wasn’t in the shower. I wasn’t at a meeting. I was at home and able to go to the fire scene.  Then it happened.

“China Fire…stand by a call.”

I saved my work and told my husband I would be going on the call. My equipment was already in the truck so I raced out the driveway. 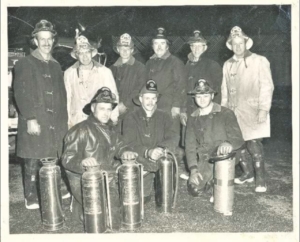 Being a first responder is in my blood. The Boyces (my maiden name) were Irish farmers that emigrated to the U.S. and landed in Philadelphia. My grandfather was a Philadelphia cop. My uncle Walt was the first certified EMT in New Jersey, and my father was a volunteer firefighter in our small home town of Ivyland, Pennsylvania, before he was diagnosed with Asbestosis (an illness related to his job as a pipe insulator in Philly.) I requested that the name on my fire turnout gear reflect my proud family history. ‘Boyce-Isaac’ is now on the back of my fire coat.

I sped towards the fire and pulled my truck aside for the China Village VFD Engine #34 as it headed down Lakeview Drive for Route 3. My red flashing strobe wasn’t working properly, but there was no time to fix it. I waited patiently for everyone to get out of my way. I parked, got into my turnout gear and dashed up the road to the fire scene.

The two-bay, oversized structure was already brought down by the fire and at this point, the fire companies were concerned with keeping the adjacent building safe and extinguishing the fire.

The first firefighter I saw on the scene was Kevin Luczko, my mechanic and a volunteer firefighter from Vassalboro. “Hey Kevin, how are you doing?” Kevin also left his job to help with the fire. He said, “I’m doing good, but I’ll be stuck here for a while. I drove the (fire) truck.” He pointed to where China Village Fire Chief Theriault was standing so I could check-in.

I received my Firefighter 1 certification in Bucks Country, Pennsylvania, and ran with the Midway Fire Company in Lahaska, Pennsylvania. After I moved to New Jersey in August 2001, I decided to join Hope Fire Company in Allentown, New Jersey, signing up the day after 9/11. During my time with Hope FD, became a certified EMT-B (basic). Once I moved to Maine, I knew I wanted to be active once again. This time, it was the conflicts within the town that inspired me. What better way to show your support then to volunteer your time, right?

Representatives from four companies had shown up at the scene: Vassalboro, Weeks Mills, China Village, South China. Chief Theriault greeted me by saying, “Get your gloves on and head over to see Ben.”

Ben Loubier is the assistant chief for China Village VFD, as well as a full-time firefighter for Winslow. Ben was located on (what was) the backside of the building. He was with a firefighter from another company and soaking a burned oil-tank and a charred mini-backhoe. “Grab the hose and back up (firefighter) Nivek (Boostedt),” he said. When you pull the handle on a fire hose nozzle, the force of the water pressure coming through the hose can set you off balance or even knock you over. Often times you will see two people manning a hose. The firefighter at the nozzle concentrates on the water and knocking down the fire. The second firefighter watches the first, as well as the overall surroundings, and where the hose is on the ground.

Nivek and I concentrated our efforts on the rear of the building. The walls had completely collapsed but were still smoldering. I could see what remained of a 250-gallon oil tank, a welding set up, a large older farm truck, a mini-backhoe, and a lot of bent and curled metal siding.  We were keeping water on the old farm truck and the oil tank. “Grab the hose and move toward the other side,” said Ben. “Concentrate on the backhoe.” We were often blinded by the wind blowing what appeared to be smoke, but in actuality, most of it was steam. The temperature was in the low 30s and between the heat of the burning wreckage and the cold water, we had a lot of white steam.

The mini-backhoe was still burning in its interior. We continued to drench it with water. Getting water to a fire is always an issue, so each department bringing a supply to the scene makes a difference. The ground was getting muddy from all the water and the warming sunshine. Firefighters wear Personal Protection Equipment (PPE), also called turnout gear. It is bulky and awkward and can weight over 25 pounds without additional equipment. Once it’s wet from spraying water and moisture in the air, it’s even heavier. It doesn’t take much for a firefighter to get tired, so Nivek and I switched positions and moved around the structure to get off the deepening mud.

The burned building was owned by Vannah Lawn Care. The business owner was on the scene and helped us move debris with a large excavator. This helped us out tremendously as it meant we didn’t have to dig and move material to make sure everything was extinguished.

Once the fire was officially declared out, we gathered up all of the mud-soaked hoses then drained and laid them back on their appropriate trucks. All the chiefs made sure their company’s gear was accounted for and we headed back to the station.

Once back, we signed the call log and talked about the fire. We were grateful to not have any hose to clean off. There was a lot of mud on the scene.

I laid my gear out to dry and repacked what I could. I was tired but like 90 percent of the other firefighters, I had to go back to work, but I did so with a smile on my face. Being part of the community means a lot to me. Helping my neighbors, contributing to the betterment of our area, and the camaraderie of the group are just a few reasons why I enjoy being a volunteer firefighter. So back to work and waiting for the next call to help. It’s only a question of when.