Three members of China’s Comprehensive Planning Committee, plus Kennebec Valley Council of Governments (KVCOG) representative Joel Greenwood and Planning Board Chairman Tom Miragliuolo, spent the last evening in July talking about the updated China Comprehensive Plan that Greenwood hopes to have drafted by the end of the year.

As a basis, there are the existing plan and a map designating areas proposed for development; a summary of results from the visioning session held earlier this year; and a summary of comments emailed in response to a questionnaire from the Tax Increment Financing Committee.

Greenwood emphasized that designating growth areas and drawing lines on maps is “not prescriptive, just idealistic” and is not intended to restrict development opportunities in town. Looking at where development has occurred since the current plan was approved, he and Miragliuolo agreed the plan had not been influential.

Any resident interested in joining the Comprehensive Planning Committee is welcome. More information is available at the town office. The next committee meeting is scheduled for 6 p.m. Wednesday, August 28, with housing and historic resources on Greenwood’s preliminary agenda.

The proposal to buy an excavator for China’s Public Works Department that has been on the selectmen’s agendas since June 10 is scheduled to appear again on August 19, under new management.

At the selectmen’s Aug. 5 meeting, board member Donna Mills-Stevens volunteered to renegotiate the proposed purchase with Chadwick- BaRoss, believing she can get better terms than Public Works Manager Shawn Reed did. Board Chairman Robert MacFarland expects her report in two weeks.

Reed hoped selectmen would approve the $172,850 price he had negotiated, including a trailer for the tracked Volvo machine and an extended warranty. He said Chadwick-BaRoss agreed to hold the price until Dec. 1, but not to guarantee the machine would not be sold to another customer while China officials debated (see The Town Line, July 25).

Mills-Stevens, a banker and co-operator of Stevens dairy farm, cited her experience in negotiating and in buying heavy equipment as she volunteered.

Selectmen rejected two other alternatives before letting Mills-Stevens take over. Ronald Breton’s motion to buy the excavator on the terms Reed presented received only Irene Belanger’s vote, with MacFarland, Breton and Jeffrey LaVerdiere opposed and Mills-Stevens unable to decide and recorded as abstaining. LaVerdiere’s motion to put the question on China’s November local ballot and let voters decide received his and Mills-Stevens’ votes, with the other three opposed.

After the final decision, Reed said he had “spent a lot of time and energy and effort on this,” trying “to do the best possible I could for the taxpayers.” His starting premise was that having a town-owned excavator instead of contracting for one would save money.

Now, he said, the selectmen could take over the project and he would focus on his other duties. Personally, he did not care what they decided; not owning an excavator would mean one less piece of equipment for which he was responsible.

On other public works topics, Reed reported most of the tools authorized to let new hire Josh Crommett do vehicle maintenance have arrived, and the work of removing beavers and their dams from the Bog Brook Road area continues.

The excavator discussion was interrupted by a parliamentary dispute. After Breton’s motion was made and seconded, Wayne Chadwick, the contractor whose excavator selectmen agreed to hire this year, asked to comment from the audience and MacFarland recognized him. Breton objected, saying by Robert’s Rules of Order audience members could participate in discussion until a motion was on the floor; then only board members could speak. Chadwick left the meeting.

When Breton returned to the topic before adjournment, Town Manager Dennis Heath said Breton was correct, and since the board adopted Robert’s Rules, members should follow them. However, he said, the rules are flexible: MacFarland could have asked the rest of the board to let Chadwick speak out of order.

Although the excavator will not – at least as of Aug. 5 – be on a Nov. 5 local ballot, selectmen accepted Heath’s recommendation that they ask voters another question: “Do they want to allow retail medical marijuana facilities in China?” The question Heath drafted asks if the current local ordinance prohibiting marijuana businesses should be amended to make an exception for medical marijuana businesses. (The single-page “Ordinance Prohibiting Retail Marijuana Establishments in China” is on the town website under “Ordinances, Policies and Orders.”)

China has one medical marijuana store, established before state law changed. Heath said it is grandfathered and would not be affected by a November vote. Under revised state laws China voters must “opt in,” that is, approve a local ordinance allowing such businesses, before any more can open. The planning board has one application on which it cannot act unless voters approve (see The Town Line, July 18).

Local elections will also be Nov. 5. Nomination papers are available at the town office for positions on the Board of Selectmen, Planning Board and Budget Committee and for one seat on the Regional School Unit #18 board.

Belanger and others commented on the success of the China Days celebration August 2, 3 and 4. Heath commended the police department, and audience member Tom Michaud praised town office staff member Kelly Grotton for her well-organized management of the event. 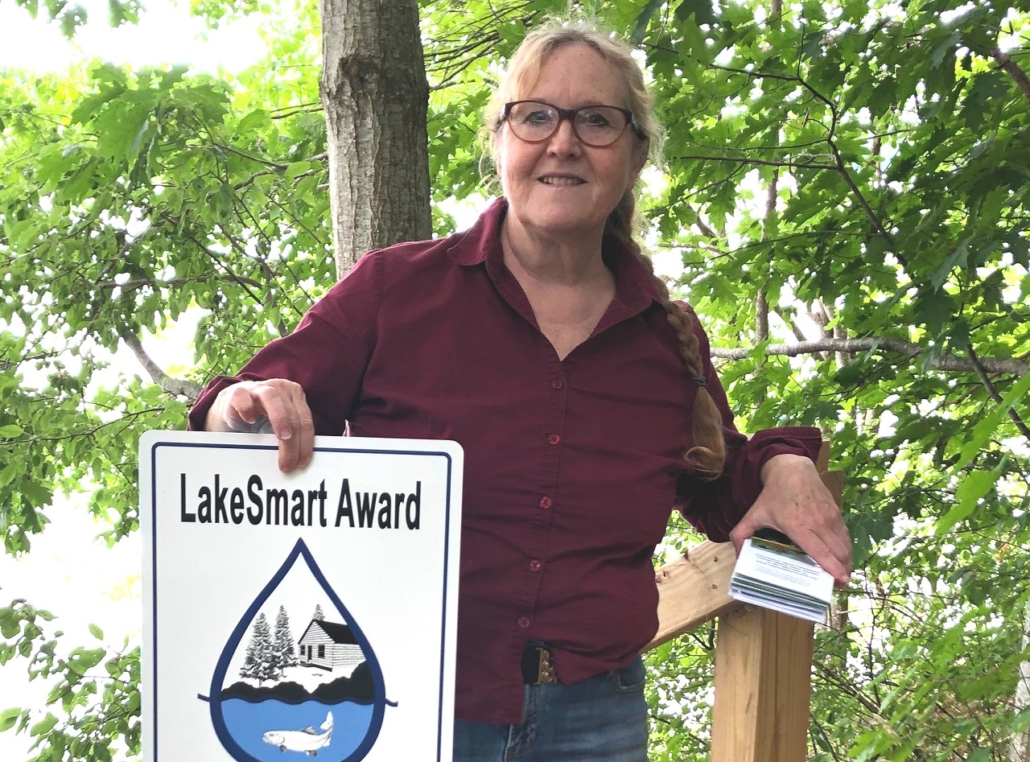 Jeanne Marquis and her 94-year-old father, Carl John Stenholm, were recipients of the LakeSmart Award for their lake property on Fire Road 1, on China Lake. Marquis says their Maine property has been in their family since the late 1800s when her great-grandfather, John Benson Doe, returned from sheep ranching out west to purchase their red brick home on the Neck Road. China Lake continued to call this family back home for three generations just as it did for John Doe, even if it was just for the summers. Two years ago, Marquis and her father made a permanent move to their China Lake home as their year-round residence.

Marquis told us, “I am very grateful for the work the LakeSmart Program and the China Lake Association does to improve the quality of the lake and monitor the loon population. It’s encouraging to see the loons and the eagles return to this area for the generations ahead of us to enjoy.”

If you would like to schedule a LakeSmart visit please contact Marie Michaud at 207-242-0240 or by email at ChinaLakeSmart@gmail.com. The visit only takes around an hour. We will share lake friendly ideas for your property. We can offer Youth Conservation assistance to get any suggested lake-friendly ideas completed, too. Together we can help protect China lake for now and for the future.

To submit a photo for this section, please visit our contact page or email us at townline@fairpoint.net! 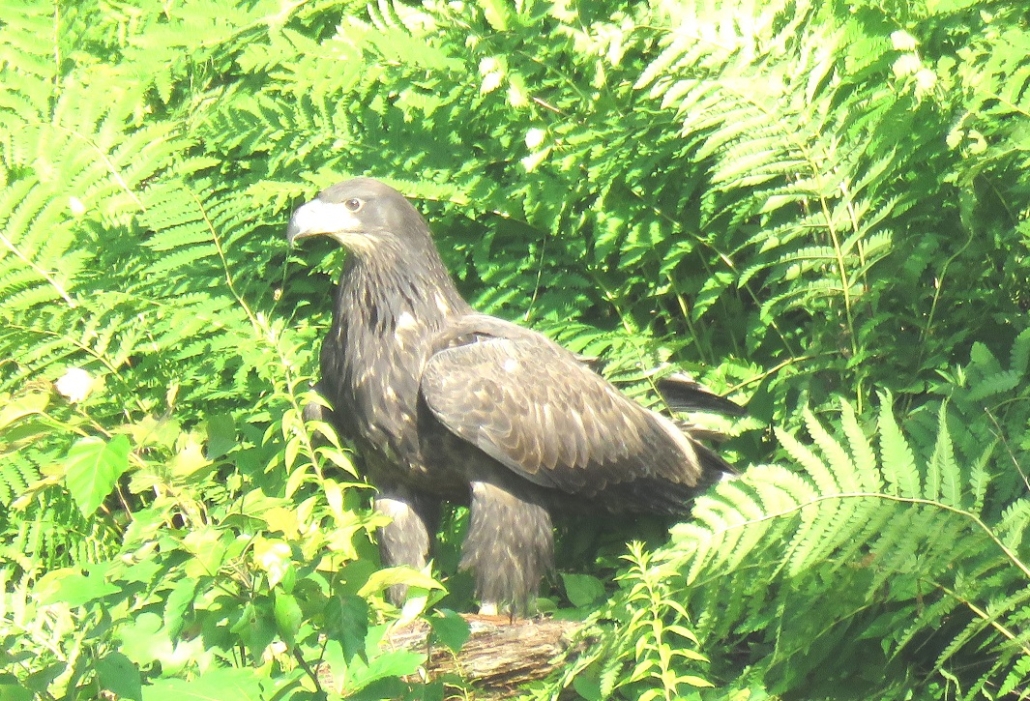 MOVING OUT: Tina Richard, of Clinton, caught this fledged eaglet on the ground near her favorite walking trail, in Winslow. 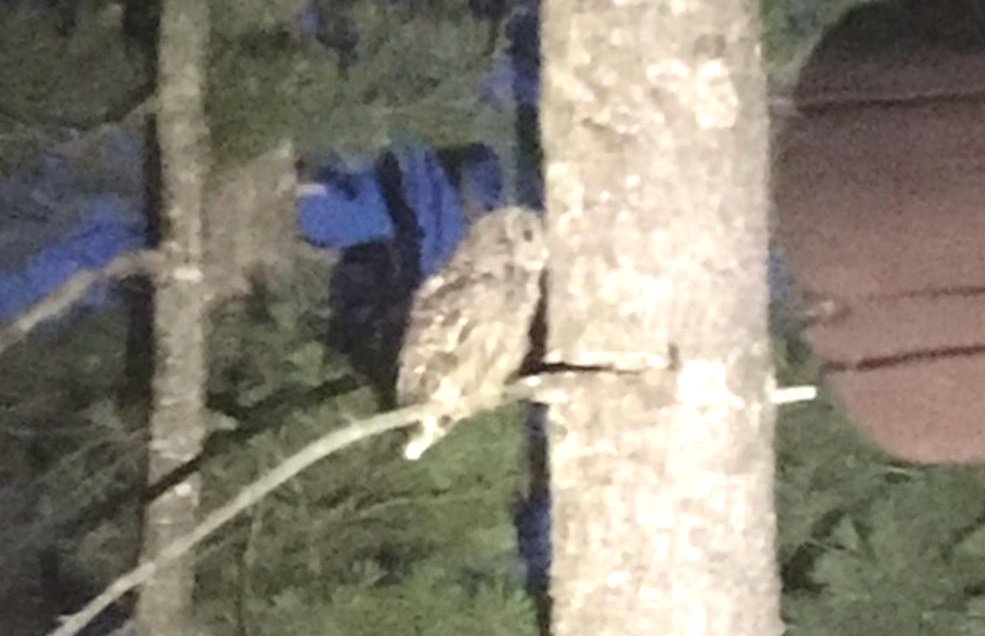 NIGHT OWL: Jean and Bill Roseman snapped this owl near a camp on Sheepscot Lake. 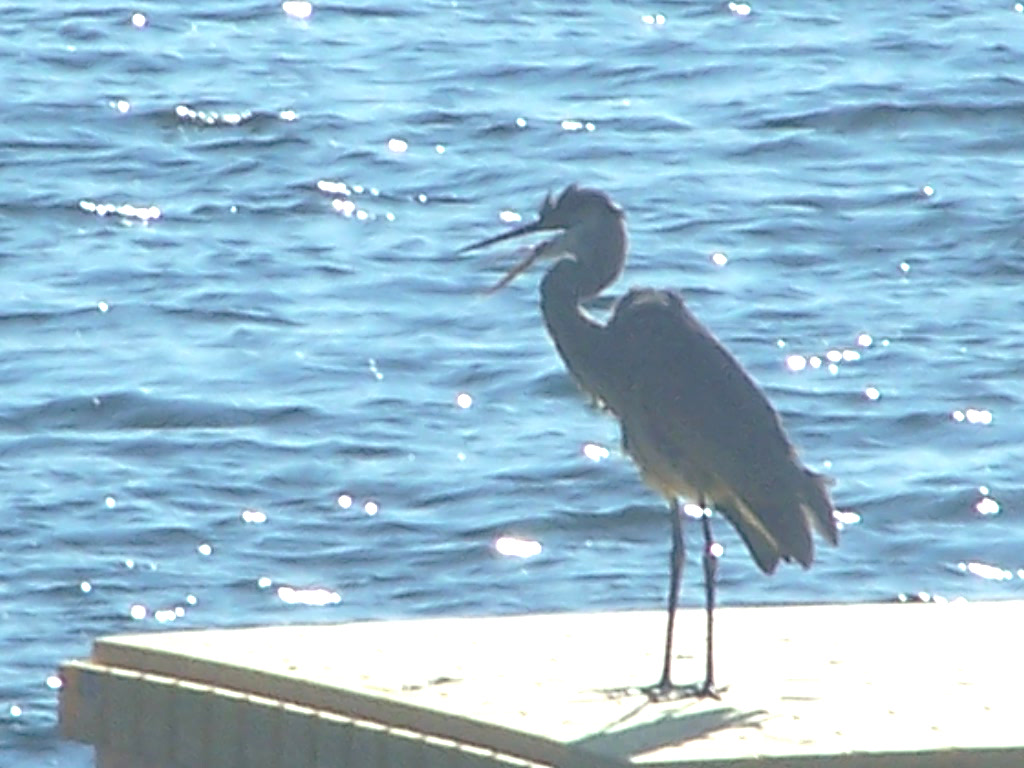 SIGHTSEEING: This blue heron was photographed by Michael Bilinsky, in China Village.

Dennis Heath, China town manager, has announced that following approval by the board of selectmen, the China Town Office will have new hours beginning November 1, 2019. 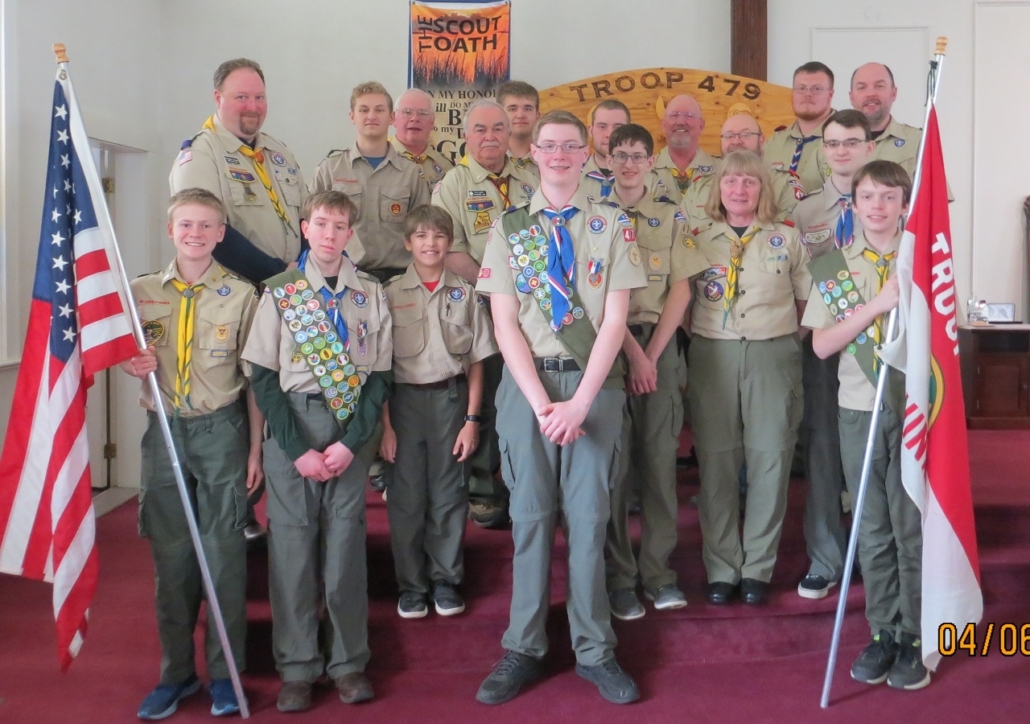 On Saturday, April 6, Troop #479 honored an Eagle Scout at a Court of Honor held at the China Baptist Church for Augusta resident Alex Stewart. Family, friends and Scouts attended the ceremony marking the advancement of this young man to the highest rank in Boy Scouts. 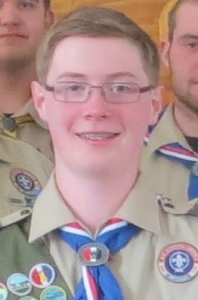 Alex joins a group of 40 Eagle Scouts from Troop #479 who have completed community service projects with the help of fellow Scouts and other volunteers throughout Kennebec Valley.  Each Eagle candidate must plan and supervise an Eagle service project to demonstrate his capacity and willingness to exert his leadership ability in activities that are constructive and worthwhile in his community.

Alex used his Eagle Project to give something back to his elementary school, Lincoln School. He collaborated with Jonathan Stonier, director of buildings and grounds for the Augusta School Department, to build a covered outdoor area in an underutilized space near the school. He received assistance from adult leaders and older Scouts as well as Custodian Brian Bolstridge the first two days of construction. He also received help from the younger Scouts on the third day to spruce up the grounds around the project with mulch, landscape rocks and several flower beds. He hopes the teachers and students will be able to use the structure as an outdoor learning station.

Alex is a graduate of Cony High School, in Augusta, and lives with his parents, Greg and Kristina Stewart, in Augusta. He was on the Cony golf team. This summer he is working at Shaw’s, in Augusta, and will be pursuing a degree in engineering at the University of Maine in the fall. 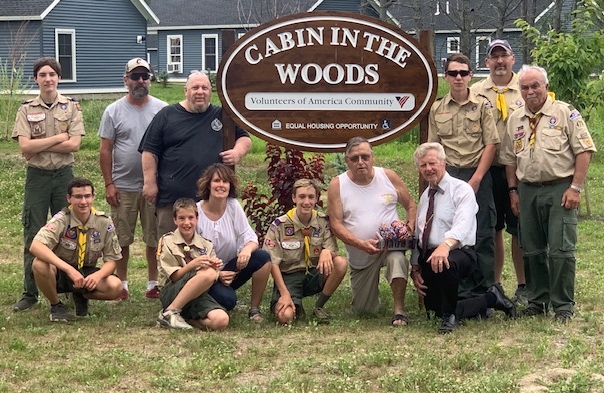 Rémy Pettengill’s Eagle Service Project was to make 50 Hygiene Care Packages for distribution to the Togus veterans. These Care Packages consisted of a handmade zippered bag filled with items donated or purchased such as toothpaste, a toothbrush, deodorant, denture adhesive, shampoo and conditioner, soap, razors, shaving cream, mouthwash, and nail clippers. Each bag was labeled for a man or woman and the items were listed on a tag attached to each bag to help with the packaging and distribution.

During the project, one evening was set aside for older scouts and leaders to cut out the material using a pattern for the hygiene bags. Another evening was for sorting out the donated toiletry supplies and filling the hygiene care packages. Rémy provided the leadership and instructions.

On Sunday, July 21, the Scouts and leaders were invited to assist the wheelchair veterans in getting to the church service. After the service, Togus invited the group to have lunch prior to delivering the hygiene bags to each veteran residing in the Cabins in the Woods. Rémy distributed the bags to the Scouts for delivery with help from Dan Hill, the Ma­sonic Service Asso­cia­tion Rep­resen­tative for Togus.

Rémy first got involved with the veterans by way of the Masons. He went to Togus with the Masons to push the wheelchair-bound veterans down to their church service. While talking to Hill he learned that some of the veterans were not provided with the basic necessities to keep them healthy. Rémy thought he could help provide the toiletries for the brave men and women who served our country. With this in mind, he started planning his Eagle Service Project.

Rémy, 13, is the son of Lee and Danielle Pettengill, of South China, and will be entering the eighth grade at China Middle School this fall.