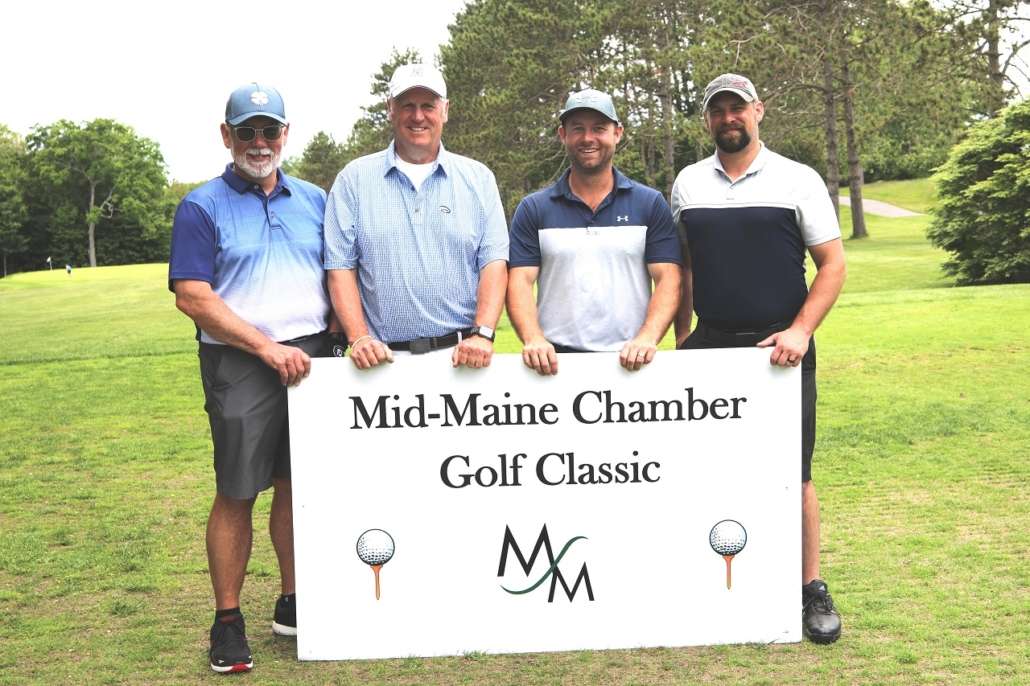 Nearly 50 businesses provided sponsorships or in-kind donations for the tournament.

“We were thrilled with the participation in this year’s event once again – and had a waiting list of teams wishing to participate,” said Kim Lindlof, president & CEO of Mid-Maine Chamber of Commerce. “We were also happy that the weather cooperated, with a beautiful Chamber of Commerce day of sunshine and an enjoyable day of golf for all involved.”

Prize winners were as follows:

Chairman of the Chamber Golf Classic Committee, Rick Whalen added, “We would like to thank the staff at Waterville Country Club, and all of the area businesses for their participation – whether with posting a team, providing volunteers or in-kind donations, or being a sponsor. Your support makes this a successful fundraiser.” 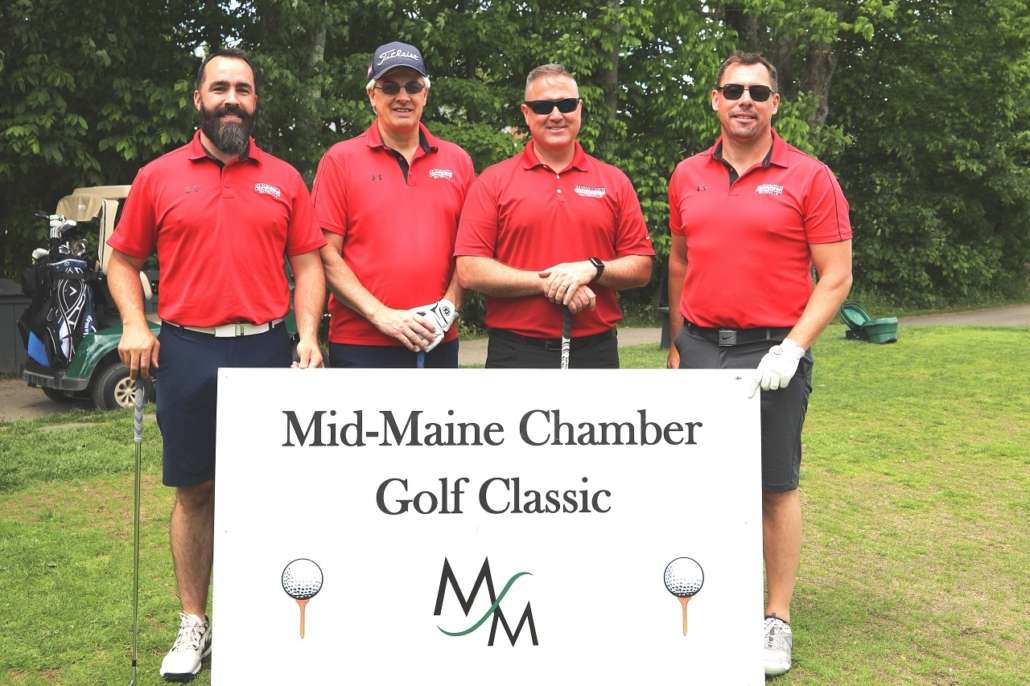 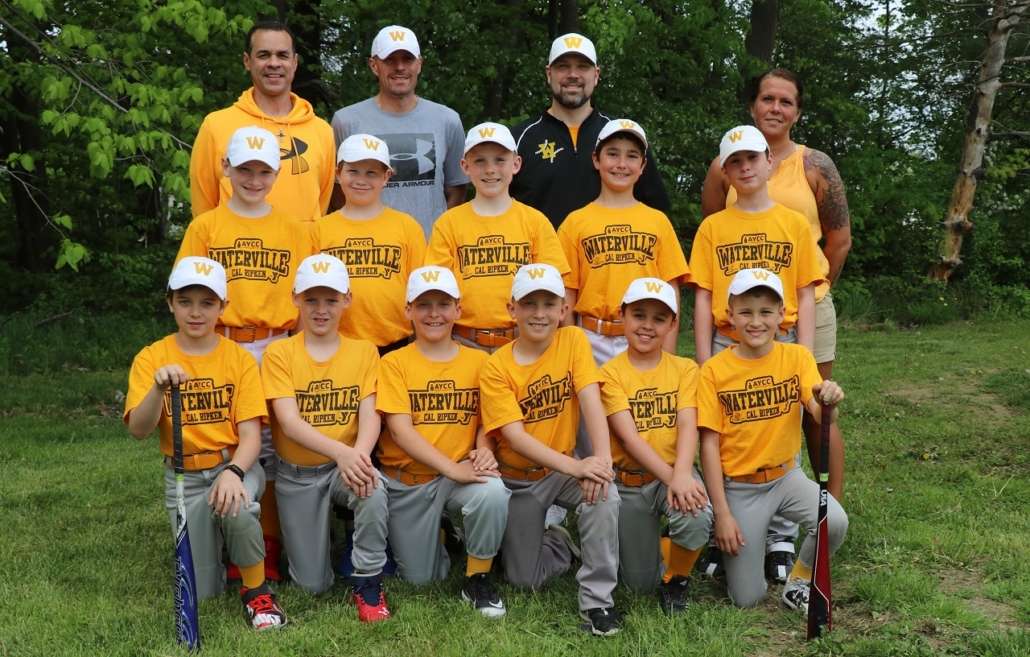 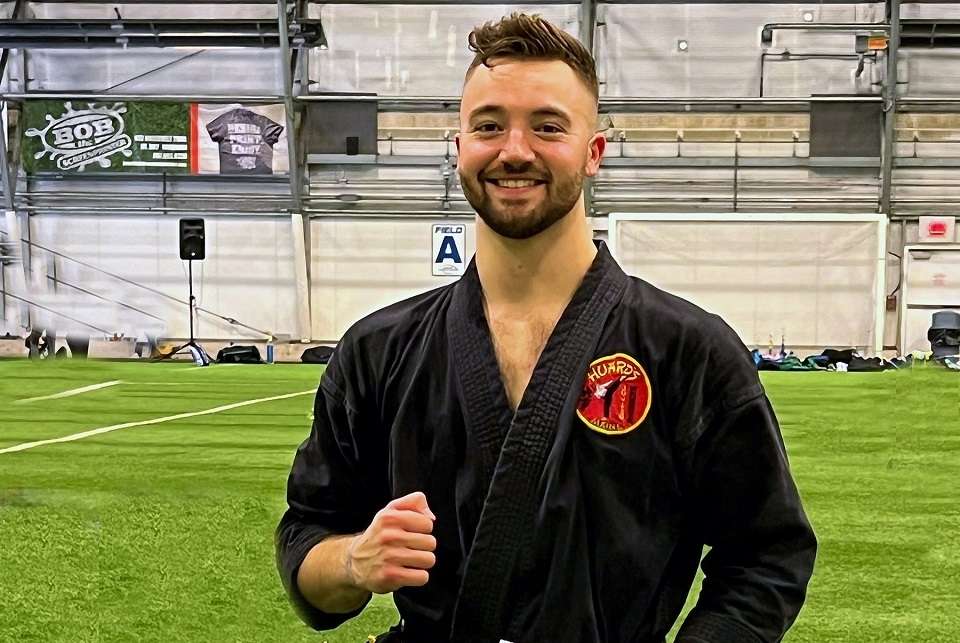 Nathaniel Lombardi is a long time student of Huards Martial Arts. He has achieved a third degree black belt in karate and jujitsu at the school. Lombardi is no stranger to the competition scene, as a veteran member of the Huard’s Sport Karate Team. He has travelled throughout Maine and New England competing in weapons forms, open hand forms and fighting.

On Saturday, June 18, Lombardi traveled down to Gorham to attend the Friendship Tournament. This is only the third tournament Lombardi has attended since the pandemic, which ended the tournament seasons for two years. Local tournaments depend upon volunteer black belts to judge and guide the under belts, and Lombardi did his part by sitting as a corner judge prior to his own competition.

The first event for Lombardi was the weapons division. He picked up his trusty nunchucks and worked his way to fourth out of eleven competitors ages 18-29. He went on to improve his performance in his kata division, finishing third amongst the other highly trained martial artists.

Lombardi’s third division of the day was kumite, or point fighting. The objective of this division is to score five points first by landing a kick or a punch on their opponent to specific areas (light contact to the face, side of the head, chest, stomach and sides). Lombardi says prior to the event, he visualized throwing and landing his techniques on his opponents. This is a technique that helps attain focus and grounds competitors. The division was filled with many men that focus solely on this style of fighting and are extremely fast and agile.

Lombardi knew that he needed to bring his “A” game and win this division so he would have the opportunity to compete in the Grands. He had several fights in the 18-29 division, and managed to capture first in a couple of back and forth battles. He went on to compete with older age divisions and was able to capture the overall Men’s Fighting Grand Championships. He fought many veteran fighters who have competed for years, and have many tricks of the trade that they utilized against the younger Lombardi. He displayed his stamina and athleticism throughout the rounds, and came out victorious. Lombardi works out consistently in the dojo and additionally in the gym to always stay competition ready.

Lombardi credits his instructors and training partners at Huard’s for his successes and was pleased to demonstrate his skill sets to be a role model for the next generation of Martial artists.

He is also a first responder as an emergency medical technician. He works long hours and stills finds the time to devote to his training. Those that know Lombardi credit his discipline, integrity and commitment to himself and his team. 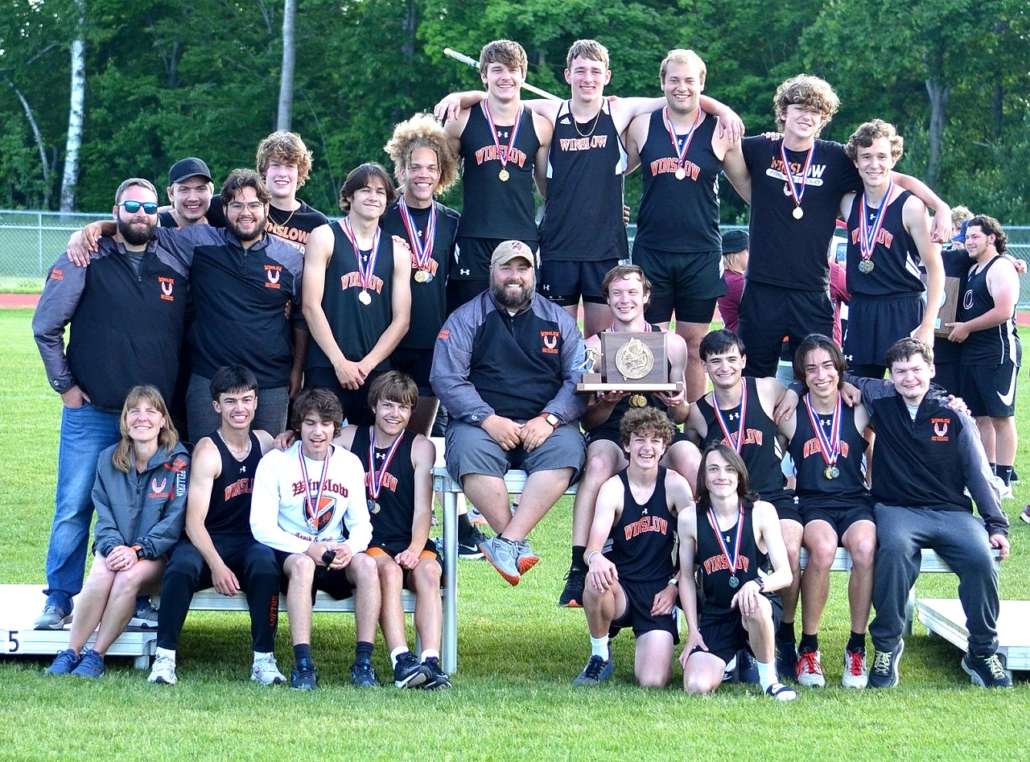 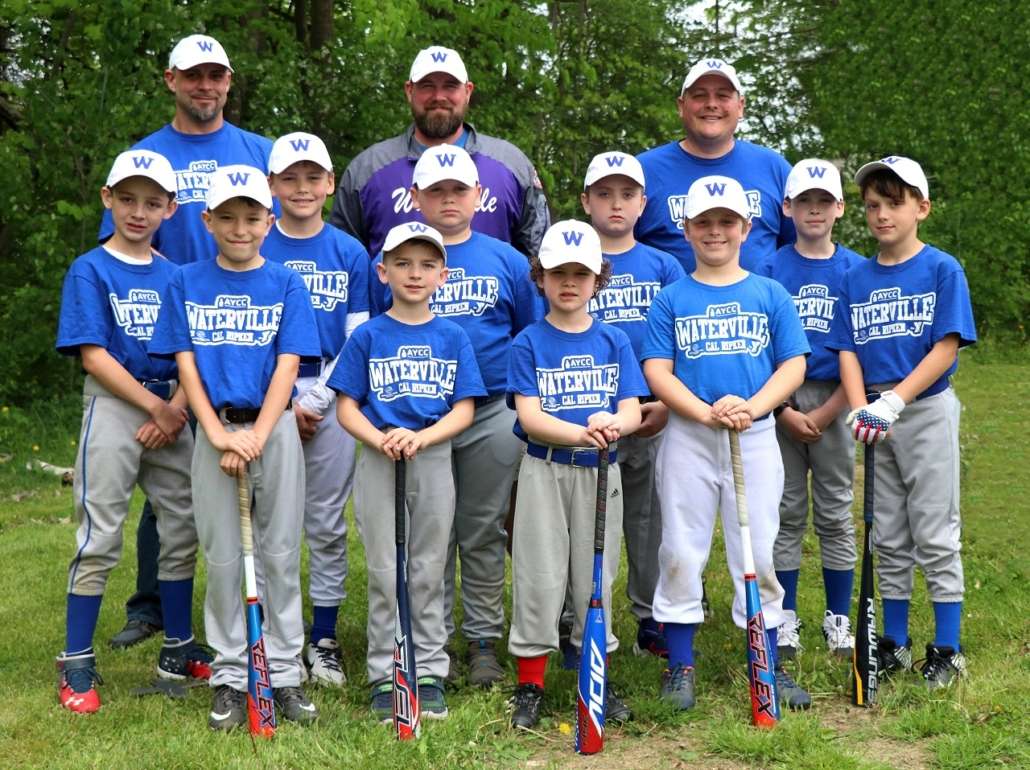 Athletes in grades three through eight had a chance to go to an hour-long clinic to work on baseball skills with the high school team. (photo courtesy of Crystal Pomerleau) 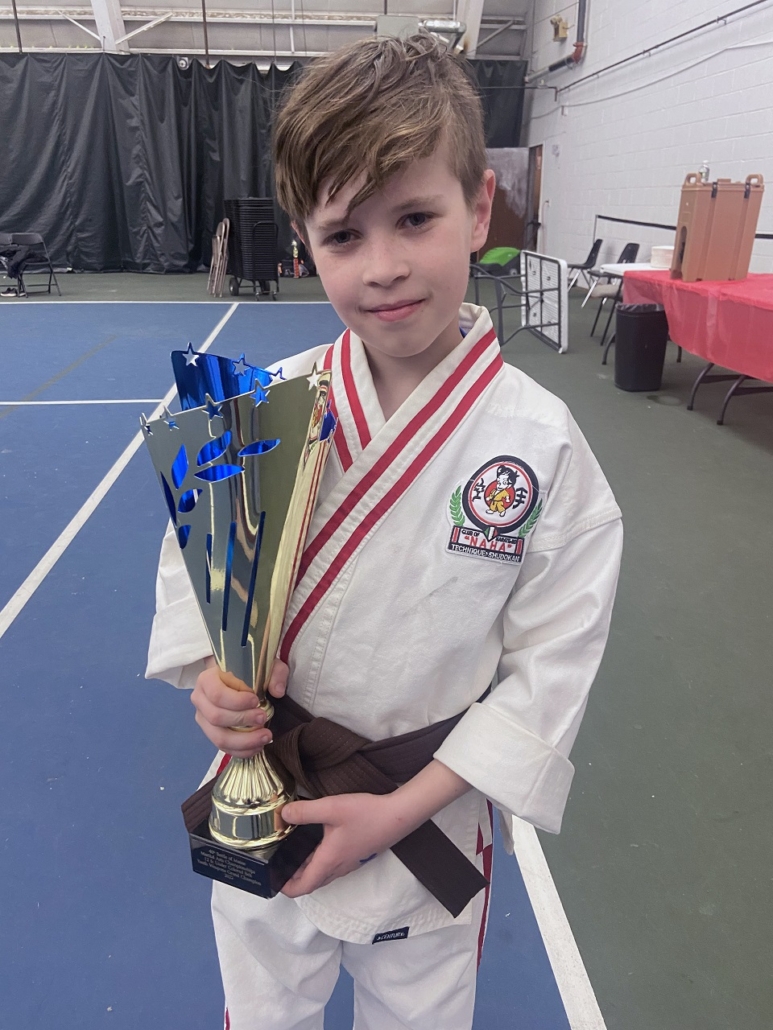 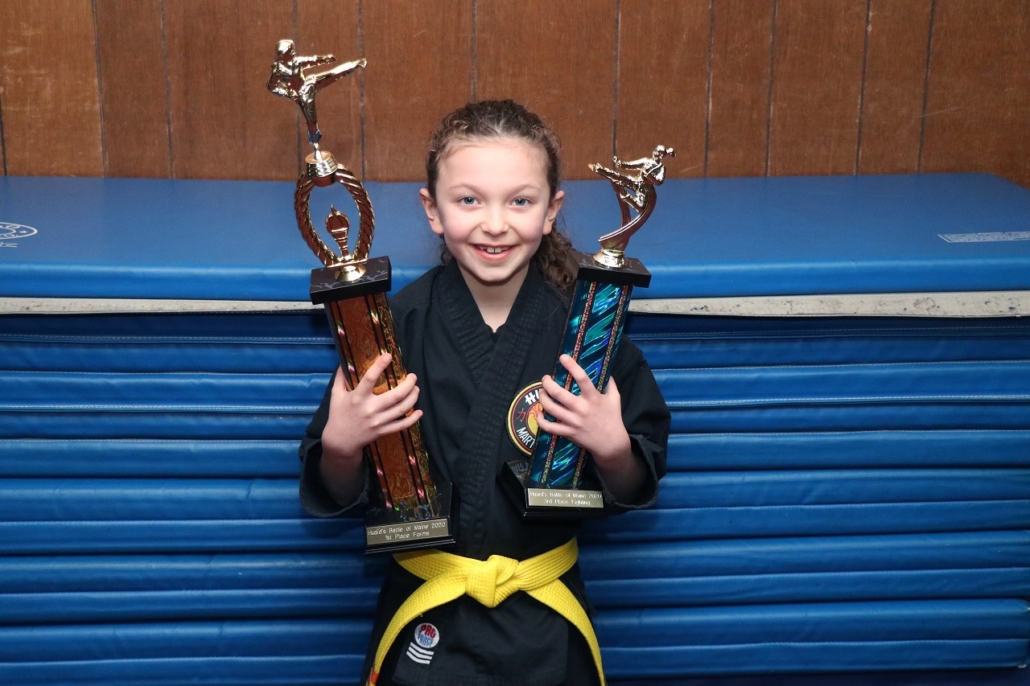 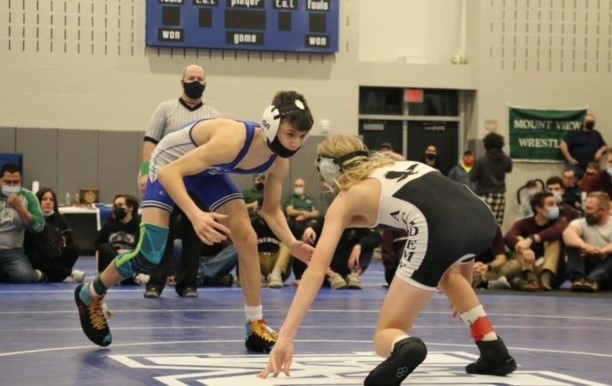 Atop the podium with gold medal. 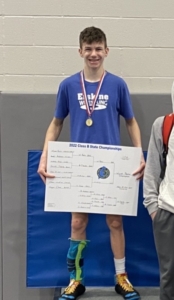 Wynn in action. Photos taken at the Class B state championships on Saturday, February 19, which were held at Morse High School, in Bath.

Wynn Pooler, a freshman at Erskine Academy, in South China, won a state title in wrestling over last weekend.

Erskine Academy competes in Class B, and Wynn wrestles in the 106-pound division. He is the son of Wes and Abby Pooler, of China.

Wynn has been wrestling since he was in kindergarten, and started competing at national tournaments when he was in the fifth grade, when he traveled to New Jersey with Team Maine. Since then, he has wrestled for national club teams based in states such as New Jersey, Georgia, and Maryland, at various national-level tournaments.

In Maine, the largest tournaments typically only have 3 – 4 mats and last a single day. The largest national tournament Wynn has competed at had 58 mats, and lasted three days. While Maine has some great wrestlers, it is rare for two equally-strong wrestlers to meet outside of the state tournament. In order to have great competition consistently, it requires a lot of out-of-state travel.

The top four place-winners from Class A and the top four place-winners from Class B for each weight-class will now compete at the New England Qualifier, otherwise known as “All-States”, at the end of this week. The top three place-winners for each weight from that tournament will then compete at the “New England Interscholastic Wrestling Championship”, being held in Providence, Rhode Island, on March 5. Then the weekend of March 25-27, Wynn will be competing at the National High School Coaches Association (NHSCA) High School Nationals, in Virginia Beach, Virginia, where many of the best high school wrestlers in the country will be competing.

Wynn “enjoys the fact that while wrestling is a team sport, the actual competition is individual, and you don’t have to rely on others to be successful. The sport requires grit, toughness, and discipline. If you fail, you can’t blame others; you just need to learn from your mistakes, stay positive, and work on improving.”

Wynn does want to wrestle in college, but hasn’t yet begun to consider where that might be. If he maintains his straight-A average in school, he should have some options. 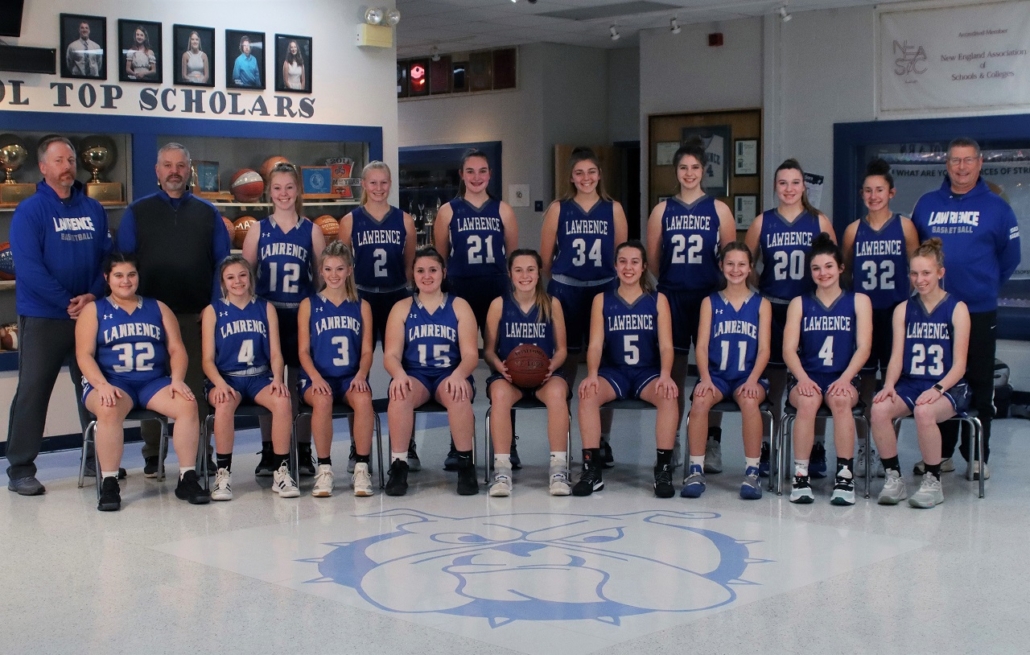