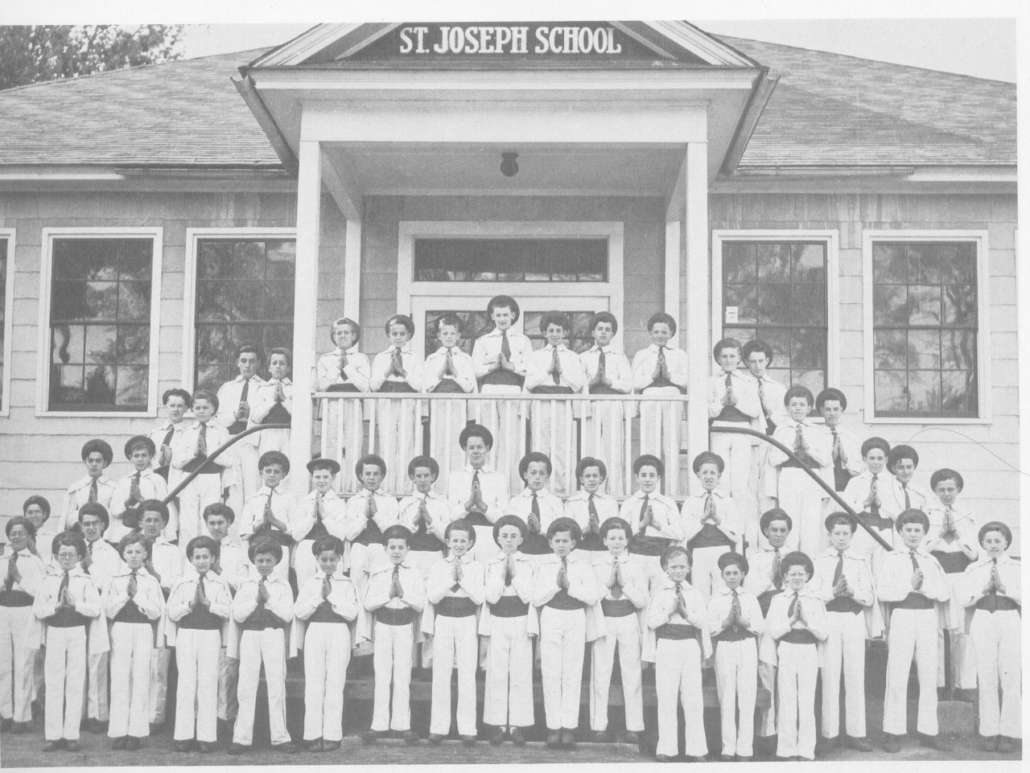 Like any other phase of life, growing up on The Plains also meant school days.

Although the first five years of my school days were spent at St. Francis de Sales Parochial School, there came a time when I had to go to a different school.

St. Francis only accommodated boys until the fifth grade. Girls could stay until the eighth grade. At the time I was there, the “brothers” school across the parking lot had been shuttered. The only occupants were from the Lebanese community, who were using the building as a temporary school while awaiting the completion of their own building, St. Joseph Maronite School, on Appleton St. For some reason I don’t recall, we were mostly segregated from them, and didn’t get to meet them until high school, some of whom became good friends.

So, the boys had to go to St. Joseph Catholic School, on Silver Street, to continue their parochial education, or enroll in a public school. My parents chose to enroll me at St. Joseph’s.

St. Joseph School was located between Preston and Kimball streets, the present site of Notre Dame Catholic Church. It was a one-story, white, clapboard-sided building that sat way back from the street. It resembled your standard-looking school building. It also included a field across Preston St. where we had formulated a crude softball field. The site of the school actually had three softball fields. The other two being in front of the school, one on the south side of the yard, and the other on the north side.

Every day, I would walk up Summer St., actually passing the site of my dad’s old market, and down Kimball St. I only attended that school two years (1960-1962), going on to junior high school my eighth grade year. That is a whole different story.

The teachers at the school at the time was Brother Eugene, Mr. Roberge and Mrs. Pelletier. I only had the two former as teachers, in sixth and seventh grades, respectively. My cousin, E. Roger Hallee, began teaching their my eighth grade year, but I never had him because I had moved on to junior high.

My first experience was strange, because so far my entire school life had been spent with the same kids, most of whom lived in my neighborhood, so we were very well acquainted. Now, I was thrust into an environment where I met other boys, mostly from Notre Dame Parochial School, that was located between King and Water streets, at the time, where the KVCAP main building is now.

There was nothing exceptional that stands out in recollecting those years, except the highly-competitive softball games during recess and lunch hour in fall and spring. The South End was home to some of Waterville’s best athletes, and competing against them, or with them, was an excellent learning experience.

Of course, most of the school year took place during winter months, and nothing much went on outside, except an occasional chance to go to the nearby South End Arena to play some hockey.

I could name some of the guys I went to school with there, but it wouldn’t be fair to those I don’t remember. But I do remember one, who shall remain nameless, who was a left-handed hitter, that could hit the ball all the way to Silver St. – on the fly – something no one else could do. Sometimes in the fall, we would organize touch football games. We also played some soccer.

For those of us growing up in the area of The Plains, those years at St. Joseph School were formative years that prepared us for the next phase in our lives – high school.

Read more of this series here.