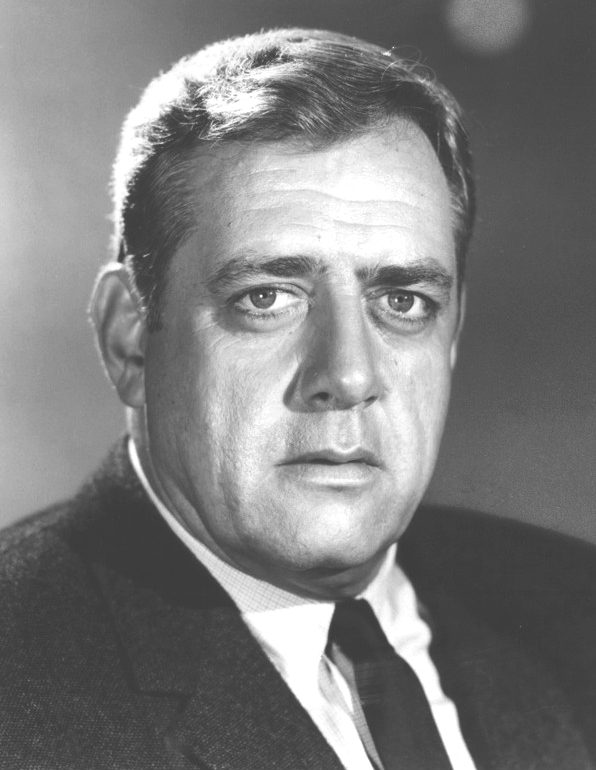 Producer Gail Patrick Jackson saw actor William Talman (1915-1968) as the serial killer in 1953’s The Hitch Hiker, directed by Ida Lupino, and immediately knew who she wanted for the role of District Attorney Hamilton Burger on the Perry Mason TV show. Talman was also one of five escaped killers in 1955’s The Big House starring Broderick Crawford, Charles Bronson, Ralph Meeker and Lon Chaney Jr., and appeared in other similar roles during the fascinating film noir years. He was scarily convincing in the sulfuric venom he exuded in those films, particularly the deranged eyes.

In his portrayal of Burger, the courtroom encounters with defense attorney Mason frequently brought on a look of outrage at a contentious eye contact level when Mason scored points for the defendant, raised objections to Burger’s examination of witnesses on the stand or insisted that certain testimony was irrelevant and immaterial. And he gave the same tit for tat.

However, both characters, sometimes begrudgingly, respected each other, both upheld the integrity of the law and both were in pursuit of justice and the truth. Burger himself stated a few times that, when he lost a case, it was a win because an innocent person didn’t go to prison or the gas chamber.

In 1960, Talman was found smoking marijuana with a group of friends and was fired from the show for a few months, until a vociferous letter writing campaign and the high pressure lobbying of CBS by producer Jackson, Burr and other cast members got Talman reinstated .

Talman came down with lung cancer in 1968 after decades of chain smoking and filmed a public service announcement on the dangers of cigarettes not to be shown until after he died. It can be seen on YouTube.

Ray Collins (1889-1965) in his role as Lieutenant Arthur Tragg almost stole the show time and again, not only with his formidable presence as Chief of Homicide, but also with his infectious sense of humor in many scenes. At one murder scene, Tragg cuts Mason some slack with the gathered evidence but states that District Attorney Burger would have his own head if the latter ever found out. And just about every time Mason would show up even at the most out of the way locations to help his client, Tragg would appear with his usual “Good morning, Counselor,” and an arrest warrant.

Collins worked often with Orsen Welles and was in the cast of the original radio broadcast of War of the Worlds that caused a nationwide panic. He too was a chain smoker and passed away from emphysema, at the age of 74, on July 11, 1965.

The many actors and actresses who made guest appearances included some memorable ones:

Angie Dickinson (1931-) was the defendant when a man who was blackmailing her wound up dead in an episode from the 1957 first season.

Joan Camden (1929-2000) appeared twice during the 1957-58 season as two different variants of the scorned woman, the first a collaborator/girlfriend with an extortionist who winds up dead and the second as a defendant whose ex-boyfriend is found dead and her fingerprints are on the gun. She brought a spitfire bitterness that reminded me of such actresses as Joan Crawford, Katherine Hepburn, Susan Hayward and Maureen Stapleton at their best.

Douglas Kennedy (1915-1973) was a gifted character actor who also appeared twice during the first season and as the actual killer – in one as a detective who murdered another detective, tries to kill Mason in the lawyer’s office but is caught by Lt. Tragg and his men who are hiding in the next room. A later episode has him as a corrupt lawyer who helps his girlfriend in the murder of her husband. He conveyed a nasty hot-tempered edginess that compelled attention.

Henderson died in 1973 in Honolulu after he suddenly came down with cancer while filming episodes with Jack Lord in Hawaii Five O.

Judy Tyler (1932-1957) played a delightfully sultry chorus line girl in a December 1957, episode seen six months after she was killed with her husband in an automobile accident . She was most famous for a starring role with Elvis Presley in Jailhouse Rock.

Ben Wright (1915-1989) played a jeweler who kidnapped his business partner and assisted in the murder of a second one when an embezzlement scheme goes awry. He was most “fondly” remembered for his role as the Nazi Gestapo representative Herr Zeller in the 1965 Sound of Music and conveyed the dubious ambiguity of both roles.