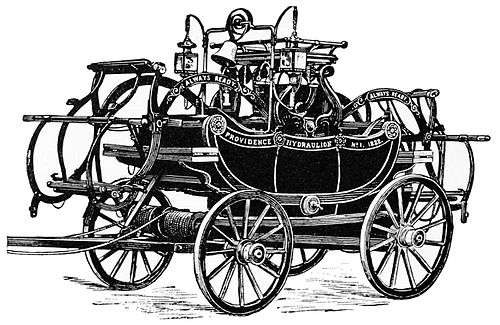 The Hydraulion suction fire engines, produced by Sellers & Pennock, of Philadelphia, in 1822. With the introduction of suctions, the general efficiency of the engines was greatly increased.

Another fire Augusta historian James North described was the one that destroyed Augusta’s bridge across the Kennebec River the night of April 2, 1827. (See the July 28, 2022, issue of The Town Line.) It was spotted a little after 11 p.m. and spread so fast that the “citizens [who] rushed to the scene of conflagration with fire engine and buckets” could do nothing. The building still called the Craig store (see last week’s article) at the northwest end of the bridge was destroyed and other buildings damaged.

Hallowell firefighters responded “with two engines, one of them ‘a new hydraulion, with suction hose’ [apparently a quotation from the April 7, 1827, Kennebec Journal].” But, North wrote, the roads were so bad that they were too late to be much help.

(Wikipedia explains that the earliest engines were the hand tubs, with water dumped by a bucket brigade into a cistern and pumped out. In 1822 a Philadelphia fire engine maker invented a machine, named the Hydraulion, that could suck water from a source, eliminating the hand-filling.)

Henry Kingsbury, in his Kennebec County history, wrote that an early step toward changing Augusta from a town to a city (accomplished in 1849) was the Maine legislature’s March 1835 authorization for the Augusta village corporation “to raise money to maintain a fire department.” The corporation governed an area a mile wide on each side of the Kennebec from the Hallowell line north (presumably to the Vassalboro line).

The first “board of officers” included seven fire wardens. Kingsbury included a long list of men who made up the “engine company” appointed by the selectmen in January 1836.

The early 1850s saw numerous fires in Augusta. Early in his record of the year 1850, North mentioned, without much detail, the “disastrous conflagration at the dam,” which destroyed half a dozen sawmills, a flouring mill and other businesses and damaged the dam itself.

Another fire burned a row of wooden stores on March 9, 1850. Starting about 10 p.m. in a tailor’s shop, it burned out another tailor, a barbershop, a confectionery, a grocery and an unspecified “store.” To limit the fire’s spread, one adjoining building was “pulled down” and two others “damaged by an attempt to pull them down.”

Five fire engines fought this fire, two “old fashioned” Augusta ones, two from Hallowell and “Uncle Sam” from the Kennebec Arsenal, brought across the Kennebec on the ice by First Lieutenant R. A. Wainwright (see box two).

By North’s account, an attendant in the old south wing, then housing 42 male patients, spotted smoke in the hot air flues about 3 a.m. and found a fire in the basement. When he and the doctor on duty couldn’t put it out with buckets of water, they began rescuing patients, who were in danger of suffocating as heavy smoke spread.

Staff first moved patients into the new south wing, though, North wrote, some were too excited or confused to stay there. Ladders were raised to the old wing’s third floor, barred windows broken and frightened patients evacuated. Then the new wing, too, filled with smoke and flames; 27 patients and one attendant died, and others were hurt.

The first fire engine on the scene was “Uncle Sam” from the nearby Arsenal. Augusta’s engine was out of order. Hallowell sent its “Tiger” and “Lion.”

“Uncle Sam” quickly emptied a cistern in the new south wing and the well outside, and the fire blocked access to another cistern. The remaining water source was the Kennebec River, 1,500 feet away and 70 feet below the burning building.

Quick-thinking firefighters parked the “Tiger” on the river bank with 700 feet of hose running uphill to the “Lion.” From the “Lion,” another 600 feet connected to “Uncle Sam.” From “Uncle Sam,” water could reach the top of the building: “the flames were checked, and the north wing and a part of the main building were saved.”

A Dec. 5 inquest found that the fire was caused by an incorrectly reconstructed heating system (dating from the summer of 1849), which put a hot furnace pipe too close to wooden timbers.

The trustees arranged temporary quarters for the patients and repairs to the building; the north wing was open again by the end of December, North wrote. The whole complex was rebuilt, with improvements, by late November 1852.

Yet another fire that North described as “more destructive than any that had occurred before” was spotted about 2 a.m. Saturday, Sept. 3, 1853, in the basement of a spool factory at the west end of a dam across the Kennebec. It destroyed most of the mills rebuilt after the 1850 fire – six sawmills, a flouring mill, and others – plus “a large dwelling-house.”

Augusta’s “Atlantic” and “Pacific” fire engines fought the fire from the nearby bridge until the heat drove them off. The “Pacific” ended up on the south end of the fire, joined by the Arsenal’s “Uncle Sam” and the “Deluge” (whose home town North did not name); they saved several buildings. On the north end, the “Atlantic” extinguished repeated fires on the roof of the Williams sawmill.

North described the building in which the fire started – and which was leveled – as a three-story wooden structure 160-by-60-feet, divided into a dozen “tenements” (apparently shops and businesses, not dwellings). The total loss he put at $75,000, mostly uninsured; 200 men lost their jobs, and most lost their tools as well.

Again, rebuilding was fast, partly because the Williams sawmill was still operating. North said a new machine shop was finished in December, this time with a stone foundation and “brick partitions dividing the tenements passing from the foundation through the roof.” Replacement sawmills went up the next summer.

When the Kennebec County jail burned on March 16, 1808 (see last week’s issue), one of the inmates was a man named Henry McCausland. His story is told in James North’s 1870 history of Augusta and in Charles Nash’s footnotes to the excerpts from Martha Ballard’s diary included in his 1904 Augusta history.

North wrote that McCausland was the youngest son of another Henry McCausland, who came to the Kennebec Valley in 1760. The younger Henry was born in 1759, “served three years in the army, during the revolution; married in 1783, and had five children.”

“In 1793,” North continued, “he became insane on religious subjects, and imagined that his sins could only be pardoned by a burnt offering and human sacrifice, which he fancied the Lord had directed him to make.”

Nash wrote that the designated “burnt offering” was the then-unfinished Episcopal Church, in Gardiner, and the “human sacrifice” its pastor, Rev. Joseph Warren.

On Aug. 22, 1793, McCausland “filled a child’s shoe with live coals from his own fire-place” and carried the shoe to Gardiner. After leaving the coals in heaped shavings hidden under a door, “he took the pulpit Bible and carefully carried it into the woods and laid it tenderly on a stump.” The church was destroyed.

McCausland couldn’t find Rev. Warren, so he decided anyone named Warren would do. On Oct. 18, 1794, he found his victim: Mrs. Pelatiah (Abigail Tibbetts) Warren came home to be with her sick mother. McCausland came into the sickroom, talked for a bit with the two women and suddenly grabbed a butcher knife and killed Abigail.

Soon after, Nash said, McCausland “appeared voluntarily at a public meeting” and confessed. Arrested and brought to court, he insisted on pleading guilty to murder, claiming he was telling the truth.

North wrote that because he was insane, McCausland was not formally sentenced, but stayed in jail for 36 years. He attempted at least one more sacrifice; North wrote that he became friends with the nine-year-old daughter of a jailer, until without warning he almost killed her.

A big man with a “grave and thoughtful manner” and a long white beard, McCausland became a public attraction; “he was visited by thousands, from whom he collected a small fee” for describing his crimes.

During the 1808 fire, North wrote, McCausland not only “made no attempt to escape, but assisted in preventing the escape of others.”

McCausland got a pension as a Revolutionary veteran; county officials kept part of it to pay for his room and board. North wrote that in his old age he learned to read from a jailer’s family and “became a diligent reader of the Bible.” He died Aug. 24, 1829, aged 70, and was buried in Gardiner.

Kennebec Arsenal commander Robert Moncrief Auchmuty Wainwright was born in Newport, Rhode Island, on June 19, 1815, the oldest of eight children of Robert Dewar Wainwright and Maria Montresor Auchmuty (1789-1861), according to an online site.

(The Find a Grave site says Robert Dewar Wainwright, born June 14, 1781, in Charleston, South Carolina, was a colonel in the U. S. Marines; took as his first wife Juliana B. Scott, daughter of Gustavus Scott of Maryland; was married to Maria Auchmuty when he died; and is buried in the Congressional Cemetery, in Washington, D.C. However, this site says he died Oct. 5, 1811, and shows an inscribed gravestone to prove it.

(Another source says Colonel Robert D. Wainwright died in the fall of 1841, and cites as evidence an article on consequent Marine Corps promotions, effective Oct. 6, 1841, from the Oct. 16, 1841, issue of the New-York tribune.)

An online military history site says Robert Moncrief Auchmuty Wainwright graduated from the U.S. Military Academy at West Point (opened in 1802) in the Class of 1835 and joined the Army as a brevet second lieutenant. He served in multiple posts, mostly at arsenals, including the Kennebec Arsenal from 1842 to 1847 and from 1848 to 1851, with service in Mexico intervening.

(Wikipedia explains that brevet means a higher title given “as a reward for gallantry or meritorious conduct but [which] may not confer the authority, precedence, or pay of real rank.”)

North wrote that Wainwright was commander at the Kennebec Arsenal from May 1841 until December 1846. He served in the Mexican War until December 1848, when he again took charge of the Arsenal until Sept. 5, 1851.

Wainwright was Chief of Ordnance in the Department of New Mexico when the Civil War broke out in the spring of 1861. He was promoted to major early in the war and ended as a brevet colonel. Service included “arming the fortifications at New York harbor” from August 1861 to October 1862 and commanding the New York Ordnance Depot through the end of March 1864.

After the war, Wainwright commanded Benicia Arsenal, in California, until Dec. 2, 1866; he died there Dec. 22, 1866, and is buried in the Congressional Cemetery.