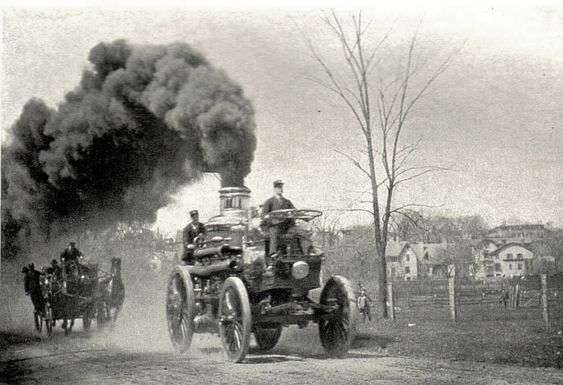 The 9-ton steam powered fire engine was a revolution in its day, they were built by the Amoskeag Steam Fire Engine Company, of New Hampshire, late 18th century, and cost $7,000.

The next three articles in this series will talk about fires and the development of fire-fighting in Augusta. See also the issue of Aug. 27, 2020, where fires in China, Fairfield and Palermo were described; and the issue of Feb. 4, 2021, for Augusta’s great fire of September 1865.

James North’s year by year history of Augusta, published in 1870, records several fires before the 1865 disaster. The first he knew of was in 1785 (when Augusta was still the northern part of Hallowell): “Elias Craig’s Hatter’s shop” burned on Dec. 1.

His house and shop were on the west side of the Kennebec at the intersection of Bridge and Water streets. Charles Nash, in his 1904 history of Augusta, listed the places Hallowell town meetings were held between 1771 and 1792. The majority were at Fort Western in 1771 and 1772 and in the town meeting house after 1783; in between, voters assembled in three different inns, a barn and several houses, including in 1782 three times in Elias Craig’s house.

The house was of so little value that the assessors did not count it in 1784, North wrote. Indeed, he said, they counted only 38 “dwelling houses” for a population of 682 white people and 10 black people. Realizing the disparity, they explained that many families still lived in the “log cabins or camps which they first built,” which weren’t worth listing as taxable.

The 1784 assessors’ report listed 21 varied commercial holdings. Craig’s was one of five shops, and his stock in trade was valued at 50 pounds.

Craig rebuilt the shop after the fire, and enlarged the house at intervals. When that corner was rebuilt as a commercial block, the house was moved to Jefferson Street.

North wrote that Craig “possessed the confidence of the settlers, many of whom were welcomed to his house upon their arrival” before they moved to their new homes.

In 1792 one of his house guests was James Johnson. On May 31, he and his brother Samuel were firing celebratory cannons “probably on account of some recent news from France,” and one cannon exploded, injuring the two men. They were brought to Craig’s house, where midwife Martha Ballard attended to them. Apparently both survived.

Craig was a selectman in Hallowell, first elected in March 1795. He was among the 161 residents petitioning the Massachusetts legislature to create the separate town of Augusta in May 1791. The request was approved in February 1797, and a town named Harrington was organized; in June of the year, its name became Augusta.

Criag was elected selectman again at the first meeting in Harrington, in April 1797, and later was an Augusta selectman. North wrote that he served a total of seven years in the three successive towns. In 1806 he was the local coroner, according to Nash’s history. He moved to Fayette before his death on May 6 or May 7, 1837. 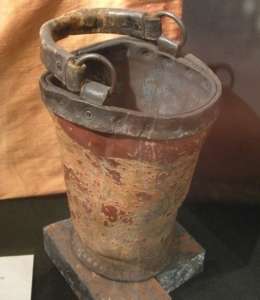 North recorded the earliest fire department in the central Kennebec Valley, a “private fire company” formed in the 1790s in Augusta (then still Hallowell). The “principal citizens” who started the company wrote a charter requiring each to have on hand “two leathern fire buckets, and a canvas bag for the removal of goods at fire.” An on-line fire department history says insurance companies formed such associations to protect their members’ property.

The buckets, North explained, had been in use in the American colonies since the 1600s. They were oblong with leather handles, “very durable and convenient to pass water.” Association members put their names on their buckets.

On March 11, 1799, North wrote, two years after Augusta separated from Hallowell, town meeting voters appointed six fire wardens (Elias Craig was one of them). Later in the year town officials bought a fire engine and appointed firefighters (North said 13, Kingsbury’s Kennebec County history names 12, the online site names 14). The firefighters were called “engine men”; they were instructed to create an organization and make regulations “not repugnant to the constitution of the Commonwealth [of Massachusetts]).”

North did not mention the firefighters when he reported briefly on the Feb. 11, 1804, fire that burned a building whose tenants included Peter Edes’ printing office, where the Kennebec Gazette was published (the paper resumed publication March 23).

Nor did he describe any suppression efforts when the Hallowell Academy building burned on Jan. 29, 1805. Opened in 1795, it was in the area that remained Hallowell after the 1797 division. (See the Sept. 16, 2021, issue of The Town Line for more information on the two Hallowell academies.)

More than once North credited Hallowell with helping put out Augusta fires. He wrote that on Jan. 8, 1808, an old and a new blacksmith shop on Water Street burned down, and Nathan Weston’s old building beside them was “pulled down to prevent the flames from spreading.”

He continued, “The Hallowell engine arrived early and afforded great assistance in subduing the fire.” Total damage was $900; residents contributed $600 “to the relief of the sufferers.”

Hallowell came to the rescue again during a more serious incident a little more than three months later. The spring of 1808 was the period of the uprising of squatters against local government sometimes called the Malta War (Malta was an early name for Windsor, Maine). Public officials were attacked, and there was concern that public buildings, like the Kennebec County jail in Augusta, would be next. 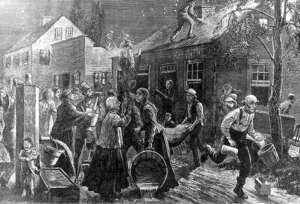 A chaotic scene in early America when a house caught on fire. Bucket brigades were usually the main method of fighting fires. The whole community would pitch in, or risk the spread of fire.

Around sunset on March 16, 1808, North wrote, “a sudden alarm was given that the jail was on fire. The fire was discovered in the upper story. It rapidly spread, enveloping the building.”

The jailhouse was destroyed. The prisoners were evacuated, and North recorded that because of the unstable times, the jailer had already moved out essential records.

North wrote and quoted (probably from the March 18, 1808, issue of the Kennebec Gazette): “The citizens of Hallowell attended in great numbers ‘with both their engines,’ and were entitled to ‘much credit’ for their ‘prompt and spirited exertions.'”

The same evening, incendiary devices started a fire upstairs in the courthouse, but it was noticed in time to be put out before there was much damage. At 10 p.m., two local judges asked Major-General Henry Sewall to call out the militia, and Sewall immediately ordered the Augusta Light Infantry to guard the courthouse and the prisoners’ temporary accommodation.

Later, it was determined that the jailhouse fire was started by one of the prisoners, a tavern-keeper named Edward Jones, jailed for stealing. The courthouse fire probably was set by some of the rebellious settlers; North gave no names.

Jones, according to the Oct. 21, 1808, Kennebec Gazette (cited by North), was sent to the state prison to serve two months in solitary followed by nine years’ hard labor for arson. He was also convicted of stealing; that sentence (whether concurrent, North did not say) was 15 days’ solitary confinement and a year at hard labor.

And what, readers may wonder, did Kennebec County do with no jail? The answer is that county officials had a new one built; and North recorded its progress.

Right after the fire, he wrote, the county sheriff had a temporary wooden building put up near the county courthouse, and in April 1808 the Court of Sessions accepted it.

Court officials appointed a local man as superintendent of the interim jail and also charged him with cleaning up the old site, where they directed a new stone jail be built as soon as possible. Meanwhile, they paid good money to keep prisoners guarded in the “insecure” temporary quarters.

North described the new jail as a two-story building with walls of “large blocks of rough hammered stone fastened together with iron dowels.” Each floor had two blocks of cells separated by a central hall.

North wrote that the new jail “was much in advance of the prison accommodations of that day, and was considered a very expensive and secure structure.”

However, by 1857 the county commissioners were ready to replace it. North quoted their justification: the building was “wholly unfit for the purposes for which it was intended and used; more especially on account of the want of sufficient warmth, light, ventilation and cleanliness; it was inhuman, dangerous to life, and detrimental to health and good morals to imprison persons therein.”

The new Kennebec jail was built close to the courthouse and the old jail, at a cost of about $60,000, with preliminary study beginning in the spring of 1857 and the building ready for a well-attended public inspection on Feb. 1, 1859. A four-story stone and brick building, it had 54 regular cells and eight “privilege rooms.”

The regular cells were eight feet square, except for a dozen tiny ones, three feet 10 inches wide, on the second floor. The privilege rooms, which North also classed as cells, were eight feet by 19 feet.