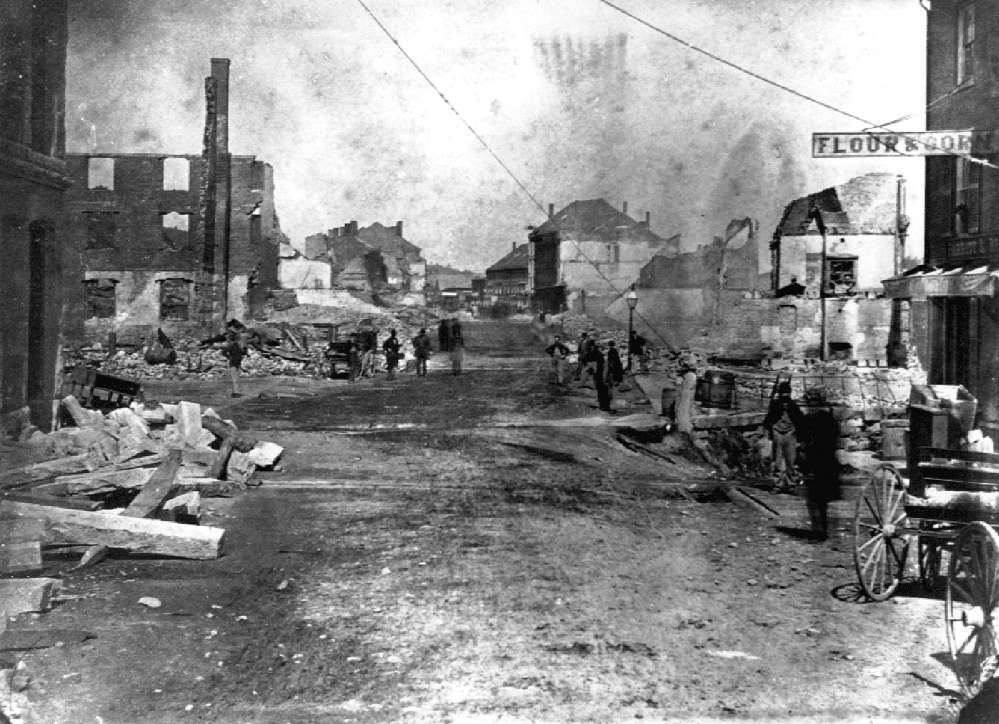 Your writer hopes her readers are not tired of fires and firefighting, because there will be one more article on the theme after this one. As usual, the topic has expanded because of more information than expected from easily available sources.

One invaluable source is the University of Maine’s on-line DigitalCommons collection. It includes various City of Augusta reports for many years.

After the April 12, 1861, southern attack on Fort Sumter started the Civil War, James North’s Augusta history focused on the local contribution to and effects of the war. He did not neglect other events, however, including fires and firefighting. Early on, he combined the two topics, describing the patriotic parade on Thursday, April 18, 1861, that was led by the Augusta Band, with the Pacific Fire Engine Company next in line.

The first fire North mentioned during the Civil War years was the February 1862 destruction of the Phenix Block on Water Street. Daniel Williams built these three connected three-story stores in 1839; North called them “superior in finish to any yet erected.”

The initial tenants included the post office, with Reuel Williams’ law office above it (Daniel and Reuel Williams were brothers; the family was prominent in Augusta’s history); a shoe store; and H. A. Kittredge’s store selling “West India goods and groceries.” The printing shop for The Age newspaper had the whole third floor.

By February 1862, a hardware store had replaced the grocery; the shoe shop had a different owner; and in the basement below the post office were the press rooms for both The Age and the Kennebec Journal, with The Age print shop still filling the top floor.

On the cold Saturday evening of Feb. 22, a fire started in the shoe store, under the stairs. A fire engine responded, hose was run up the stairs and the fire “nearly extinguished” – when the water stopped running.

The problem was a broken joint (in the hose, or on the engine? North did not specify). While it was being replaced, the fire flared up; but renewed water quickly had it “nearly extinguished” – when the water stopped running again.

This time, the hose had been cut. North wrote that the suspects were “some unruly soldiers of the Fifteenth Regiment,” but nothing was proved.

While the hose was being repaired (and placed under guard), a valve on the fire engine froze. By the time the valve was thawed with hot water, the fire was out of control. Residents who had gone home after responding to the initial alarm were called back, and Hallowell sent two additional engines. No other buildings were affected, but the Phenix Block was gone.

Another major fire began Monday evening, March 31, 1862. Starting in a wharf storehouse, it spread to a second storehouse and then inland to burn down four wooden buildings on the river side of Water Street. North identified them as a store, a carpenter’s shop, Pumpkin Tavern (“a dwelling occupied by a number of families”) and the pre-1800 building known as the Titcomb house, after an early settler named Samuel Titcomb.

North commented that the burned buildings were “of little value,” and losing them was a step toward widening Water Street, accomplished in 1867. (The remaining east-side wooden buildings were moved back.)

A third major fire in 1862 started in the Kennebec Hotel’s stable about 10 p.m. Monday, Oct. 13. Flammable hay spread the fire through the stable and to the hotel; both buildings, two adjoining stores and a brick house were destroyed and a brick store damaged. Two horses were lost.

The next fire North noted was the burning of the South Parish Congregational Church, which he called the South Parish meeting-house, the night of Monday, July 11, 1864. The church, dedicated on Sept. 20, 1809, was a large, two-story building with a steeple that was 125 feet tall, counting the weathervane.

During a bad thunderstorm, lightning struck the steeple and set the building alight “instantaneously, from top to bottom.” It burned completely in an hour; “only the curtains behind the pulpit, the communion service and bible with a few cushions were saved.”

North wrote that the steeple had always had a protective lightning rod. This time, he said, the “volume of the electric fluid was too great for the rod to carry, and it passed into the building.”

He emphasized the sense of loss, using phrases like “time-honored edifice,” “hallowed associations” and “landmark.” And, he wrote, parishioners met the next evening and decided to rebuild. The cornerstone of a new church, built of granite, was laid on May 26, 1865, and the church “was dedicated Thursday evening, July 5, 1866.”

Another fire in 1864 burned down the Portland and Kennebec Railroad’s depot on Christmas Eve. A strong north wind spread the fire quickly from the northeast corner throughout the building, but snow on the ground and on nearby roofs protected the neighborhood.

Lost were a freight train headed for Skowhegan, stopped by snow-covered tracks, and “the dummy engine and car, and six passenger cars.” 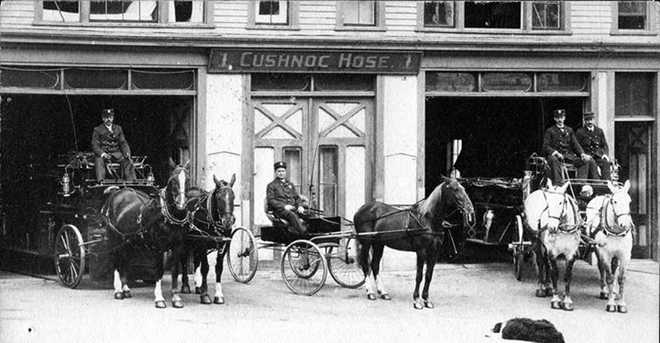 North wrote that the Cushnoc was placed on a wharf right behind the new block of wooden buildings on Water Street, where the fire started, “in full confidence that, with its powerful aid, the fire would be easily subdued.”

The combination of wooden buildings, wooden sidewalks and a “hot and dry” southeast wind was too much. The Cushnoc was almost lost as the wooden wharf and the lumber piled on it caught fire. Eri Wills, the chief engineer, saved it by cutting the hose and turning the engine’s water on itself.

What Wills did, North said, was remember a particularly strong wall that might be a firebreak. To protect it, he broke through an attic roof so that a hose could be run from the Cushnoc 60 feet up to drench the fire from above. North gave a dramatic description, apparently as an observer, of the men’s danger, as buildings collapsed around them and the street side of the one they were standing on repeatedly caught fire.

By 11 a.m. the worst seemed over. Around noon “a train despatched for assistance” brought two Gardiner fire engines and one from Pittston, which helped finish the job. North’s history includes a list and map of 81 buildings lost; damage amounted to $500,000. There is no record that any lives were lost.

(A Sept. 14, 2015, Kennebec Journal article announcing the observance of the 150th anniversary of the Great Fire reported that Augusta’s Atlantic and Pacific and Hallowell’s Tiger would be on display. Reporter Craig Crosby wrote that Hallowell still owned the Tiger, the Town of Oakland owned the Atlantic, and the Pacific was privately owned.)

The next major fire North described cost one life. It was at what was in 1868 the Eastern Branch of the National Military Asylum, precursor of today’s Togus VA Medical Center, in Chelsea, about four miles east of Augusta.

The asylum opened in the fall of 1866 on property that included a mineral spring (supposed to promote health) and a hotel and associated buildings. North wrote that the military added a 5,000-square-foot brick hospital.

On Sunday, Jan. 7, 1868, a cold, windy night, a fire that started about 9:30 p.m. in the heating system burned most of the old buildings. The 270 inmates were forced “into the open air of a severe winter’s night”; those too sick to move “were brought out on mattresses and laid, for want of shelter, upon the snow.”

To add to the disaster, North wrote, “the soldiers” – presumably he meant men responsible for the patients – broached a barrel of medicinal whiskey and got drunk. “Disgusting scenes of disorder and violence ensued.”

Augusta firefighters and ordinary citizens brought the patients to safety, the sick in private homes and the rest in municipal buildings. One man, “weak from disease, and suffering from exposure,” did not survive.

In the aftermath, some patients were transferred to other branch asylums and some accommodated in surviving buildings. After hesitation, the “board of managers” decided to rebuild more appropriately. North wrote that in the spring of 1868, “four large brick buildings were commenced, each one hundred feet long by fifty feet wide [the dimensions of the brick hospital], placed in the form of a square with a courtyard in the center.”

The report of Augusta’s 1858 Committee of Finance for the fiscal year that ended March 19, 1859 (a DigitalCommons document), said that Eri Wills was the “chief engineer” (apparently the equivalent of a modern fire chief) in 1858 and was paid $50. The annual appropriation for the fire department was $700; almost $800 was “undrawn” from the prior year.

The committee listed the value of Augusta’s fire apparatus as follows: Atlantic and Pacific fire engines, $2,000 plus $1,500 for “Engine house and lot”; the Deluge engine “and apparatus,” $400 plus $50 for its engine house; and another $50 worth of “[h]ooks, ladders and carriages.”

In 1865, according to the March 17, 1866, end of fiscal year report of the finance committee and the treasurer, Augusta appropriated $8,000 for the fire department. Wills was still paid $50; he had two assistant engineers, paid $25 apiece.

A China resident named George W. Jones was arrested, tried and convicted for setting Augusta’s 1865 Great Fire, and was in the state prison when North finished his history in 1870.

As North tells it, Jones had a lobster business in Portland and sold lobsters from a “cart” in Augusta. Over the summer, soldiers had taken lobsters without paying. City police had not responded to Jones’ satisfaction and he had “threatened vengeance upon the city.”

Saturday night Jones was in China, and a barn “belonging to a person he had an antipathy against” burned. Sunday morning he walked to Augusta, arriving before 4 a.m., and stayed during the fire. Monday he took the train to Portland. Tuesday as he sold lobsters there his cart was “run against and damaged” and the offender refused to pay.

That night a woman saw a man setting fire to shavings outside the offender’s house. She called in an alarm, the fire was put out and examination showed the knife that made the shavings had “two gaps in the blade.” Jones was arrested in a neighboring town; the knife in his pocket had matching gaps in its blade.