The Samuel Osbornes discussed in last week’s article were not the only Black family in 19th-century Waterville. Various sources mention several others, though details are often scanty and/or confusing.

Local historians did not consistently state the race or nationality of people they wrote about. For example, the index to Whittemore’s history of Waterville lists Samuel Osborne on three pages; on only one is he described as “colored.” There is no indication of the race of other Osbornes (and Osborns) mentioned in the history.

At the end of his chapter on early settlers in Whittemore’s history of Waterville, Aaron Plaisted wrote that for many years, Waterville’s population was “entirely American.” Your writer assumes he meant British, because he goes on to differentiate French Canadians (who will be discussed in the next article in this series) and Irish (whom your writer combines with the British, and who were numerous in other towns, sometimes specifically mentioned as Irish [in Lowden’s Windsor history, for example]).

Plaisted wrote that there was a colored Seco family in Waterville in the 1820s (see the April 14 issue of The Town Line for China Secos, and below for a few more). And “the first barber in town, George Boardman, was a colored man, very much of a dandy and more elegant in his dress and manners than many of his white fellow citizens.”

Prince Henry lived with his wife Venus on the small farm he owned on the west side of Waterville, on what Isaac Bangs, in his chapter in Whittemore’s history, called the second rangeway. Bangs wrote that Prince Henry must have died before 1825, because Venus was a widow by 1826.

Bangs wrote that Freeman lived in Salem, Massachusetts, when he enlisted in the Continental Army from the first Essex County regiment. He is recorded as a private who served from Feb. 1, 1777, to Feb. 5, 1780, including a stint at Valley Forge in 1778.

This information is challenged by an on-line list of early Waterville families, which says Henry (died about 1841) and Venus Freeman were the parents of Sampson Freeman, born about 1765 in Ipswich, Massachusetts. Ipswich and Salem are about 10 miles apart, north of Boston; a man born about 1765 would have been very young to be a soldier before and during the Revolution.

The soldier Sampson Freeman whom Bangs described came to Peru, Maine, and from there to Waterville in 1835, where he married Venus Henry “after a brief acquaintance.” (The on-line Sampson Freeman would have been close to 70 by 1835, and Bangs’ Sampson Freeman likely even older.)

The Freemans lived on the farm Venus had inherited until her death six years later (about 1842?), Bangs continued. Sampson Freeman died in 1843.

The Sampson Freeman listed in the genealogy on line married Catherine “Cata” Coburn on Oct. 6, 1788, in Dracut, Massachusetts.

Sampson and Catherine Freeman had three daughters, Peggy, Jane and Rhody (b. 1806), and one son, Jefferson (born 1809). A search for Jefferson Freeman gave no additional information; but a source cited on-line for him and his sister Rhody was a history of Peru, Maine.

On June 7, 1835, the Sampson Freeman described on line and Mary Foye filed marriage intentions in Waterville.

Mary Foye was “of Augusta” in 1835 and was the widow of Hosea Foye, identified on line as “a black barber in Augusta.” She died before 1843. (Perhaps the marriage intentions were not carried out, and Sampson Freeman married Venus Henry instead?)

One point of agreement between Bangs and the on-line genealogist is that Sampson Freeman died in 1843 – March 28, according to the on-line source – and was buried in Waterville’s Monument Park – near Venus’s grave, according to Bangs.

Kingsbury wrote in his Kennebec County history that the bodies buried in Monument Park were moved south to Pine Grove Cemetery, on Grove Street, after that graveyard was dedicated in May 1850.

Linwood Lowden said in his 1993 history of Windsor that that town’s early settlers included one Black family, who apparently did not stay long. William Swain, from Pittston, acquired a lot in the south part of town in 1803, although Lowden wrote that he had settled there before the area was surveyed in 1802.

The lot was on Hunts Meadow Road, which runs southwest from the intersection of Routes 17 and 32. Lowden wrote that a hill on the road “where Dan Wilson built his home (and lived until recently) was once known as Swain Hill.”

On Aug. 7, 1799, Swain and Mehitable “Hitty” Griffin filed marriage intentions in Hallowell; Lowden assumed they followed through. Swain sold his lot on Feb. 27, 1804, and “apparently returned to Pittston,” Lowden wrote.

Kingsbury, in his chapter on Windsor, wrote that “the first negro who came into the town” was named George Brown. He worked for James Wingate, who came from the Bath area and established a farm in South Windsor, where in 1892 his grandson, also James Wingate, lived.

Brown evidently died in Windsor, because Kingsbury wrote, “His body lies under the pines on land owned by Mrs. Townsend.”

Unfortunately (and not untypically), Kingsbury gave no dates, though the context suggests Brown came to Windsor before 1820; nor did he say whether Brown came with Wingate or went into Wingate’s service after each arrived separately.

The Seco family, some of whose members in China were mentioned in the April 14 issue of The Town Line, scattered into many other Maine towns, reportedly including Vassalboro, Windsor, Winslow and Palmyra, and some moved out of state.

He was a “respected lumberman and river driver,” who helped build a bridge that he predicted would fall down. It did; and “the engineer who had ignored Seco’s warning asked to have Seco fired. The construction boss refused and said, ‘I don’t see how I can; he is one of my best men.'”

Charles L., according to an on-line genealogy, was born in Fairfield. The 1850 census listed him in Kingfield, Maine. His first wife, Eliza Sewall, was born in China about 1829; the genealogy says they were married in Boston, Massachusetts, on Sept, 19, 1852.

Their only child is listed as John T. Seco, born about 1857 in an unspecified Maine town. He apparently spent his adult life in New Haven, Connecticut.

Eliza May was in Chelsea, Massachusetts, when she married for the first time, on Nov. 25, 1891, to John Eatman from New Brunswick. On June 27, 1900, she married again, to Edward William Boston from the British West Indies.

On June 26, 1899, Charles E. married a French-Canadian woman from Nova Scotia or New Brunswick, Harriett “Hattie” Huding Luddlen, in Chelsea, Massachusetts. (Did he meet her through his sister’s first husband?) By the 1900 census, the couple were in Winslow; Charles E. was described as a boilermaker.

According to a comment historian Taylor made years ago to this writer, there was a Samuel Seco in Vassalboro, known as Sammy. Residents had a saying, “As black as Sammy Seco.”

In Palmyra, the 1820 census lists a widow named Rachel Seco, and the 1870 census lists Eliza Seco. Palmyra is in Somerset County, north and east of Pittsfield, connected to the Kennebec River Valley by Interstate 95 and the Sheepscot River. 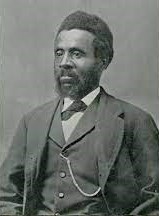 Since writing about Osborne for the April 21 issue of The Town Line, your writer has found that he was mentioned several times in the Waterville Mail, Waterville’s weekly newspaper from 1863 to 1906.

Three short articles appeared early in 1896. The first, in the Jan. 10 issue, read: “Sam Osborne of Colby University is wearing a Good Templars’ badge, a very pretty affair made of gold and handsomely engraved. Sam is very proud of it but doesn’t know whom he has to thank for it. All that he knows about it is that it came from a member of the class of ’92 at Colby.”

The second, in the Jan. 31 issue, announced that Osborne was about to get a uniform; he had already been measured for it. The writer commented, “This move, while it is a source of pleasure to all interested in the college, is only in keeping with the example set by other institutions of the kind, in this and in other states. Nearly all have their janitors in uniform.”

Two weeks later, Feb. 14, 1896, the Mail announced: “Janitor Sam Osborne of Colby University appeared this morning in his new uniform, and never looked more happy and contented. The uniform is of dark blue cloth trimmed with silver buttons The coat is a straight front sack, similar in style to the Pullman car porter’s coat. The head-gear is a square-topped, low cap with a straight visor, over which are the words ‘Janitor Colby Univ.’ in silver letters. Altogether it is a neat uniform and is admired by the faculty and students as much as by Sam himself.”

An article in the May 30, 1900, issue commemorated his 35 years as the janitor at Colby. The headline called him “Genial Sam Osborne,” and the writer said that, “Thirty-five years is a long time for a man to work for one concern and give entire satisfaction to all, but Sam has done that for Colby and has won besides, the esteem and regard of more Colby students probably than any one man living.”

After Osborne’s death, the July 6, 1904, issue of The Mail ran a two-column obituary prominently on the left side of the front page.