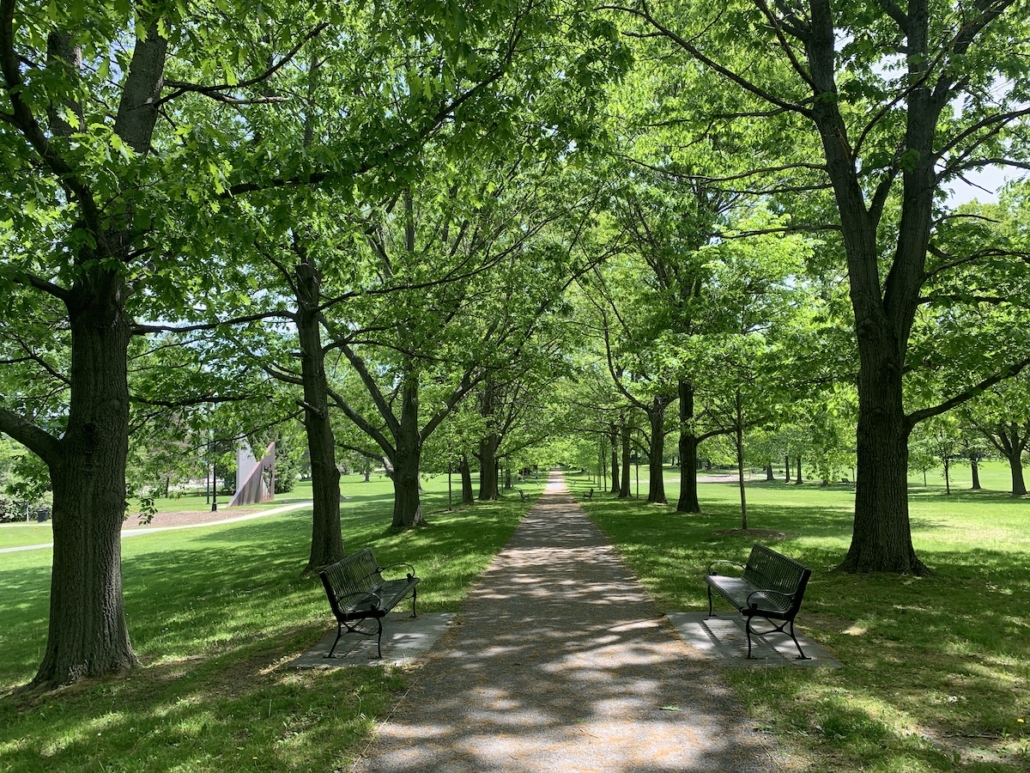 The Augusta historic district not yet discussed is the Capitol Complex Historic District, added to the National Register of Historic Places in 2001. This district includes several individually listed buildings: the State House, the Blaine House (official residence of Maine’s governors; see the Jan. 21 The Town Line) and the Gannett House, home of the First Amendment Museum (see the Nov. 12, 2020, The Town Line). Other buildings are the Burton Cross Office Building, the Nash School and several 19th-century residences that now house state offices.

Capitol Park, on the east side of State Street in front of the State House, has been listed individually as a historic property since 1989, and is in the Historic District.

After Maine separated from Massachusetts on March 15, 1820, the state capital was in Portland, the largest city. An on-line story by Don Carrigan, of News Center Maine, quotes historians Earle Shettleworth, Jr., and Herb Adams as they explain why and how Augusta succeeded Portland.

Portland had two disadvantages: it was not central, and would become less central as population expanded inland and north; and it was vulnerable to attack from the sea, important when residents still remembered the War of 1812 with Great Britain.

In 1822, Shettleworth said, the legislature established a committee to find a new capital site. Augusta and Hallowell both applied, as did Portland and two other coastal municipalities, Belfast and Wiscasset.

Augusta offered the current site, called Weston or Weston’s Hill; added the land running east to the Kennebec River for a park, for a total of about 34 acres; and offered to contribute toward expenses. After often fierce debates, the legislature voted on Feb. 24, 1827, to make the move, to be effective by Jan. 1, 1832, and on June 6, 1827, the state bought the land.

Legislators also gave Governor Enoch Lincoln and his Council $500 to improve the lot, including planting trees.

Despite the vote and the follow-up actions, the two historians said, every year until 1907 some legislator introduced a bill to return the capital to Portland. On Sept. 11, 1911, voters approved an amendment to the Maine Constitution stating that “Augusta is Hereby Declared to be the Seat of Government of This State.” The vote was 59,678 in favor to 41,294 opposed. The wording is now in Art. IX, Section 16, of the Constitution.

Capitol Park is the earliest of the historic district components. The park is a 20-acre rectangle bounded by State Street on the west, Union Street on the south, the Kennebec River on the east and Capitol Street on the north.

In October 1827 the Council chose General Joel Wellington to design a park plan. In a little over a month, he spent $373.13 of the $500 to create a path from State Street to the Kennebec River. The Maine Historic Preservation Commission’s 1989 application for national recognition (written by historian Shettleworth) describes an 80-foot-wide avenue, with two 30-foot-wide tree-bordered sidewalks.

By 1851, more trees and paths had been added. The Kennebec and Portland Railroad crossed the east end of the park along the river.

The park’s amenities disappeared during the Civil War. Shettleworth quotes a May 22, 1862, editorial in The Maine Farmer, an Augusta weekly newspaper, listing “tents and stables and barracks” spread through the park and its grounds used for “drills and evolutions.”

After the soldiers went south, the park was leased for farmland, a use The Maine Farmer writer hailed as much more useful than a military encampment. Shettleworth suggests patriotism as the motive.

By 1878, the park was again a park, similar to the 1850s version. In 1920, after James G. Blaine’s daughter donated the Blaine House as the governors’ house, Governor Carl Milliken had the Massachusetts-based Olmsted Brothers do a complete re-landscaping of the State House, the Blaine House and Capitol Park.

Portland landscape architect Carl Rust Parker was in charge of the project. His ambitious multi-year plan included adding three more tennis courts to the existing two; building a “rostrum” in the southwest as the center of an area for concerts and speeches; building a river overlook and nearby pools and a zoo to house Maine fish and land animals; and adding a Maine shrub garden in the northwest.

Shettleworth wrote that legislators were reluctant to appropriate funds for the changes. The fish pools and zoo were never built, and the tennis courts were removed by the 1960s.

The elm trees Parker carefully preserved died of Dutch Elm Disease and were replaced in 1983 with red oaks. The Vietnam War Memorial in the northwest was added in 1985.

The State House, designed by Boston architect Charles Bulfinch and deliberately imitating the Massachusetts State House, is the second early component of the Historic District. It, like Capitol Park, has a separate listing on the National Register of Historic Places, as of April 24, 1973.

The State House was deliberately sited on a high point on the northwest side of the lot donated by Augusta, rather than in the center. Its cornerstone was laid July 4, 1829. Kingsbury says dignitaries at the Masonic-led ceremony included President Andrew Jackson, Vice-President John C. Calhoun and Supreme Court Chief Justice John Marshall.

Construction was supervised by the Commissioner of State Buildings, William King, who had been Maine’s first Governor in 1820. The four-story building was near enough complete for the legislature to meet there January 4, 1832.

The State House is built of Hallowell granite. The original central section, with a cupola and two wings extending north and south, was 146 feet long by 50 feet wide, plus the 80-by-15-foot front portico with Doric columns, according to Richard D. Kelly, Jr.’s 1973 application for National Register of Historic Places listing (Kingsbury offers different dimensions). Wikipedia says it was supposed to cost $89,000; the final cost, including furnishing and landscaping, was $138,991.34, Kingsbury wrote.

As state government grew, the interior was changed in 1852 and 1860, and in 1891 a three-story wing was built on the west side. In addition to offices, it housed the state library, now in the separate Cultural Building with the state archives and museum. The Cultural Building, built in 1967-69, has been closed since late July 2020 for asbestos removal and upgrades to the heating, cooling and electrical systems.

The State House had major exterior remodeling in 1909 and 1910. The Bulfinch front and back and the rotunda were the only things left unchanged, as the building was made 300-feet long by extending the wings and the cupola was replaced by a 185-foot dome.

Wikipedia describes and illustrates the 2014 replacement of the dome’s 1910 copper sheathing (which had been expected to last 75 years). The work took from March to October 2014 and cost $1.2 million. The Minerva statue was regilded and repaired by EverGreene Architectural Arts, a New York City historic preservation firm.

Wikipedia says legislative leaders put a time capsule in the dome with “a book of Maine laws, a legislative handbook, the September 30 [2014] issue of the Kennebec Journal, some of the old copper, and personal items from the legislators.” The dome looks exactly the same since the restoration, except that it is now a copper-brown color instead of oxidized to green.

Kelly wrote that the Maine State House is architecturally significant as Bulfinch’s only known surviving work after he completed the Capitol in Washington in 1829 and came back to the Boston area. It is also significant as the only Bulfinch building for which his original plans are extant; they were found in the lining of a safe in the building in 1941, and as of 1973 were in the Maine State Archives.

The Burton M. Cross Office Building, a multi-story grey rectangular building west of the Capitol and connected to it by a tunnel, was originally the Maine State Office Building. It is steel-framed with a granite exterior.

Portland architects Miller and Beal designed the building in collaboration with a Boston firm. Construction started in June 1954 and was finished in the fall of 1956, historian Shettleworth wrote in his application for national recognition of the Capitol Complex Historic District, making it the youngest building in the District.

The Augusta State Facilities Master Plan, prepared by SMRT Architects and Engineers in August 2001, says the State Office Building was “state-of-the-art” when it was built, and might have been Maine’s biggest office building. In 2001, according to the SMRT website, the building was renovated, resulting in what the website describes as “a contemporary, open-office environment that supports growth in information technologies and telecommunications and leading-edge mechanical, HVAC and electrical and lighting systems to keep employees comfortable and healthy.”

Also part of the complex is the former Nash School, a two-story brick building at 103 Sewall Street, west of the main buildings, that the state bought in 1976.

According to Shettleworth, Augusta architect Arthur G. Wing designed the Nash School in the Romanesque Revival style; L. E. Bradstreet was the builder. On April 7, 1897, the city and the two men signed a contract for $8,973. The building was finished by September 1897.

About the designers of Capitol Park

Capitol Park designer General Joel Wellington was born in 1782 in Massachusetts and moved to Albion, Maine, early in the 19th century. The source of his military title is obscure; Ruby Crosby Wiggin found him listed as a captain in one of Albion’s companies in the War of 1812.

In 1814, Wellington was on the town committee to rebuild the bridge across the head of China Lake (then part of Albion). In October 1819 he was elected to the state convention that approved separating Maine from Massachusetts, and in the new state he represented Albion in the legislature. He was also a town selectman and Albion’s first postmaster, from March 1825 until 1831.

Around 1830, Wellington and George Pond co-founded the town of Monticello, originally called Wellington Township, on the north branch of the Meduxnekeag River, in Aroostook County. The Find a Grave website says Wellington built the road south to Houlton that is now Route 1, and eventually got repaid by the federal government.

Wellington died July 12, 1865, in Fort Fairfield, and is buried in the Village Cemetery, in Monticello. The website says Pond died the same day. It also says Wellington died at his son Albion’s home (and another website says Albion helped his father clear the land for their first log cabin); but on the same page, Find a Grave lists only four descendants: daughters Harriet and Clarissa (named after his wife, Clarissa Blake Wellington [1786-1868]) and sons James C. and George Blake.