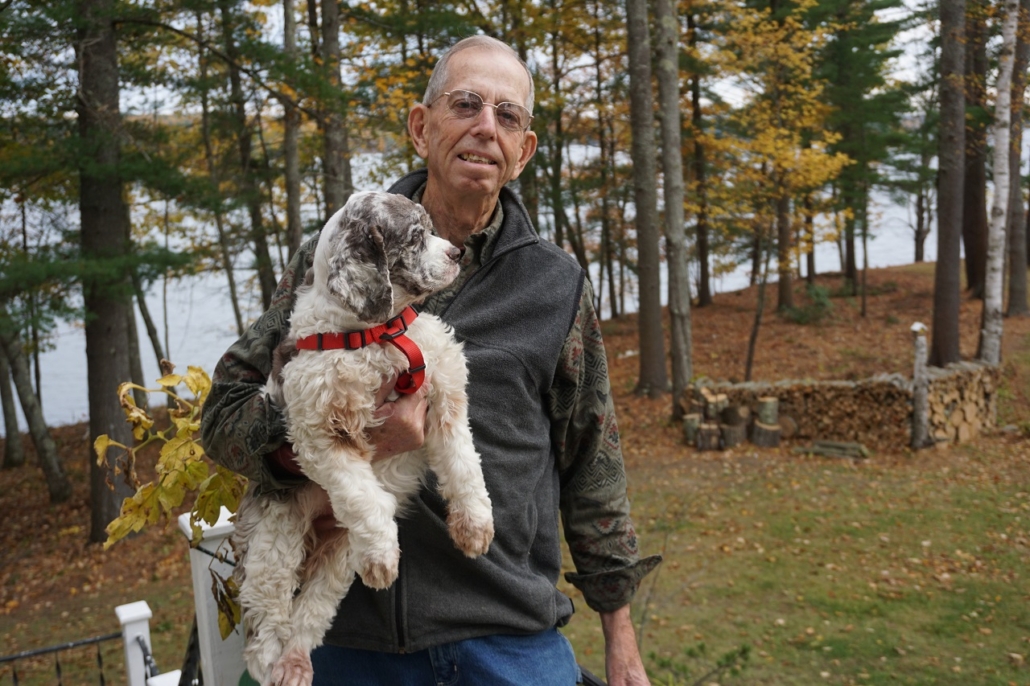 Clinton Hayward with his dog, Joy, at his home in South China on Three Mile Pond. (Photo by Eric Austin)

“The war was so unpopular, you couldn’t go anywhere in public in uniform,” says Vietnam veteran Clinton Hayward. “You would be berated, assaulted, threatened. It was frightening.”

We’re sitting in the living room of his home in South China, looking out over Three Mile Pond. He pauses a moment, leans forward and says, “To be honest about it, I hadn’t talked about my military experience with anybody at all until about a year ago.”

In 1966, after a duty tour in Vietnam of more than 12 months, Hayward, just 24 years old, returned to the United States. It wasn’t the welcome he expected.

“I flew into Boston,” he remembers, “and I had to take a bus to Calais to get home. I was still in uniform. I went into the bus station in Boston to get a bus to go to Calais, and everybody was swearing at me and cursing at me. It was the most humiliating” – he pauses, doesn’t finish. “And I had just come from a war zone the day before, thinking I had accomplished something important, that I had done something good.

“I never wore a uniform after that in public,” he says. “It was just too stressful.”

Born in Vanceboro, Maine, a tiny town on the Canadian border, Hayward grew up in nearby Calais and joined the U.S. Air Force right out of high school.

On his father’s side, Hayward came from a deeply military family, so joining the U.S. military was a no-brainer – although he admits he enlisted over the objections of his mother, who had hoped to see her son enroll in college instead. The year was 1961.

Hayward would find his first test the following year when, in the fall of 1962, newly-elected President John F. Kennedy informed the American public of a Soviet plan to install nuclear missiles on the island of Cuba, leading to a tense 13-day standoff that brought the United States to the brink of nuclear war.

Although the whole episode lasted less than two weeks, the standoff was intense, with U.S. military forces going to DEFCON 2 – the highest military alert ever given in the post-WWII era. Everyone prepared for all-out war against the Soviet Union. Hayward, just out of basic training, slept at his duty station with his fellow recruits, only taking short breaks to shower, grab some chow or a change of clothes.

Once the Cuban Missile Crisis had passed, Hayward settled into life on an American military base, first in Oklahoma, and then in Newfoundland and New Hampshire. He initially trained as a carpenter, although he later cross-trained in a number of specialties as he took night and evening classes in addition to his daily work on the base. Early on in his career he developed an aptitude for a particular skill called “packing and crating,” and it was this skill that he would be called on to employ in his first tour of duty in Vietnam.

It was now 1965, and the war in Vietnam was heating up. The U.S. Air Force sent Hayward to a naval and airbase being constructed at Cam Ranh Bay in western Vietnam, on the coast of the South China Sea. The location would become a significant strategic base for American forces. Given little more than 30-days’ notice, 23-year old Clinton Hayward left a new wife and a three month-old daughter with his parents and headed for Southeast Asia. 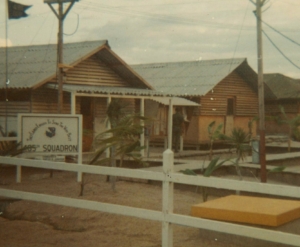 When Hayward arrived, the base was still under construction. “They had these giant inflatable buildings,” he recalls. “They had these big air compressors, and they would pump them up, and then if you’d lose power, they would just collapse on themselves.”

As Cam Ranh was a strategic air base, construction of runways was a top priority. “The runways at that time – most of them – weren’t even cement,” Hayward explains. Instead, they were formed of more than two million square feet of aluminum matting, manufactured in the U.S. and then shipped to Vietnam where they were snapped together like floor tiles.

Hayward worked out of a hangar on the edge of one of the runways. His job was to disassemble shot-up planes, “pack” those parts into “crates” and ship them back to the United States where they were repaired before being returned to Cam Ranh Bay and put to use once again.

“In order to do that kind of work,” says Hayward, “we had to work right on the flight line, so planes were coming and going right in front of the building where we worked.”

Coming and going…and crashing. Crashes were nearly a daily occurrence at Cam Ranh. “The ones that were coming back were usually shot up,” he says. “They were on fire, or crashing – trying to make a landing but the landing gear would be shot up, so there were aircraft crashes there almost every day.”

Hayward pauses, his eyes growing distant and for a moment I see that young man, only 23 years old, with a wife and young daughter back home in America, but with death a part of his daily experience in Vietnam. “Sometimes the pilots would be able to eject, and save themselves, but more often than not they would perish in those crashes,” he continues. “And I was seeing those crashes. That was pretty traumatic.” 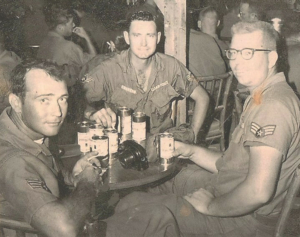 Something else sticks in his mind all these years later as well. “I grew up in a middle class family,” he tells me. “Not rich by any means – somewhat meager means, I guess – but I had never seen third world poverty [like that].”

His eyes take on a bit of that haunted look again. “These people in Vietnam – the natives – were such wonderful people, but they had nothing. And what little they did have, the war had destroyed.”

He remembers dinner time on the base. The military gave you plenty of food, he says, but it wasn’t very good food and many of the American soldiers did not eat everything on their plates. “After you ate, you would walk by a number of trash cans lined up outside the [mess] tent,” he recalls. “You would dump your food into those [cans], and there were dozens of small children lined up to dive into that food that you were dumping out of your tray into a trash can.”

The scene prompted the young Hayward to write an article about his experience and send it back home. He thinks it was published in the Bangor Daily News sometime in 1966. “That was the most striking image…it’s basically seared into my mind,” he says. “I still have – I wouldn’t say nightmares, but I still have dreams about going through that chow line and having kids fightin’ over the food I was dumping.” 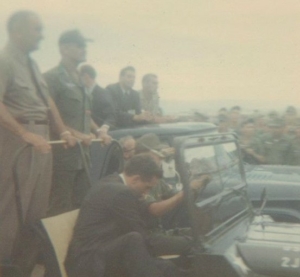 President Lyndon B. Johnson (top left) and General William Westmoreland visit the troops at Cam Ranh Bay for Christmas in 1965.

One of the positive highlights of Hayward’s time in Vietnam was when President Lyndon B. Johnson flew into Cam Ranh Bay with entertainer Bob Hope and General William Westmoreland, the commander of U.S. forces in Vietnam, during the Christmas of 1965.

Clinton Hayward finished up his service in Vietnam in October 1966. He likely would have stayed in the Air Force for life, but after only a few weeks at home, he was told he was being sent back to the war zone. “I had eight years in at that point,” he says. “I was prepared to be a lifer. I had just gotten back – 30 days, maybe? – and I was told I was going to be redeployed to Vietnam. It was the same month that my enlistment was up, so I just got out.”

Outside of his military experience, Hayward is most proud of his conservation work with the nonprofit organization Ducks Unlimited. “If it wasn’t for the work Ducks Unlimited does in North America,” he says, “there wouldn’t be any water fowl left.” Hayward has started Ducks Unlimited chapters all across Maine, including Calais, Machias, Waterville/Winslow, Farmington and in the Western Mountains region.

Although some of the time he spent in Vietnam was difficult, Hayward sees his military experience as immensely valuable and positive. “Going into the military was one of the most important things I ever did,” he tells me. “I am a strong advocate for military service, and I would encourage any young person, female or male, to do their part.”

Military service is a rewarding career The Vietnam War: I was there
Scroll to top