China voters have a two-sided local ballot to fill out Nov. 5: local elections on one side, local referendum questions on the other.

The fifth question asks if voters want to require a minimum 1,000-foot distance between the property line of any of the above, if approved, and a pre-existing public or private school.

The final question asks voters to choose between two possible three-hour extensions of town office hours: staying open until 7 p.m. Thursdays, or continuing to open from 8 to 11 a.m. Saturdays. A note says the question is advisory only and selectmen are not bound to implement either schedule.

There is a single contest on the election side of the ballot. Two selectmen’s terms are expiring, Irene Belanger’s and Robert MacFarland’s, and three residents have returned nomination papers, Belanger, Wayne Chadwick and Todd Tolhurst.

Ranked choice voting is not used in China’s 2019 local elections.

For the budget committee, Chairman Robert Batteese and District 1 representative Kevin Maroon are unopposed for reelection. There is no name on the ballot for the District 3 seat that Chadwick currently holds.

China polls will be open from 7 a.m. to 8 p.m. Tuesday, Nov. 5, in the portable building behind the town office. Residents may vote in advance, at the town office or elsewhere, until Oct. 31. After that date, state law says absentee ballots may be issued only if the voter is unexpectedly out of town the entire time the polls are open, has a physical disability or is confined to home or a “treatment facility” due to “incapacity or illness.”

Vassalboro selectmen discussed an unusually varied list of issues at their Oct. 17 meeting, postponing action on most of them.

Keltie Beaudoin attended the meeting with a proposal from Central Maine Power Company (CMP) to revise its easement allowing a power line to cross town property near the Webber Pond outlet dam. After she explained how CMP arrived at a proposed $10,000 payment to the town for the revision, selectmen, encouraged from the audience by former town manager Michael Vashon, counter-proposed $12,500. Beaudoin will present the counter-offer to her superiors.

Beaudoin explained that the new document will clearly state that the easement is 100 feet wide. CMP will keep it cleared; part of it goes through the boat landing parking lot, and she pointed out that neither the town nor the company wants trees in the parking lot.

When she said some existing trees “would probably go,” Town Manager Mary Sabins reminded her of limits on cutting trees in the shoreland zone. When she said CMP planned to replace existing poles with taller ones, Vashon pointed out the need to consider Charles Cabaniss’ nearby private airstrip.

CMP will pay for deeds and any other costs associated with the easement revision, Beaudoin said.

School Superintendent Alan Pfeiffer told selectmen the school year has started well, with an enrollment of 419 students, an increase of nine. He and school board members plan to work with the town’s new solar committee on possibilities of a shared solar project, and with the selectmen and budget committee as school board members begin developing a multi-year strategic plan.

Sabins said Gary Coull has resigned from Vassalboro’s Board of Appeals because he is moving out of town. Other board members are also ready to resign, she said. Any resident interested in joining the board is invited to contact the town office.

Selectmen had invited planning board members and a representative of the Central Maine Growth Council to the Oct. 17 meeting, but schedule conflicts changed the plan. Now, Sabins said, a Growth Council representative intends to come to the Nov. 12 planning board meeting (postponed from the usual first Tuesday of the month because of Election Day).

The manager announced that Police Chief Mark Brown and the Vassalboro Fire Department have received grants to buy most of the new radios they need and are looking for funding sources for the rest.

Selectmen made two decisions during the Oct. 17 meeting. After a very short public hearing that brought no comments, they approved amendments to the General Assistance Ordinance appendices, adjusting aid levels. And they approved a catering permit for Robert Laster, doing business as Crostini’s Catering, in Winthrop, for an Oct. 26 retirement dinner at St. Bridget’s Center, in North Vassalboro.

The next regular Vassalboro selectmen’s meeting would have fallen on Halloween. It has been rescheduled two days earlier, for 6:30 p.m. Tuesday, Oct. 29. 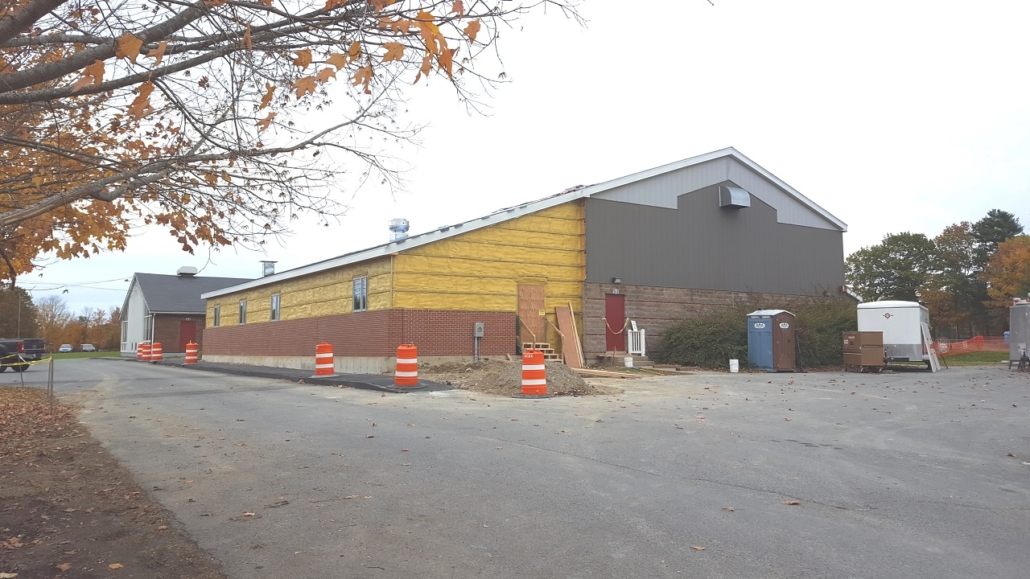 Construction continues on the addition to the China Middle School as masons have begun to apply the brick work on the outside of the building. Work remains on schedule. The $1.5 million project will add storage for cafeteria tables, redoing the gym floor and upgrading the HVAC system, along with repairing the roof and other fire code improvements to meet compliance of new laws. (Photo by Roland D. Hallee)

To submit a photo for this section, please visit our contact page or email us at townline@fairpoint.net! 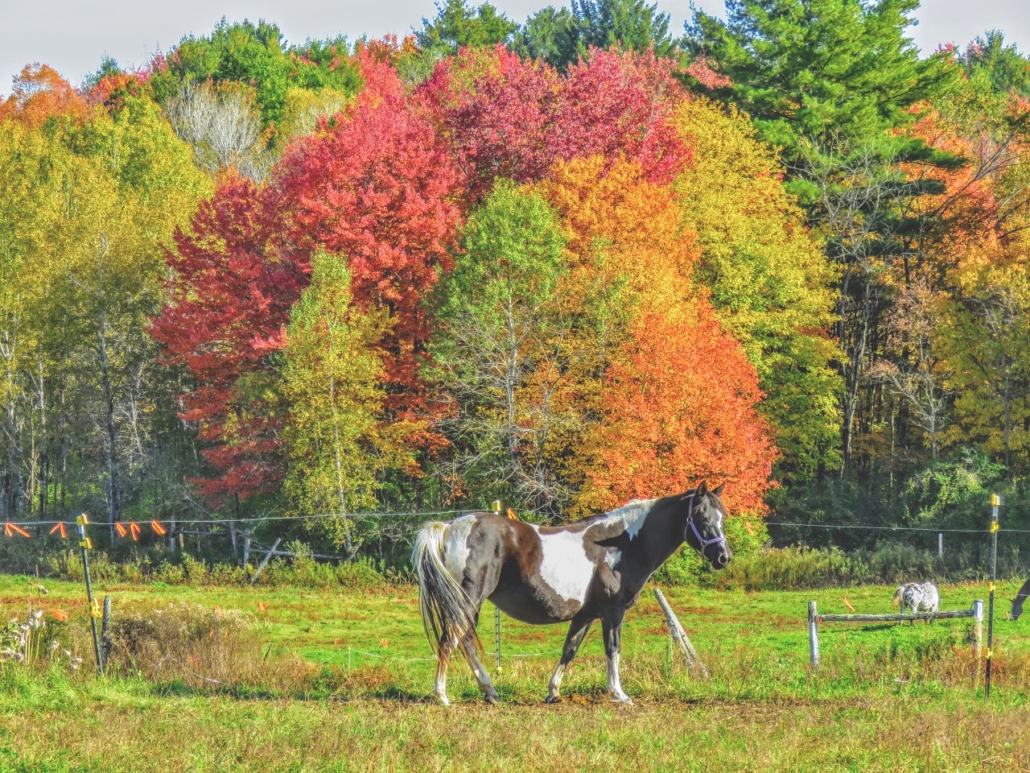 PICTURESQUE: Tina Richard, of Clinton, captured this horse posing in front of some beautiful fall colors. 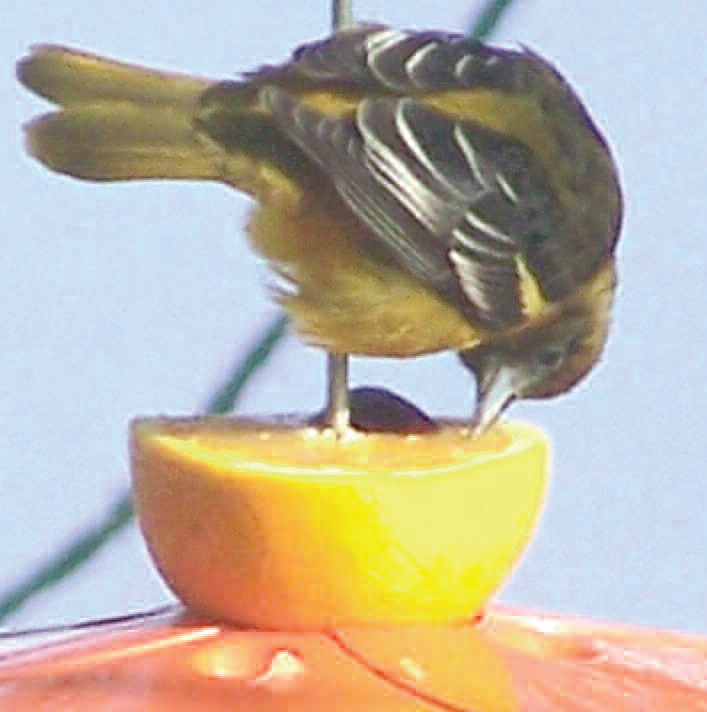 HMMMM!: Michael Bilinsky, of China Village, photographed this bird enjoying some orange nectar in his backyard. 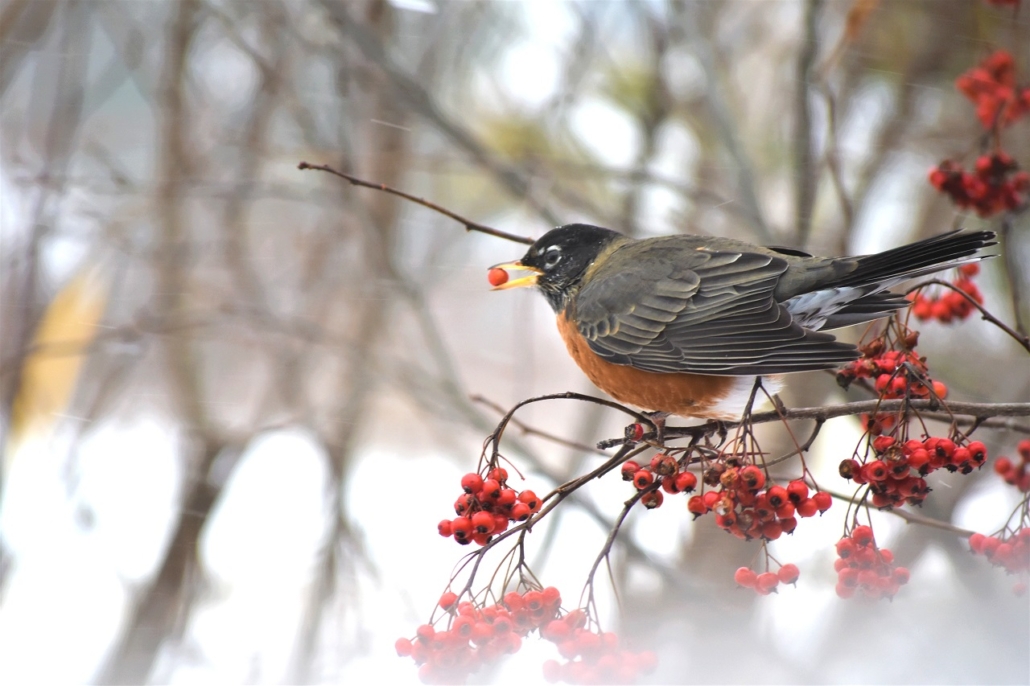 ONE AT A TIME: Joan Chaffee, of Clinton, snapped this robin enjoying some berries from her Hawthorne tree. 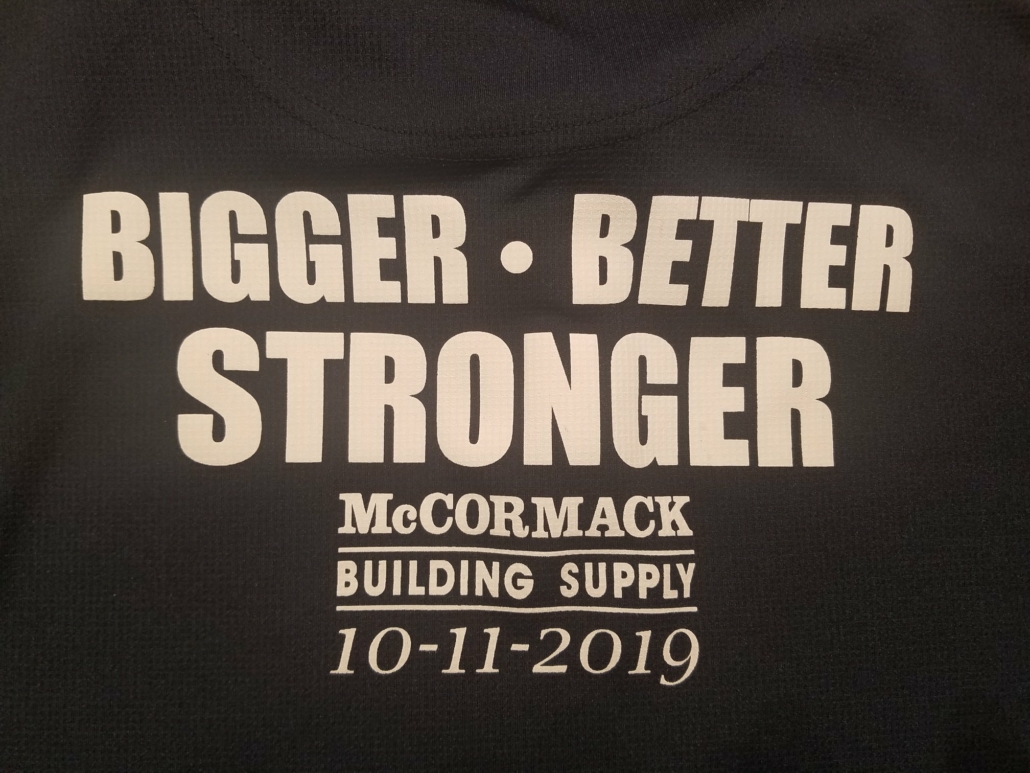 Winslow Congregational Church will host a delectable take-out soup-and-bread lunch to raise money for McCormack’s Building Supply employees impacted by the recent devastating fire. The take-out lunch will be held at the church, located at 12 Lithgow Street, in Winslow, from 11 a.m. to 1 p.m. on Saturday, October 26. Cost of your take-out soup-and-bread lunch is just $5, with all proceeds going directly to McCormack’s employees, to help them address financial challenges brought on by the fire. 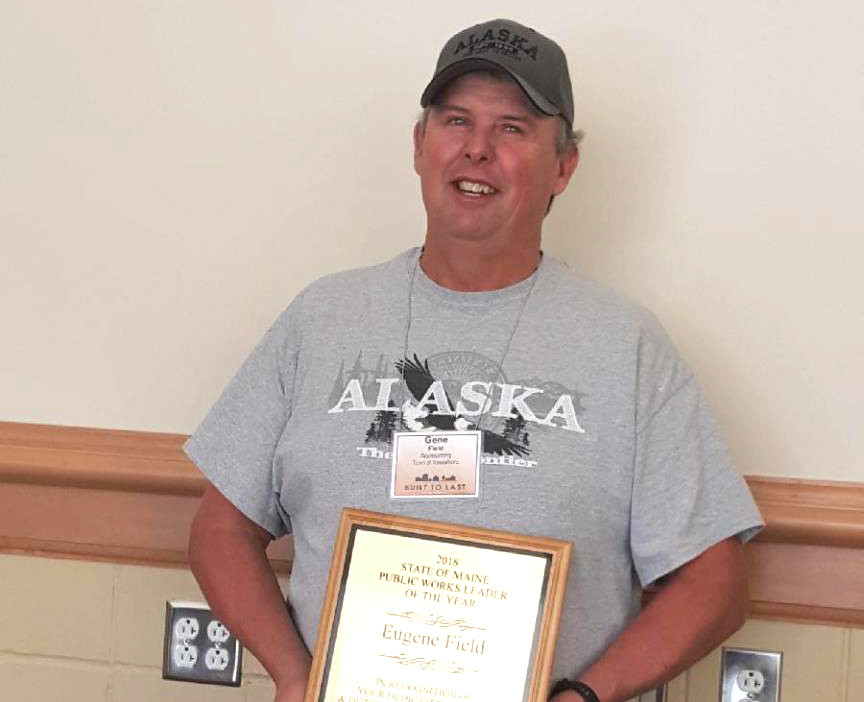 At the October 3 meeting of the Maine Chapter of the American Public Works Association, in Bangor, at the Maine Municipal Association Convention, Vassalboro Public Works Director Eugene Field was presented with the 2018 Public Works Leader of the Year Award. Gene was chosen after nomination by the Vassalboro Selectmen and the Town Manager for his nearly 40 years of dedicated and commendable service to the residents of the town of Vassalboro. 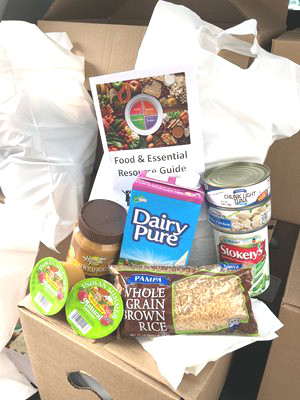 Northern Light Inland Hospital is responding to the problem with an innovative solution to ensure access to food banks for patients who do not have dependable transportation.

Nearly one in six households in Kennebec County lacks enough food to maintain healthy, active lifestyles for all household members. Nutritious food is available, yet many families can’t access the food because they don’t have transportation to a food bank. Northern Light Inland Hospital is responding to the problem with an innovative solution to ensure access to food banks for patients who do not have de­pendable transportation.

Inland Hospital providers and staff routinely screen patients for food insecurity, and patients whop have immediate needs are offered emergency food bags on the spot. If transportation to the food bank is also found to be an issue, the provider can refer the patient for transportation assistance. The hospital explored many different solutions to the problem and found that arranging a taxi ride would help the largest number of food insecurity patients get access to the food they need.

“One of the biggest struggles is getting people to the food, and food to the people,” says Bridgette Gemelli, community health navigator, Northern Light Inland Hospital. “Some people can welk to the food bank but can only carry so much back to their homes.”

In her role as community health navigator, Bridgette considers each person’s unique needs and helps them find solutions to a range of issues that affect quality of life. Her work often includes providing education about and connections with resources available in the community and strategies to help patients overcome barriers.

“You can’t recover from illness or live your healthiest possible life if you aren’t getting the proper nutrition,” says Crystal Richard, director, women’s health at Northern Light Inland Hospital. “In order to improve overall health and wellness, we need to get to the root of the problem, which is sometimes transportation.”

Inland Hospital’s approach to addressing food insecurity for its patients may serve as a model for other hospitals to follow. The initiative, funded through spring 2020, augments Inland’s ongoing work with several community organizations to address the most significant problems that affect health for the people of Kennebec County.

Identify the people in these three photos, and tell us what they have in common. You could win a $10 gift certificate to Retail Therapy boutique, 11 KMD Plaza, Kennedy Memorial Dr., Waterville, next to the Dairy Queen!* Email your answer to townline@fairpoint.net or through our Contact page with subject line “COMMON GROUND 10.”

Please include your name and address with your answer, so we can mail your prize if you are the winner!

* Should there be more than one correct answer, a random drawing will be held to determine the winner. 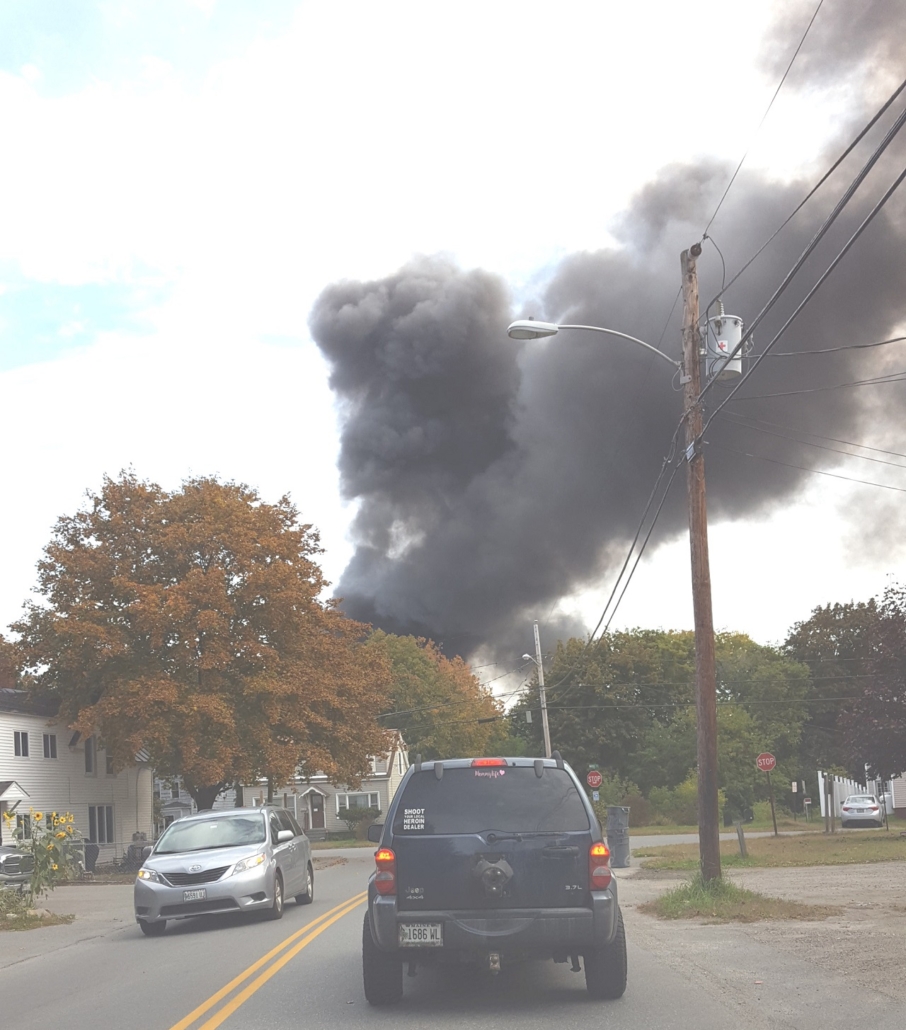 Smoke can be seen billowing from Winslow’s McCormack Building Supply, on Lithgow, from the Waterville side of the river, on October 11. The state fire marshal’s office has concluded that the cause of the fire to be undetermined. Accord­ing to Steve McCausland, spokesman for the Maine Department of Public Safety, fire investigators said the fire started near a building in the back of the complex, known as the pine shed, where white pine lumber was stored.

The monetary loss from the fire will exceed $4 million. Investigators interviewed about 25 people who were in or near the buildings when the fire broke out about noon on Friday. Those interviewed included employees, customers, and employees of a paving company which was paving on the property. Investigators said they could not rule in or out any one source for the fire because of the extensive damage.