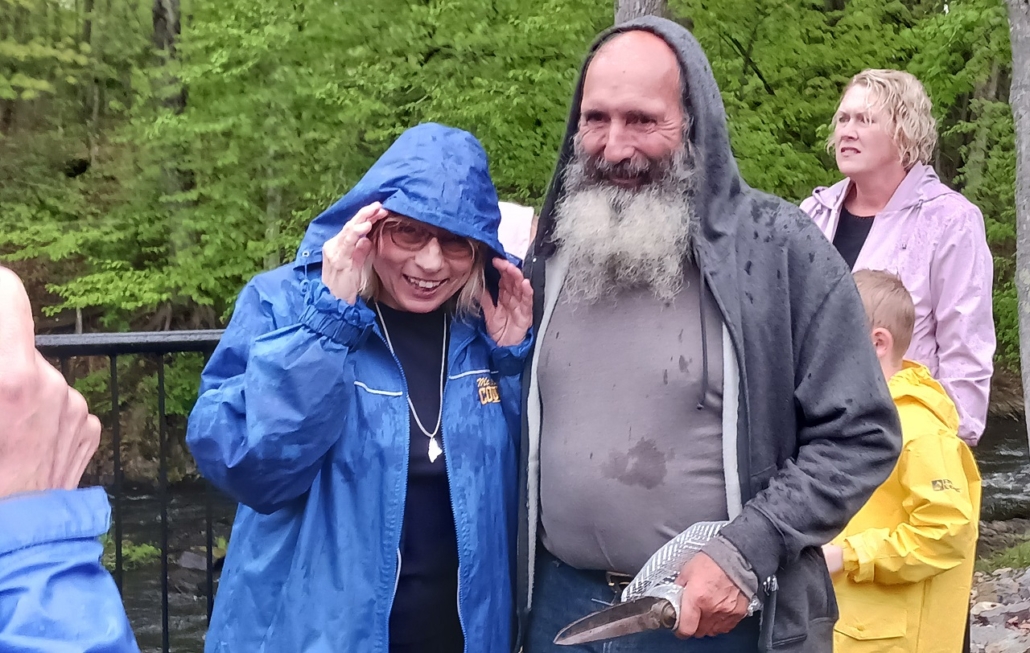 It was drizzling lightly on Thursday, May 19, at the Box Mill Dam, in Vassalboro, as a good-sized crowd gathered behind the Olde Mill Place to witness a ribbon-cutting ceremony celebrating the completion of the Alewife Restoration Initiative’s project to bring migratory fish back to China Lake.

Over the course of two centuries, numerous dams were constructed along Outlet Stream to power a growing paper and textile industry in central Maine. Although built to generate power, those dams had the unintended effect of blocking migratory fish passage into and out of China Lake, principally river herring, also known as alewives. This had a significant impact on the local ecology throughout the watershed. As the years passed and companies moved operations from hydro to electric power, these dams were abandoned, but their environmental impact remained.

The Alewife Restoration Initiative was a cooperative effort formed to solve this problem, involving the towns of China, Vassalboro and Benton, local organizations like the China Lake Association, China Region Lakes Alliance, and the Sabasticook Regional Land Trust, with support from the U.S. Fish and Wildlife Service and the Maine Department of Marine Resources. It was led by the Yarmouth-based nonprofit Maine Rivers.

The project has worked the past seven years to remove dams or install fishways at six locations along Outlet Stream. Lombard, Masse and Morneau dams were dismantled, while fishways were installed at the head of Outlet Stream (behind the Vassalboro Historical Society) and at Ladd and Box Mill dams. It was one of the most ambitious projects of its kind in New England.

A special emphasis during the speeches was placed on the efforts of the many organizations and individuals who contributed to the project, including, aside from those already mentioned, local land owners who worked closely with the ARI team, especially the Cates family, owners of the property adjacent to the head of Outlet Stream, and Ray Breton, owner of the Olde Mill Place where Box Mill Dam is located. Nate Gray, a Vassalboro resident and scientist for the Maine Department of Marine Resources, and Matt Streeter, project manager for Maine Rivers, were among those also singled out for their essential contributions to the project. 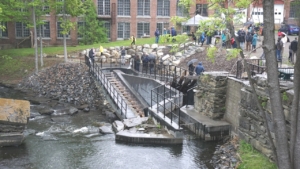 The new fish ladder at the Box Dam that will allow alewives to migrate naturally toward China Lake. (photo by Eric W. Austin)

Ahead of the event, I caught up with Landis Hudson, Maine Rivers’ Executive Director, who said the next few weeks will be the best time to come and watch the alewife runs. The fishways at the Box Mill and Ladd dams were specifically designed for visitors to observe the migratory fish passage. Box Mill Dam, in particular, is a popular spot with a small park for local residents to visit and enjoy the ambiance.

Nate Gray told me they have counted around 500,000 fish that have passed up the fishway at the head of Outlet Stream so far this season. He expects China Lake will support a population of about one million alewives each year.

“I’m just here to cut a ribbon,” said Governor Mills, closing out the ceremony. “I know these fish have been waiting 200 years to get up to China Lake and we’re not going to delay them any further. A million alewives: welcome home!”