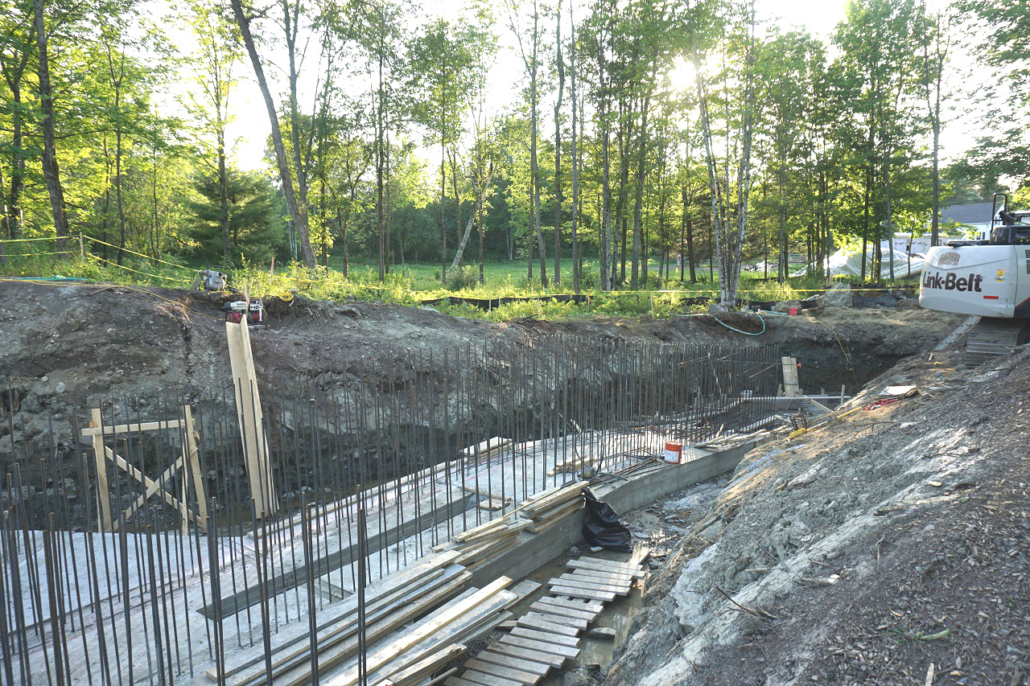 For more than five years, a group of dedicated people have been working to re-open Maine waterways to the state’s native migratory fish population. The obstacles have been fierce, but the rewards promise to be well worth the effort. Clearer water in our lakes and ponds, an enhanced food web and improved habitat along our rivers and streams are just a few of the benefits proponents of the project expect to see. 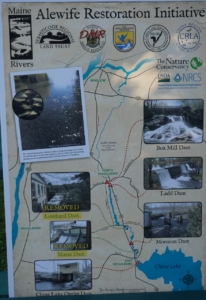 Map of the dams along Outlet Stream. (Click to enlarge.)

As European settlers spread into central Maine in the 1700s, they found a lush landscape: forests filled with wildlife and lakes teeming with fish. They also saw untapped potential in Maine’s many rushing rivers and flowing streams. Dams popped up everywhere as settlers sought to harness the region’s hydropower to grind their grain and drive their saw mills. No less than six dams were built along Outlet Stream, in Vassalboro alone.

Dams are basically good for one thing: preventing water from flowing. They also, unintentionally, prevent fish from traveling upstream. Migratory species like river herring (alewives and blueback herring), sea lamprey, shad and salmon, which spend much of their lives at sea but return to fresh waters to spawn, were – pardon the pun ­– left high and dry by the dam construction.

These obstructions along Maine’s rivers had a particular impact on alewives which – unlike their cousins, the blueback herring, that spawn in the rocky beds of freshwater streams and rivers – prefer to lay their eggs in the muddy bottoms of our lakes and ponds. Alewives were already faced with the daunting task of navigating up Maine’s rivers and through the maze of Maine’s many streams before finally reaching the calm and safety of interior lakes. With the additional obstacles posed by man-made dams built along Maine’s streams and rivers, migratory fish populations virtually disappeared from many of our lakes. Alewives, which had been so plentiful in our ponds and lakes before the arrival of European settlers, dwindled to almost nothing by the 20th century. 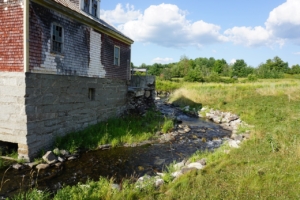 The site of Masse Dam, which was removed a year ago. (photo by Eric W. Austin)

Alewives in particular offer an ecological benefit to Maine lakes that was lost when they disappeared. These migratory fish feed on the phosphorous-rich plankton that also serve as a nutrient for the blue-green algae (cyanobacteria) that is currently such a problem in our lakes. The alewives carry the phosphates they consume back to the ocean, depriving the algae of this essential nutrient and curbing its growth.

Most of this phosphorous enters the lake as runoff from melting snow and summer rains. When soil around the lake is disturbed, such as during construction for rural development, it brings more of these nutrients to the surface, which then are carried into the lake by the rains or melting snow. As the population around Maine’s lakes grew and development along the shoreline increased, more phosphorous-rich soil was disturbed and those nutrients were carried as runoff into nearby bodies of water.

Unfortunately, the very creatures that could have helped balance the increased phosphorous were stuck – quite literally – out at sea. The algae and cyanobacteria in the lake had no such problem, however, and as a result they began to multiply and spread like crazy. Lakes, once beautifully blue, began to turn green.

The China Lake Alewife Restoration Initiative aims to reclaim this balance by restoring alewife passage back to China Lake. The project is headed up by the nonprofit organization Maine Rivers, in collaboration with the towns of China and Vassalboro, the Maine Department of Marine Resources, the Kennebec Water District, the Sebasticook Regional Land Trust, and the China Region Lakes Alliance.

Much of the early groundwork for the project was laid down by the China Region Lakes Alliance, which was founded in 1995 by residents of China, Vassalboro and Windsor, along with the Kennebec Water District, to address water quality and erosion concerns around China Lake, Three Mile Pond, Webber Pond and Three Cornered Pond. 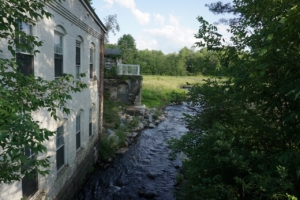 Lombard Dam was one of those removed by the Maine Rivers team. (photo by Eric W. Austin)

Of the six dams along Outlet Stream which were blocking fish passage from Sebasticook River, two have been completely removed, Lombard and Masse dams. Fishways are planned for three others, Outlet, Box Mill and Ladd dams. Morneau Dam will be the final one tackled by the team, scheduled for the summer of 2022, although at this point they haven’t decided whether a fishway or a complete removal is more appropriate for the location.

Currently, the team is constructing a fishway at Ladd Dam in Vassalboro, which they hope to complete no later than September 30. The fishway is based on a design first proposed in 1909 by the Belgian scientist G. Denil.

“The channel will be four feet wide,” says Matt Streeter, project manager for Maine Rivers and the Alewife Restoration Initiative. Removable barriers, called baffles, will be placed along the fishway to help control the flow of water and give the fish a place to rest as they fight the rushing current. Grating will also be installed over the fishway – extending a few inches above ground level – to allow observation of the fish migration, but prevent anyone from falling into the racing water.

“The key thing that will attract fish into [the fishway] will be its location,” Streeter explains. “It’s gotta be in the vicinity of one of the major currents in the stream – and you really should have more water coming out of your fishway than going anywhere else, because it’s got to be the most attractive stream for them to follow up. They’re basically looking for the deepest, swiftest, largest volume of water.”

A fishway was installed a decade ago on Webber Pond at the outlet to Seven Mile Brook in order to allow alewives to re-enter the pond (although alewives have been stocked in Webber Pond and China Lake by the Maine Department of Marine Resources since 1997).

“[Water quality] is much, much better than it was before the alewives,” says Frank Richards, president of the Webber Pond Association, in Vassalboro. “It’s not perfect. The alewives are not a panacea, but the [algae] blooms are just a fraction of how intense they used to be. Before the alewives, there would be a green, gelatinous, slime-mess starting in late June and lasting until mid-September. With the alewives, we have clear water for most of the summer.”

Richards warns that opening up passage for alewives into the lake will not solve all the problems associated with an overabundance of nutrients in the water. On Webber Pond, there is still usually one algae bloom each summer. “There’s almost always at least one bloom,” he says, “and it’s very rare – even with the alewives – not to have a bloom that qualifies as a ‘severe bloom,’ meaning a [water visibility] reading of two meters or less. So, the alewives have not completely eliminated blooms, but the intensity isn’t even remotely comparable to what it was before the alewives were introduced.” 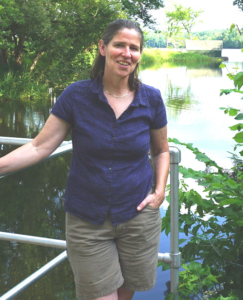 There has been some concern that alewives dumped into China Lake might become ‘landlocked’ and unable to return to the ocean. If this happens, any phosphorous reduction they provide could be outweighed by the nutrients reintroduced at their deaths. Generally, this does not seem to be a problem in either Webber Pond or China Lake, as they are able to leave the lake with water as it is released through the dam’s control gates, but the Alewife Restoration team aims to prevent any alewives from becoming landlocked by including, along with the fishways, renovations to the dams which will provide an ‘alewife outlet’ designed specifically to facilitate their return downstream. The real problem is that the dams prevent the alewives from returning to the lake once it’s time to spawn, so populations can only be maintained by continually restocking the lake from other sources.

The completion of the fishway at Ladd Dam in Vassalboro will be a major milestone for the Alewife Restoration team, but there is still much work to do. Additional fishways need to be constructed at Box Mill Dam (behind the Olde Mill Place) and at the dam where Outlet Stream flows out of China Lake.

Maine Rivers is actively working to plan the renovations with the community in mind. “We have fairly detailed plans for the fishway that will go here [at Outlet Dam],” says Hudson, “but I’m interested in exploring the idea of making this a more holistic planning and design process to figure out what people in town want and try to make that happen.” One idea is to build a bridge which would serve as a place for visitors to observe the fish migrations.

By the spring of 2023, alewives will be returning to China Lake under their own power for the first time in nearly 200 years.