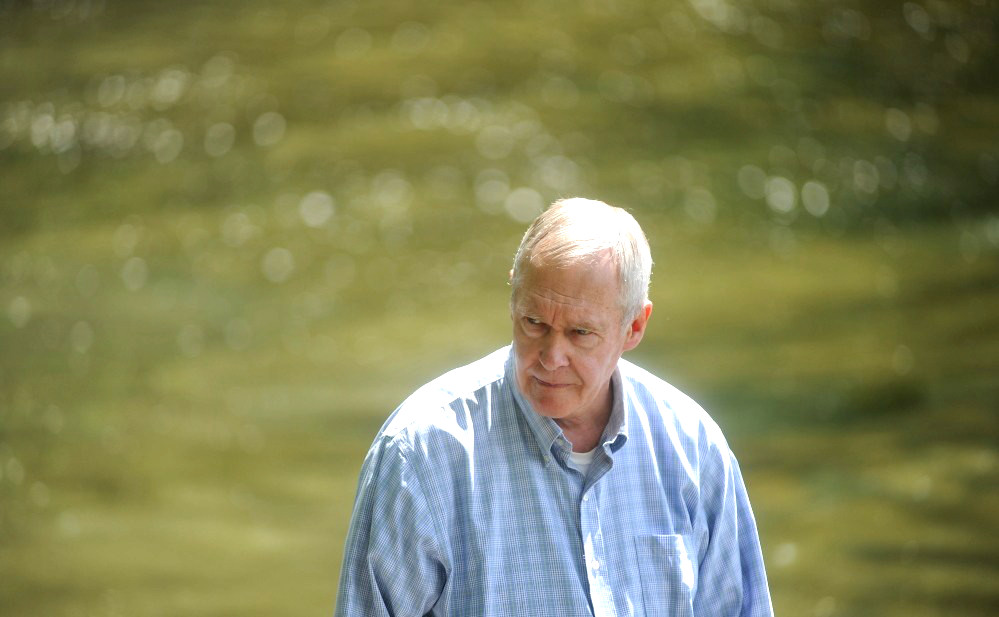 Frank Richards, of Vassalboro, has been president of the Webber Pond Association for 20 years.

This year’s edition of the Webber Pond Association annual meeting took on the feel of meetings from the past. Where in recent years they have been somewhat quiet, especially in regards to the lake drawdown, this year’s version produced additional controversy, with much discussion about the drawdown, and questions about proxy voting and voting restrictions.

Many different views were presented in regards to the drawdown date. In their June meeting, the board of directors had recommended Monday, September 16, as the proposed date. The third Monday in September has been the norm for the last five years or so. The directors came to that conclusion by trying to determine a date that would pass on the first vote.

However, this year, there were other dates mentioned at the annual meeting, mainly October 28 and November 30. The two latter dates never came up for a vote as the September 16 date passed, 33-29, a far closer vote than in years past. Over the last 10 – 12 years, votes in favor of the third Monday have been more one-sided, with few dissenters.

The common thought for the September 16 drawdown was that it has “been beneficial” to lower the water level in September as opposed to later in the year, even though DEP recommendations are for a mid-August drawdown. Association Vice President Charles Backenstose, a strong proponent for early drawdown, said that the September date is a compromise that is still useful at exporting phosphorus, while enabling people to use the lake longer. “Who wants to pull boards [at the dam] in July?” he asked.

Association President Frank Richards noted that the November 30 date coincides with the end of duck season. “I don’t think we’ll get any more water quality benefit by setting the winter level on October 28. There’s just no reason to not wait until November 30, if the membership favors a later draw down.”

Attendees at the meeting also brought up the possibility of implementing proxy voting for members unable to attend the meeting because of work, or other, commitment. Discussion on this topic drew the most heated exchange of the meeting, with some in attendance insisting that the by-laws provided for them to present the question to the membership for a vote at this year’s meeting. It was moved and approved to put the question on the agenda for the 2020 meeting.

Also, a motion to change the by-laws to restrict voting rights to lake property owners only was ruled out of order by Richards. It was the president’s opinion it was too big a change to be put on the agenda without any prior notice. A motion was made to overturn Richards’ ruling, but was defeated, although 16 people did vote to support the motion.

It also was moved and approved to place the voting membership question on the 2020 agenda.

In other business, Bob Nadeau, Webber Pond Association’s representative on the China Region Lakes Alliance, reported that the reason that more shoreline work is being done on China Lake than Webber Pond and Three Mile Pond is because of the fact that China provides significantly more funding to the CRLA than do the other two lakes. Both Webber and Three Mile ponds are located in Vassalboro.

“Alewives continue to be a much-discussed topic as a water quality management tool and as a restoration effort,” said Nadeau. “There is no doubt that the water quality has improved since their introduction into both Webber and Three Mile ponds.”

Nadeau also noted that, as of his knowledge, there are no invasive plants in Webber Pond. The Webber Pond Association voted to give $1,000 to CRLA. In total, according to Nadeau, it costs about $6,000 a year to provide boat inspectors at the three lakes.

In his vice president’s report, Backenstose said the water clarity in the pond has doubled over the last three weeks, to 3.7 meters (approx. 9-1/2 feet), an improvement from less than two meters on July 13. He also has seen no collection of the scum that accumulates when a severe algae bloom is present.

Backenstose has taken Secchi disk readings on the pond for the last 15 years. He also takes phosphorus samples that are analyzed at the state level. There is no data available for Secchi disk readings in October or November, as Backenstose, a Pennsylvania resident, returns home in September and is not available to produce readings for those months, which have increasingly become part of the discussion as far as the annual drawdown is concerned. A member of the audience volunteered to take those readings in order to be able to build a data base for those two months in regards to water clarity. The offer was enthusiastically accepted by Richards.

In his president’s report, Richards said, “Webber is on track to have a really good summer with respect to keeping the lake at a good level.” They have been able to keep levels at the spillway despite several years of drought conditions. 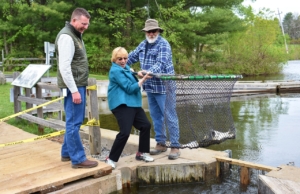 Gov. Janet Mills, left, tries to lift a net full of alewives during the May run. Phil Innes, a Webber Pond Association director, helps the governor. (photo by Jeff Nichols)

The association has been using a management plan for Webber Pond that was drafted in 1990 by the Maine Department of Environmental Protection. That plan is in the process of being updated and will be posted on the Facebook page as soon as it is available, according to Richards.

From a question posed by Richards, no one in attendance has caught, nor heard of anyone else on the lake having caught, a northern pike. A good sign.

Richards also noted that in May, Gov. Janet Mills visited the fish ladder at the Webber Pond dam. It marked the first time a Maine governor had ever visited a fish ladder anywhere in the state of Maine. Another landmark appearance was the presence of the directors of the Department of Marine Resources and Maine Department of Inland Fisheries and Wildlife to the Vassalboro dam.