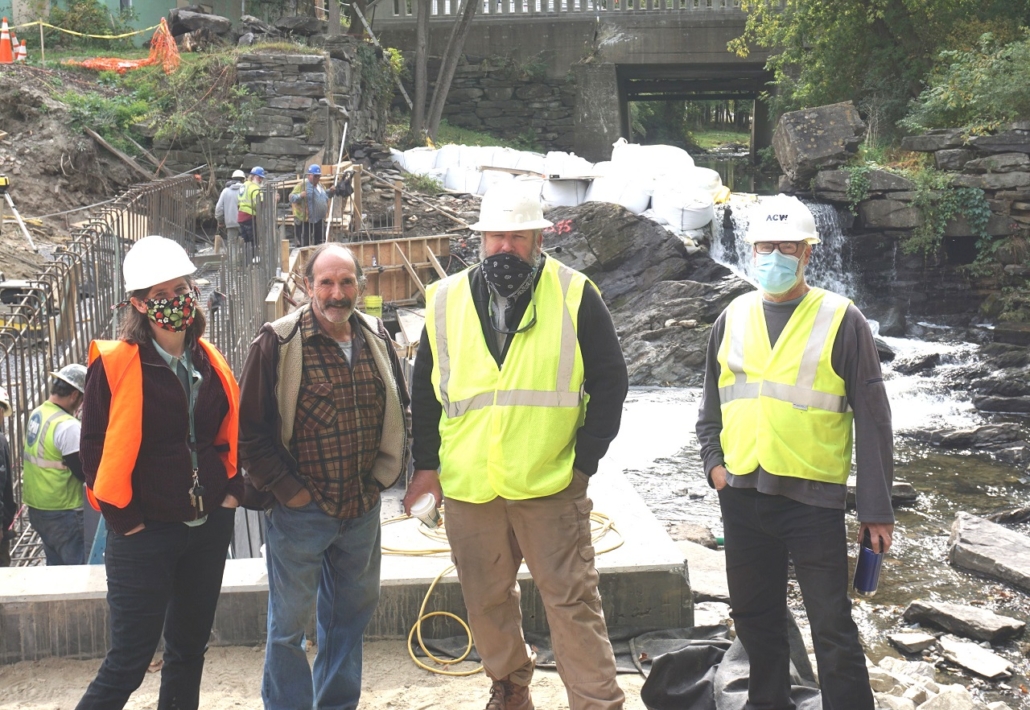 Six dams in six years — that was the goal, says Matt Streeter, project manager for the China Lake Alewife Restoration Initiative, and it’s a goal they are likely to meet — and maybe even surpass.

The team invited me down to Box Mill Dam, behind the Olde Mill, in Vassalboro, to view their progress on the new fishway currently under construction. Once complete, it will be another milestone on the way to opening up migratory fish passage into China Lake for the first time in nearly two centuries.

It’s been a long haul for the project team, which is headed up by the nonprofit Maine Rivers, working in collaboration with the towns of China and Vassalboro, the Maine Department of Marine Resources, the Kennebec Water District, the Sabasticook Regional Land Trust and the China Region Lakes Alliance.

“It takes a lot of work,” says Landis Hudson, executive director for Maine Rivers. “We have created a big, solid team to work on this project, and we have been in communication for six years to get this far, but it’s taken a strong team and a clear vision of the future. We’re not done yet, but we can see the finish line.”

Originally, there were six dams along Outlet Stream blocking fish passage into China Lake. Depending on what was appropriate for the location, the group has either dismantled the dam or built a fishway to allow migratory fish a means around the obstacle. Last year, they completed a fishway at Ladd Dam, in Vassalboro. In the years prior, they dismantled Lombard and Masse dams. This year they are building a fishway at Box Mill Dam, which leaves just Morneau Dam and the dam at the head of Outlet Stream (behind the Vassalboro Historical Society) to finish.

Although alewives have been annually stocked in China Lake for years, the team’s work will dramatically increase the lake’s migratory fish population.

“The population is going to go up significantly,” explains Nate Gray, of the Maine Department of Marine Resources. Gray has been responsible for stocking alewives in China Lake since the beginning, starting in 1997. “We stock about 25,0000 [adult alewives] a year,” he says, “[but] we know China Lake is good for about a million fish.”

Construction of a fishway continues at the Box Mill Dam, in North Vassalboro. (photo by Eric W. Austin)

Maine Rivers executive director, Landis Hudson, elaborates: “It’s great that DMR has been jump-starting the system by putting those fish in,” she says, “but the idea is to let the system do its own thing — [to] have a self-sustaining population that can make their way, essentially, from the ocean up to China Lake on their own volition.

“What we’re doing is bringing a big burst of native species back in that will – obviously – be good for the stream,” continues Hudson, “but it will also have an echo effect throughout this system and then further out into the Gulf of Maine. So, it will strengthen the food web for fish, birds, and other animals.”

Some people have questioned why these dams have not been repurposed to generate electrical power, but Hudson says that idea isn’t practical. “Sometimes people have this idea that every single dam in the state could be producing hydropower,” she says, “[but] none of the dams along Outlet Stream are particularly viable now. They were used for gristmills; they were used for saw mills — old-fashioned power. Those times are gone. So, we’ve been basically working with what’s here, trying to fix the stream and make it less ‘broken’ — bringing back the fish — but the idea of some imaginary hydropower project is not viable anymore.”

The Alewife Restoration Initiative has worked with local landowners to accomplish their goals. Ray Breton, owner of the Olde Mill property, has collaborated closely with the team to ensure the current fishway at Box Mill – and last year’s Ladd Dam fishway – were built without sacrificing the natural beauty of the environment.

“It’s been great,” says Breton. “I had some recommendations, in order to add to the park, so this all blends in and looks like Mother Nature. They were good to work with. They could have said, ‘No,’ but they didn’t. Everything I’ve asked for they put in.”

Hudson agrees. “People come here for weddings, or to have their high school pictures taken,” she says, referring to the current project at Box Mill, “so we’ve tried to make plans which integrate that into it, and [keep] the aesthetics of the waterfall. It’s not just fish passage. It’s fish passage and a park.”

Project manager Matt Streeter adds, “This is going to be the place where we are going to encourage people to come look at the fish run in the stream. There’s going to be a nice brick walkway all the way around it, and safety railings, so people will have a good view of the fishway.”

The team is aiming to complete construction at Box Mill by October. Next year, they will tackle Morneau Dam or Outlet Dam — or maybe both. It all depends on the funding.