Submitted by Lynda Pound, member of the Sheepscot Lake Association. 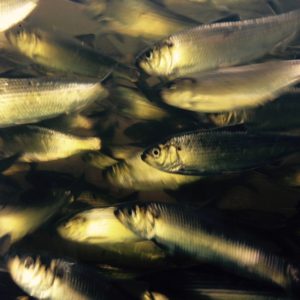 Although a major snow storm was bearing down on Palermo, over a hundred town residents assembled in Augusta for a hearing on the bill L.D. 922 on February 7, before the Marine Resources Committee, in Augusta. This bill proposed that Marine Resources would take control of the dam on Sheepscot Lake from the Maine Department of Inland Fish and Wildlife in order to open the fishway to migratory fishes during the spawning season from April 15 to June 30. The fishes that would come up through the fishway would be alewives (to be used as bait fish for the lobster industry), Sea Lamprey, and American Eels. According the Andy Goode, of the Atlantic Salmon Federation, there would be no Salmon.

Testifying before the Marine Resources Committee were members of the Sheepscot Lake Association, a representative from the Palermo Select Board, many concerned citizens of Palermo, legislators and residents of Long Pond, and other concerned Maine citizens….most all in opposition to this bill.

The Sheepscot Lake Association and Palermo residents wanted legislators to know that they are profoundly against this opening for multiple reasons. These include threatened biosecurity of the fish rearing station from alewives entering the lake during spawning season, damage to the valuable self sustaining wild togue (lake trout) population, parasitic sea lamprey entering the lake during spawning season, and potential negative impact on the tax base of Palermo from fluctuating water levels.

Vehement opposition to this controversial bill was in clear evidence. Proponents of L.D. 922 made it clear that they did not think that there would be any problems with opening the fishway during spawning season. During testimony, it emerged that there have been no recent environmental impact studies done for Sheepscot Lake. Thus, it is not known how damaging this proposed opening would be, to either the lake or the fish rearing station. After hearing the lengthy testimony presented to them, the Marine Resources Committee members adjourned, having set a date for an upcoming workshop to vote on the bill.

On February 14, the committee reconvened to discuss L.D. 922. Much written testimony had been given to each legislator and a lively debate ensued. Proponents of the bill felt that opening the fishway during spawning season would not pose a significant risk to the fish rearing station, nor would it negatively impact the deep water fishery or the recreational use of the lake. Written testimony from the opposing side, the citizens of Palermo, contained specific information about past history with the fishway having been opened during spawning season in the era of the late ‘60s, and ‘70s. A proliferation of sea lamprey, who were unable to get out of the lake after spawning, attacked both salmon and togue. According to a written document from Inland Fish and Wildlife, deep water fish caught during this time were scarred with multiple wounds from sea lamprey. More information from Inland Fish and Wildlife outlined the high cost of equipment that would have to be installed in order to protect the rearing station from potential viruses and pathogens, if the alewives and sea lamprey were allowed to enter the lake. After much deliberation, the committee voted 8 – 4, ought to pass. At this point, the bill will be forwarded to the legislature for more debate and a vote.

It should be noted that the Maine Governor, Paul LePage, has written a letter to the Commissioners of Marine Resources and Inland Fish and Game asking them to keep the fishway as it is now, requesting that other bodies of water could be used for raising and harvesting alewives.