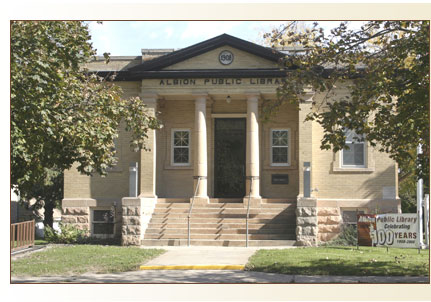 The majority of the central Maine towns and cities this series is covering have public libraries. Previous articles have talked about the three whose buildings are on the National Register of Historic Places – Lawrence Library, in Fairfield (the Nov. 11 issue of The Town Line), Lithgow Library, in Augusta (Nov. 18) and Brown Memorial Library, in Clinton (Dec. 2).

This piece will describe other local libraries your writer finds interesting, mostly arranged alphabetically by town.

A digression is in order here to explain different concepts of “public library.”

The clearest version of “public” is a library that is owned by the municipality, run by a staff who are municipal employees and funded (mostly) by taxpayers. Augusta’s Lithgow Library is in this category; its website calls it “A Bureau of the City of Augusta, Maine.”

Lawrence Library, in Fairfield, is similarly described as “a department of the town of Fairfield.” It has a five-person advisory board (if the website is up to date, there are two vacancies).

Clinton’s Brown Memorial Library is one of the departments listed on the town website. The website lists three trustees.

Each of these libraries has a separate Friends group whose mission is to seek donations.

Another type of “public” library is a library that lets everyone borrow its books and other resources, free of charge, and is owned and run by a private association, normally headed by a board of trustees or other similarly-named group. The Albert Church Brown Memorial Library, in China Village, and the South China Public Library are examples of this organizational type.

Little Free Library is a 21st-century organizational form that will be described in the next article in this series, with local examples.

Albion, the town immediately north of China, seems to have used two other forms of library organization for two successive institutions, one started in 1864 and the other in 1981.

Albion’s 19th-century library represented the type of library that is not truly public, but is at least partly financed by, and its services offered only to, dues-paying members. For the Albion Division Library, organized April 19, 1864, the dues were nominal; some member-supported libraries have charged significant fees.

Ruby Crosby Wiggin wrote in her Albion town history that a share in Library of Albion Div. 55 cost a man 50 cents a year, and required him to sign the library’s constitution and bylaws. Women, identified as “Lady Visitors” rather than members, also had to sign the documents, Wiggin wrote; they were charged 10 cents every three months.

The Division apparently met at least monthly, because Wiggin wrote that books “could be taken out or returned only at regular meetings.” Rules limited each member to one book at a time, with a four-week maximum borrowing time before a fine was incurred. But, she wrote, books could be renewed, and librarians’ records showed members keeping a book “for nearly a year by returning it each month and then taking it out again.”

Wiggin’s history includes the names of the first 17 men who joined the library in 1864 and 1865, and the five women who took out books at the first Division meeting. She also listed the 46 books in the original collection, a mixture of fiction and non-fiction that included a few names familiar to 21st-century readers, like Longfellow’s Tales of a Wayside Inn, Robert Burns’ poems, Francis Bacon’s Essays and George Eliot’s The Mill on the Floss.

The library’s non-fiction collection included travel books by Peter Sutherland and Bayard Taylor; both volumes of Joel Tyler Headley’s 1847 Washington and His Generals; and a three-volume history of Turkey. Fiction included Ten Nights in a Bar Room and What I Saw There and several other novels by Timothy Shay Arthur.

Wiggin talked about the library’s first two years, but said nothing about when or why it closed.

The present Albion Public Library, dating from 1981, is an organizational hybrid. The town website says it is “a 501 (c) (3) charitable organization, an Agency of the Town of Albion, Maine.”

Organization Treasurer Richard “Rick” Lawrence explained that Flora Wing Champlin created the public library in 1981 in a corner of the Albion School library, with permission from the School Administrative District #49 directors. What was initially “a brave band of informal trustees” organized in 2001 as a 501(c)(3) nonprofit trust.

Between August 2001 and February 2002, Lawrence said, the trustees raised money to build a single-story library building at 18 Main Street (Routes 202 and 9), on a lot “cheerfully” donated by Roddy and Hattie Robinson. They then signed an agreement with town officials giving the Town of Albion ownership of the land and building, with the trustees to run the library.

In the last two years the trustees have expanded the library by adding a connector building between the main library and a storage room to the south. Lawrence said the project cost about $234,000, of which less than 10 percent came from town meeting voters’ approval of special requests.

The Town of Benton currently has no public library, and neither on-line sources nor Kingsbury’s 1892 Kennebec County history record one in the past. Kingsbury, however, would not take this lack as a criticism of the town. He wrote, “The intellectual status of a community may be generally premised from its educational facilities, and in this respect Benton compares favorably with her sister towns.”

Benton Elementary School library has its own cheerful website. Town residents are eligible for the Maine State Library’s Books by Mail program.

The Town of China has two libraries. The story of the South China library follows; the Albert Church Brown Memorial Library, in China Village, was described in the Dec. 2 issue of The Town Line. 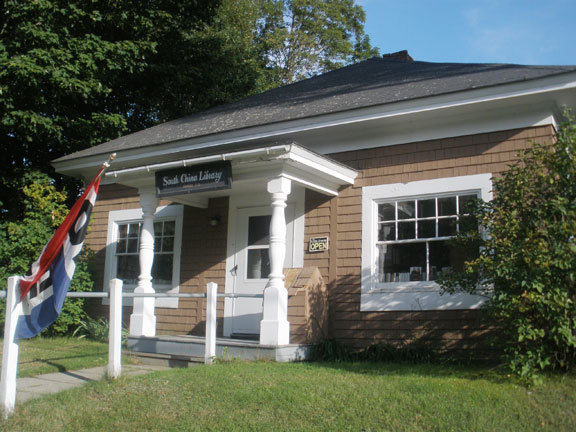 The South China Library, founded in 1830, justifiably calls itself “Maine’s oldest continuously operating public library.” It was mentioned in the July 1 issue of The Town Line for its 20th-century connection with Rufus Jones.

According to the China bicentennial history, a group of South China men met in January 1830 “at the Chadwick schoolhouse” (near the present Erskine Academy, south of South China Village) and created the South China Social Library Society. (Kingsbury gives the year as 1832.)

The history quotes the organization’s goals: “improving our leisure hours to advantage; cultivating science in the community at large; and encouraging the present and rising generation in the same worthy pursuits.” Membership was sold in shares at a dollar each, and more shares could be “bought” by donating books. Borrowers were limited to one book at a time, unless they owned more than one share.

The bylaws allowed members to gather whenever they chose to discuss literature “not inconsistent with virtue and decorum.” For at least the first four decades the library reportedly accepted only non-fiction; the history mentions a paper presented to an 1870 meeting “commenting on the increasing public taste for ‘worthless’ fiction.”

Kingsbury wrote that the library did well. A $96 25th-anniversary gift from “Samuel Gurney, of London” (Kingsbury did not explain how a Londoner knew there was a library in South China, Maine), “gave fresh impetus,” he wrote.

(Wikipedia profiles a British philanthropist named Samuel Gurney [1786-1856] and mentions his son, also Samuel Gurney [1816-1882], but does not associate either with libraries or Maine. The younger Samuel Gurney, also a philanthropist, was co-founder of the Metropolitan Free Drinking Fountain Association, created in 1859 to give London people free, safe drinking water. In 1867 it was extended to animals and renamed the Metropolitan Drinking Fountain and Cattle Trough Association.)

The South China library’s books were housed in second-floor rooms above Ambrose H. Abbott’s store (he was the second librarian, from 1836 to 1866, succeeding Constant R. Abbott [almost certainly a relation, but on-line genealogies were not helpful]). In April 1872 a major fire destroyed most of South China Village, including Abbott’s store and the library’s 500 or so “choice” (Kingsbury’s word) books.

When the library reopened the next year, the China history says Eli Jones was president of the association. The library re-started with 80 books “and $6.58 in the treasury.”

Kingsbury wrote that the reopened library was free to all, supported by “subscriptions and donations.” In 1892, it was housed in the South China Friends’ meeting house and open on Sundays and Thursdays.

In 1900 Wilmot R. Jones donated the small lot on the south side of Main Street where the library has lived since, and the association had the building put up. Wilmot Jones was library association president from 1899 to 1919, and Rufus Jones from 1919 to 1948, according to the China history.

In the summer of 2016, library trustees bought the 1815 Abel Jones house on Jones Road, within half a mile of the original library building. The house has been on the National Register of Historic Places since 1983 (see The Town Line, July 8).

The Jones lot is large enough to accommodate a new library building, now under construction.

The China bicentennial history counts the former Dinsmore Library, in Branch Mills Village, as a third library in China. Geographically it is on the China side of the town (and county) line that runs through the village. Nonetheless, in this series it will be treated as a Palermo library, and will be described in the next article.

A superficial on-line search has found China is not the only Maine town with two separate libraries.

The Town of Kennebunkport has the Cape Porpoise Library and the Louis T. Graves Memorial Public Library (originally the Kennebunkport Library, renamed to honor donors in 1921). The Graves library’s two-story brick Federal-style building dates from 1813; it was the United States Customhouse from 1831 into the 20th century, with the town library on the second floor after 1898, and has been on the National Register since 1974.

The Town of Standish has the Richville Library and the Steep Falls Library. The latter, opened in 1917, was for many years the Pierce Memorial Library, in honor of donor Henry Pierce. Its brick Colonial Revival building, designed by Edward F. Fassett (son of Francis H. Fassett; see The Town Line, Feb. 4), has been on the National Register since 2004.

FOR YOUR HEALTH: Wisdom Teeth Removal: Why, When And HowOBITUARIES for Thursday, December 9, 2021
Scroll to top