On a blustery Monday morning, April 26, around 50 people gathered in Vassalboro’s Monument Park to celebrate the 250th anniversary of the town’s founding and rededication of its Civil War memorial.

The event was organized and emceed by John Melrose, chairman of the Vassalboro selectboard.

“On behalf of the Vassalboro selectboard,” Melrose said to open the ceremony, “I join you today in commemorating the 250th anniversary of our town, as we also recognize three years of work at Monument Park to celebrate this event.”

There have been numerous improvements made to the park over the past several years, including a clean-up along the shoreline, installation of paving stones surrounding the Civil War memorial, the planting of trees, decorative bushes and other landscaping improvements, and a newly-installed granite plaque dedicating the park for the town’s 250th anniversary. 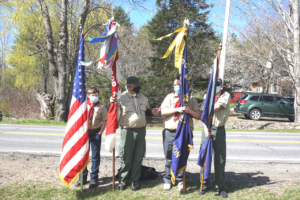 Vassalboro Boy Scout Troop #410 led the gathering by presenting the colors and reciting the Pledge of Allegiance. (photo by Eric W. Austin)

Vassalboro Boy Scout troop #410 then performed a presentation of the flags and led the gathered group in a recital of the Pledge of Allegiance.

After a prayer and invocation from American Legion chaplain Pearley Lachance, the first presentation of the morning was given by Patsy Crockett, president of the Kennebec Historical Society and member of the Kennebec County Commissioners. She stated, in part, “April 26, 1771 is the date that the Massachusetts’ colonial government incorporated four area communities as municipalities: the city of Hallowell, the towns of Vassalboro, Winslow and Winthrop. They remained part of Massachusetts until Maine achieved statehood in 1820.”

Crockett continued: “Beyond sharing the same date of incorporation, the four communities have at least one other thing in common: they all originally covered a larger territory than they do today. In fact, combined, they occupied nearly half of what is now Kennebec County.”

Vassalboro was named after the Vassal family, she said, and was originally spelled “Vassalborough,” although the shorter version of the name became standard by 1818.

At the end of her speech, Patsy Crockett presented the town’s selectboard with a resolution from the Kennebec County Commissioners in recognition of the 250th anniversary of the founding of the town of Vassalboro.

The next presenter was Janice Clowes, president of the Vassalboro Historical Society, who spoke about the history of the site. In part, she said, “Today we stand in Monument Park, a focal point for our community. For hundreds of years, this site and its immediate surroundings was a meeting place for those who inhabited what became Vassalboro. From our exhibits at the Vassalboro Historical Society you can come to realize how important this land at the outlet of China Lake was to the Native Americans. Later, with colonization, we know of the importance of the alewife runs at this location and downstream and how the stream powered our development in commercial enterprises.”

Lauchlin Titus, a local historian who has also served on Vassalboro’s school board, budget committee and on the selectboard, was the last presenter of the morning. He spoke about the history of the names that are listed on the Civil War memorial. Much of his talk was included in a front page article he authored that was published in The Town Line issue for April 22, 2021.

Repairs are also planned for the Civil War statue. “It was commissioned in 1905 and dedicated in 1907,” Janice Clowes explained. “[Based on] design number 407, ‘Parade Rest,’ [it] was carved by William Tregembo, of Hallowell, for the sum of $1,275, with $300 as a deposit and the remainder when the monument was completed. The base of the monument is made from Hallowell granite, while the soldier is made of Westerly granite from Rhode Island. As you may know, plans are underway to have the nose and two places on the cape repaired. The additional repair to the rifle is estimated to be more than $20,000, therefore only the other repairs will be completed.”

A video stream of the event, uploaded by David Trask, is available on Youtube at the following link: https://youtu.be/7MpFPMCFcBg.

FOR YOUR HEALTH: Baby Boomers Still Playing Together Even “Party Gaming”... CHINA: Broadband costs big unknown at this point
Scroll to top