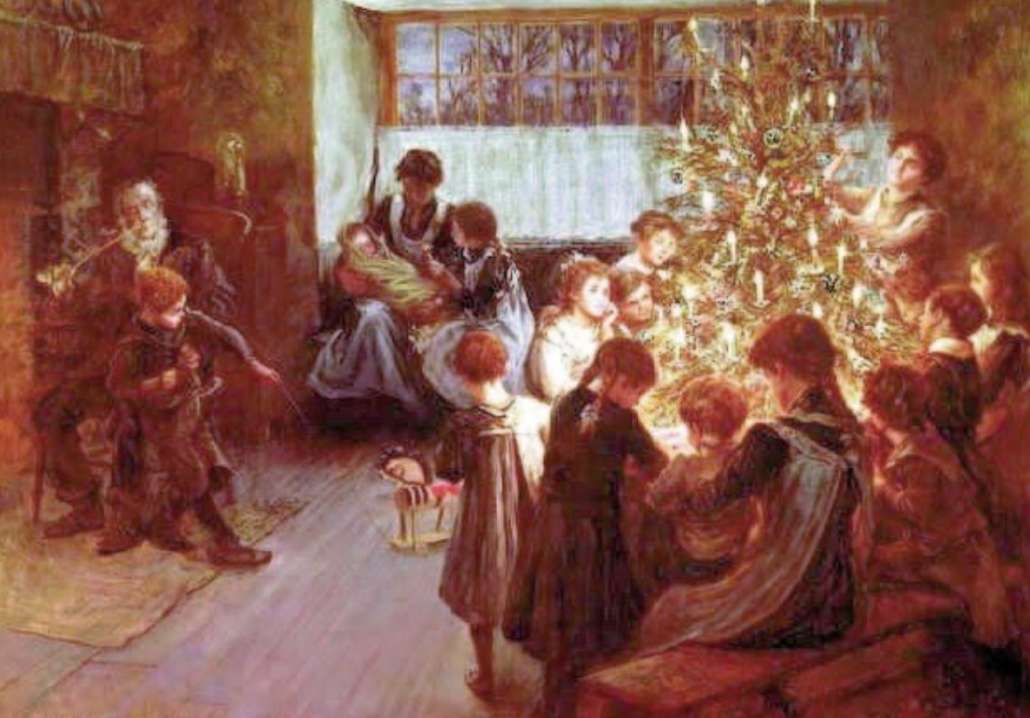 The Christmas holiday grew in popularity after the Civil War. Certainly, the message of peace and goodwill resonated with Americans who yearned for reconciliation and unity. (photo from the book, Christmas in the 19th Century, by Bev Scott)

This article is intended to complete the survey of pre-20th-century social activities in the central Kennebec Valley and, given the current date, to report on Christmas observances.

An organization omitted last week, but covered earlier in this series (see The Town Line issues of April 8 through May 13, 2021), was the Patrons of Husbandry, the farmers’ organization commonly called the Grange. All of the dozen towns and cities covered in this series had at least one Grange; according to the Maine State Grange website, Benton, Fairfield, Palermo and Vassalboro are among 98 Maine towns that still do.

The history of Waterville’s Grange is lost. Edwin Whittemore’s 1902 Waterville history said the Waterville Grange once existed, named three members and concluded, “It is long since defunct.”

The April 8, 2021, issue of The Town Line listed 19 local Granges, including three each in China and Vassalboro and two each in Albion, Augusta, Clinton and Palermo, founded between 1874 and about 1974.

While farming remained prominent, the Grange was a center of social activity, especially in smaller towns. Meetings provided education as well as entertainment, and several Granges had stores where they sold essentials, bought in bulk, to members at discount prices.

In addition to organizational activities, residents had other types of entertainment. Windsor historian Linwood Lowden mentioned minstrel shows, put on by different groups beginning in the 1860s.

He also cited a local diary: “On Monday night, March 29, 1886, the Weeks Mills Dramatic Club performed at Windsor Four Corners. The performance was followed by a ‘sociable.'”

On the west side of the Kennebec, historian Alice Hammond found an advertising poster for the Sidney Minstrels’ Grand Concert on Thursday, Aug. 18, 1898. The location is written in; the cursive script has faded to illegibility.

Vern Woodcock, Boston’s Favorite, had the largest headline; he was described as “the Celebrated Guitarist, and Beautiful Tenor Balladist, in his Comic and Sentimental Songs and Character Impersonations.” Also to perform were Happy Charlie Simonds (“the Merry Minstrel, the Prince of Ethiopian Comedians, and the Champion Clog Dancer of the World”) and other comics and musicians.

The Fairfield history added roller skating to 19th-century local recreational activities. Citing a journal written by a local businessman named S. H. Blackwell, the writers said the roller rink was on Lawrence Avenue, where the telephone company building was in 1988. People of all ages and groups from out of town came to skate. 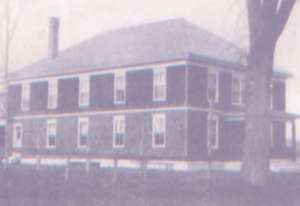 The China Grange, in China Village.

The China bicentennial history includes a list of available spaces for social gatherings in three of the town’s four villages. In China Village in the early 1800s were “Mr. [Japheth C.] Washburn’s hall and General [Alfred] Marshall’s inn.”

Until the major fire in 1872, there was a three-story building in South China that prominent Quaker Rufus Jones described as a meeting place. Barzillai Harrington’s school building in China’s part of Branch Mills and “the meeting room over Coombs’ store” were available “in the last half of the nineteenth century.”

In Clinton, Kingsbury said, John P. Billings built Centennial Hall, on Church Street, in 1876, apparently as a public hall. He sold it to the Grange in 1890; in 1892, the Grangers used the ground floor and the second floor was “used for exhibition purposes.”

Milton Dowe wrote that Palermo’s “first known building for recreation” was on Amon Bradstreet’s farm, described as between Donald Brown’s land (in 1954) and Sheepscot Lake. Dances were held there until the hall and farm buildings burned about 1890.

In Branch Mills Village, Dowe said, the large hotel east of the Sheepscot and north of Main Street (where the Grange Hall now stands) had a dance hall on the second floor of the ell. Behind the hotel was a dance pavilion. Both were destroyed in the 1908 fire that leveled the entire downtown.

In her Vassalboro history, Alma Pierce Robbins mentioned that the big schoolhouse on Main Street, in North Vassalboro, was used for “‘benefit’ gatherings of many kinds” from the time it was built in 1873, though she gave no specifics before the 1960s.

Sometimes the weather – or a person’s mood – forbade socializing. Lowden’s history has a paragraph titled “B.T.V. (Before Television),” in which he talked about books people could read and reread during long evenings, based on inventories he reviewed.

Some families had no books, he wrote. If there was only one, it was a Bible.

A relatively well-off resident named Reuben Libby, who died around 1814, had four books plus a pamphlet (subject not given). The books were a Bible; a dictionary; Young Man’s Best Companion (also called The American Instructor, described on line as first published in 1792 and offering an easy way to teach spelling writing, reading and arithmetic); and a book described as a “selection” – Lowden did not know whether it was poetry or prose.

Benjamin Duren’s 1814 inventory listed a Bible and a dictionary, two geography books, an arithmetic book and two unnamed others.

A former sea captain’s 1831 inventory listed two nautical books, the American Coast Pilot (first published in 1796) and Bowditch’s American Practical Navigator (first published in 1802, though there were earlier versions from 1799), plus The Poets of Great Britain Complete from Chaucer to Churchill (the work is described by Wikipedia as 109 volumes, published by John Bell between 1777 and 1783; Lowden did not say whether the set was complete).

Christmas was not much of a holiday in the 19th century, according to the few local accounts your writer found.

In Lowden’s history of Windsor, he used diary entries from the 1870s and 1880s to support his claim that “Mostly it was a quiet day at home.”

The longest account is from the diary of Roger Reeves, a farmer and carpenter. In 1874, Lowden learned, Dec. 24 was a cloudy day with rain that turned to snow; nonetheless, Reeves traveled to Augusta and spent $1.50 on Christmas presents.

Christmas day Reeves “spent the day making picture frames in his shop, doing his regular chores, and otherwise busying himself about the place.” That evening, he joined people gathered around a Christmas tree at Tyler’s Hall to exchange presents, enjoy an “antiquarian supper,” sing and socialize.

(Albion historian Ruby Crosby Wiggin also came across such a supper, though it was planned at a Feb. 8, 1878, Grange meeting, not associated with Christmas, and was in the meeting report spelled “antignarian” – to Wiggins’ delight.

Wiggin consulted her Webster’s dictionary and found that “gnar” meant [and still means, though the web offers additional meanings] “to snarl.” “Anti” means against; so she concluded approvingly that “antignarian” had to mean “not snarling but friendly or smiling.”)

Orren Choate (June 20, 1868-1948), another Windsor diarist, spent Christmas 1885 “at home with his parents,” identified on line as Abram and Adeline (Moody) Choate. They had company in the afternoon.

Christmas evening, Choate skipped a Christmas dance in South Windsor because he didn’t want to drive that far in the cold. Instead, he and his father spent the evening playing cards at the home of his father’s younger brother, Ira Choate.

In Vassalboro, one of the women’s clubs Alma Pierce Robbins mentioned in her town history was the Christmas Club on Webber Pond Road, “where the women met for sociability and sewing for Christmas.” These meetings were held all year at members’ houses, she said; but she gave no indication of when the club was founded or how long it lasted.

Another source of Christmas information was Revolutionary War veteran and Augusta civic leader Henry Sewall’s diary, as excerpted in Charles Nash’s Augusta history for the years 1830 to 1843.

Sewall was a Congregationalist who attended church regularly. He often participated in religious exercises on other days, like the four-day meeting in May 1831 that began daily with a 5:30 a.m. prayer meeting and ended around 9 p.m. after the evening lecture.

Sewall’s 1830 diary entry for Dec. 25 identified the day as Christmas and reported on the warm rain that broke up the ice in the Kennebec. Dec. 25, 1834, had another weather report; the temperature was eight below that Christmas.

In 1832 Dec. 25 was a Tuesday (according to on-line sources). Sewall called the day Christmas and wrote that he listened to Rev. Mr. Shepherd’s “discourse” proving the divinity of Christ.

Four of the entries strike an odd note, and are not explained in Nash’s book. On Dec. 25, 1838, and again in 1839, Sewall wrote merely, “Christmas (so-called).” He expanded on the theme in 1841, writing, “Christmas, so-called, which was employed here in consecrating St. Mark’s church, for their future worship.”

(St. Mark’s Episcopal congregation organized in 1840; Wikipedia says the first church was a wooden building just north of the present Lithgow Library. James North wrote in his Augusta history that the cornerstone was laid July 4, 1841, and the building was first used for worship that Christmas. Construction cost was $6,248; the church was 46 by 85 feet with a 110-foot tall “tower and spire.”)

North, in a biographical sketch, commented that Sewall was “pious and rigidly orthodox in his religious views. Towards the close of his life his religious rigor was much softened.”