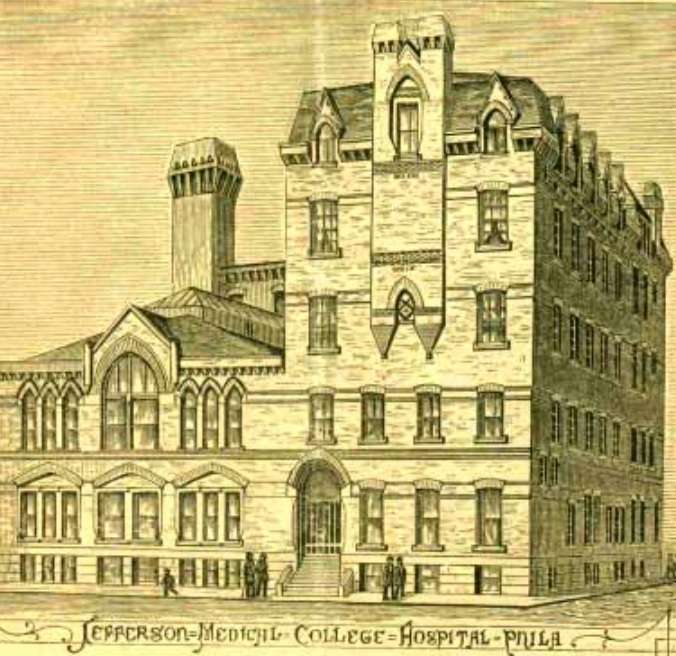 As promised last week, this week’s article will feature random information about three more central Kennebec Valley doctors with degrees from Jefferson Medical College, in Philadelphia. Their names were Cyrus Kendrick, Class of 1850, who practiced in Litchfield; James E. Tuell, Class of 1884, who practiced in Augusta and who started this topic; and Lewis King Austin, Class of 1894, who practiced, at least briefly, in Waterville.

Kingsbury wrote in his chapter on the medical profession in his Kennebec County history that Cyrus Kendrick (Sept. 26, 1825 – 1904) was born in Gardiner, the third son and fifth child of Cyrus and Sarah (Maxcy) Kendrick.

Dr. Kendrick’s father, the first Cyrus Kendrick (1789-1866), was a Gardiner businessman who was a justice of the peace for many years and served as town selectman in 1837 and as treasurer in 1848 and 1849. He was an active Mason (as was his doctor son), and he and his wife were “prominent members of the Baptist church” in Gardiner until they moved to Litchfield, where they died.

Dr. Kendrick went to local schools, spent two years at the medical school at Bowdoin and – for unknown reasons – transferred to Jefferson, where he was one of a class of 211 new physicians who graduated in March 1850.

Kingsbury wrote that after two years in Gardiner, Dr. Kendrick moved his practice to Litchfield, where he still was when the Kennebec County history was published in 1892. He was among the founders of the Maine Medical Association in 1853, and a member of the American Medical Association; Kingsbury noted that he “participated in” the 1884 AMA annual meeting in Washington, D.C.

In 1880 Dr. Kendrick married a Litchfield Academy teacher named Susan (often listed as Susie) P. Howe (May 13, 1848 – 1928), from Rumford. The couple had two daughters, whose names Kingsbury gave as Daisy May (probably an error) and Kate H., and a son, Cyrus Maxcy Kendrick.

A list of Bates College graduates in the Class of 1904, found on line, includes Susan May Kendrick, born Jan. 29, 1881, in Litchfield, to Dr. Cyrus and Susan (Howe) Kendrick. The entry says she taught high school in Dexter and South Paris and at Monmouth Academy and Mattanawcook Academy (in Lincoln) from 1904 through 1915, with the longest stint, six years, in South Paris.

A similar list for Bates’ Class of 1910 includes Cyrus Maxcy Kendrick, born Jan. 26, 1888, to the same parents, and also an educator who moved from place to place. A January 1908 Bates student publication lists him among sophomores who were “out of college teaching” during the first weeks of the semester.

He married again, to Erma Jean Hayden; they had several children. The obituary gives details of his military service and lists medals he received, starting with two Bronze Stars. It says he worked for the state highway department for 41 years, most of the time as “foreman of the paint crew.”

Tuell’s graduation from Jefferson was on March 29, 1884. The graduation program says his thesis topic was “Acute Rheumatism.”

(Nason, from Standish, was a Colby University graduate, Class of 1880. The April 27, 1878, issue of the Portland Daily Press reported that he received second prize in the sophomore prize declamation; the 1880 Colby Oracle listed him as a member of the Chi Chapter of Zeta Psi fraternity.

Of the 215 Jefferson graduates in 1884, 109 were from Pennsylvania; there were three Canadians and five other men from five different countries, listed as England, Italy, Mauritius, West Indies and Armenia.)

Dr. Tuell’s first medical work was apparently in East Machias, and started before his graduation from Jefferson. The Maine State Board of Health’s first annual report, found on line, covers the fiscal year that ended Dec. 31, 1885; Dr. Tuell was the “medical correspondent” from East Machias.

His report began: “Our leading diseases are pneumonia, ileo-colitis, cholera infantum, sporadic cases of typhoid fever, an occasional case of diphtheria, and the various exanthemata peculiar to childhood.” (Exanthemata, according to an on-line dictionary, is a plural noun; an exanthema is “a skin rash accompanying a disease or fever.”)

He went on to mention one epidemic each of scarlet fever and diphtheria in the last 20 years; typhoid fever, up to the last two years, sometimes “widespread enough, in certain parts of the town, to be styled a local epidemic”; and three cases of smallpox.

Phthisis (tuberculosis) was common, Dr. Tuell wrote. It was hereditary, he said, and flared up due to “climate, dampness, poor ventilation.”

In August 1883, he wrote, he had treated a young man with all the symptoms of scarlet fever, though the patient’s mother was sure he had not been exposed to anyone with the disease. Dr. Tuell learned that the patient’s sister, working out of town, had scarlet fever in February. In April she sent home some clothes; and two weeks before her brother got sick, “the sister took a garment from the trunk and ripped it apart for the purpose of repairing it.”

Part of the medical report was an evaluation of the local school buildings. In East Machias, Dr. Tuell wrote, “we have imperfect ventilation and unsuitable heating apparatus; consequently, headache is frequent.”

Information about Dr. Tuell’s private life is scant. He apparently married twice, first to Sarah Elizabeth, with whom he had three children, and then to Nellie Sarah Quimby.

The auditor’s report in the Augusta annual report for the year ending March 1, 1896, listed Dr. Tuell as billing $66.50 to the account labeled “support of the poor.” His was one of the three largest bills, suggesting city officials called on him comparatively often.

It was on July 3, 1896, that fire destroyed his office in downtown Granite Hall.

A 1940 census record found on line shows Sarah D. Tuell, born about 1890, living at 71 Winthrop Street, in Augusta, with her mother, Elizabeth B. Tuell, who was then aged 75. The Find a Grave website lists seven Tuells buried in Augusta’s Mount Pleasant Cemetery:

Lewis King Austin (Aug. 11, 1869 – Oct. 21, 1952) was a Portland native, according to Dr. Thayer’s chapter in Edwin Carey Whittemore’s Waterville history, supplemented by on-line sources. His parents were William King and Sarah Eliza or Elizabeth (Thomes or Thomas) Austin; he had two sisters and two brothers.

Thayer wrote that Dr. King specialized in “diseases of the eye, ear, nose and throat.” After his 1894 graduation from Jefferson, he practiced in Portland, Deering and Clinton before moving to Waterville in 1902 and opening his office at 145 Main Street. (Deering was incorporated as a town in 1871; it became part of the City of Portland in 1899.)

Dr. Austin married Mary Elizabeth Libby; they had a daughter, Estelle. The 1940 census showed him back in Portland; he was perhaps in a home for the elderly, as the “household members” section listed 92 people, the oldest aged 86.

He is buried in Portland’s Evergreen Cemetery. Nearby is the grave of Mary L. Austin, who died Nov. 29, 1951.

Dr. Austin was one of two Maine men in Jefferson’s Class of 1894. The other, Joseph Albert Lethiecq, died in 1956 and is buried in Mount Desert’s Brookside Cemetery.