I have been an avid fisherman for the better part of the past five decades. I have fished for many different species, under various weather conditions with some unusual experiences. But I have never had one fall out of the sky…until this week.
Now, I know recreational marijuana use is legal in Maine, but I swear on my mother’s grave I don’t touch the stuff.

When I arrived home from work last Wednesday, there it was, on the walkway from my driveway to the side door, a yellow perch, completely intact, with rigor mortis very well established. Since my hands were full, I figured I’d go back out to take care of it later. 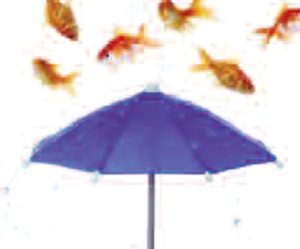 The fish had disappeared, just as quickly as it had appeared. Strange to say the least.

Since I live about 400 yards from the Kennebec River, where there is a large population of sea gulls, crows, and a nesting pair of bald eagles, I figured one of them may have inadvertently dropped it during a mid-flight skirmish with another bird over the fish. I have witnessed such encounters in the past. Why it stayed there for two days before being reclaimed, or discovered by another bird, or even ground animal, is a mystery.

With that in mind, I have received the first fishing report of the season from Mark Latti, of the Maine Department of Inland Fisheries and Wildlife for our region.

The report, dated April 21, states the Belgrade Lakes are still ice bound except for some places where open water exists. I would think, though, that by now, they are probably free of ice. Anglers are catching up to 19-inch rainbow trout in Long Pond.
In our area, the best spot right now for landlocked salmon and brown trout is at Lake St. George, in Liberty, according to IF&W biologist Jason Seiders.

Alford Lake, in Hope, is another place to visit this time of year. Reports from there indicate brown trout in the eight pound range, according to trapnetting that was conducted last fall. Seiders thinks there may be some even bigger ones this spring. Also, humpback white perch, ranging up to two pounds, have been caught.

With the spring runoff, many area streams are overflowing their banks, making fishing a little difficult right now. Messalonskee and Belgrade streams have not yet been stocked, but should be in the near future.

A little further north, below the Wyman Dam, reports are showing excellent early season fishing of salmon and rainbow. IFW staff “conducted creel surveys there and interviewed one group that caught 20 salmon, and released all but one,” according to Seiders.

Also, taking into consideration the past history, the alewives should begin to run at the dam on Webber Pond during the first week or two of May.

Open water fishing is well underway – I saw a couple of bass fisherman on China Lake this week – so it’s time to get the gear out, prepare the boat, and head out on the great Maine lakes and streams, but keep an eye out above.